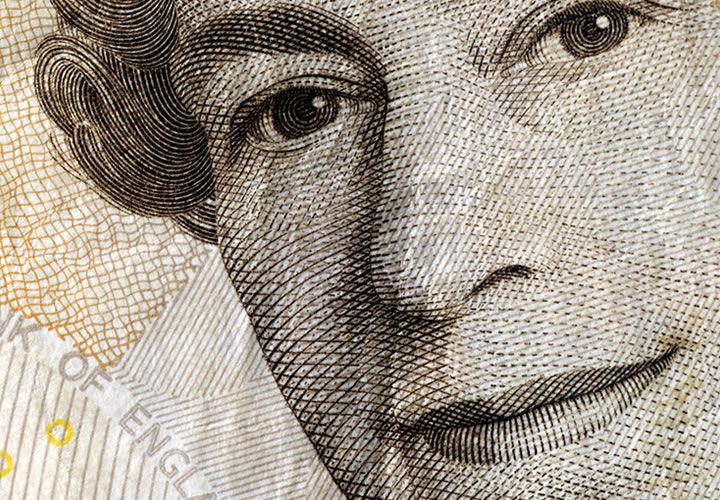 The Pound to Dollar exchange rate edged off its week highs on Friday, April 21 after UK retail sales data gave us their worst reading since 2012.

The data dented optimism somewhat in Sterling which was the week's best-performing G10 currency.

However, the pull-back in GBP/USD is relatively shallow and in no way matches the strength of the rise prior to it.

Historically this sort of shallow pullback does not normally lead to a reversal of trend and is more likely to signal a slowdown, a pause, a ‘bump’ in the road higher.

Chart watchers are generally remaining quite positive about the Pound to Dollar exchange rate’s trajectory higher.

“From a technical perspective, the GBPUSD is considered in a positive trend above 1.2600 (major 38.2% retracement on March – April rise),” says London Capital Group’s Ipek Ozkardeskaya.

"The market has eroded key short term resistance offered by the channel, the 200 day
moving average, the 1.2707 January high and the 1.2836 Long term Fibo resistances. The break looks directional and we will assume an upside bias above 1.2618 (200 day ma). We would allow for allow for further strength to the 55 week ma at 1.3012," says Jones in a client briefing.

Indeed, our own charts lead us to believe Sterling will look through the data and continue rising versus the Dollar.

For us, there is a tough level fo support at 1.2743 which we see as dividing a bullish from a bearish short-term outlook – assuming it holds we retain a very bullish outlook if it breaks we become cautiously bullish.

Technically, there is a, however, a lot of evidence pointing to more upside growth for Sterling.

The reason we are so bullish is that Tuesday’s election wrought ‘tsunami’ for the Pound coincided with a breakout from a large triangle pattern which had been forming on the chart since the October 2016 lows. 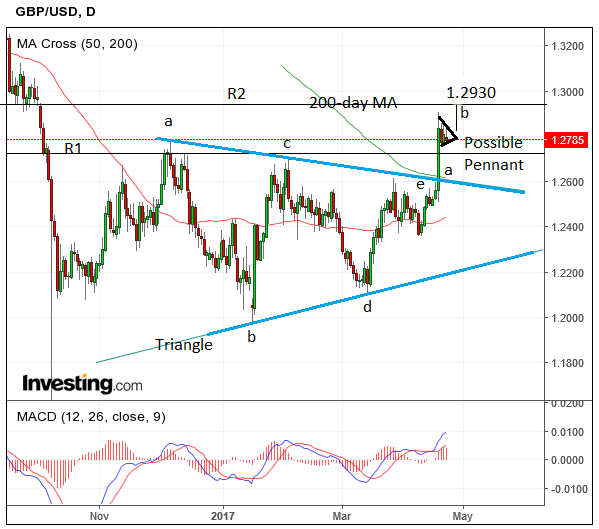 Such breakouts are clear bullish technical sigals; for a triangle, a target is generated based on the height of the pattern at its widest part extrapolated higher from the break.

The current pull-back from Tuesday’s 1.2909 peak may also be a formation called a pennant, which is a ‘half-way’ consolidation point on a move up, where the steep move prior to its formation is the ‘pole’ and the consolidation the ‘pennant’ as in medieval flag.

The target is found by extrapolating the pole ‘A’ higher from the pennant breakout in a move which is roughly of equal length ‘B’.

The R2 monthly pivot is expected to be a tough obstacle to further upside at 1.2930, however, so we have placed our short-term target there, however, eventually it probably will give way and lead to more upside to 1.3156, as predicted by the height of the triangle.

Sterling may also gain once the dust has settled from this morning’s retail sales figures as traders consider the proof in a calmer fashion.

There are provisos linked to the poor Retail Sales data, such as the fact that the data followed a particularly strong upwards trending period for sales, and therefore may be “overstating the weakness” due to starting from such a high base.

“These figures are likely to be overstating the weakness in overall household spending growth in Q1 – of which retail sales only makes up a third – with spending off the high street seeming to have held up rather better,” says Gregory in a note to clients released following the data release.

She also highlights supportive credit conditions and strong consumer confidence and reasons not get too worried about the data miss.

“We still think that overall household spending will only slow gradually this year – from 2.8% in 2016 to 2.0% in 2017 – rather than collapse outright,” she states in the note's sign off.

FXStreet’s David Cheetham also mentions, “ some mitigating factors which could be seen as meaning that this isn’t as bad news as it first appears.”

He mentions, for example, a pickup in Easter which should make April data better.

“Earlier this week we got more pertinent figures with several positive reports of a better than expected level of retail spending over the Easter weekend with Barclaycard reporting a 13% increase for in-store purchases on last Friday and Saturday.

He is overall positive about the outlook for the Pound, for similar reasons to us ie that the pull-back is too mild so far to signal a reversal.

“There has been a mild negative reaction in the pound which has fallen back below the 1.28 handle against the US dollar since the release but this data point alone doesn’t seem to present enough of a reason for the market to change course and price remains substantially higher on the week following Tuesday’s sharp rally and looks well supported going forward,” added the FXstreet analyst.