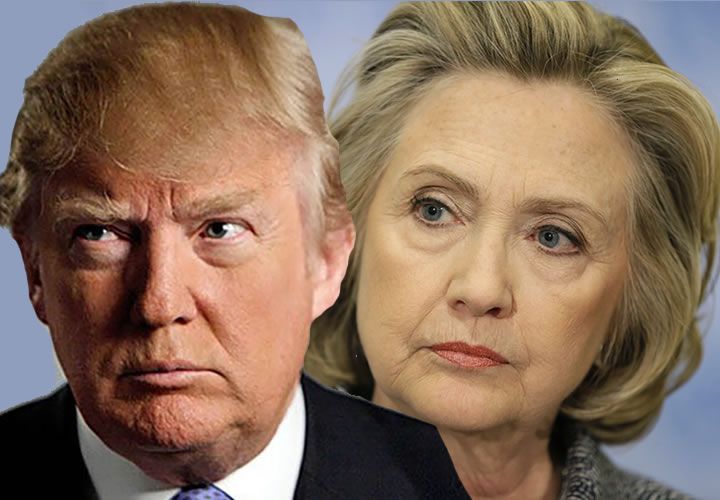 The first presidential debate ahead of the November elections has confirmed, for now at least, that the US Dollar will likely be sent higher on the prospect of a Trump victory.

The first highly-anticipated debate between US presidential hopefuls Clinton and Trump offered up some welcome volatility for foreign exchange traders.

The US Dollar fell and stock market futures rose as Clinton was crowned the winner.

The US Dollar index - a guage of overall Dollar strength - meanwhile fell amidst an uptick in investor sentiment.

The US Dollar remains one of the world's favourite safe-haven asset, so in times of uncertainty it tends to gain.

In times of confidence investors tend to buy stocks and sell Dollars, hence the risk-on reaction to the debate confirms markets like Clinton.

Betting markets indicate an increase in the probability of a Clinton victory from around 60% before the debate to close to 70% after the debate.

Furthermore, a poll by CNN found that 62% of viewers felt Clinton won.

But - this dynamic of the Dollar weakening on a Clinton advantage, and presumably strengthening were Trump to creep ahead - isn't guaranteed

“If the probability of a Trump victory increases in coming weeks, then you need to start questioning the Fed’s intentions for December, and you’ll want to reduce your exposure to, particularly, US equities and the dollar,” said Unicredit Chief Economist, Erik Nielsen.

Analysis from CIBC Market's Jeremy Stretch on the same theme also forecasts weakness for the greenback on Trump going ahead in the polls.

“Should recent Trump candidacy momentum be maintained through the debate expect trades which benefit from risk aversion to gain," says Stretch, adding, “although broad USD liquidity tends to see the USD perform well in risk aversion episodes we expect that the USD will prove to be a G3 under performer.”

Lloyds Bank’s Senior Economist, Rhys Herbert, sees the dollar’s current rally being brought to “a halt,” if there is an increasing risk of a Trump victory.

According to Herbert, “uncertainty” over the economy under Trumps stewardship is likely to hurt investment.

“At least in the short term the US dollar’s reaction against the other major currencies (including the pound) to a Trump presidency is likely to be negative,” he says.

Adding, “Uncertainty about whether Trump will follow up on some of his more extreme rhetoric is likely to increase at least initially the risk premium of holding US dollar assets.”

Nevertheless, in the current ultra-low yield environment an increase in risk premium could be a risk investors might be willing to take, especially given the US Treasury’s ‘special’ guarantee.

Like many other analysts Herbert sees a Trump win resulting in a fall in risk aversion which will hit the emerging markets, especially Mexico.

Longer term he sees an unclear outcome for the dollar, which could rise due to Trumps expansionary fiscal and monetary policy objectives:

“Indeed this independent policy role could lead to the Fed to raise interest rates more quickly under a Donald Trump presidency. This is because Mr Trump’s promise of tax cuts alongside spending increases particularly on infrastructure add up to a more expansionary fiscal policy than is currently in place.

“A combination of high interest rates and loose fiscal policy typically leads to currency appreciation and so the policy mix potentially points to dollar appreciation.”

According to Nordea bank’s Strategist Martin Enlund, the probable fall in global risk appetite attendant on a Trump victory will probably actually lead to an increase in dollar strength.

“Should Trump manage to stage a big-enough come-back in polls, we think the associated uncertainty would instead be USD-positive via an adverse hit to global risk sentiment as well as due to a greater implicit threat to world trade.”

He argues that over 60% of world trade is conducted in dollars, and we live in a ‘dollar-centric’ world.

Because of this fear of dollar weakness in the more uncertain world following a Trump victory would lead to more “asymmetric hedging” - where investors would buy dollars to hedge against a fall - and “USD funding mismatches” which would actually help the dollar rise.

To prove this he shows a chart of the USD index and Basis Swaps, which are a gauge of risk aversion.

The chart (see below) shows there is indeed a high degree of correlation between the dollar and heightened risk appetite/ lower risk aversion. 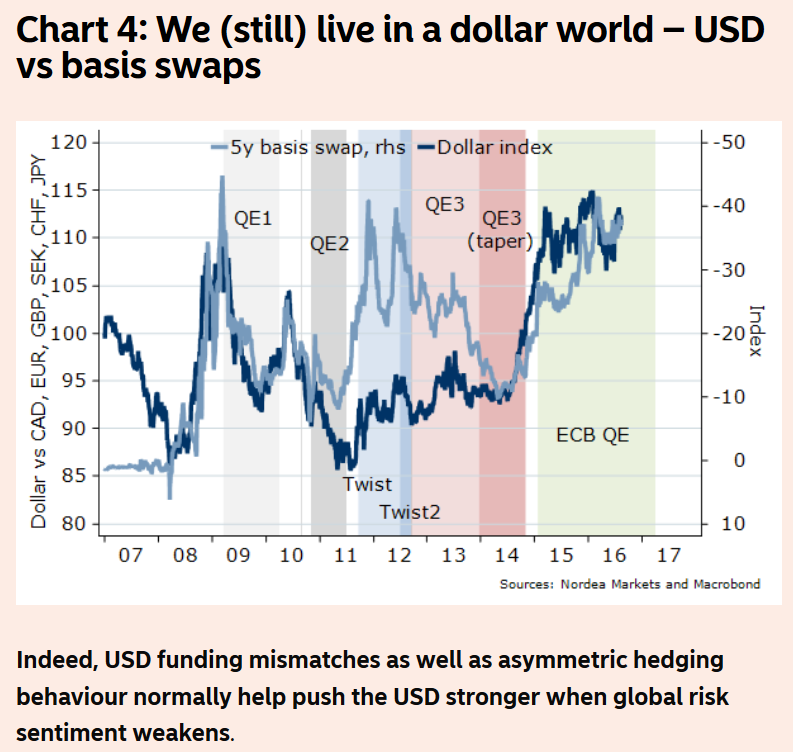 For those who think a Trump victory will lead to a recession, Enlund argues that even if that were so, the dollar would still be more likely to rise than fall since in the last 40 years, in “all recessions but one we note the USD has risen versus the EUR”.

Enlund also notes that the dollar will gain if markets fear the trade tariffs Trump has threatened to impose, as it will probably lower US imports which will narrow the Current Account deficit and see more net dollar demand.

If Trump triggers trade fears the USD would also likely strengthen along with more traditional safe havens such as CHF, JPY and EUR.

Enlund concludes that he sees mild dollar strength in the aftermath of an unlikely Trump victory.

“To sum up, in our base scenario we see a mildly USD-positive repricing of the Fed in coming months.

“Counter-intuitively we would expect to see surprising trade-weighted USD gains should Trump manage snatch victory from the jaws of defeat.

“No matter which, we expect EUR/USD to remain within its 18 month range.”

Lloyds: Pound Could Recover Against US Dollar on Trump Advantage

Adding his views to the debate on the USD outlook is analyst Adam Chester at Lloyds Bank who reckons any increased prospect of a Trump victory should aid the Pound against the Dollar.

National opinion polls and those in key ‘swing’ states have recently tightened up, with Republican candidate Trump ahead in some.

If he performs well in the televised debates a Trump presidency is likely to become a very real possibility.

"This could have a number of implications, not least on the value of the US dollar. Over the past two years we have seen sterling fall from a high of 1.70 versus the USD to its current level of close to 1.30," says Chester in a weekly client brief.

This year’s decline reflects in part general weakness in sterling but the bulk of the overall depreciation is also due to a more widespread rise in the dollar. "A Trump presidency could bring this to a halt", says Chester.