The Pound to Dollar exchange rate climbed back above 1.22 and approached the 1.23 handle in a rally that followed the release of data confirming U.S. inflation pressures eased further in October.

Thursday's reading of the Personal Consumption Expenditures Price Index (PCE) echoed the message of Bureau of Labor Statistics data released last month when suggesting that U.S. inflation fell back during the month of October even after changes in energy and food costs are taken into account.

The overall PCE price index dipped from 6.3% to 6% in annualised terms, aided by the smallest monthly increase for more than a year, and the more important Core PCE Price Index fell from 5.2% to 5% after removing energy and food items from the goods basket for which price changes are measured.

Both outcomes were in line with the economist consensus and also matched forecasts of the Federal Reserve (Fed), which tends to pay more attention to the Core PCE Index than it does any other single measure of inflation, though the Dollar from the continued drubbing

"Falling used vehicle prices and a smaller increase in rents accounted for much of the downshift from the 0.5% gains in both August and September; we think the modest October increase is a better guide to the trend," says Ian Shepherdson, chief economist at Pantheon Macroeconomics, in reference to the month-on-month inflation numbers. 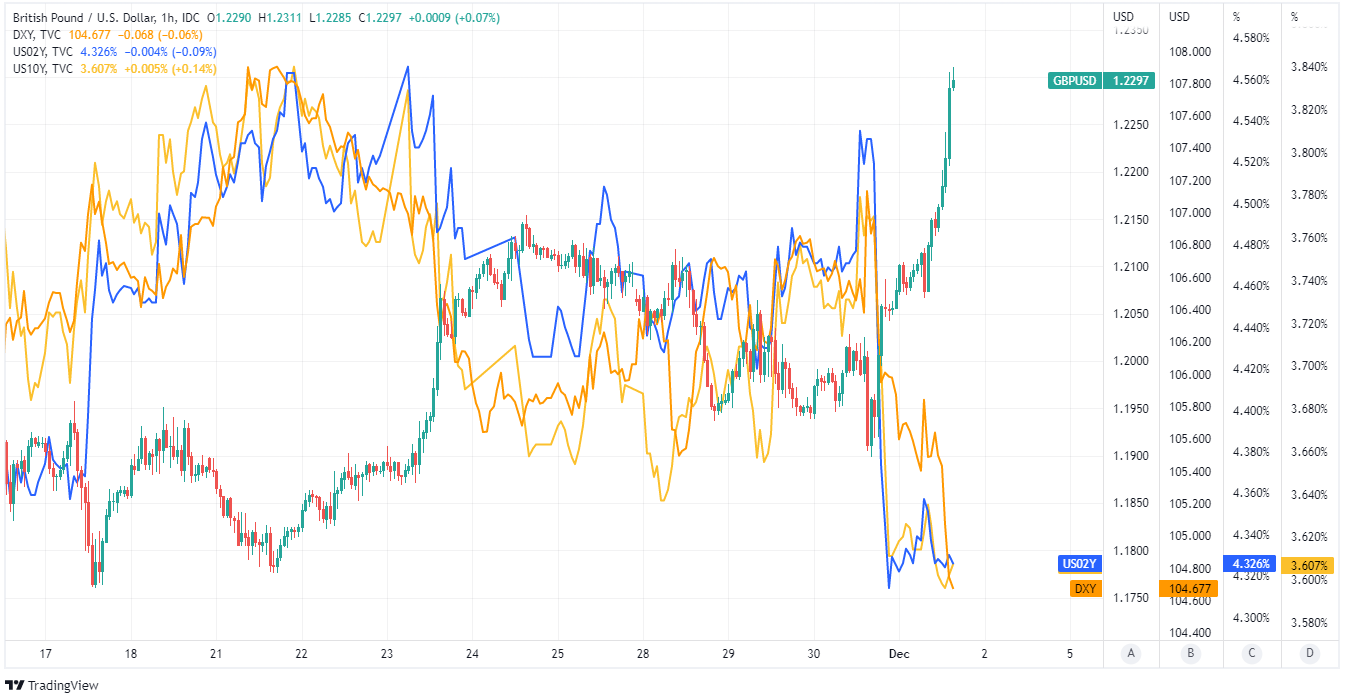 Above: GBP/USD at hourly intervals with Dollar Index as well as 02-year and 10-year U.S. government bond yields.

"Margin compression across retailing and wholesaling will remain the key driver of disinflation over the next couple quarters, after which the Fed's focus will turn to wage growth, which is a much more important driver of inflation in the medium to long-term," he adds following a review of Thursday's data.

U.S. exchange rates were already nursing heavy losses with the Pound to Dollar pair more than one percent higher on the day before the inflation figures were released though Sterling climbed further against the greenback shortly after to trade above 1.22 for the first time since early August.

"The strength in the GBP is perplexing at best and makes no fundamental or technical sense which points to a flow-driven, capital-driven move," says Brad Bechtel, head of FX strategy at Jefferies.

Dollar losses appeared to be led by heavy declines in U.S. bond yields that followed a speech delivered by Fed Chairman Jerome Powell at the Hutchins Center on Fiscal and Monetary Policy late on Wednesday.

"I think we're in a position where the right thing to do is to raise rates really quickly, and that we have, and to now slowdown to get to that place where we think we need to be," he said in a partial response to an audience question.

"And by the way, there's high uncertainty around that. We have a broad set of thoughts about where that destination might be but we could be wrong. It could be higher than that. It could be lower than that. We'll just have to see but I think that's the right approach," he added in elaboration. 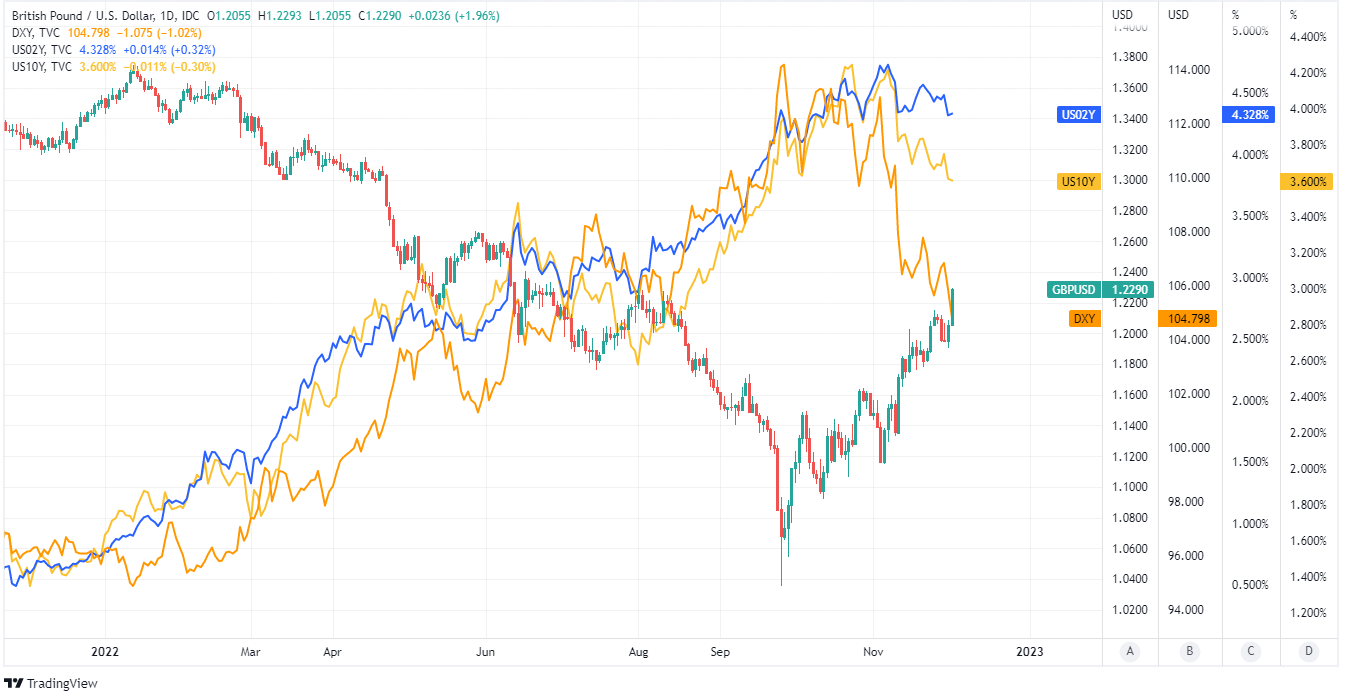 Above: Pound to Dollar rate shown at daily intervals alongside Dollar Index as well as 02-year and 10-year U.S. government bond yields.To optimise the timing of international payments you could consider setting a free FX rate alert here.

Federal Funds rate futures suggested that investors had revised down their expectation of the peak in U.S. interest rates to somewhere between 4.75% and 5% after the Fed Chair left the outlook for interest rates hinged heavily upon how inflation and the labour market develop in the months ahead.

"We doubt that Powell intended to generate that much of a rate move with his remarks, but the reason the rates market may have moved that much is that Powell reiterated his hope in a soft landing and desire to achieve one," says Stephen Gallo, European head of FX strategy at BMO Capital Markets.

"The only new factor that he introduced to the equation was a frank discussion of 2-3mn 'excessive retirements' brought on by the pandemic that he opined were unlikely to be reversed by any policy the Fed could pursue," Gallo adds.

Wednesday's address contained no suggestion of the Fed being about to back away from its view that interest rates could ultimately have to rise further than suggested back in September's round of FOMC forecasts.

"The time for moderating the pace of rate increases may come as soon as the December meeting," Chairman Powell said on Wednesday.

"Given our progress in tightening policy, the timing of that moderation is far less significant than the questions of how much further we will need to raise rates to control inflation, and the length of time it will be necessary to hold policy at a restrictive level," he added in concluding remarks.