Pound Sterling will this week look to hold the previous week's bumper 4.0% advance against the U.S. Dollar, its biggest since March 2020, a period when markets were recovering from the initial panic of the spreading coronavirus.

The bulk of the Pound to Dollar exchange rate's (GBP/USD) rally was down to the broad-based selloff in the Dollar and the widespread market relief that followed the release of softer-than-expected U.S. inflation data.

The U.S. inflation reading showed price pressures were falling in a number of sectors, which could indicate inflation has peaked.

This in turn suggests the U.S. Federal Reserve can consider easing its interest rate hiking cycle, which suggests a multi-month source of support for the Dollar is coming to an end while relieved markets no longer demand the safety this currency traditionally offers.

The Pound, by contrast, is considered a 'high beta' currency, meaning it tends to appreciate when global markets are rising, as was certainly the case following the inflation reading.

For the Dollar, "further declines in the short term cannot be ruled out as markets unwind the long USD positions," says Thanim Islam, Market Strategist at Equals Money.

"While we think this squeeze is extreme, and short-term pullback is expected, the market is clearly at a crossroads. We see little inclination to step in front of this," says a daily research note from TD Securities. "This can extend in the weeks ahead until the next CPI report."

GBP/USD has risen back to 1.1813, where it will start the new week, meaning bank accounts will be offering dollar international payment rates at around 1.1577 and competitive currency transfer providers at around 1.1778.

For GBP/USD, this week could however be determined by events in the UK where a heavy data docket meets a critical fiscal policy update from the government.

Tuesday sees the release of wage and employment data, with the market consensus looking for the Average Earnings Index, with bonuses included, to rise 6.0% in September.

The unemployment rate is expected to remain unchanged at 3.5% but job losses of 155K are expected to be reported for the three months to September.

Should the data disappoint, then the Pound would be expected to fall. (If you are looking to protect or boost your international payment budget you could consider securing today's rate for use in the future, or set an order for your ideal rate when it is achieved, more information can be found here.) 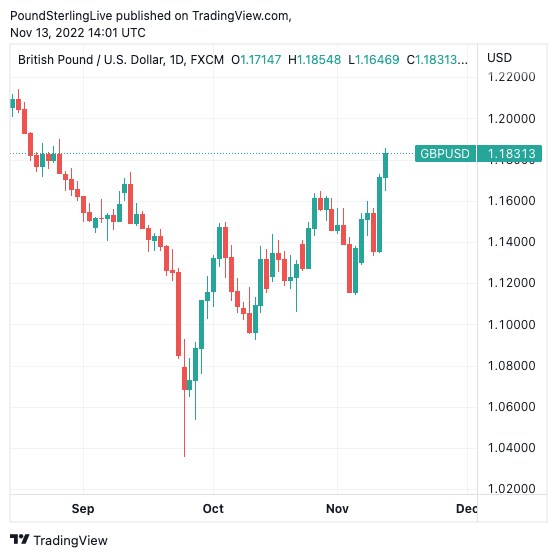 Wednesday's CPI inflation is however expected to be of greater importance for the Pound, given it has a direct bearing on the future of Bank of England interest rate decision-making.

Headline CPI inflation is forecast to report at 10.6% year-on-year for October, up on September's 10.1%.

The core CPI reading is seen at 6.4%, well ahead of the Bank of England's 2.0% target and consistent with further interest rate rises.

The reaction of the Pound to this data is hard to predict: does it rally on a weaker inflation print, as this suggests the economic pain wrought by inflation will be less severe?

Or does it fall as a weaker inflation print implies that the Bank of England can end its rate hiking cycle soon?

The uncertainty comes as the Pound's relationship to interest rate expectations has shifted through 2022, courtesy of the ructions that followed the ill-fated budget of Liz Truss and Kwasi Kwarteng.

At the time, rising Bank of England rate hike expectations was consistent with a weaker Pound, whereas the longer-term rule is that higher rate expectations support a currency.

This breakdown in the relationship between the Pound and rates reflected the risks investors saw in the UK outlook owing to Truss' unfunded tax cuts.

This week's reaction will therefore be important as it should signal what matters for the Pound again, and whether or not the Truss-Kwarteng risk premium has disappeared.

The big event for the Pound comes on Thursday when Chancellor Jeremy Hunt lays out his tax and spending plans for the coming months and years as he endeavours to regain the market's confidence and convince investors the UK's debt position remains sustainable.

Media reports suggest he is seeking to fill a 'black hole' of around £55BN and will do so by cutting spending and raising taxes.

However, the cost of Hunt's plans will be lower economic growth, which is a natural headwind to Pound Sterling's appreciation potential.

"Attention turns to the UK with the budget announcement on 17th November. We continue to expect GBP under-performance against most of the non-USD G10 currencies going forward," says Derek Halpenny, Head of Research for Global Markets EMEA at MUFG.

"Tightening fiscal policy into a recession to weigh on GBP," he adds.

Some of the potential fiscal changes to look out for on Thursday include:

Oxford Economics, the research provider and consultancy, says this week's Autumn Statement could signal a dramatic swing in UK fiscal policy from too loose to too tight.

"In our view, shifting to overly tight policy would deepen the recession that the UK is likely to endure in 2023," says Andrew Goodwin, Chief UK Economist at Oxford Economics.

The call comes days after the ONS reported the UK economy shrunk 0.6% in September.

The data confirm a potentially protracted slowdown is now underway; the Bank of England warned in October this decline could last for up to eight quarters.

Most economists we follow are also forecasting a UK recession in 2023.

"The current global environment may make executing a successful fiscal adjustment even harder," he adds.

Valentin Marinov, Head of G10 FX Strategy at Crédit Agricole, says the policies due to be announced by Hunt could help restore the fiscal credibility of the government, safeguard financial stability in the
UK and boost the Pound's long-term investment appeal.

"In the near term, however, the prospect for a sharp economic downturn could mean that the BoE would disappoint the still relatively hawkish market rate hike expectations. We therefore maintain a cautious outlook on the GBP," says Marinov.