But they warn, looking further ahead, the prospect of further losses is likely.

It was just three weeks ago when RBC found the ongoing weakness in the British Pound was not due to a loss of fiscal creditability, although they did expect further devaluation in the currency.

The research was conducted at a time when markets were assessing the new fiscal policy of Liz Truss' government; measures included a substantial pledge to cap household and business energy bills.

The government has since announced a number of planned tax cuts which have been met by a sharp decline in the value if Sterling.

What does RBC Capital make of these developments?

"In the very near-term, quite possibly it has," he says. 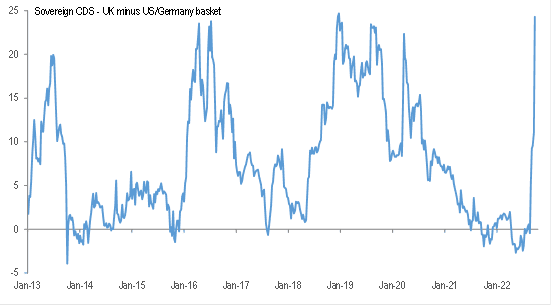 Cole explains the above chart shows UK sovereign Credit Default Swap (CDS) spreads as a premium over CDS for the average of the U.S. and Germany.

Sovereign CDS have widened in most countries, therefore looking at the UK in isolation overstates the recent rise and looking at the spreads is more appropriate.

"Having still been in the bottom of the last decade’s range in early-September, the move in the last few days has taken this spread right back to the top," says Cole.

This is largely due to the fiscal event announced last Friday by Chancellor Kwasi Kwarteng, which raised the risk premia on UK assets, including the Pound.

"Lost fiscal credibility have widened materially, and while that is not reason in itself to think they can’t widen further, there is at least a case for some consolidation and for the near-term," says Cole.

Cole looks for the Pound to Dollar exchange rate to consolidate within a wide range of 1.04-1.11.

But, longer-term, without a reversal of the announced fiscal easing (which RBC Capital don't expect), "the UK's gaping imbalances are set to get worse and, sharp as GBP's fall has been the last few days, it is still overvalued on the measures we prefer, so doing little in itself to help correct those imbalances," says Cole.