The Pound to Dollar rate has rebounded strongly from two-year lows and spent much of the week consolidating steep earlier losses but multiple resistances now obstruct its path higher on the charts and downside risks remain due to Federal Reserve and Bank of England (BoE) policy differences.

Sterling had been trading near its lowest since May 2020 on Monday before a broad retreat by the Dollar buttressed by a market bid for the Pound following Tuesday’s stronger-than-expected employment figures from the UK.

The Pound-Dollar rate climbed by almost three hundred points to trade back near 1.25 in the rally that followed and was again approaching that level on Thursday, although it would need to rise above that level by some margin in order to neutralise the steep downtrend now embedded on the charts.

“Broader trends remain adverse for the GBP and gains through 1.2635 (early May highs) are needed to confer more obvious technical strength on the pound from here,” says Juan Manuel Herrera, a strategist at Scotiabank.

The rub for the Pound is that it now has multiple resistances between roughly the 1.2507 and 1.2533 levels looming immediately overhead on the charts, and these would likely require significant upward momentum from Sterling or a sustained slide by the Dollar in order for them to be overcome. 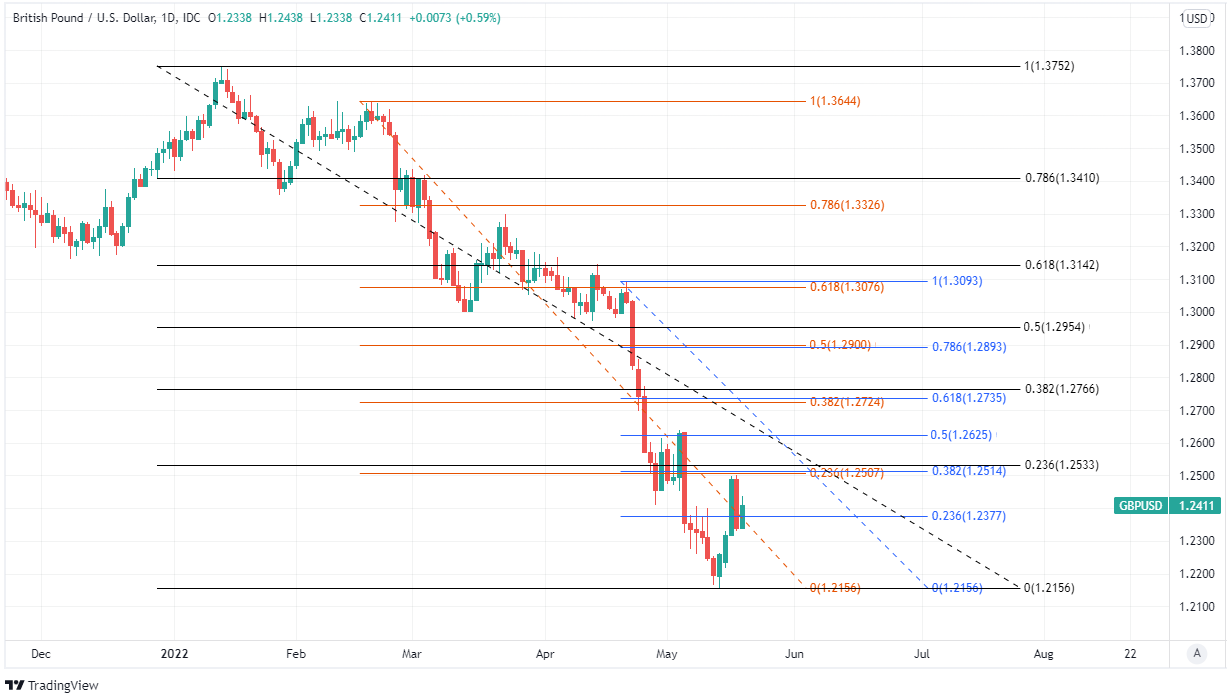 Above: Pound to Dollar rate shown at daily intervals with Fibonacci retracements of 2022 fall and various extensions thereof indicating likely areas of technical resistance for Sterling and support for the Dollar. Click image for closer inspection.

“The UK forward curve continues to price in aggressive tightening by the BoE (at around 2.50% by 3Q23 from 1.00% currently), despite recession risks being flagged at the last MPC meeting. We expect only one more rate hike, to 1.25%, probably in August,” says Roberto Mialich, an FX strategist at UniCredit Bank.

“This creates further lingering - and still large - repricing risk for sterling, against both the USD and the EUR,” Mialich and colleagues said on Thursday.

There is also a further rub for the Pound to Dollar exchange that comes from the divergent prospects for interest rates at the Bank of England and Federal Reserve, which remained intact on Thursday despite much market fanfare about Tuesday’s UK employment data.

The gap between UK and U.S. bond yields shifted in favour of Sterling this week but the diverging stances of the Fed and BoE mean that it’s highly likely to favour the U.S. Dollar over the weeks and months ahead, which is potentially - if not highly likely - a bearish omen for the Pound-Dollar rate. 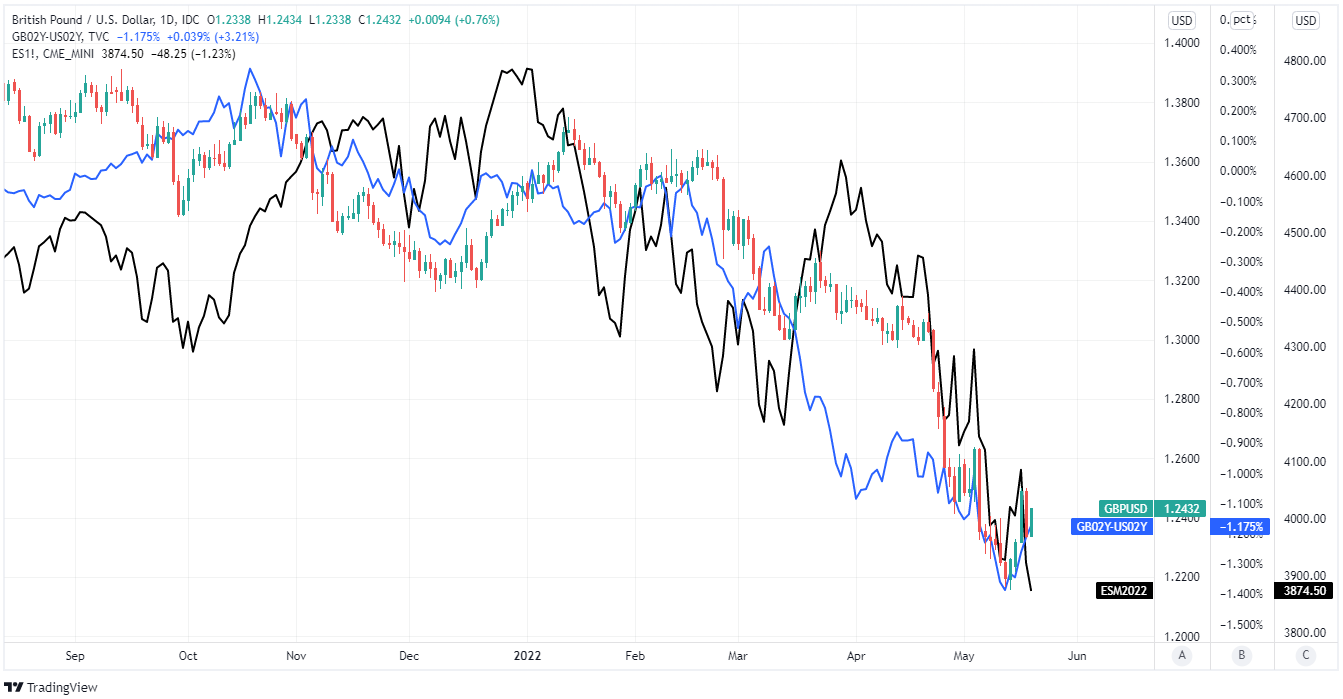 Above: Pound to Dollar rate shown at daily intervals with spread - or gap - between 02-year UK and U.S. government bond yields in blue and S&P 500 index futures in black. Click image for closer inspection.

“The combination has at least paused, if not turned, recent trends in UK-US yield spreads. Even if this proves to be short-lived, such shifts may establish a period of GBP/USD range trading (1.22-1.26) after the 10 cent fall in the past month and 16 cent fall from January's high,” Riddell also said Thursday.

The U.S. economy is in a far more robust position than its UK counterpart and so is widely expected to be less troubled by the recent surges in commodity prices and the second round effects that those can have on other prices throughout the economy.

This economic disparity is the main reason why the Fed’s interest rate stance is so much more aggressive than the BoE’s as it means there is a greater risk of the U.S. inflation rate remaining above the bank’s 2% average target and too high over the medium and longer-term.

“We like to work through expectations and I’m not blessing any particular [inaudible] readings but it’s been good to see financial markets reacting in advance based on the way we’re speaking about the economy and the consequence, as I’ve mentioned, is that financial conditions overall have tightened significantly,” Fed Chairman Jerome Powell said on Tuesday in an interview at The Wall Street Journal Future of Everything Festival. 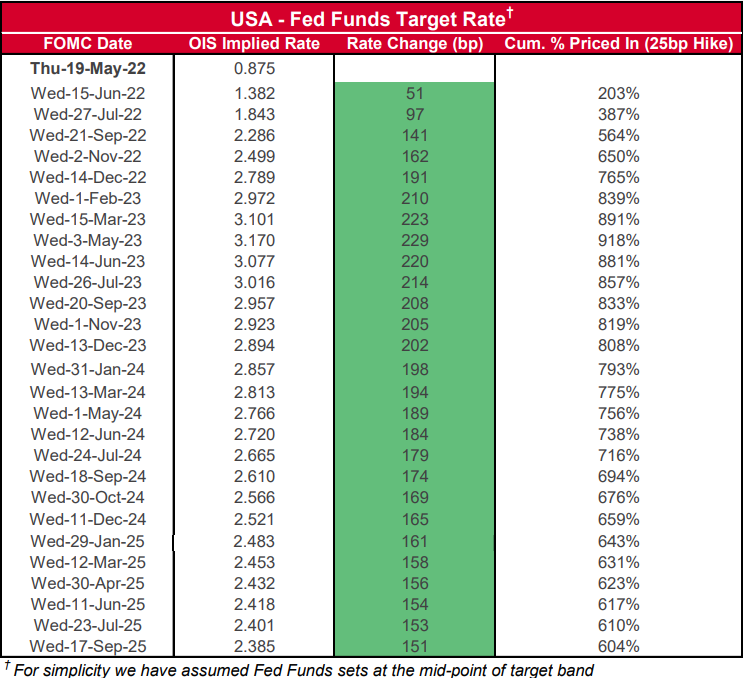 Above: Market-implied expectations for the midpoint of the Federal Funds interest rate range on Thursday. The Fed Funds range is 25 basis points wide and was set at between 0.75% and 1% on Thursday. Source: Westpac.

“What we need to see is clear and convincing evidence that inflation pressures are abating and inflation is coming down. If we don’t see that then we’ll have to consider moving more aggressively and if we do see that then we can consider moving to a slower pace. It’s going to be a judgment call that we make going forward, as we carefully monitor incoming data, the evolving outlook, how financial conditions are changing," he added.

This contrasts with the BoE's adaption of its guidance to reflect uncertainty about whether or when UK interest rates will be raised again as well as with its May forecast that UK inflation would likely fall significantly below the two percent target in the years ahead if the bank does raise Bank Rate as far as financial markets have assumed it will.

The latter was a not so subtle hint that financial market expectations are on the excessive side of what might be expected from the BoE and a further marked contrast with the Fed, which is using language that suggests the U.S. central bank could yet surprise on the upside of market expectations.

"I’m going to keep pounding the table in this note (and others) that the path back to 2% is far more important than worrying about where ‘peak’ inflation is. That will ultimately decide whether USD OIS has too much priced in, or not enough," says Bipan Rai, North American head of FX strategy at CIBC Capital Markets.

"Despite the risk-off backdrop, technical factors and extant positioning are working against the USD at the moment. Spreads in the long-end have stalled to a degree, but there’s no change to our view that risk-off factors should eventually work in favour of the greenback," Rai also said on Thursday.