Pound Sterling is under significant pressure after the Bank of England raised interest rates to 1.0% but at the same time slashed economic growth forecasts.

Forecasts show potential for economic recession by the time 2023 is out and inflation could peak as high as 10% later in 2022.

This presenting a potent cocktail of gloom for Sterling and one analyst says the Pound to Dollar exchange rate is now at risk of slipping towards 1.20.

"The Bank of England has worsened its economic outlook for 2023, expecting the economy to contract in response to tight financial conditions and the effects of high energy prices. The currency market sees the recession as a notable negative factor, putting pressure on medium and long-term interest rates," says Alex Kuptsikevich, FxPro senior market analyst.

Pound-Dollar had consolidated over the last few days and even attempted a rebound after the U.S. Federal Reserve raised rates but said doing so by a swingeing 75 basis points was a step too far.

But news that a prolonged spell of elevated inflation - that could peak at 10% in the final quarter of the year - suggests the UK economy will suffer a significant slowdown as a cost of living crisis deepens.

The Pound-Dollar exchange rate slumped to a low of 1.2360 in the wake of the Bank's policy meeting, with losses seen coming against all the major currencies. (Set your FX rate alert here). 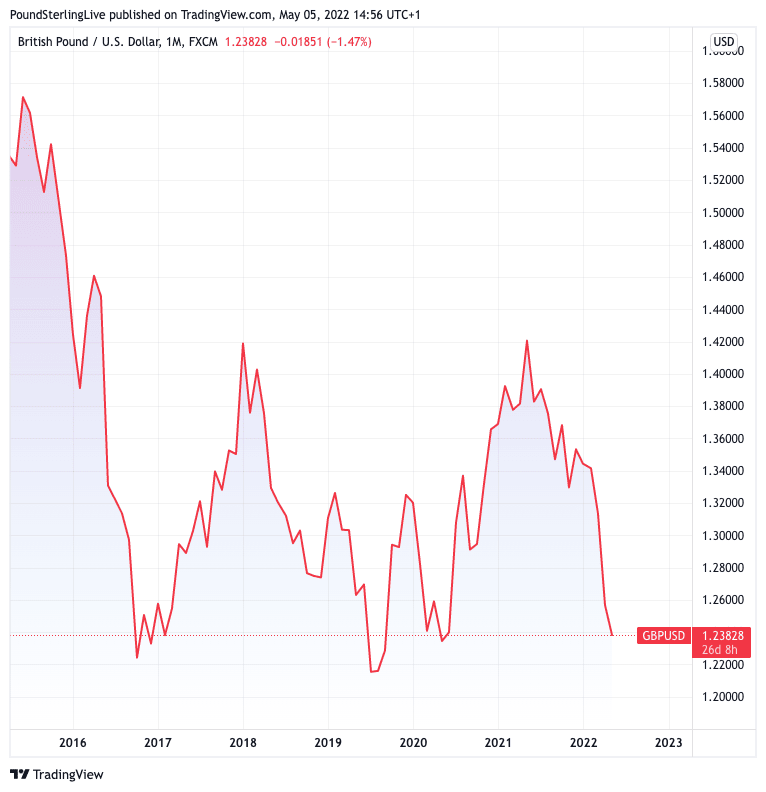 Above: GBP/USD at monthly intervals.

The market also now anticipates the Bank will be more cautious with regards to raising interest rates given expectations for lower growth rates.

This rerating of hike expectations is in turn putting notable downside pressures on the Pound.

"GBPUSD has moved sharply back down and updated to lows from June 2020, a strong bearish signal," says Kuptsikevich.

"The pair runs the risk of slipping to 1.2000, an area proven to be the Pound’s last line of defence more than once in previous years, without much of a hurdle," he adds.

The 1.20 level is significant as support from the previous six years and the 161.8% Fibonacci target from the last declining momentum since late April are concentrated here.