- GBP/USD steadier & supported at 1.3724, 1.3713
- But could struggle on any recovery above 1.3800
- As Fed’s weight grows amid possible guidance shift
- With inflation risks under closer scrutiny on FOMC
- FOMC speakers, US GDP, PCE data ahead for USD. 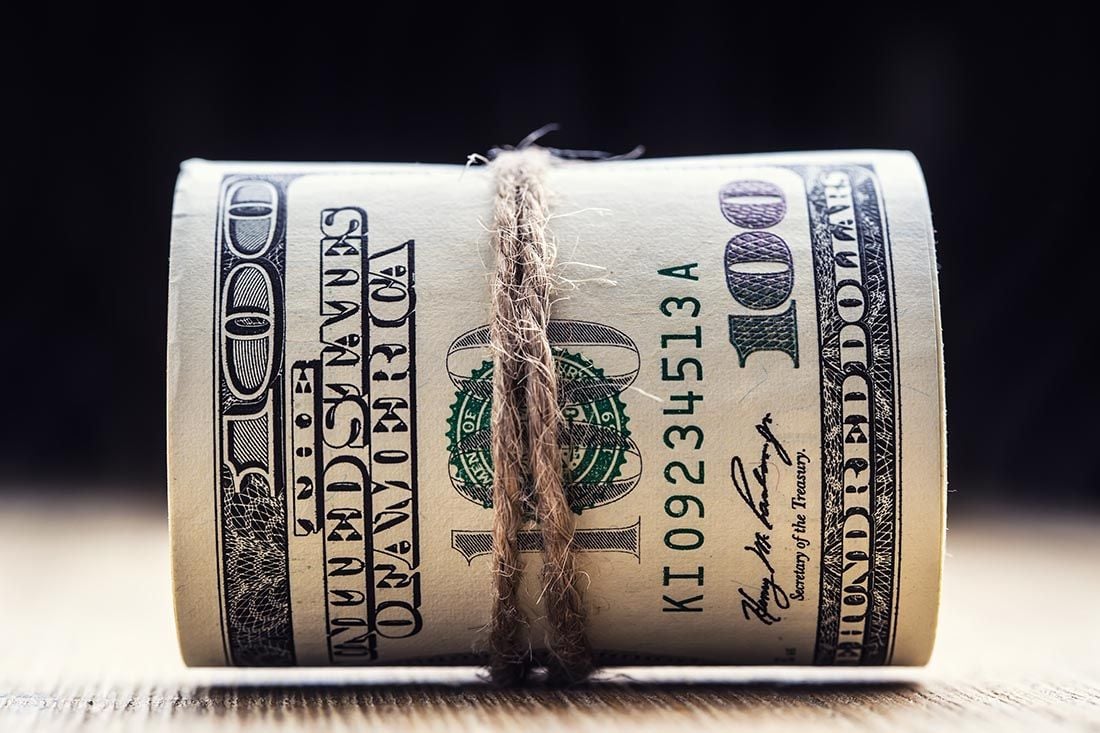 The Pound-to-Dollar rate has continued a swift reversal of September’s losses and was buoyant above 1.37 on Monday but the risk is now that any pending recovery of the 1.38 handle is undone in November on further signs of another shift in the policy stance of the Federal Reserve (Fed).

Sterling had reversed half of its four-month decline from early June highs last Thursday when the Dollar recoiled on a market that had largely gotten the better of it until that point, pulling the Pound-Dollar rate back to 1.3750 where it entered the new week.

The Pound-Dollar rate’s Friday declines were aggravated by a mixed bag of UK economic figures and the market’s response to the policy views of Huw Pill, chief economist at the Bank of England, before losses were exacerbated in the final hours of trading by commentary from the Fed.

"Odds are tilted toward BoE action at its November meeting with the bank’s chief econ Pill calling the meeting "live" in an FT interview yesterday. But markets may be checking their expectations over how much more the BoE may hike in the short run so further GBP gains against the USD toward 1.40 will require more hawkish forward guidance," Scotiabank’s Herrera and colleagues said. 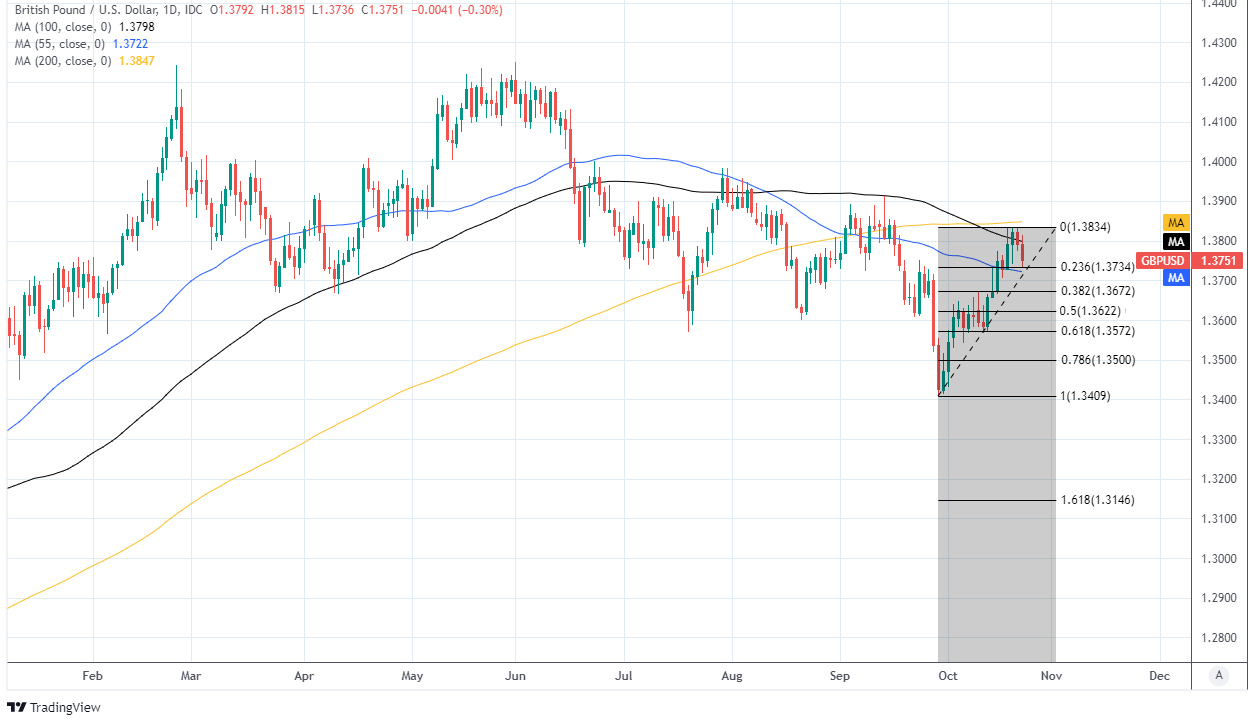 A Monday speech from BoE Monetary Policy Committee member Sylvana Tenreyro and Wednesday’s autumn budget are the highlights of an otherwise uneventful calendar for the UK and Sterling this week, which leaves much to be determined by the Dollar over the coming days.

“GBP/USD held steady yesterday and remains below the 200-day ma at 1.3850, we are concerned that this will continue to cap the topside and are alert to the idea of failure here,” says Karen Jones, head of technical analysis for currencies, commodities and bonds at Commerzbank.

Jones and colleagues flagged 1.3724 on Friday as the first most likely site of support for Sterling in the event of any losses, which coincides loosely with the Pound-Dollar rate’s 55-day moving-average and comes ahead of 1.3569 and 1.3411.

Key for the Pound-Dollar rate this week is how the greenback responds to signs of a possible change in Fed’s policy guidance being in the pipeline following remarks from Chairman Jerome Powell and Governor Christopher Waller on Thursday and Friday.

Chairman Powell suggested in a panel discussion at the Centenary Conference of the South African Reserve Bank that the Fed is keen to taper its quantitative easing programme so as to ensure the bank “is positioned to address the full range of plausible outcomes” on inflation in coming months.

Above: Selected remarks of Chair Powell at SARB’s centenary conference.

This was after Governor Waller said on Thursday the Fed would need to do more than just taper its QE programme in 2022 if inflation remains elevated at recent elevated levels into the new year, which both acknowledged was a risk.

“If monthly prints of inflation continue to run high through the remainder of this year, a more aggressive policy response than just tapering may well be warranted in 2022,” Governor Christopher Waller had said to the Stanford Institute for Economic Policy Research Associates Meeting.

"I expect inflation will moderate, which means liftoff is still some time off. That said, as I mentioned earlier, if my upside risk for inflation comes to pass, with inflation considerably above 2 percent well into 2022, then I will favor liftoff sooner than I now anticipate," he later added.

The Dollar has been sold heavily in October but might find better support in November if last week’s statements from two of the Fed’s most senior policymakers portend the introduction of caveats about inflation into the bank’s interest rate guidance next Wednesday. 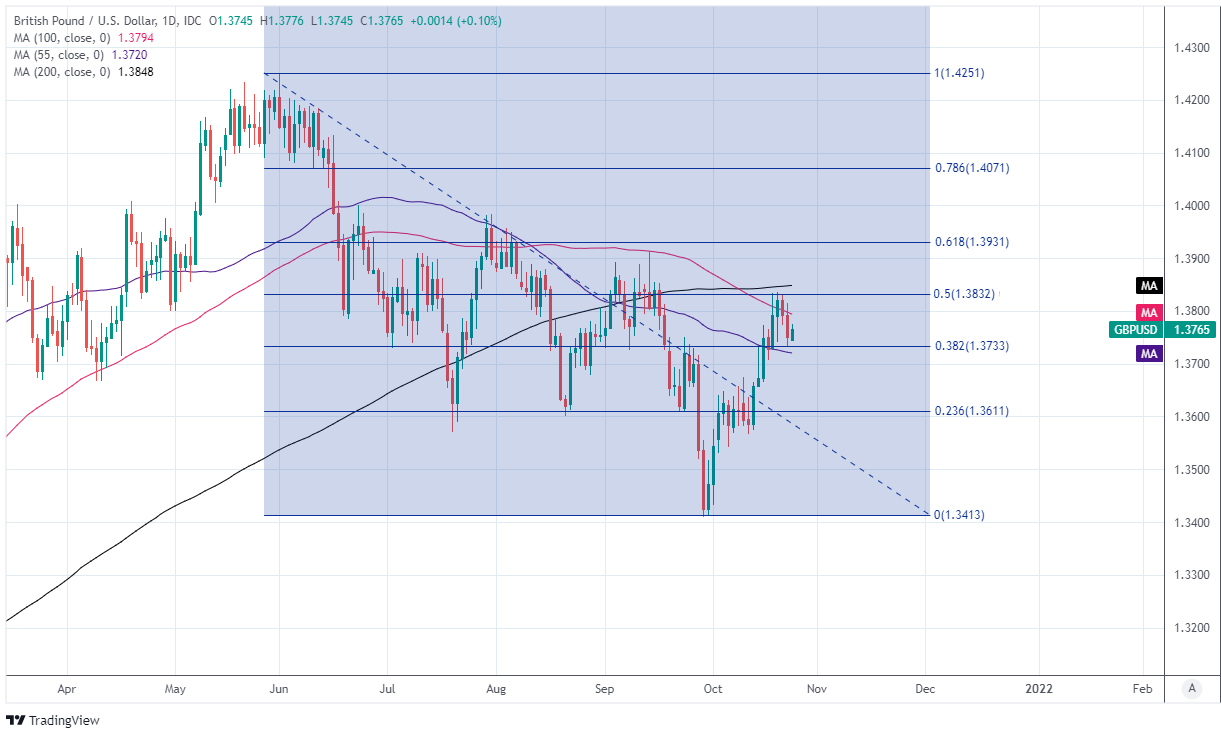 Powell and Waller both stressed that they still expect inflation to ebb during the months ahead but their remarks nonetheless implied there are circumstances in which the bank could begin reversing the interest rate cuts it announced in March 2020 as soon as the latter half of 2022.

“Expect to hear a lot more about ‘stagflation’ this coming week – given that we will get fresh updates on growth (3Q US GDP on Thursday) and inflation (the Fed’s preferred price measure, core PCE deflator, released Friday),” says Chris Turner, global head of markets and regional head of research for UK & CEE at ING.

“Here the core PCE deflator should push up to a new high of 3.7% YoY and provide some fodder to a new theme emerging from the Fed (Quarles, Waller) that high inflation over coming months could bring forward rate hikes,” Turner and colleagues wrote in a week ahead briefing on Friday.

So far the Fed has seen it at pains to impress upon the market that a rate rise remains much further off than the likely mid-2022 end of its QE tapering process so a departure from this could potentially serve to revive the Dollar over the coming weeks.

Thursday and Friday’s third quarter GDP and PCE inflation data are of enhanced importance in light of recent commentary from the Fed, which will be supplemented this week when at least one Federal Open Market Committee member is scheduled to speak each day.