- USD benefiting amidst 'risk off'
- Aided by Fed hike expectations
- Next key event is Friday's payroll data
- USD forecast to remain supported until Nov. by ThinkMarkets

The Dollar is expected to retain its dominance ahead of the U.S. non-farm payroll report scheduled for release on Friday, helped by nervous investor sentiment.

The Dollar advanced on Wednesday thanks to a renewed selloff on global markets which comes as investors price in lower growth rates amidst chronic global supply chain issues and rising inflation.

"The reasons behind the USD rally are quite clear. Financial and economic concerns about China are not over, and lingering risk aversion, amid more-volatile equity markets, continues to reinforce the role of the greenback as the most favoured safe-haven currency for now," says Roberto Mialich, FX Strategist at UniCredit.

The Pound-to-Dollar exchange rate just above 1.36 and a cursitory glance at the daily chart suggests the immediate trend remains lower: 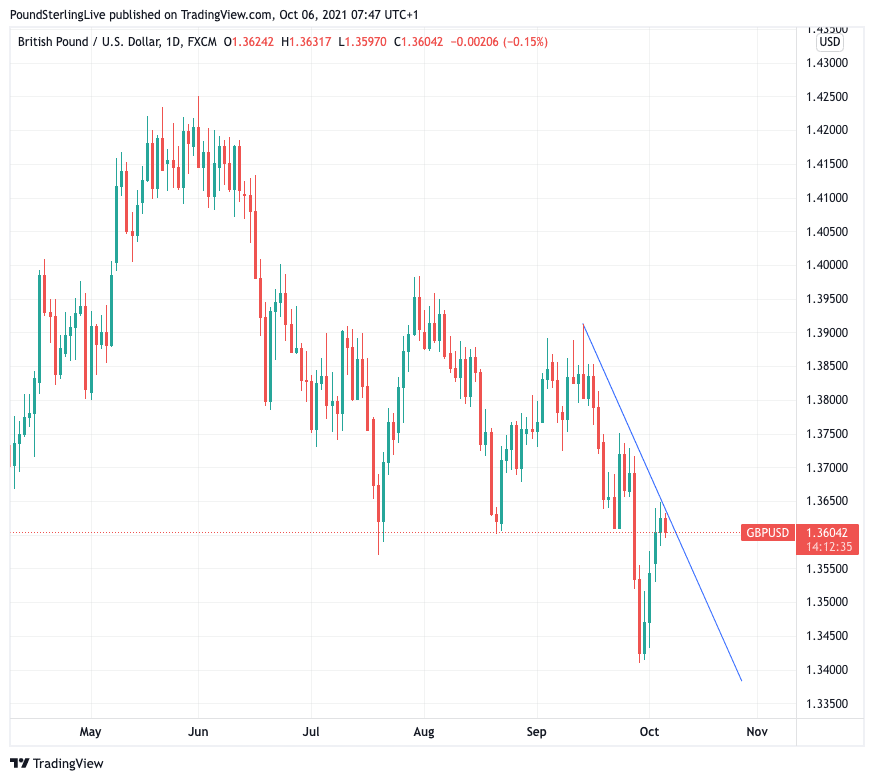 It's not just the Pound that is losing value: the Dollar is pushing higher against all the major G10 currencies on Oct. 06 and analysts expect foreign exchange market to be heavily influenced by the upcoming release of payroll data out of the U.S. on Friday.

"The USD remains healthy ahead of the release of US labor data, which will be the main focus in the coming days, limiting in turn the margin for recovery by the EUR, JPY, CHF and GBP," says Mialich.

Members of the Federal Open Market Committee (FOMC) have said they are particularly interested in the September labour market figures, saying this will sway their decision on ending quantitive easing.

The September jobs report is of importance given this was the month in which in-person schooling restarted, allowing parents to become more economically active again.

This was also the month in which the enhanced federal unemployment benefit ceased, meaning some 7.5 million Americans have an added incentive to enter the labour market again.

"The FOMC won’t have the October employment data when they next meet on Nov. 3rd, so this is it. Will this constitute 'substantial further progress?' on the labor front?" asks Marshall Gittler, Head of Investment Research at BDSwiss Group.

But he adds the "at this point the bar to no action is much higher than the bar to action, in my humble opinion."

"After the weak August report, focus will be on whether employment growth accelerated after higher benefits expired or whether more deeper running issues (i.e. supply problems or slowing demand?) are holding back jobs growth," says Aila Mihr, Senior Analyst at Danske Bank.

But Victor Golovtchenko at ThinkMarkets says the dominance of the Dollar will extend, regardless of the non-farm payroll release.

He sees the only feasible turning point for the Dollar as being the Fed's November policy update, where they are expected to announce a reduction in quantitative easing will begin.

"We expect US dollar strength to persist into that meeting and perhaps start to taper off (pun intended) after the news is finally announced. The ECB and the BOE shouldn’t take too long after the Fed to move, and the repricing of that could trap US dollar bulls on the long side," says Golovtchenko.

Golovtchenko says we're going to see a fairly strong rally over the coming month, with November probably being neutral, and a full reversal ensues into the end of the quarter as other central banks turn more hawkish. 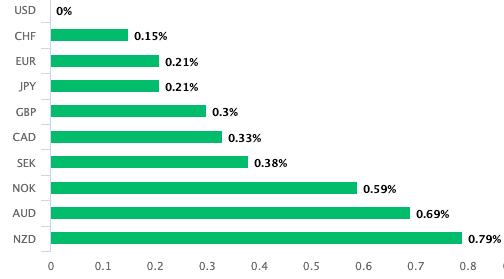 Above: The USD outperforms on Oct. 06.

A key pillar of U.S. Dollar strength in 2021 has been the assumption that the Fed would begin its exit from quantitative easing ahead of raising interest rate in 2022.

The yield paid on U.S. government bonds has risen as investors anticipate a combination of higher inflation and higher Fed interest rates, attracting the interest of foreign investors hungry for positive returns and the safety U.S. bonds offer.

Inward flows of foreign investor capital has in turn pushed the Dollar higher and this dynamic will continue to play out until other central banks commit to raising interest rates.

However with the Bank of England potentially raising interest rates in early 2022 some of the downside damage to the Pound-Dollar exchange rate could be limited.

Indeed, the Pound retains its status as one of the better performers of 2021, thanks in part to expectations for higher interest rates at the Bank of England.

But as mentioned perviously, the other source of Dollar strength is the ongoing deterioration in global investor sentiment: the Dollar therefore is in a win-win situation at present.

Only when the outlook for higher Fed interest rates are fully digested and markets start rising once again will the Dollar rally finally fade.