The Pound-to-Dollar rate entered the new week cushioned by technical support directly beneath the market but risks seeing any attempted recovery scuppered by Wednesday's policy announcement from the Federal Reserve, which comes ahead of September's decision from the Bank of England on Thursday.

Sterling was among the poorer performing major currencies for the week to Monday while the Dollar was hard on the heels of the Japanese Yen in contest for the top spot within the G10 contingent after another turbulent period for global markets.

Strong U.S. retail sales, a further contraction in UK sales and frequent losses for global stock markets were among the factors pushing the Pound-Dollar rate almost one percent lower and near to 1.3734, its most notable technical support ahead of major moving-averages at 1.3696 and 1.3627.

The first of the three was noted by analysts at Commerzbank on Friday as a pivot point and level on which the Pound-Dollar rate could stabilise this week, although Sterling's recent inability to sustain upward momentum has gotten other analysts looking for it to remain under pressure instead.

"The pound’s failed test of 1.39 on Tuesday and price action since then point to near-term weakness in the GBP," says Shaun Osborne, chief FX strategist at Scotiabank.

"We think that an on hold BoE and a possibly less dovish Fed will weigh on the GBP next week to pull it toward 1.37 and that the balance of central bank messaging could conceivably see the pound trade at, or near, 1.36," says Osborne.

Coming after September’s IHS Markit PMI surveys at 09:30 this Thursday’s 12:00 BoE decision is the highlight of the week in the UK calendar and could potentially support the Pound if market perceptions of a ‘hawkish’ shift in policy stance survive the Bank's latest assessment of the economic recovery and outlook. 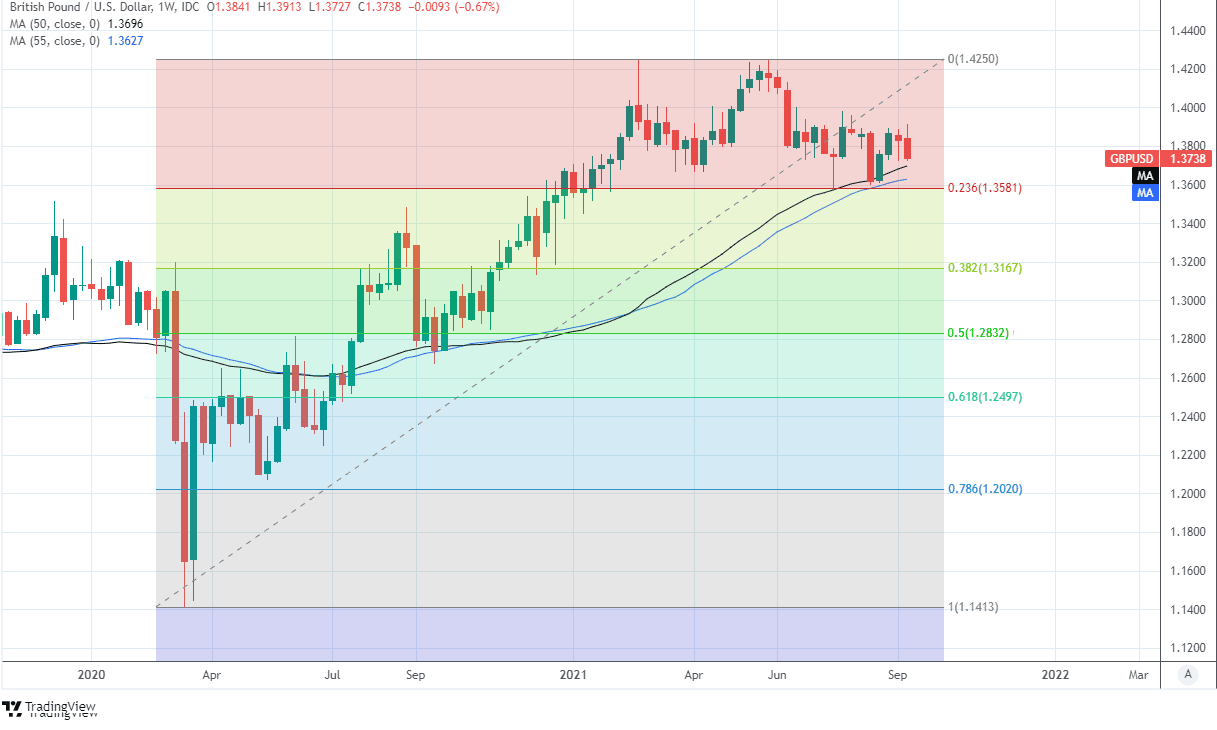 Above: Pound-Dollar rate shown at weekly intervals with 50 and 55-week moving-averages and Fibonacci retracements of 2020 recovery indicating possible additional areas of technical support.

"We expect mostly a repeat of August's narrative at next week’s meeting, but possibly with a greater focus on recent strong inflation prints rather than disappointing GDP data," says Fabrice Montagne, an economist at Barclays.

"We expect the more hawkish members (Ramsden and Saunders) to make their voices heard, highlighting risks of more persistent inflation, in contrast to warnings by more dovish members (Tenreyro and Haskel) insisting that the recovery is still too fragile to weather a premature tightening," says Montagne.

Remarks about the economy are of enhanced importance following Friday's retail sales data and other figures out the prior week casting the recovery as slower in July than many had anticipated.

Both came after Governor Andrew Bailey noted in testimony to parliament’s Treasury Select Committee on August 31 that some of the BoE’s preferred indicators are hinting of a "flattening out of the rate of recovery."

However, and despite whatever Thursday may bring for Sterling, the danger is that before then the Pound-Dollar rate comes under pressure when the Fed releases new economic and interest rate forecasts alongside its own September policy decision at 19:00 on Wednesday.

“Our US team expects the median dot to show 2 to 3 additional hikes, consistent with how the Fed anticipated the 2018 policy tightening pace in the Dec 2017 FOMC meeting,” says Adarsh Sinha, a strategist at BofA Global Research.

“Risks for the USD are skewed higher as a consequence - it seems unlikely the median dot will be below current market pricing, while there is a non-trivial chance it could be meaningfully higher, in our view," says Sinha.

These forecasts will be the first since June when the Fed’s dot-plot of policymakers’ projections shocked the market with its revelation of a Federal Open Market Committee majority in favour of lifting the Fed Funds rate on as many as two occasions and by a total of 0.50% by the end of 2023.

Many analysts expect the new forecasts to convey expectations for a faster pace of interest rate rises from 2023 because, since June, the U.S. economy has performed stronger than many anticipated, employment has continued to recover from the attempted containment of the coronavirus and inflation has been higher than the Fed expected.

“There is a risk the FOMC adopts a 'fast taper' policy (e.g., wrapping up the process by mid-2022 instead of end-Sep 2022), and the Summary of Economic Projections (SEP) could show a surprising number of rate hikes by end-2024. Cross asset correlations suggest markets may have begun discounting these risks late last week,” says Zach Pandl, co-head of global foreign exchange strategy at Goldman Sachs.

If Wednesday's projections do suggest that a faster pace of rate rises is on the horizon for the years ahead they could act as a steroid for the Dollar and a potentially significant headwind for the Pound-Dollar rate this week.

"People have PTSD from the June FOMC and are unlikely to run short USD into the meeting," says Brent Donnelly, president of Spectra Markets. "My guess is the market will buy USD into the meeting and by the time Wednesday rolls around, it’s more a non-event than a major deal."

Statements about the bank's $120BN per month bond buying programme will also be important too, however, although the likely implications of language and guidance relating to it are more ambiguous, in part because the bank has indicated repeatedly that a formal announcement is unlikely to come with September’s decision.

Above: U.S. Dollar Index shown at weekly intervals alongside GBP/USD and EUR/USD.

“It is clear that it won’t take much more of a pick-up in the jobs data to prompt a reduction in Fed asset purchases at some point in the fourth quarter, but the case for a cutback hasn’t fully gelled just yet to announce tapering,” says Kevin Cummins, chief U.S. economist at Natwest Markets.

“We continue to expect the taper to be officially announced at the November meeting, with reductions starting at the December meeting,” says Cummins.

When addressing the Jackson Hole Symposium last month Fed Chairman Jerome Powell acknowledged that progress had been made in the Fed’s quest to return the labour market to full employment but he stopped short of saying that it had been enough to warrant an imminent tapering.

These remarks came before the latest non-farm payrolls report delivered only a fraction of the job creation expected for last month, leading many analysts to become more confident the bank would defer any tapering announcement until either of October or November’s meetings.

Wednesday’s 19:00 decision and 19:30 press conference are the highlight of the week for the Dollar and in turn will have significant influence on the Pound-Dollar rate ahead of Thursday’s BoE decision, with risk of a stronger greenback that frustrates attempts by Sterling to recover from last week's losses.

“Mixed data and the end of the furlough scheme this month will restrain hawkish sentiment at the BoE, so next week’s announcement should be an afterthought to the Fed’s decision on Wednesday as an influence on the GBP,” says Scotiabank’s Osborne. 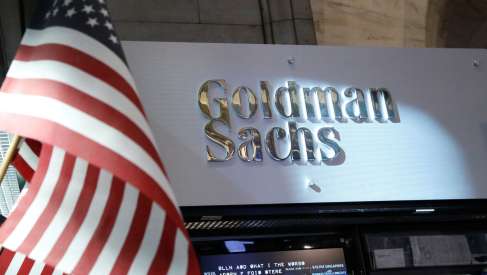