The Pound-to-Dollar exchange rate enters the new week risking a steady slide toward April lows around 1.37, which could condemn Sterling to a range-trade between there and a burgeoning resistance at 1.39 if expectations of Federal Reserve policy continue to offset for GBP/USD the signs of a shift at the Bank of England.

Sterling slipped below 1.38 in the final hours of the trading ahead of the weekend as Thursday’s boost from Bank of England (BoE) commentary faded, opening up the question of whether lower levels are ahead just as some analysts and investors fret about rising coronavirus infections globally and the possible implications of newly-mutated editions of the disease.

“FX markets remain choppy, still with a risk-off flavor, but we are not very concerned for now. Our flows do not reflect a panic, with hedge funds cutting some of their long EM positions, real money actually adding to their EURUSD longs, and overall light trading,” says Athanasios Vamvakidis, head of FX strategy at BofA Global Research.

“The beginning of Fed policy normalization, with announcement of QE tapering, by the end of the year is almost a done deal in our view; the pace and then the timing of the hikes will depend on inflation. Powell's Congress testimony was dovish this week, but this was because he had to defend the still very loose Fed monetary policy,” Vamvakidis says in a Friday note.

Vamvakidis and the BofA team have stood firm behind bullish Dollar forecasts throughout 2021 and in the weeks since early June the market has swung in their direction, implying a gradual easing lower for GBP/USD to 1.35 by the end of September if the recent trend continues.

The Pound-to-Dollar rate failed in the latest of many spirited efforts last week to reclaim the 1.39 level, which may now have taken on the role of resistance level, and the danger is now that Sterling struggles to hold onto even 1.38 for very long if it’s recovered over the coming days. 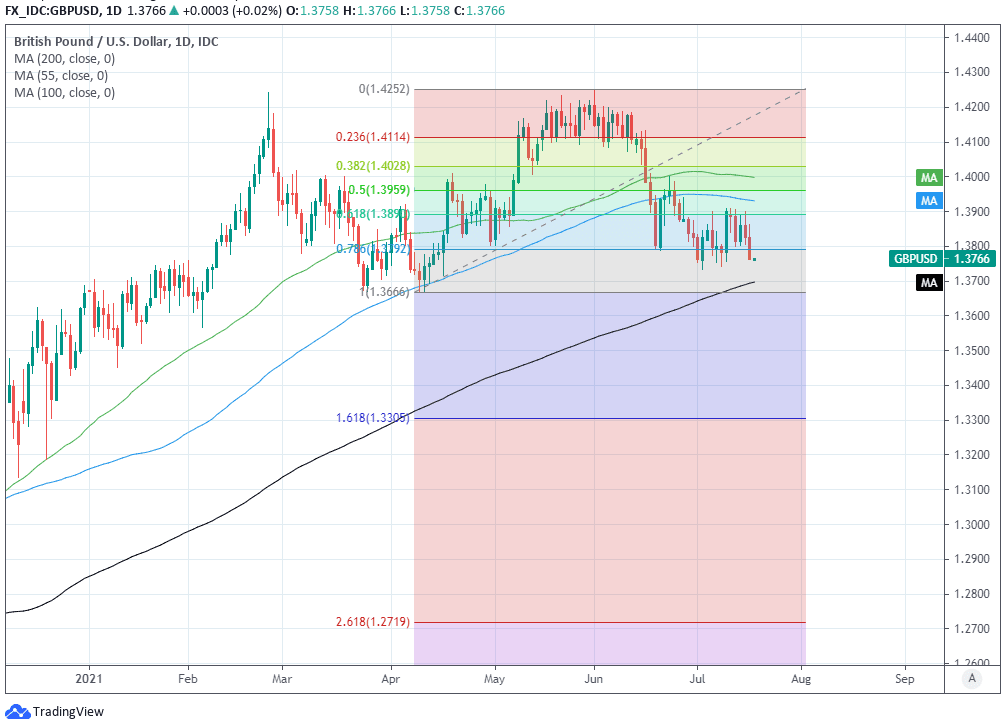 “GBPUSD spot has become detached from building expectations in the financial markets of some form of BoE policy normalization. Assuming the late-2022/early-2023 portions of the sterling OIS curve remain roughly where they are, we would expect GBPUSD to encounter support beneath 1.3800 over the near-term,” Gallo writes in a Friday research note.

The Pound-Dollar rate has been on a downward trajectory since early June when it was pulled lower from three year highs around 1.4250 and may now be on course to retest early April lows around 1.37 if the greenback’s advance continues this week, which sees no major U.S. economic figures released.

“GBP/USD is to range-trade further between its 55- and 200-day moving averages at 1.4004 and 1.3694. While the former caps, we should see further losses to the 200 day ma at 1.3694 and the late March and early April lows at 1.3670/69. We look for this to hold the initial test,” says Karen Jones, head of technical analysis for currencies, commodities and bonds at Commerzbank.

The Dollar has slowly but surely been winning a continuing tug-of-war with most other currencies and its advocates are currently emboldened by a U.S. recovery that has been faster than those elsewhere, with the sole exception of China, and which was on show again last Friday when June retail sales figures surprised sharply on the upside of economists' expectations.

Inflation has also continued to emerge stronger than almost all forecasters had envisaged and kept investors betting on a steeper and swifter cycle of interest rate rises in the U.S. than is seen as likely elsewhere.

“Another very firm CPI report for June (+0.9% m-o-m for the core measure) and the prospect of an acceleration in US job growth in July (reported in early August) will likely keep markets focused on the risk of early Fed tightening,” says Zach Pandl, co-head of global foreign exchange strategy at Goldman Sachs, who’s “on the sidelines in USD vs G10” but anticipates a renewed decline for Dollar exchange rates later in the year.

“Meanwhile, Delta variant covid outbreaks have introduced downside risks to growth in some parts of the world and have likely also supported the safe-haven Dollar on the margin,” Pandl adds.

Interest rate market pricing does also suggest however, that there’s a chance the BoE will also lift its interest rate around the same time as if-not before the Fed, which is one potential explanation for why the Dollar’s advance against the Pound has been limited and gradual thus far.

“For G10, over the last few weeks we’ve cut our USD shorts, and where we are long (GBP, for example), we are long versus EUR, where despite improving vaccination rates, there appears to be more political will for restrictions (examples being Spain and Netherlands for this week), and of course a dovish central bank,” says John Briggs, global head of desk strategy at Natwest Markets. 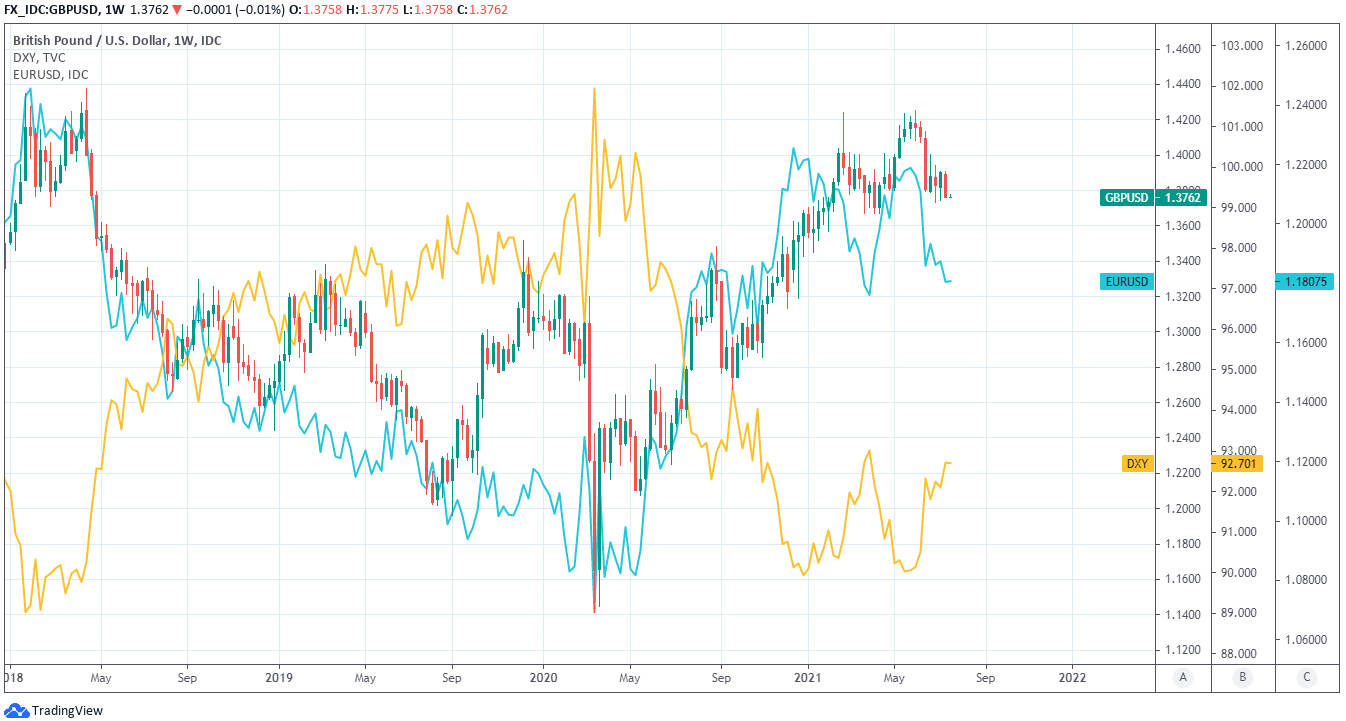 Above: Pound-to-Dollar exchange rate shown at weekly intervals with Dollar Index and EUR/USD.

While downward biased for the time being, Sterling may still experience bouts of demand this week and thereafter as the UK’s latest economic data and commentary from BoE policymakers makes its way out to the market.

“The public appearances by MPC members Haskel (Monday) and Broadbent (Thursday) and future MPC member Catherine Mann (on Monday) will give us an idea if more of the MPC is leaning towards tightening policy sooner,” says Paul Dales, chief UK economist at Capital Economics.

“June’s retail sales and July’s Flash PMIs (both due on Friday) may show that the recovery in activity has lost a bit of oomph,” Dales adds.

A host of BoE officials are set to speak this week including external Monetary Policy Committee member Jonathan Haskel on Monday and the incoming Catherine Mann who takes post in September, while Deputy Governor Ben Broadbent will also speak on Thursday.

The BoE had dampened enthusiasm for the Pound in June when saying it wanted to "lean strongly against downside risks to the outlook and ensure that the recovery was not undermined by a premature tightening in monetary conditions," but recent UK inflation data, commentary from some of the BoE's policymakers and a global decline in government bond yields may mean it's soon motivated and able to adjust its own policy sooner than otherwise.

“A number of other central banks have brought forward the prospect of rate hikes given strong reopening momentum and stronger, more persistent inflation threats. There appears to be a rising risk that the Bank of England will follow suit,” says Michael Cahill, a Goldman Sachs colleague of Pandl.

“With this in mind, we will be closely watching Deputy Governor Broadbent’s speech next week on the inflation outlook for possible signals on the policy response and balance sheet vs rate hike sequencing. This will be an important marker for whether our relatively cautious Sterling view remains appropriate,” Cahill adds.