The Euro-Dollar rate has been range-trading since January's near-unravelling below the landmark 1.20 level but could break in either direction over the coming months, according to BofA Global Research and ING, whose forecasts tell a story of competing scenarios for 2021 outcomes from here.

Europe's single currency was higher on Thursday but still comfortably within its February range which thus far spans the gap between 1.1960 and 1.2170 amid what many analysts characterise as a "positioning adjustment" among investors who were unsettled last month by the European Central Bank (ECB).

ECB President Christine Lagarde said on January 13 that she and fellow Eurozone policymakers are "extremely attentive" to EUR/USD following a 10% rally within a nine-month period that had lifted the trade-weighted single currency sharply and was threatening the bank's inflation outlook.

Europe's policymakers are expected to use monetary policy to foster a steady average inflation rate of "close to, but below 2%" over the medium-term.

But the objective has gone unmet for years and 2020's enthusiastic bid by the market for the European unit was seen placing attainment of the target in further jeopardy from here, given that stronger exchange rates can reduce inflation by cheapening the cost of imported goods.

Hence repeated verbal interventions from the ECB. Minutes of the bank's latest meeting shed some light Thursday on policymakers' views on the subject when they last met between January 20 and 21.

"The ECB rhetoric against EUR strength and threats for more negative depo rates have intensified this year. Although this is not really new, such rhetoric soon after the ECB extended the PEPP and while EURUSD has stopped appreciating suggests to us that the ECB may be more aggressive against further currency strength this year," says Athanasios Vamvakidis, head of FX strategy at BofA Global Research. "We argue that EUR is currently consistent with long-term equilibrium estimates, but the relative position of the Eurozone economy in the business cycle would be consistent with a weaker level."

Europe's delays and difficulties in rolling out coronavirus vaccines risks leaving the continent trailing behind developed world peers in its economic recovery, and was a dominant feature of the news agenda in January, which doubtless had an impact on the Euro and investors' views of its prospects. This vaccine woe and its implications for the economy are a further negative for the ECB's inflation outlook and one that matters for the currency market.

Vaccine troubles are among the factors helping determine what is Europe's lagging position in the business cycle which, according to BofA Global Research, justifies a lower value for the Euro in the here and now as well as over the balance of the year. The bank looks for the Dollar to prosper in 2021 aided by a U.S. economy that outperforms others, which is an outlook that is widely contested by others. Although few disagree with the idea that the Euro might still somehow need to adjust lower in the short-term.

"The Eurozone economy has deviated substantially from its internal equilibrium during the pandemic, more so than most other G10 economies. This in turn could justify a EUR level weaker than the long-term equilibrium, until the output gap is again closed. This in turn suggests that the ECB concerns are justified, particularly to the extent that the central bank needs to prevent further currency appreciation," Vamvakidis says. "The EUR was well below its historic average a year ago, but the USD sell-off led to a stronger EURUSD, bringing the trade-weighted EUR, in both nominal and real terms, back to its long-term average."

BofA Global Research forecasts the Euro-Dollar rate to remain around 1.20 through the first-quarter before declining to 1.18 and 1.16 by June and September respectively, and later ending the year around 1.15. These are February downgrades from earlier projections for a climb from 1.20, up to 1.22 and 1.24 respectively ahead of a year-end finish around 1.25. These numbers reflect both a better U.S. growth outlook as well as an ECB-motivated adjustment lower by the Euro that comes from EUR/USD. 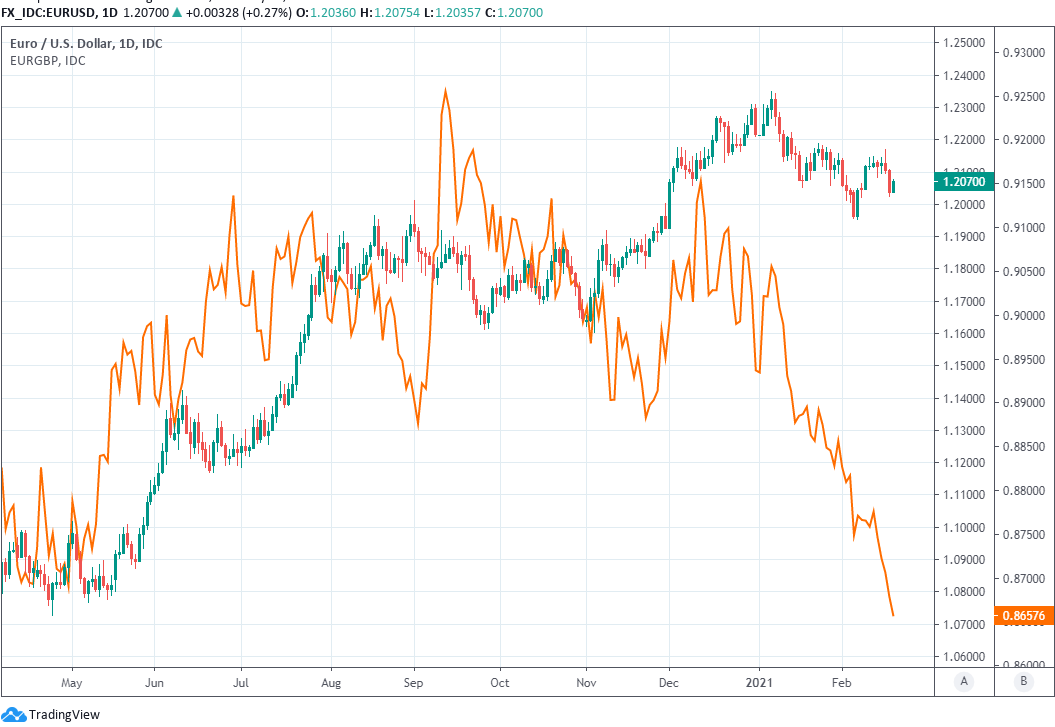 Above: Euro-Dollar rate at daily intervals alongside EUR/GBP (orange).

To the extent that it's ever possible for any observer to say so with any degree of certainty, it's no coincidence that February's stabilisation of the Euro-Dollar rate has come alongside a significant leg lower in EUR/GBP and a rise in the Pound-to-Euro rate. There are many different forms and variations of trade-weighted measures for the Euro, although the ECB's most concentrated version has given Pound Sterling up to a 15% weighting as recently as 2018.

This weighting, along with the EUR/GBP slide, will almost certainly have had the effect of reducing upward pressure on their trade-weighted measure of the single currency while stabilising EUR/USD. And as a result the outlook for Sterling could itself be a key determinant of whether the Euro sustains itself above 1.20 this year, while the latter is always a crucial factor in determining the overall Dollar trend due to its 57% weighting in the ICE Dollar Index and dominance in other measures of the greenback.

"With the bulk of the USD consolidation likely behind us and the theme of reflation still having more legs to go, we expect the EUR/USD undervaluation gap to fully close and EUR/USD short-term fair value to move higher over the coming months," says Petr Krpata, chief EMEA strategist at ING. "With the risk of hard Brexit out of the way and the fast UK vaccination process in place, the GBP trading dynamics should shift and the currency is now set to experience more frequent occasions of an overshot into the overvalued territory vs the prior Brexit-related undershoot into the undervalued territory." 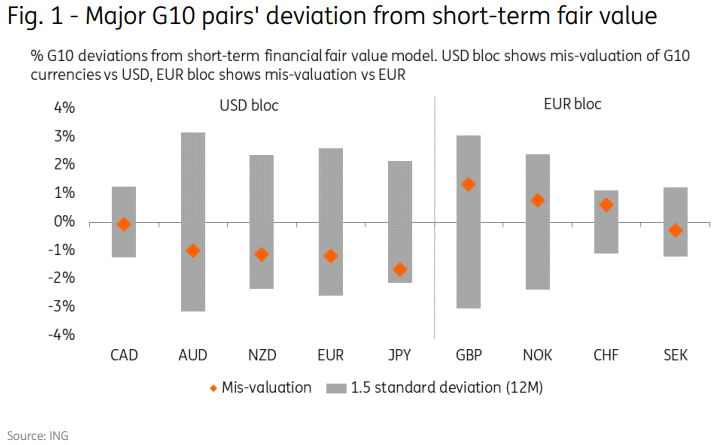 ING has a downbeat outlook for the U.S. Dollar owing in part to the expectation that the second quarter of 2021 will prove to be a gamechanger for the Eurozone economy, one which leaves it looking like a "breakout quarter" that comes alongside indications of a recovery in inflation. The bank forecasts a Euro-Dollar rise from 1.20 in the first-quarter, to 1.22 and then 1.27 over the second and third periods before finishing the year around 1.30.

During this time "fair value" for EUR/USD is expected to creep higher as EUR/GBP falls into undervaluation territory that is indicative of a tepid and tentative overvaluation of Pound Sterling. However, Sterling's overvaluation is tipped to lead EUR/GBP's fall to slow over the coming months, as EUR/USD begins to edge higher.

"European pessimists (we’d include the ECB here) must be wondering what EUR/USD has been doing above 1.20 given broadening lockdowns across Europe, a chaotic vaccine roll-out and now the threat of ECB rate cuts against EUR strength? Indeed the ECB is launching a study," Krpata writes in a recent forecast review. "Keeping EUR/$ bid is the dovish set of Fed policies which have driven US real rates to -2%. As long as global recovery hopes remain alive and the Fed doesn’t tighten, EUR/USD downside should prove short-lived below 1.20. The ECB won’t like EUR/USD strength, but if we are right in that 2Q21 remains the break-out growth quarter, and EZ inflation is creeping higher, ECB will have a tough time talking down the EUR."