The U.S. Dollar recorded a 2.0% advance against the British Pound in the month of June and how the coming days and weeks play out for the U.S. currency could well depend on the July 02 jobs report.

The Pound-to-Dollar exchange rate fell below 1.40 in June and reached 1.3790 on Thursday July 01 amidst a broad sweep higher by the U.S. Dollar which established itself as the top performing major currency for the month.

Outperformance by the Dollar comes thanks to a recognition by investors that the country's economy was improving at such a pace the Federal Reserve (Fed) would have to respond by raising interest rates, an outcome alluded to at the Fed's Feb policy update. 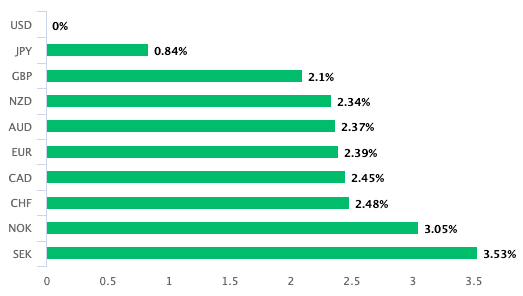 Above: Dollar performance in June.

"The FX market has started to focus more on US data as a guide to when tapering and rate normalisation could begin," says Dominic Bunning, Head of European FX Research at HSBC.

Before the Fed raises interest rates it must end its quantitative easing programme whereby it buys corporate and government bonds to ensure the yield those bonds pay are kept low.

By keeping bond yields low the cost of borrowing throughout the economy is supressed, thereby aiding the economic recovery.

But a potential cost of this programme is an overheating economy and uncomfortable levels of inflation which could in turn prove destabilising.

Ending this programme - a process known as tapering - is therefore a key signal to investors on the outlook for the U.S. economy, yields and the Dollar's valuation.

The next chapter of the story comes in the form of Friday's non-farm payroll report for June, where the market is expecting the economy to have created 700K new jobs, up from the 559K created in May.

A disappointing headline figure could send the U.S. Dollar lower against its peers, while a beat could ensure the June trend of appreciation extends.

"Previously, there was a sense that the data was less relevant and the Fed was just looking through the noise. Now, there is clearly a live debate around the various stages of policy normalisation," says Bunning in a payrolls preview report out this week.

The Fed has adopted a new approach to monetary policy whereby it targets inflation and employment; previously keeping inflation stable around 2.0% was its primary objective.

In August 2020 the Fed set out a new framework whereby it stated it would aim for maximum employment and price stability.

"The Fed has made it clear that employment is its key target in the near-term and that it will not consider hiking until the economy is back at “full employment”. A recovery of half of the fall in employment seen during the COVID-19 crisis may be enough for tapering to begin. So the jobs data clearly matters," says Bunning.

Research conducted by HSBC shows that the Dollar has become increasingly reactive to the U.S. labour report over the recent past: 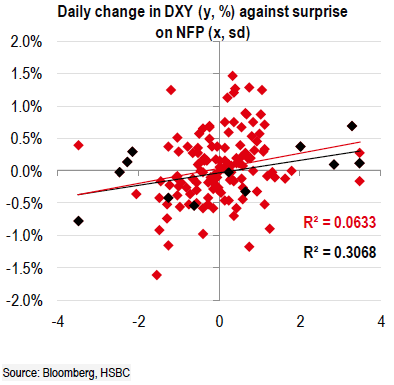 The findings suggest that a two standard deviation payrolls surprise is equal to around 180k jobs.

"With a consensus estimate of around 700k at the time of writing, it would suggest that any print over 900k should be associated with a strong USD in the near term," says Bunning.

Interestingly the research suggests the larger downside surprises in the last year have been less associated with a weak U.S. Dollar.

This in turn would suggest the bar to a strong rebound in the Pound-Dollar exchange rate is set high going into Friday.