The Dollar advanced against all major rivals ahead of an important Tuesday address from Federal Reserve Chairman Jerome Powell which is set to determine if the greenback seeks to advance further in the weeks ahead, or if it eventually settles into a low volatility summer range.

Dollars were bought back widely on Tuesday, reversing some of the losses sustained by the greenback at the opening of the new week while placing a fresh question mark over the outlook for the U.S. unit and other currencies ahead of a 19:00 appearance before Congress by Powell, his first appearance since last Wednesday’s monetary policy decision which triggered widespread and sharp gains for the U.S. Dollar.

“Fed chair Powell's testimony on the crisis response and the economy in theory is a platform to correct some of the wild price action if he deems the furore in the bond market reaction and surge in volatility exaggerated. Powell emphasised last Wednesday that two rate increases in 2023 must be taken with a grain of salt, but forward rates need greater convincing as they are now discounting a rise to 1% (2y2y),” says Kenneth Broux, a London-based FX strategist at Societe Generale.

For readers’ background, last week’s update saw a majority of the Fed’s rate setters indicate they now individually expect to vote to lift U.S. rates before the end of 2023 and with a substantial minority on the Federal Open Market Committee even seeing a potential case for a move as soon as next year, although Chair Powell played down the significance of that so-called dot-plot of projections in a press conference after the announcement.

The suggestion that 2022 and 2023 interest rate rises are in any way likely was somewhat contrary to the Fed’s earlier guidance but came after a run of stronger-than-expected inflation numbers and so as a result financial markets will listen closely on Tuesday for clarity on just how seriously other policymakers’ views on the outlook for the 0%-to-0.25% Fed Funds rate range should be taken. 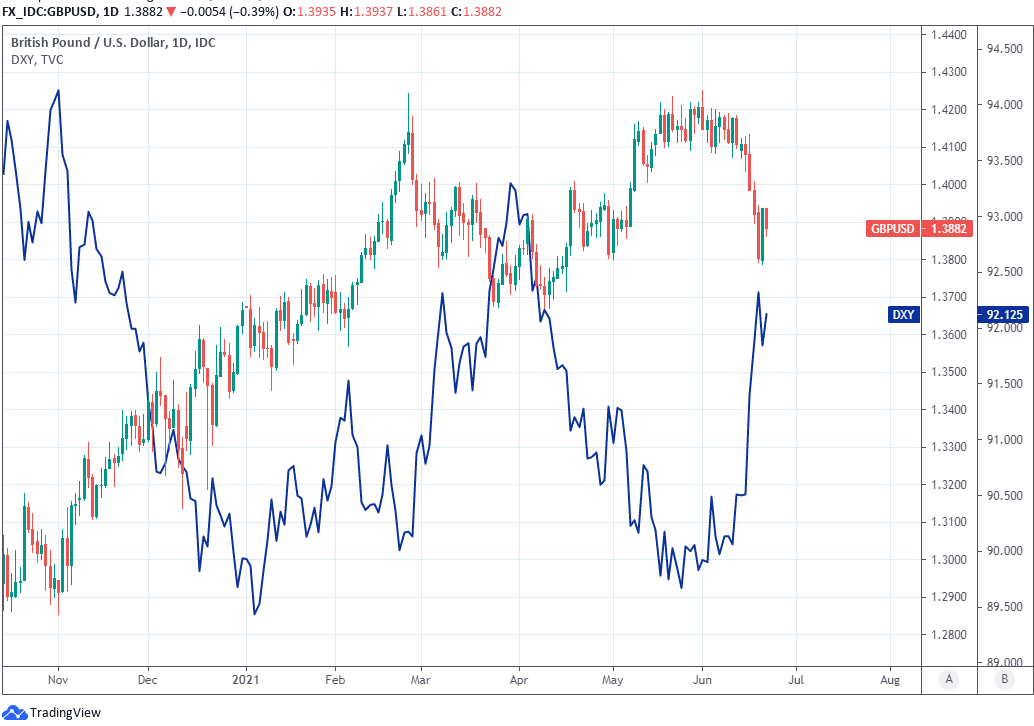 “This will largely depend on data releases in the months to come, and whether the pickup in employment levels along with sustained inflation prints persist,” says Ali Jaffari, head of North American capital markets at Validus Risk Management, of the outlook for interest rates.

“Keep an eye on the Bank of Canada, Reserve Bank of Australia, and Bank of England as a hawkish reaction could partly reverse the recent currency declines seen and impede the current bout of USD strength,” Jaffari says.

Partly due to lingering uncertainty over whether the Fed’s stance has really changed much at all, there’s a chance the Dollar could derive a further lift this week if Chair Powell says anything in Congress to vindicate investors for having gone scrambling price-in a sooner-than-anticipated lift off for interest rates and to exit earlier wagers against the Dollar.

But any pushback on Tuesday against recent market wagers on the U.S. rate outlook could see exchange rates marooned in an indecisive lethargy for the summer period, as a less-than-obliging Fed would leave currency traders with few decisive clues about the ever tentative policy position in the U.S. while on the other side of the Atlantic and elsewhere in the world, ‘hawkishness’ among other central banks has been limited.

“This week will see a handful of FOMC member speeches, with investors keen to gauge whether the extent to which this hawkish shift is supported,” says Mathew Ryan, senior analyst at international payments specialist Ebury.

“Sterling has actually held up rather well so far this week, perhaps in anticipation of this Thursday’s Bank of England meeting. The BoE has been one of the more hawkish central banks in the G10 in the past few weeks, with a number of members warning that tighter policy may be needed to rein in soaring inflation. While no macroeconomic projections or Inflation Report will be released this week, investors will still be keeping close tabs on the MPC,” Ryan adds.

Many other central banks including the Bank of England (BoE), which announces its latest policy decision on Thursday, have made tweaks to quantitative easing policies but with the exception of the Bank of Canada, Reserve Bank of New Zealand (RBNZ) and Norges Bank, few have given any strong hint of an interest rate rise being in any way likely over the next one-to-two years.

Any remarks by Powell or other Federal Open Market Committee members which lead the market to doubt the seemingly increased proximity of a Fed policy change, either this week or thereafter, could put a lid on the Dollar and a floor under the likes of Pound Sterling.

This would risk trapping major exchange rates in potentially stifling ranges for a period of time, although such an outcome would be favourable to currencies, which are generally less able to keep a strengthening Dollar at bay and are economically vulnerable to rising U.S. borrowing costs.

“A combination of global reflation (with strong growth and more inflation) along with a very patient Fed sounds particularly helpful for EM, as it entails a rare coincidence where both the commercial channel (trade) and financial channel (capital flows) are supportive,” says Luigi Speranza, chief global economist at BNP Paribas.

“Some EM central banks have already started raising interest rates, such as those in Brazil and Russia, and we expect other central banks to join the hiking club over the next several months. We draw a distinction here, though: central banks in ASEAN economies seem in no rush to hike, as inflation appears less of a concern there.”