Dollars were bought heavily and against almost all counterparts this week, leading the greenback to the top of the performance rankings among so-called G10 currencies while enabling the ICE Dollar Index to rise above both 100 and 200-day moving-averages, while also taking out a hat-trick of Fibonacci retracement levels.

It cannot be said for certain at such an early stage, but it’s certainly possible the bounce is being driven by a two-pronged tailwind including new money which has been lured by tentative signs of a policy shift at the Federal Reserve as well as capitulation by punters who’d been wagering against the Dollar.

The resulting Dollar gains were as steep as they were broad, leading the ICE measure of the U.S. currency against its most frequently traded counterparts to rise by 2.3% for the week to Friday along, which had the effect of lifting the benchmark to a 2021 gain of 2.48%. 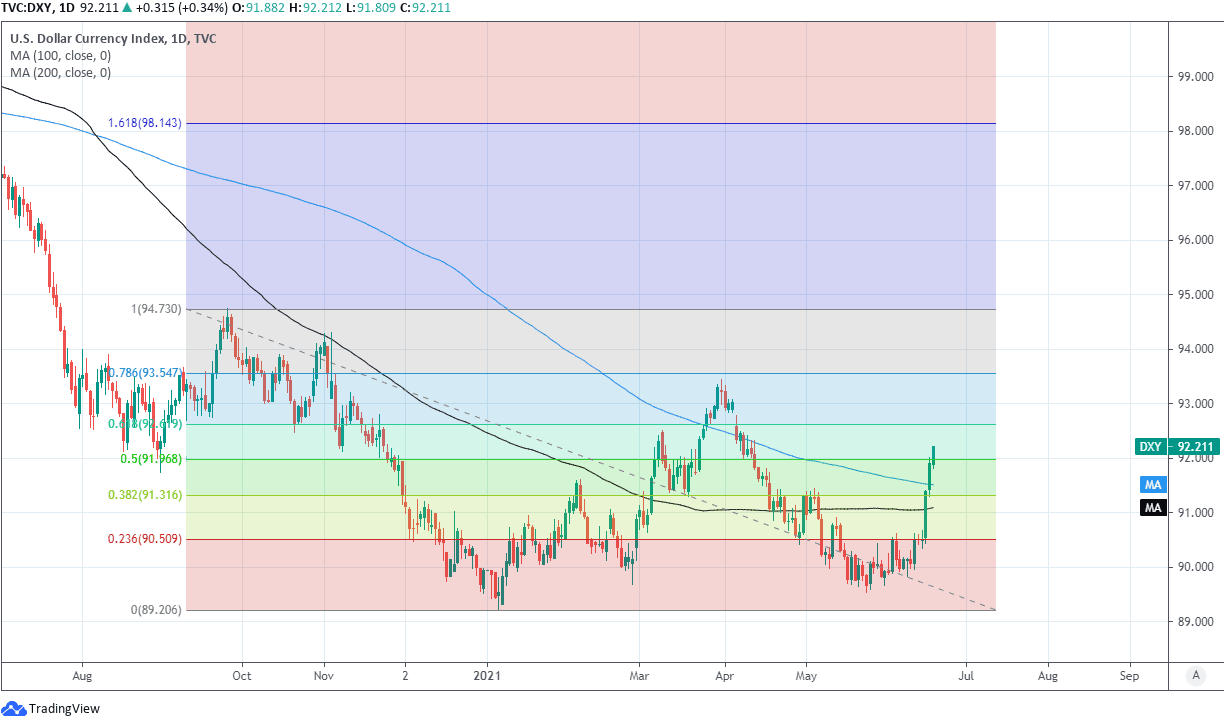 Previously, by mid-June, the Dollar Index had been sitting largely unchanged for 2021 after a fortnight spent creeping back from low single-digit losses for the year.

This comes after the Federal Open Market Committee of the Fed indicated on Wednesday, using its so-called dot-plot of policymaker expectations for the Federal Funds interest rate range, that rate setters now see current economic conditions as warranting an initial interest rate rise in 2023 rather than 2024.

That has gotten markets moving and analysts mulling forecasts or otherwise contemplating what the latest Fed guidance could mean for various markets going forward, while there’s plenty of fodder for debate out there.

For instance, Friday’s gains in gold and silver prices - which normally tend to move in the opposing direction to the Dollar - could indicate limited investor confidence in the rebound, while USD/JPY price action throughout this week is a potential indication of the overall Dollar move’s limited scope. 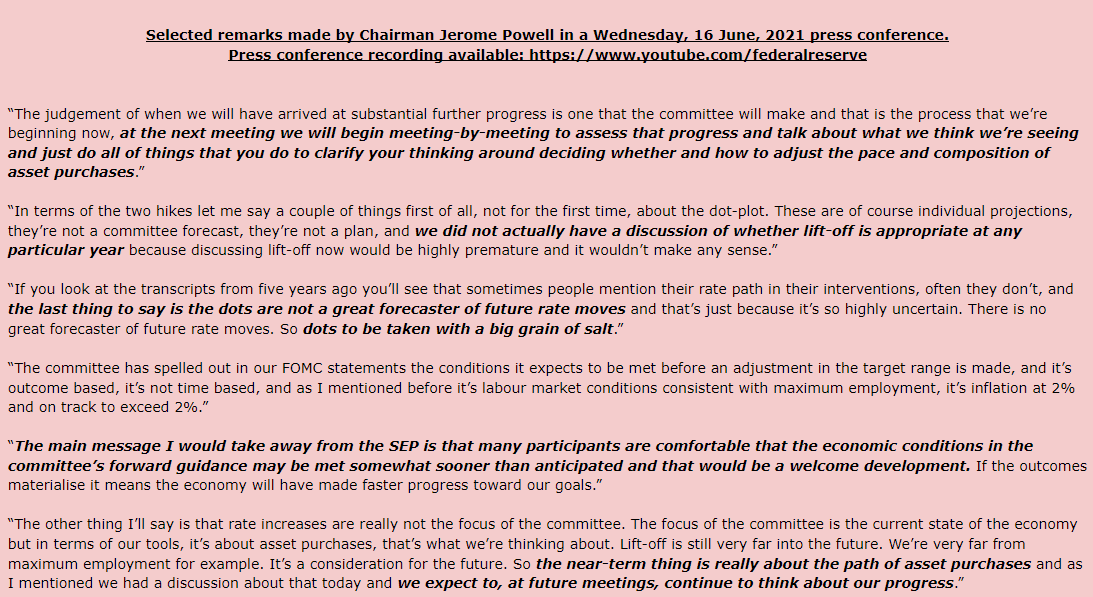 Above: Transcribed remarks made by Chairman Powell in June 16's press conference, a recording of which is available here.

What the Analysts Say

“10yr yields have slipped back under 1.48%. Stocks have come off their record highs since the Wednesday meeting, but yesterday the Nasdaq Composite – composed of tech and growth companies that ought to do less well in a rising rate environment - gained 0.87%.”

“Dollar strength continues to dominate the FX narrative in the wake of the Fed. GBPUSD is lower again with a break of the 100-day moving average to 1.3860. The washing out of longs maybe has some way to go yet and a test of the April double bottom at 1.3660 may be on if there is further for this to correct. Fairly stretched GBP longs and shorts on the USD mean this could have further to unwind.”

"Our current end-Q1 2022 forecast for EUR/USD is 1.2400 so we would make the point that prior to Wednesday’s FOMC we were not uber-USD bears. We do also have an end-2021 forecast of 1.2600 however, and that now seems too high and some adjustment to our levels is required."

"From a technical and momentum perspective there is certainly further scope in the near-term for the dollar to advance. The DXY trendline resistance from the highs in March this year and March last year was broken yesterday at 91.430 providing the catalyst for the gains yesterday after the 1.0% advance on Wednesday."

“The USD is very strong here as the market reprices Fed expectations after the Wednesday FOMC meeting this week. Together with the strong JPY it is the primary focus in FX right here, as EURUSD has become fully unglued and closed yesterday below a key retracement level that suggests a possible run to the interesting 1.1750 area, a kind of “head-and-shoulders" neckline.”

“AUDUSD has broken below major support around 0.7550, etc. The move looks incredibly sharp and may be overdone in the very short-term, but it would take a huge countermove now to shift expectations of more USD strength.”

“Having sliced through several key support levels, gold is currently looking for support at $1769, a level that represents a 61.8% correction of the April to June rally. The road back to relative safety is currently quite long with focus on $1825 followed by $1,838, the 200-day moving average.”

“We see rising risks of sustained US inflation. As FX is mostly driven by central banks this year, the Fed reaction matters. Fed dovishness has been keeping the USD down, but normalization to address inflation risks will support the USD.”

“June has not been kind to GBP as the next phase of easing is delayed. But data continues to print strongly. Longer-term GBP anchors have not deteriorated, suggesting current decline is merely position/hedging related.”

“EUR/GBP has been a favored GBP long, but the cross has found a base as EZ vaccine accelerates.”

“Regional FX is weaker with only the CNH and JPY managing to sustain gains. Asia’s FX performance has dragged on the broader EM complex, although weakness is far more measured than yesterday.”

“The Brazilian real is the only EM currency to have recorded positive results over the last five days relative to the Columbian peso which shed the most value among its developing markets peers. Spot rand struggled to hold its own this week, although it remains up on a year-to-date basis.”

“As noted, the future inflation bar for liftoff would be lower, and markets could plausibly impute that a rapid improvement in the labor market may more clearly translate into an earlier liftoff.”

“The meeting most likely marked the first step of the Fed taking the foot off the gas. The Fed is now signalling two rate hikes by end-2023 and that the FOMC members will continue discussing tapering at upcoming meetings.”

“US Treasury yields rose significantly (especially 5yr) and EUR/USD has declined from above 1.21 to below 1.20.”

“The weak pound has done little to lift the FTSE, with markets continuing to feel the residual effects of Wednesday’s FOMC meeting.”

“The pound has been hit hard in the wake of Wednesday’s FOMC meeting, but a bout of disappointing retail sales figures has further increased the pressure on sterling this morning. Nonetheless, the decline in May retail sales is perhaps more indicative of a shift in spending habits rather than decline, with consumers opting to cut back on food purchases (-5.7%) in favour of eating out.”

Pound-Canadian Dollar Week Ahead Forecast: Vying to Reclaim Top Spot in G10 for … 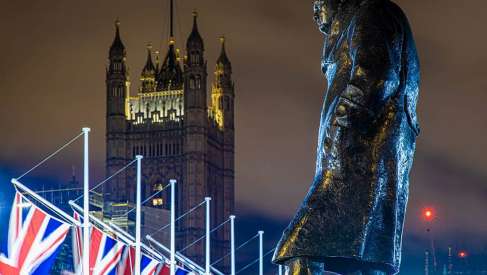 The Pound-to-Dollar rate must navigate an oncoming Bank of England (BoE) policy decision and an important U.S. jobs report, the headlights of which could potentially have a dampening impact on the British currency though recently improving demand Sterling may mean a renewed attempt on the 1.40 level is just a matter of time.

Dollar in Riposte Against Doubters as Headwinds to Outlook Mount

The Dollar came out of the doldrums in a riposte against its doubters ahead of the weekend even as headwinds to the outlook for the U.S. currency loomed larger in the background of a near-month-end trading session. 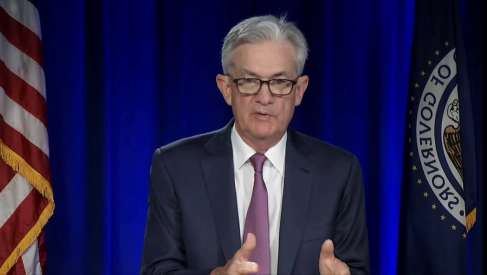 The Pound-to-Dollar exchange rate entered the penultimate session of the week probing the 1.39 handle following overnight Dollar declines that came after Federal Reserve Chairman Jerome Powell took with one hand what the bank itself had previously appeared to give with the other.

Pound-Dollar Rate Hangs in Balance Ahead of Key Fed Guidance

The Pound-to-Dollar exchange rate has pared back half of its June-to-July decline following a robust rebound from last week’s lows but the outlook for it hangs in the balance ahead of this Wednesday’s all-important Federal Reserve (Fed) monetary policy decision.