The Pound-to-Dollar exchange rate (GBP/USD) enters the new week 0.30% higher at 1.3895 and will look to make Monday its sixth consecutive daily advance.

Concerning the immediate outlook, technical resistance could bar its path higher on the charts, but with investors showing signs of having fallen out of love with the U.S. greenback all over again, a further recovery of recently lost ground may be just a matter of time for Sterling.

The Dollar fell against all major counterparts last week, while the Euro continued its April recovery and recently underperforming commodity currencies like the Australian and New Zealand Dollars topped the major currency league table.

The run higher by GBP/USD wasn’t quite enough to get the British currency out of the metaphorical woods however, and it would risk being sidelined unless it can rise above 1.3920, some analysts say. 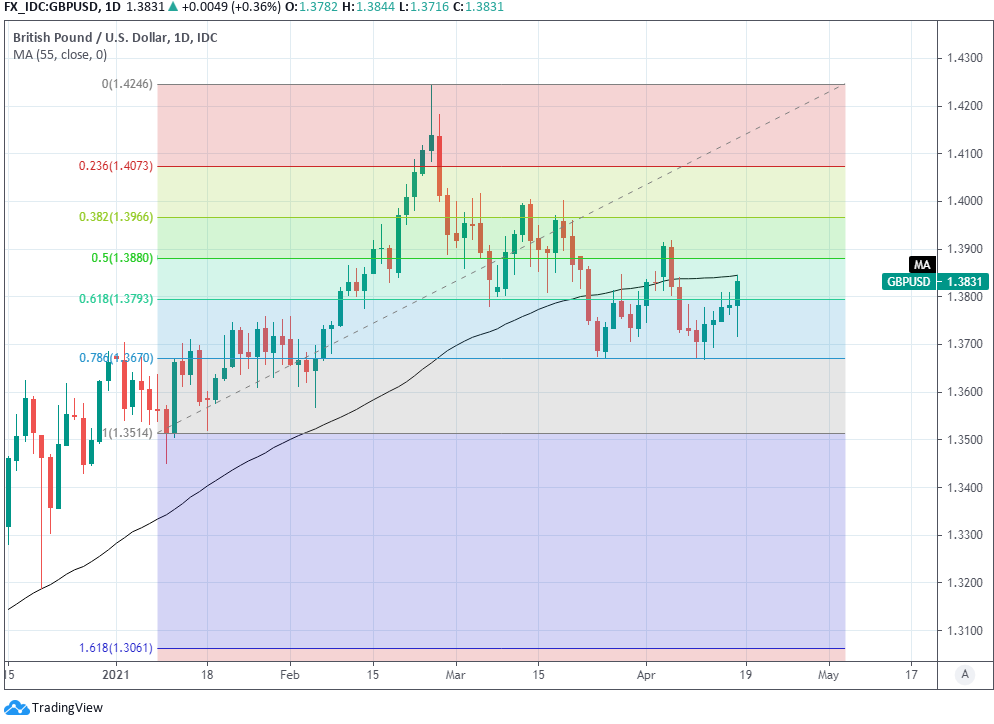 Above: GBP/USD at daily intervals with 55-day average, Fibonacci retracements of mid-January rally.

"In order to reassert upside pressure, the market will need to overcome resistance above 1.3920 and so far remains capped by the 1.3832 resistance line," says Karen Jones, head of technical analysis for currencies, commodities and bonds at Commerzbank. "It is on the defensive and will remain so while capped here."

Sterling rose from 1.3670 to 1.3830 last week, the former being a level at which the exchange rate was bought by Jones, although the Pound hasn’t yet been able to get above the resistances flagged by her or the nearby 55-day moving-average located around 1.3845.

"We look for a test of the 55-day average, price resistance and potential downtrend at 1.3838/55, with fresh sellers expected here at first,” says David Sneddon, head of technical analysis at Credit Suisse.

"Above in due course though can see strength extend back to 1.3919 above which is needed to see a “double bottom” base complete to reinforce our view the decline from the 1.4237 late February peak remains only a corrective phase within the core longer-term uptrend," he adds.

Fortunately for Sterling, Dollars have been sold widely of late in what has been the strongest indication that the U.S. exchange rate rebound of 2021 has all but run its course.

"It’s an increasingly negative USD outlook," says Brian Daingerfeld, head of G10 FX strategy U.S. at Natwest Markets. "Stronger US growth expectations are already priced in. Chatter about a possible Fed taper will build through the summer, but this is unlikely to be the focus for the next few months."

U.S. inflation has spiked while retail sales are roaring and jobs have come back to North American labour market.

The recent run of stronger than expected U.S. economic figures, rather than whipping up further demand for the Dollar, at least appears to have inspired something like a ‘sell the fact’ response among investors to what are clear indications of a U.S. economic recovery being underway.

This has benefited the Pound, Euro and many other currencies.

"The softening in US Treasury yields has been the big surprise," says Chris Turner, global head of markets and regional head of research at ING.

"With US money market rates on the floor as US bank reserves held at the Fed approach US$4trn, and Treasuries seemingly less of a threat to risk assets, we favour a gently lower dollar this coming week," he adds. 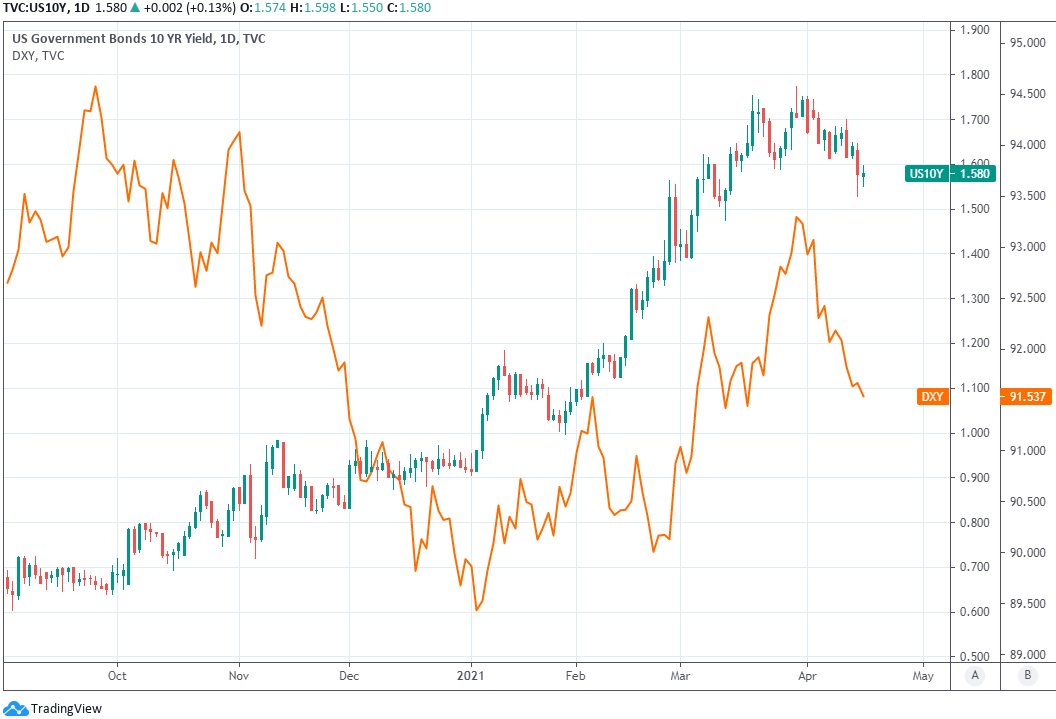 Despite the strong data, longer-term U.S. government bond yields declined last week and many analysts have cited this as a source of the Dollar’s renewed weakness, though it may have helped that Federal Reserve (Fed) policymakers have continued to emphasise that they won’t be tempted into raising interest rates or other policy changes by a mere spike in inflation metrics.

The Fed’s stance on inflation and interest rates is corrosive of the ‘real yield’ paid to holders of U.S. government bonds as well as a burden for the Dollar, even more so in light of recovering economic momentum, which can lift inflation and expectations for inflation while in the process taking a further bite out of expected returns for many U.S. Dollar holdings.

Dollars were bought widely and increasingly over the first quarter, with demand eventually helping to turn Sterling back from multi-year highs about 1.42 in late February, but investors have appeared to have fallen out of love with the greenback even as U.S. economic recovery prospects have gone from strength to strength.

“The sharp drop in UST yields does diminish a yield-driven bounce for the dollar. In a scenario of a broadening of global optimism, we prefer high-beta growth-sensitive G10 currencies,” says Lee Hardman, a currency analyst at MUFG. “More balanced flows for the US dollar appear likely given much of the good economic news is now priced.”

Improving U.S. growth prospects are also bullish for the global economy as well as for alternative currencies that stand to benefit from a reflation of it.

The latter is something that could potentially induce investors into selling Dollars in exchange for currencies which can buy higher yields assets offered elsewhere in the world. 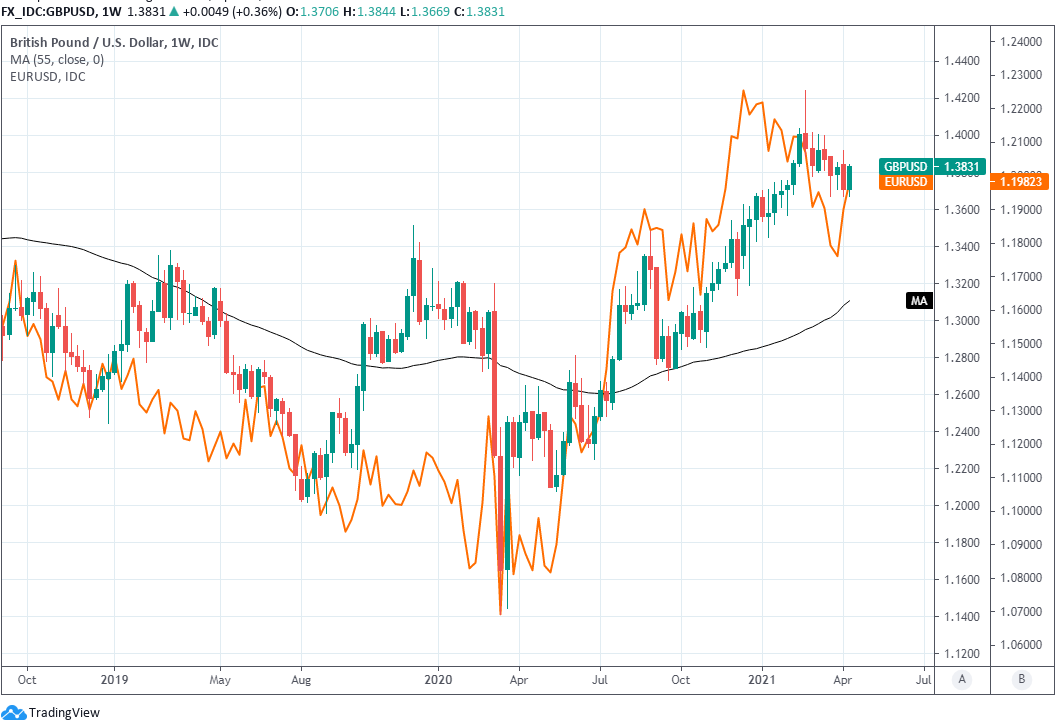 The Dollar has been sold heavily in April, leading it to hand back much of 2021’s appreciation, though with European and commodity currencies like the Australian and New Zealand Dollars having also drawn a fresh bid it could be the case that recent weakness is more of a seminal turning point for the greenback than it is any fly-by-night correction.

Pound Sterling still managed to get the better of the U.S. Dollar last week even while ceding ground to a range of other currencies, though it may find inspiration for another extension higher toward the latter end of the week in the raft of economic data due out of the UK and potentially also from developments elsewhere in the European currency complex.

"The UK data (this) week should give some meaningful support to GBP and with USD appearing to lose some steam, GBP should grind towards the 1.4000 level," says Petr Krpata, chief EMEA strategist for FX and interest rates at ING.

"GBP now screens undervalued both vs USD and EUR on a short-term basis. With EUR/USD recovering, this should also contribute to GBP/USD moving back above 1.40,” he says.

There are no major U.S. economic figures due out this week although the UK calendar includes unemployment figures on Tuesday and March inflation numbers on Wednesday, both due out at 07:00, while the latter is followed by remarks from Bank of England Governor Andrew Bailey about “diversity in market intelligence” at an online event scheduled for 11:30 mid-week.

This week’s most important data due from the UK will not be released until Friday when retail sales figures for March and IHS PMI surveys of the all-important services and manufacturing sectors are out at 07:00 and 09:30 respectively.

Before then however, the Pound-Dollar rate may benefit if Thursday’s European Central Bank (ECB) decision proves supportive of the single currency.

Sterling often tends to follow the Euro-Dollar rate, which accounts for more than half of flows measured by the ICE Dollar Index.

The latter means that gains for the Euro can also act as a ball and chain around the ankles of the greenback, in addition to offering the Pound-to-Dollar rate a lift.