The Dutch-based international lender and financial services provider tell clients in a weekly briefing that current U.S. Dollar weakness is to be temporary as the U.S.
economy will strongly outperform the eurozone, the UK, Japan and other economies.

"In addition, we expect real yields to remain supportive for the dollar going forward. We think that the Fed will be slow to start hiking rates, but this will be well before
the ECB, the Bank of Japan and the Swiss National Bank. Therefore, the dollar should strengthen over time," says Georgette Boele, Senior FX Strategist at ABN AMRO.

The Dollar rallied sharply in the opening months of 2021, lead by a sharp rise in the yield paid on U.S. government bonds of above 5 years in duration.

The rally in bond yields was a signal that investors were preparing for higher inflation rates in the U.S. over coming months and years as the country's economic recovery accelerated.

But the Dollar has given some of that value back over the duration of April with losses against the Euro amounting to close to 2.0% already, as EUR/USD goes back above 1.19.

The currency has meanwhile maintained a steady trade against the Pound, with the Pound-to-Dollar exchange rate quoting at 1.3788 at the time of writing, which puts it close to the month's opening level.

Over the course of the past week the Dollar is the G10's worst performing currency, having fallen against all its major peers: 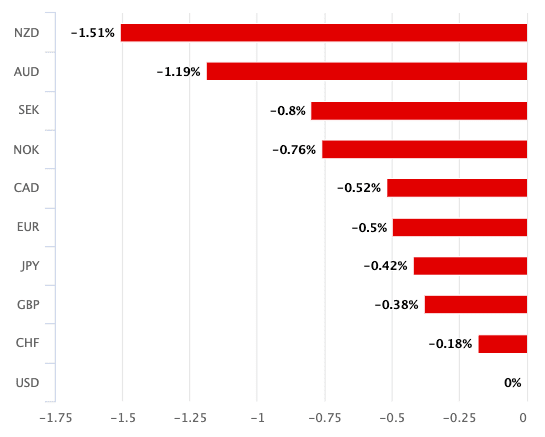 Although ABN AMRO expect the Dollar to reestablish that advance seen in the first quarter, subsequent gains are likely to be less aggressive.

"The rally will unlikely have strong momentum," says Boele, "the pace of the dollar rally will likely be modest".

The rise in ten-year bond yields is expected to be limited, mainly driven by lower inflation expectations and not by higher nominal yields.

Financial markets are meanwhile expected to have mostly anticipated the strong economic outperformance of the U.S. versus other countries.

"US data now needs to show this playing out," says Boele.

Another reason to expect a more gentle slope of appreciation is that the start of the Fed era Reserve's rate hiking cycle is already reflected in the price of the Dollar.

In addition, some investors are still concerned about the large U.S. fiscal deficit and the current account deficit.

A fifth reason cited by ABN AMRO is investors are in a wait-and-see mode, resulting
in lower activity.

"Because of these dynamics, although the dollar will strengthen, it is unlikely to rally strongly," says Boele.