The Pound-to-Dollar exchange rate has scope to recover in the coming weeks some analysts say, having regained its composure following last week's corrective sell-off in mid-week trade.

Sterling has staged a tepid recovery following last week’s dip beneath 1.37, concurrent with a turn higher by the Euro and broad losses for the Dollar, which was the worst performing major currency of the week on Wednesday.

“If there is life in the GBP, it should be able to push higher in the next week or so towards the mid/upper 1.38s,” says Juan Manuel Herrera, a strategist at Scotiabank. “We think sterling regaining the upper 1.38s/low1.39s will turn a stabilizing trend in Cable into a more bullish prognosis (for 1.4150/75).”

Dollar losses come as the U.S. bond market takes a host of strong economic figures and the Federal Reserve's (Fed) bullish outlook in its stride.

Inflation came out ahead of expectations this Tuesday as well as hard on the heels of the March non-farm payrolls report, which showed the economy creating almost 50% more jobs than had been anticipated.

Despite this longer-term U.S. bond yields have remained some way off from March highs while the Dollar has been denied a fresh lease of life when previously, though mainly through last month, strengthening U.S. data had lifted yields back to pre-pandemic levels and shocked the greenback into life.

“Recent price action for the US dollar has been disappointing as it has failed to strengthen on the back of stronger than expected US economic data releases. The pattern was repeated again yesterday following the latest US CPI report,” says Lee Hardman, a currency analyst at MUFG. “The Fed’s continued commitment to loose monetary policy remains a key assumption behind our view that it is still too premature to expect a sustained US dollar rally."

Inflation data followed an influential survey index which indicated that U.S. services sector activity reached an all-time high in March, while there is an even stronger recovery for the job market and economy still working its way through the pipeline according to Fed Chairman Jerome Powell.

Powell told CBS Newshour on Monday that America’s labour market could create or recover from the coronavirus as many as one million jobs in some months over the coming quarters. He said; “We feel like we're at a place where the economy's about to start growing much more quickly and job creation coming in much more quickly,” but emphasised that the Fed won’t be spooked into panicky changes of its policies in remarks that have since been echoed by other Federal Open Market Committee members.

This is an incentive for investors to sell Dollars and one that’s likely to grow larger over time as the economy recovers, which is supportive of Sterling.

The Fed’s stance results from a new policy strategy that has it looking to lift inflation above the 2% target for an unspecified period, in what is a bearish development for the Dollar because it ensures that rising prices will eventually eat the little modicum of yield still offered by U.S. government bonds.

“Having seen GBP/USD rebound from the 100Day MAV at 1.3699 look for the cross to head back towards the 50Day MAV at 1.3860,” says Jeremy Stretch, head of FX strategy at CIBC Capital Markets. “Should the ECB President Lagarde reiterate the bank’s dovish credentials in her upcoming ‘fireside chat’, from 10:00ET, this should preclude EUR/USD getting near 1.1980/90.” 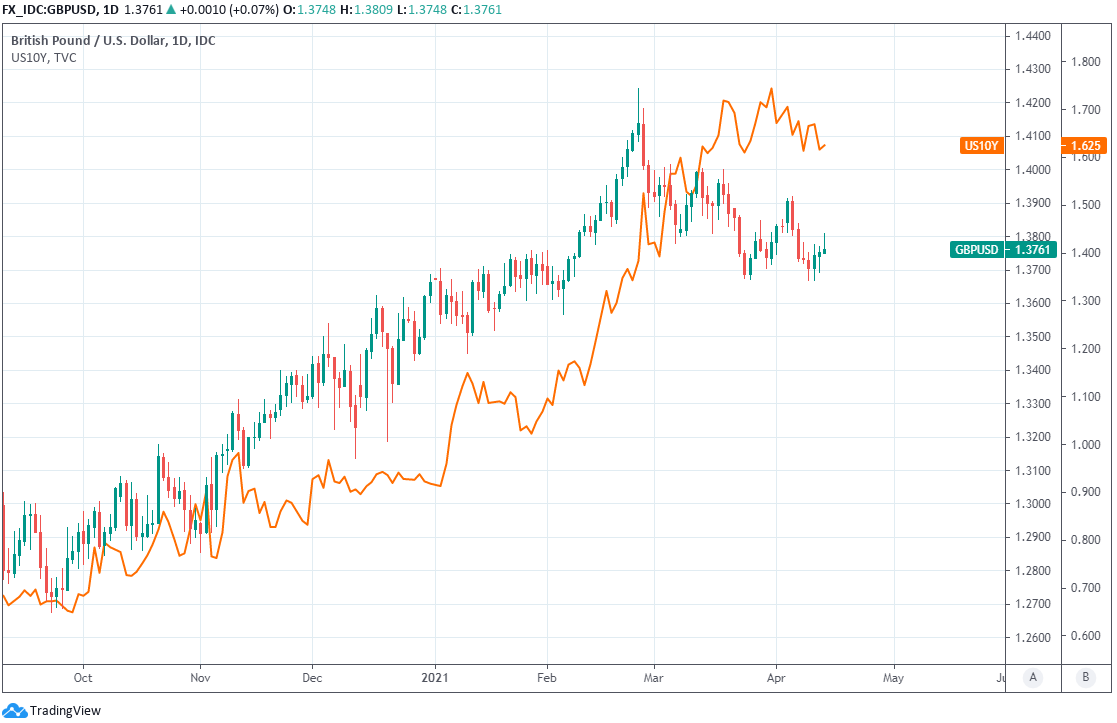 This is at the least likely to narrow the gap between the Fed and other central banks when it comes to eventual increases in interest rates.

“Clarida mentioned the importance of inflation data at the end of this year will be key to whether the expected uptick in inflation in coming months is transitory,” says Kevin Cummins, chief U.S. economist at Natwest Markets. “He said “We would expect those to be transitory and as the year progresses and we go into next year, if they’re not, then we’ll have to take that into account.

This is likely contributing to nascent widespread losses in Dollar exchange rates, which were previously pumped up by expectations of an exceptionalist performance from the U.S. economy that would supposedly enabled the Fed to begin lifting interest rates well before other central banks.

Investors are betting there’s around a 50:50 probability the Fed will lift rates by the end of 2022, but for this to happen the bank would first need wind down its $120bn per month quantitative easing programme.

And given the necessarily gradual pace of such an exercise, this may need to begin by year-end if the market's timeline is to be met.

That leaves a lot to be determined by inflation data and other economic figures through the year, with little room for sustained or serial disappointment. 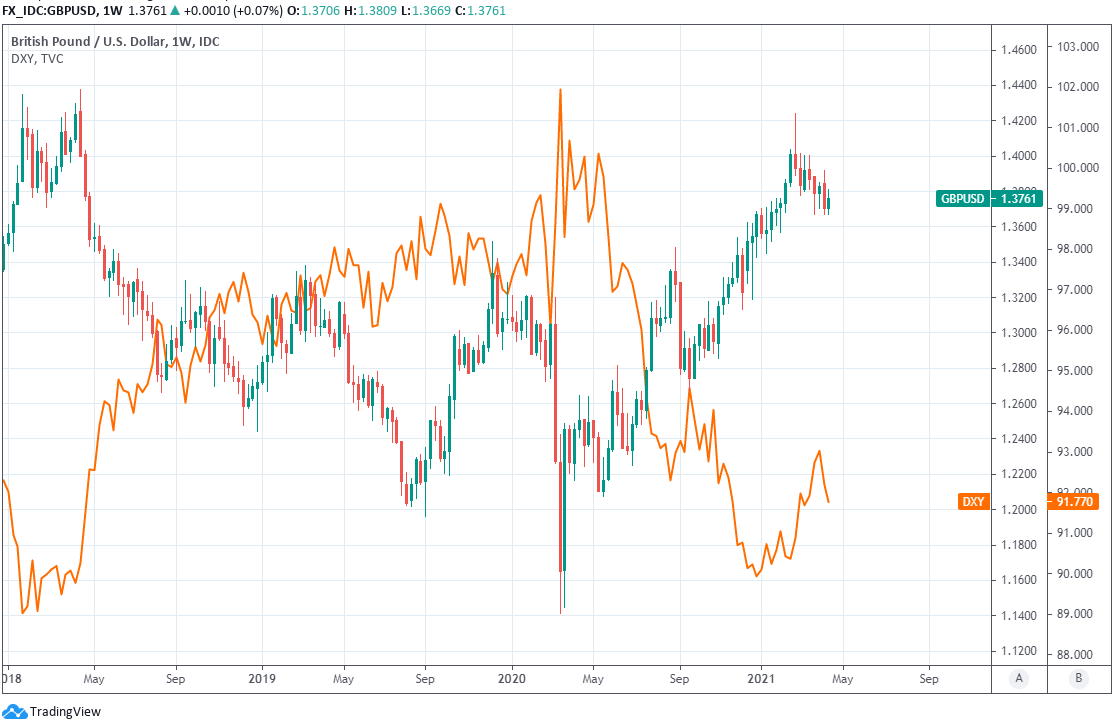 The Dollar’s nascent troubles have helped to pick the Pound-Dollar rate up off the floor though analysts say it’s not out of the woods yet.

“Down the line, we still expect to see the USD resume its rally against the key funding currencies, and we are looking to fade rallies in EURUSD towards 1.20 as one example,” says Shahab Jalinoos, head of FX strategy at Credit Suisse. “So far in April, GBP has been one of the few major currencies to lag the USD. In our view, this was mostly linked to a technical reversal of extended long positioning. We have been consistent supporters of the long GBP view in 2021.”

The Pound has steadied in the wake of last week’s wobble though the tentative recovery may owe itself as much to the fact that Europe’s single currency has sustained last week’s recovery. Euro-Dollar has risen from 1.17 to trade convincingly back above 1.19 with the bearish prosecution of the single currency appearing to run aground somewhat as vaccinations have picked up and are increasingly expected to become more widely available in the months ahead, especially in Europe's major economies.

Meanwhile, Goldman Sachs said this week it has “rising confidence in their forecast for a mid-year surge in growth” and warned of upside risks to its forecast for a Euro-Dollar rate of 1.21 in three-months.

“No strong view on sterling at the moment but we are starting to get a little more bearish on the USD at this juncture (favorites are EUR and CAD) especially after the CPI reaction and the resulting price action in US fixed income. Look to buy dips on the day in GBPUSD 1.3725/35 area,” says a trader on the London FX desk at J.P. Morgan in London. “I added back some longs yesterday having reduced pre inflation print and the price action looks positive. A EUR/USD break of 1.1970/90 would likely bring in more interesting levels above 1.2030.”