Investors gave the Pound a wide berth although with stock and commodity markets also lower in response to rising infections and prolonged or renewed restrictions in parts of Europe and Asia. Delayed deliveries of the Astrazeneca vaccine to European countries may also have darkened the mood, while highlighting how limited manufacturing capacity could complicate the process of vaccinating populations elsewhere.

However, and with the short-term effect that these developments have on risk appetite to one side, they also underline Sterling's credentials for outperformance given how nearly 10% of the UK's population had already had a first dose of a coronavirus vaccine on Friday. Vaccination leadership is one of the reasons why some analysts remain bullish in their outlooks for the Pound-to-Dollar rate, looking for new multi-year highs in the coming weeks.

"We think that it should continue to push above 1.37 thanks to the rollout of vaccines— notwithstanding some near-term weakness on longer-lockdown concerns," says Juan Manuel Herrera, a strategist at Scotiabank. "GBP still holds a strong bullish trend. Sterling found good support in the mid 1.36s area before re-testing 1.37 earlier in the session and then quickly dropping back to ~1.3650/60 that will stand as key support intraday to be followed by Wednesday’s low of 1.3624. After the 1.3690/700 area, its Thursday high of 1.3746 will act as resistance." 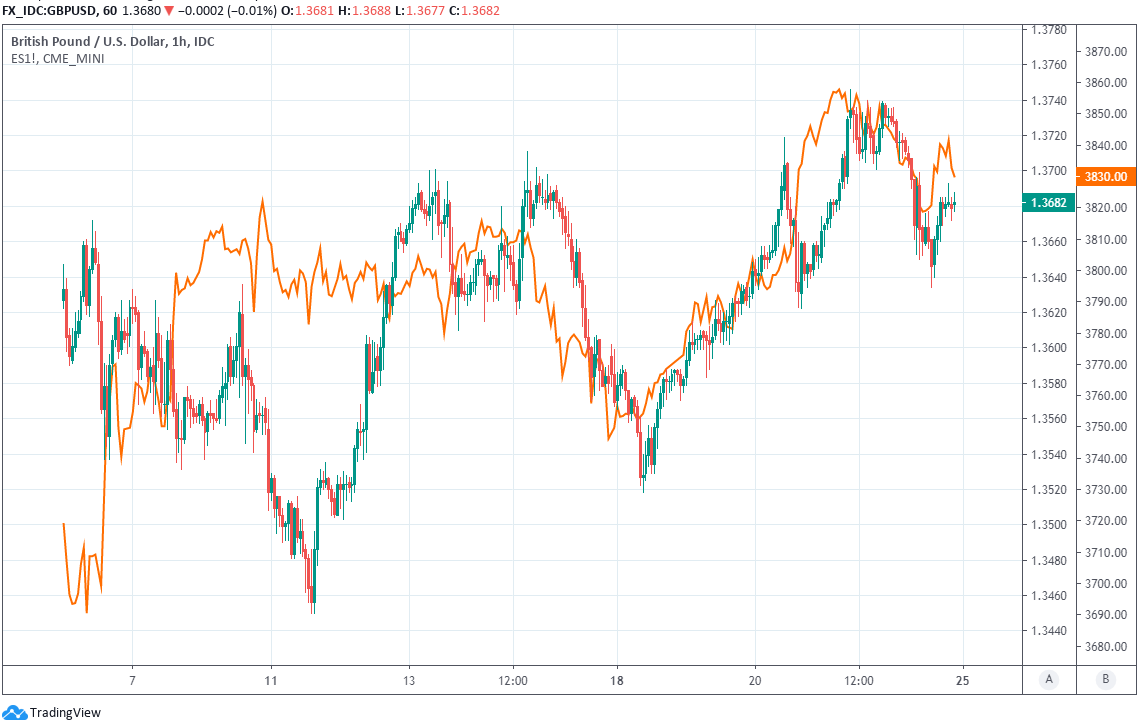 Britain's large order book and early start in vaccinating mean it could be among the first to reach herd immunity if innoculations prove effective in preventing the spread of the virus, which would offer the economy a headstart in the global recovery that's anticipated for later in 2021.

"The UK is a clear front runner in terms of how quickly it is getting its population vaccinated," says Shahab Jalinoos, head of FX strategy at Credit Suisse. "This leaves room for a strong bounce in the economy from Q2 onwards as the odds of lockdowns being lifted are likely to surge."

But on Friday the market was focused on the damage that might yet be done by containment measures as vaccines are slowly made available, which is something that will be in sharp focus for Sterling early in the new week when November's unemployment data is released at 07:00 on Tuesday.

The data will provide insight into damage done by the second 'lockdown,' which is pertinent in light of January's third shutdown and could draw more scrutiny than it otherwise might have if not for last week's PMI and retail sales data bringing the fragile state of the UK economy to the top of mind for investors.

"The UK labour data could underscore the risks of a double-dip recession and thus warrant caution on the GBP," says Valentin Marinov, head of FX strategy at Credit Agricole CIB. "The January Fed meeting will be the main event next week with investors keen to see how the fiscal stimulus plans of the Biden administration would impact the FOMC outlook. We think that Fed Chairman Jerome Powell will continue to push against any notion of premature taper...In general, we see a risk that, following the recent rally in risk assets, there is scope for some underperformance as the market digests the new information."

With UK data aside the Pound-to-Dollar exchange rate will be driven by the ebb and flow of investors' appetite for risk assets and the implications for the Dollar, which will itself be a function of Wenesday's Federal Reserve policy decision as well as horse trading in Washington over President Joe Biden's stimulus bill.

"The close above 1.3712 on a daily chart closing basis pushes the 1.3836 February 2016 low to the fore. Longer term the 2018 peak at 1.4377 is being targeted. We note the 13 count on the 60 minute chart and will attempt to buy the dip," says Karen Jones, head of technical analysis for currencies, commodities and bonds at Commerzbank. "While dips hold over 1.3520 GBP/USD remains bid. Below 1.3520 would alleviate immediate upside pressure for losses to the 1.3350 late December low." 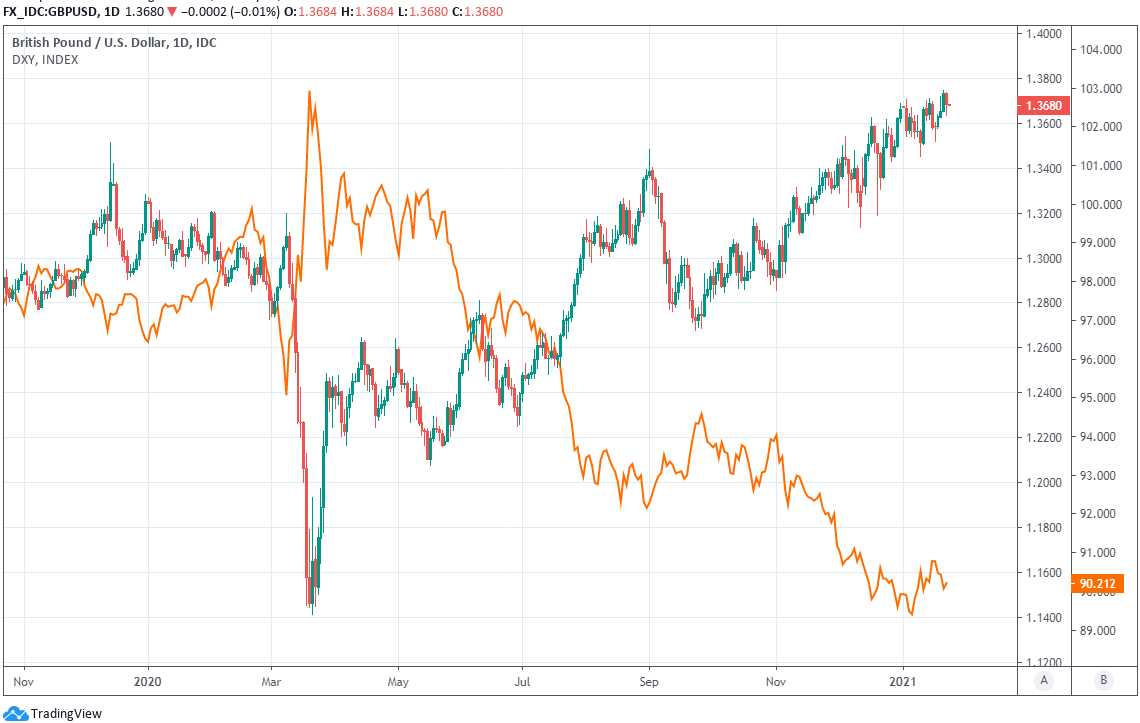 "Next week will be important for shaping expectations on fiscal stimulus and the ultimate direction of the US dollar," says Derek Halpenny, head of research, global markets EMEA and international securities at MUFG. "Our sense is a package that sees the USD 2,000 stimulus cheques and the size of state and local funding whittled down is most probable. A revised package of approx USD 1.0-1.2trn is around what’s expected. Anything outside of that could see yields respond. We’d expect less immediate reaction in FX but hold to our view that steps that lift inflation expectations will keep the US dollar on a weaker footing."

President Joe Biden needs to persuade 10 Republican senators to back his $1.9 trillion bill for it to gain Congressional approval and become law, which leaves him vulnerable to any demands to reduce its size in some areas. A larger than expected reduction in the size of the bill could further upend stock markets, lifting the U.S. Dollar and weighing on GBP/USD in the week ahead.

Meanwhile, Wednesday's 19:00 Fed policy decision is a downside risk for the greenback and and a potential source of midweek support for the Pound-to-Dollar rate if Chairman Jerome Powell is able to assuage investors' concerns about a possible premature end to the bank's $120bn per month quantitative easing programme later this year.

"On the one hand, focus will return to the Senate and whether Biden’s $1.9trn stimulus plan can progress in its current form – or has to be dismantled. With cash holdings at the lowest levels since 2013, a stuttering stimulus plan may be risk negative/dollar positive," says Chris Turner, global head of markets and regional head of research at ING. "On the other hand, Wednesday’s FOMC meeting should see the Federal Reserve retain its dovish outlook and recommit to buying $120bn of assets per month until substantial progress has been made towards its goals. This is a dollar negative."

Some Fed rate setters suggested this month that a late-2021 or early-2022 taper of the program is possible, which lifted bond yields and the Dollar.

U.S. GDP data is expected to show the world's largest economy growing at an annualised pace of 4% in the final quarter when it's released at 13:30 on Wednesday, although it's not clear the impact that such an outcome would have on the Dollar or the GBP/USD rate. On the one hand it would underline the comparatively better fortune of the U.S. economy when stood next to Europe's, although on the other hand, this week's horse trading in Washington matters more for the economic and U.S. Dollar outlooks.

With Sterling suffering a setback on Friday just as economic data paint a gloomy picture of the New Year economy, the stage may have been set for a period consolidation by the Pound-to-Dollar rate. However, the big picture remains that the UK is leading in its coronavirus vaccination effort and the broader technical trend on the charts is turning increasingly bullish, leading multiple analysts to suggest that new multi-year highs are in the pipeline for the weeks ahead.

Above: Pound-to-Dollar exchange rate at weekly with Fibonacci retracements of 2018 downtrend.