The Pound to Dollar exchange rate (GBP/USD) has rallied sharply over the course of the past 24 hours and is close to the multi-month highs reached on Jan. 01.

Should momentum remain positive, Pound Sterling could break to its highest level since April 2018 in coming hours or days.

The January 01 high is located at 1.3704, which was the strongest level attained by the exchange rate since May 2018.

GBP/USD reached 1.3693 on Wednesday amidst a broad-based rally in Sterling triggered by signs the Bank of England is not likely to introduce negative interest rates anytime soon.

Markets had started to convince themselves that the UK's central bank was more likely than not to cut interest rates to 0% or below by August, given that the lockdown restrictions put in place on January 03 have most likely triggered another economic recession. 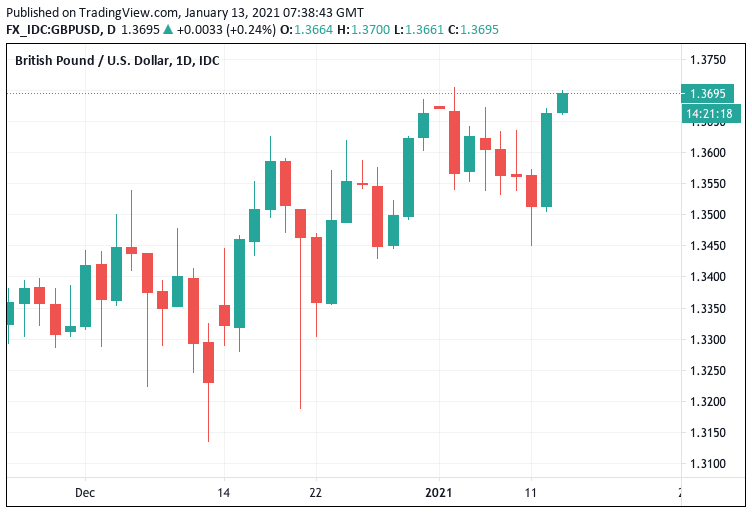 Above: GBP/USD since December

However, two senior Bank of England figures came out and said on Tuesday they were still opposed to the drastic move of cutting interest rates into negative, instead preferring to see the shape of the economic recovery now that a vaccination programme was well underway.

The global backdrop matters too, with the U.S. Dollar tending to underperform as stock markets rally. Demand for the Dollar has steadily waned over recent months as investors look through the current pandemic to a broader global economic recovery in 2021 and 2022, diminishing the currency's attractiveness.

Most economists we follow - and indeed the consensus - estimate a sharp rebound in global economic growth will transpire in 2021, a belief that is shared with a market eager to seek out the strong returns on offer in global equity markets.

The Dollar is considered a 'safe haven' and tends to find demand when investors are exiting bets on stock markets and seeking cash. Furthermore, economists say the exceptional U.S. economic outperformance of recent years - something that aided the U.S. Dollar during the Trump years - might also soon fade.

"We think the greenback's downtrend should remain intact as long as global recovery prospects stay in focus," says Mark Haefele, Chief Investment Officer Global Wealth Management, UBS AG. "We expect further COVID-19 vaccine rollouts to support an economic and earnings rebound that should see the global economy expand by more than 6% this year."

Economies hit particularly hard by the covid crisis are meanwhile tipped to bounce back sharply once vaccines take hold.

The UK has been hit particularly hard by the crisis, but economists say the bounce-back effect will be significant.

And historically speaking, the Pound tends to benefit during times of global economic expansion.

"The Pound is a currency that historically operates strongly when the economy does well. Of all the major currencies it is the only one that doesn’t need a weak currency to operate well and is not really threatened by trade wars or the prospect of the currency strengthening," says David Mercer, CEO of LMAX Group.

The Pound's reaction to the December 24 EU-UK trade deal was not particularly enthusiastic, with the currency managing to rally into year-end but then slump as 2021 got underway.

Some analysts had said this was a typical 'buy the rumour, sell the fact' reaction to the Brexit deal. This trading strategy, when combined with the lockdown announced on Jan. 03 could well have combined to Sterling's lacklustre start.

However, with Brexit out of the way and vaccines being rolled out, sentiment could be lifted off the rocks.

"With Brexit out of the way and potentially moving to a safe haven environment, the Pound – as a major currency – can do well," adds Mercer.