The Pound-to-Dollar exchange rate rallied last week but failed to overcome a key technical obstacle on the charts and could be due a setback in the coming days amid the creeping prolongation of lockdown restrictions in the UK and elsewhere, which are seen offering support to the greenback.

Sterling closed a third consecutive week of gains over the Dollar on Friday but failed for a second time to overcome the 1.3310 level, which coincides with a notable Fibonacci retracement of September's correction lower, which some technical analysts have interpreted as a bearish omen.

The Pound enters the new week facing immediate pushback from the Fibonacci retracement at 1.331 and will have to contend immediately on Monday with the imminent announcement from Prime Minister Boris Johnson of an extension to the national lockdown through December in all but name.

Economists already expected GDP to contract -6% month-on-month in November due to the current restrictions, which was already enough to imply a modest quarterly contraction although a further month of disruption could mean the final quarter recovery is now a write off.

The UK isn't alone in facing tighter restrictions for longer as Germany was also on course for another month of lockdown this weekend while U.S. cities and states began to follow in the footsteps of European capitals last week, after reported infections clocked repeated new daily highs. Meanwhile, a U.S. Treasury raid on the Federal Reserve (Fed) cast further doubt over the outlook for fiscal stimulus and the bipartisan cooperation needed to produce it.

"For the USD, we’re neutral tactically and bearish strategically. Short USD is still too popular of a trade even if the short skew in positions has been reduced to a degree. Risk-off means that the reduction in USD shorts continues," says Bipan Rai, North American head of FX strategy at CIBC Capital Markets. 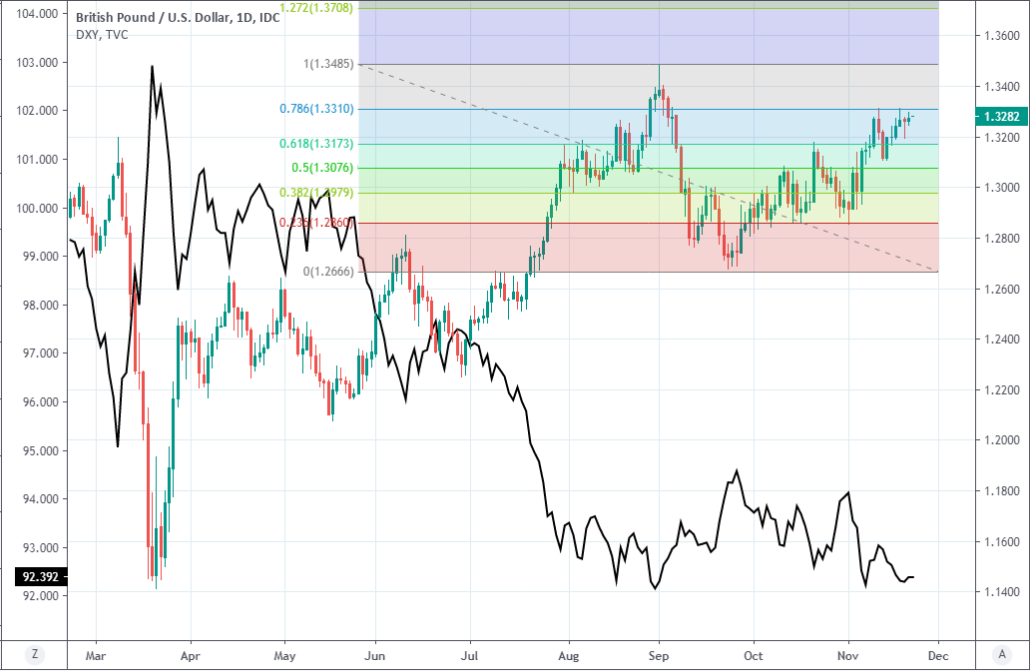 The U.S. passed the grim milestone of 12 million cases of coronavirus while hospitalisations hit a record high, leading to renewed containment measures that marred an otherwise supportive backdrop for risk assets. The darkening economic backdrop is fertile ground for a stabilisation of a safe-haven U.S. Dollar that rose against many rivals on Friday.

"Investors continue to reassess the risk of stricter containment measures against the optimistic prospects of a vaccine. This dichotomy may prove to be a zero-sum game for markets at the moment and we could see risk sentiment face further stabilization," says Chris Turner, global head of markets and regional head of research at ING. "The lack of conclusions from the ongoing UK-EU negotiations suggest a lack of meaningful moves in GBP/USD at this point."

The greenback rose and the S&P 500 fell  -0.53% even after Pfizer and BioNTech said they would be applying before the weekend for emergency use authorization from the Food and Drug Administration (FDA) for their developmental immunisation product, suggesting vaccine progress may now be in the price of assets. The FDA said at the weekend that it's granted emergency use authorisation for Regeneron's antibody cocktail, which President Donald Trump was reported to have taken during his battle with the virus in October, although it's not clear that this will support stock markets in the same way other vaccine developments have in recent weeks.

"FX price action seems to be dominated by recovering risk appetite but also by growing concerns about the US outlook," says David Forrester, a strategist at Credit Agricole CIB, "Next week’s data releases could determine whether the latest risk rally will last. In particular, any further disappointments from global PMIs could fuel fears that the Covid vaccines have arrived too late to avert another downturn. With no clear signals yet that official stimulus is forthcoming, any data disappointments could weigh on risk-correlated currencies and boost safe havens. A growing market focus on USD refinancing needs into year-end could support the currency."

European investors will also digest IHS Markit PMI surveys for November on Monday, with the latter providing an estimate of the damage done to continental recoveries by stronger virus containment measures. A bad set of PMIs could be enough to see risk currencies start the week on the back foot, although with the U.S. Thanksgiving holiday and closure of public markets beginning Thursday, profit-taking could remain a theme this week. European PMI surveys are due out between 08:15 and 09:00 on Monday while the UK equivalents are set to be published at 09:30. Brexit negotiations and the HM Treasury's Wednesday spending review will also garner attention from the Pound.

"I think there's a good chance that IF a deal is agreed next week we will see EUR/GBP fall to around 0.85 and GBP/USD rise to around 1.40 in time for me not to go skiing over the Christmas holidays," says Kit Juckes, chief FX strategist at Societe Generale. "There ought to be much more upside from here from doing a better Brexit than feared, than doing a bad one. I have no more idea today of where the next piece of really sterling-friendly news will come from, any more than I did on the day after the UK Government bailed out RBS, or after the exit from the ERM in 1992. But from these depressed levels, it won't take much to get sterling moving higher. My hope is that we start the process by reaching, at the very least, a modest trade deal with the EU.