The Dollar steadied Friday as safe-haven and Euro satellite currencies softened amid concerns over the EU's budget, depriving them from participation in a rally among risk assets as a spat between the Federal Reserve (Fed) and Treasury loomed large over the U.S. economy.

Dollar exchange rates were a mixed bag at the Friday close as Pound Sterling, the Australian and New Zealand Dollars as well as the oil and equity-linked Norwegian Krone advanced on the greenback while the Euro eased lower.

The Euro's slip helped the Dollar Index rise just more than 0.10%, cutting its weekly decline to -0.36% by virtue of the single currency's 57% share of flows covered by the index. This helped pull the Swedish and Danish Kroners lower.

Increasingly, many of the signs are that Dollar exchange rates are on course for at least a short period of consolidation, which could give the appearance that a bottom is forming for the Dollar Index and a top for the Euro, as well Euro-correlated currency pairs like the Pound-to-Dollar exchange rate.

"The [Dollar Index] should slip into year’s end with surging US cases and a lack of fiscal support paving the way for a dovish Fed pivot in Dec. But it’s not clear a breakdown is imminent and DXY shorts do not offer great appeal at current levels, at least while the implementation of the EU Recovery Fund remains delayed, until the Dec ECB meeting is out of the way and a Brexit deal is reached," says Richard Franulovich, head of FX strategy at Westpac. 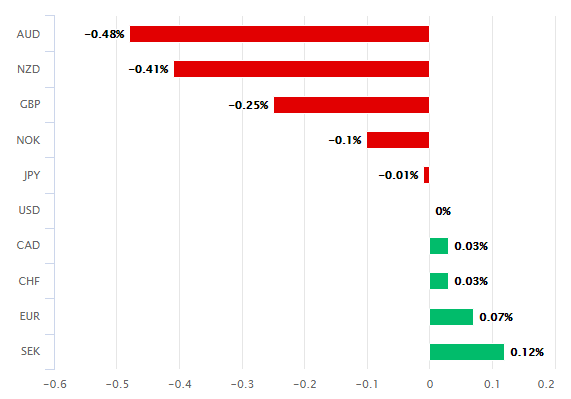 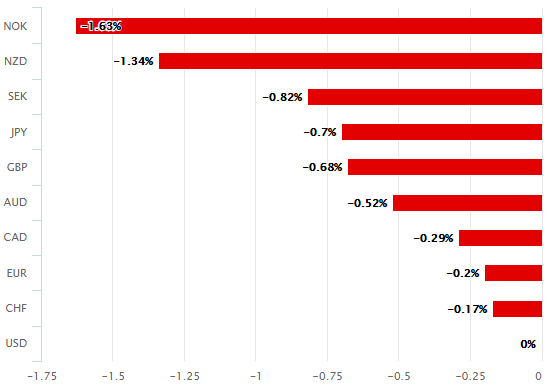 Above: U.S. Dollar performance against major rivals on Friday (left) and for the week (right). Source: Pound Sterling Live.

"The US dollar on a DXY basis is very close to year-to-date lows but the escalation of COVID infections and renewed GDP contractions in Europe is now limiting the appetite for fresh selling," says Lee Hardman, a currency analyst at MUFG. "Reduced appetite to sell the dollar is understandable but we are convinced investors will view any sell-off of non-dollar currencies versus the US dollar as opportunities to buy."

Friday's price action played out against a backdrop of rising stock and commodity markets that were enthused with optimism about the seemingly improved prospect of the global economic recovery being rescued from renewed 'lockdown' by a coronavirus vaccine. Pfizer and BioNTech said Friday they would be applying before the weekend for emergency use authorization from the Food and Drug Administration (FDA) for their developmental product, while Moderna will reportedly follow suit in the coming weeks.

But the all-important Euro got little help from vaccine developments, despite major European economies spending November in 'lockdown,' as the continent headed for another ugly spat between national leaders that risks delaying the widely celebrated coronavirus recovery fund as well as blocking the EU's next seven-year budget.The Euro has underperformed since Chancellor Angela Merkel said Wednesday that Poland and Hungary have vetoed the package.

"We’d sell [Dollar Index] into strength above 94 if seen targeting a break of 92 on a 3 month horizon," Westpac's Franulovich says. 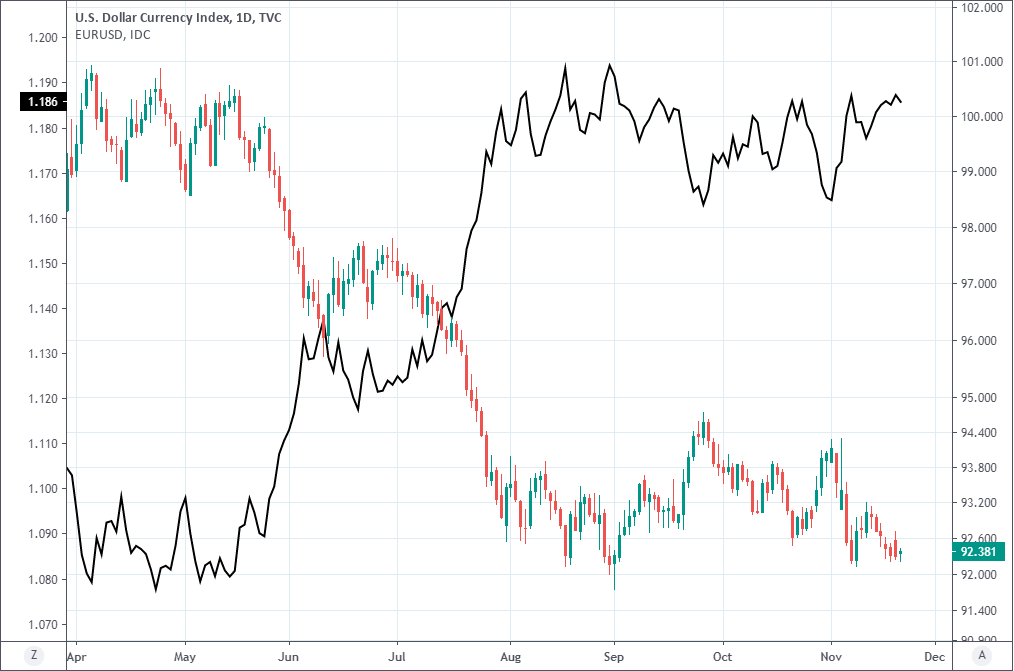 Coronavirus is resurgent in the U.S. and with the election now out of the way cities and states have begun to tighten restrictions, with New York announcing the closure of schools and city officials warning that a renewed closure of bars and restaurants could be in the pipeline. Others in the U.S. took action this week too, all against the backdrop of a deteriorating outlook for government financial support of companies and households, which is a bad omen for the U.S. as well as global economies.

"The vaccine news is very encouraging, but it will not prevent shutdowns nor will it magically allow the Fed to lend to Main Street," says Mazen Issa, a senior FX strategist at TD Securities. "There is a risk that the economy and asset markets will go without a backstop, with neither emergency lending facilities nor even fiscal aid at a time when US macro momentum is headed south and Covid cases surge, while restrictions start to bite."

Counterintuitively, U.S. economic risks are often supportive of the Dollar and especially in an environment of simultaneous global decline given the greenback's reserve status and America's share of the global economy. The U.S. is the number one export market for the Eurozone behind only the United Kingdom, which was yet to secure a Brexit deal on Friday, so adverse impacts on the U.S. growth outlook are relevant considerations for the single currency.

"To say there is a sense of Brexit fatigue is an understatement. That said, we do think that this year will mark some kind of soft-form deal," Issa says. "This might be worth a figure (maybe two), but that would be a pop we would be inclined to sell. For now, the 1.3312 level is key resistance; a move above that on a Brexit deal would have us waiting in the wings to sell towards 1.34/1.35." 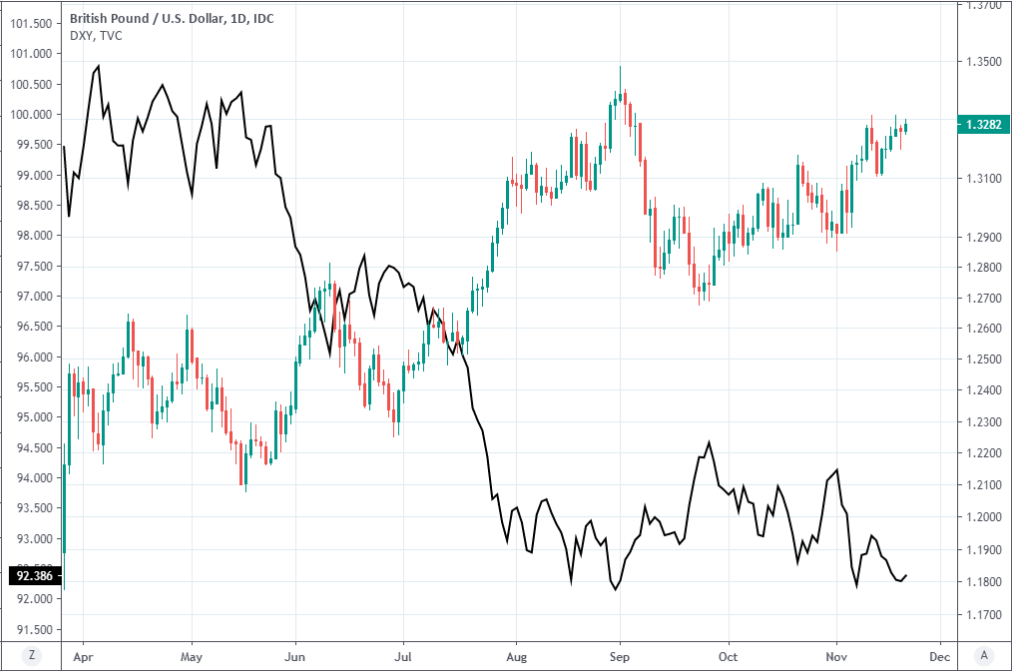 The U.S. growth outlook took another knock Friday, imperilling risk currencies like the Euro, Pound and oil-linked Norwegian Krona after Treasury Secretary Steve Mnuchin stood firm behind an instruction to the Fed that it wind down some crisis support programmes and return to Capitol Hill the monies still held in the relevant wallets. He argues that companies have more need for government grants than bank loans, so has instructed the return of $455bn of funds so they can be reappropriated by lawmakers.

Mnuchin says the law set out by the CARES Act was clear and that the decision isn't political, although the latter will certainly have consequences for the likely-incoming administration of Joe Biden, who's expected to struggle getting spending packages onto the statute book without a congressional majority following the contested defeat of Donald Trump in the November 03 election.

"The combination of rising Covid-19 infections and lack of additional fiscal stimulus after the CARES Act may now be finding its way into the economic data. This should underline the urgency of a new fiscal stimulus package. Unfortunately, Congress goes on vacation next week. Probably tired from doing nothing the past six months, at least when measured in terms of providing additional fiscal stimulus," says Philip Marey, a senior U.S. strategist at Rabobank. "Republicans had earlier indicated they were worried that the Municipal Lending Facility and the Main Street Lending Program could be used by the Democrats to bypass Congress if Republicans were to block additional federal government support to local governments and small and midsized businesses. So Mnuchin’s action is clearly related to politics."

In the event that Republican senators held up a financial package due to disagreement with its provisions, having half a trillion Dollars on account at the Fed already would have been useful to a then-Democratic Party administration. But Mnuchin now suggests the Fed request any such funds from an exchange settlement account that had just $93bn of assets in 2019, or ask a divided congress for "funds appropriated by Congress."

The move could portend bitter political battles in Washington during the months ahead and lesser fiscal support for the U.S. economy than markets expect, with knock-on implications for other economies and currencies. That would be supportive of the Dollar and a headwind for currencies like the Euro and Pound. The Fed was widely reported Friday to have objected to Mnuchin's decision, although it didn't publish any statement to its website