The Euro-to-Dollar rate edged lower on Friday as uncertainty about the outlook for Europe's celebrated coronavirus recovery fund and next multi-annual budget remained in doubt, leading the single currency to lag over rivals, although analysts say the drama in Brussels matters little to an otherwise bullish outlook.

Europe's single currency was treading water against the Dollar and under pressure from a majority of its other rivals even as stock markets advanced amid an upbeat investor mood, which was resilient to a creeping encroachment of new coronavirus restrictions on city and state economies in the U.S.

Sentiment has been lifted and resilience of risk assets enhanced by progress in the race for a coronavirus vaccine, with Pfizer and BioNTech saying on Friday they would be applying before the weekend for emergency use authorization from the Food and Drug Administration (FDA) for their developmental product.

The application sets the ball rolling on a multi-week approval process which the two hope will culminate in a staggered rollout as early as the New Year. But while U.S. stocks remained supported amid these statements, and after having set new 2020 highs earlier in the week, the Euro has been unable to get above even last week's highs against the Dollar and as well as other rivals.

"EUR/USD for the past three months has been in a range. It is viewed as a bullish consolidation range, but we have yet to see the trigger of a break higher," says Karen Jones, head of technical analysis for currencies, commodities and bonds at Commerzbank. "It is consolidating below its current November high at 1.1920 and the 78.6% retracement at 1.1926, and is easing back slightly but it will remain bid in its range while above the 6 month support line at 1.1682."

Underperformance is conspicuous for its advent amid fresh discord among national leaders of EU members that is fomenting uncertainty about the bloc's coronavirus recovery fund and next budget. Doubts have risen about whether Brussels will able to continue funding its operations from January due to an East-Vs-West divide over terms and conditions attached to  fund as well as future payments coming from the EU's ordinary budget. 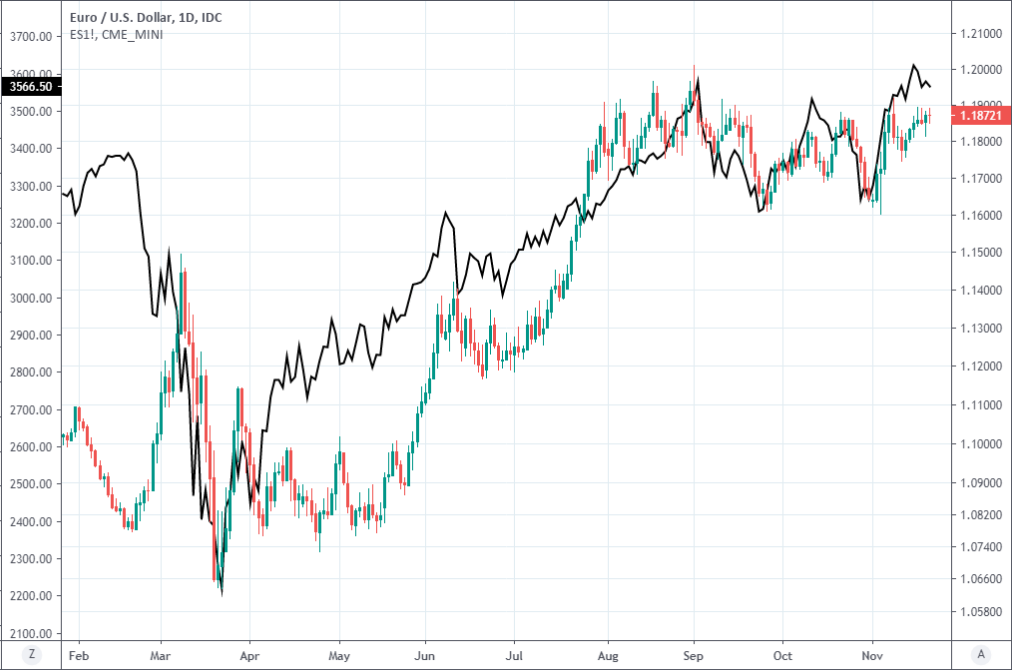 Chancellor Angela Merkel said Wednesday that Poland and Hungary had vetoed the EU budget as well as its €1.8 trillion (£1.6 trillion) provision for supporting the continental economy as it recovers from the effect of coronavirus containment measures out of objection to terms inside of it relating to enforcement of the EU's rules on the "rule of law".

"We need to stay united on this. This financial package is essential for our economic recovery. We need to implement it as soon as possible," European Council President Charles Michel said Friday. "The vast majority of Members States agree with the compromise on the table. Some Member States have indicated that they are not able to support the majority. We will continue the discussions to find an acceptable solution to all."

EU leaders including those of Poland and Hungary agreed in July to hand Brussels the authority to withhold EU budget funds from member states who're judged not to be in compliance with the bloc's rules. The Next Generation EU funding plan was hastily agreed after months of acrimony between national leaders prevented Brussels from making a meaningful financial contribution to efforts aimed at guiding economies through the crisis.

"The prospect of a fierce political battle over the EU's Recovery Fund is now a reality," says Claus Vistesen, chief Eurozone economist at Pantheon Macroeconomics. "For the EU's part, the decision to drive through the rule-of-law provisions unchanged via a qualified majority, and the subsequent pledge not to budge, has left Germany with little room to allow concessions in the new proposal. On the other side of the table, it makes no rational sense for any of the dissenting countries to walk the plank, but Hungary's Viktor Orban is completely unpredictable, and all evidence suggests that he is digging in. We now think that Hungary and Poland will continue to block the budget in coming weeks, setting up a tense December in Brussels, with both the Recovery Fund and Brexit hanging in the balance."

Earlier bickering over perceived conflicts of interest between members had cast the bloc in a disunified light and prompted questions about its future, but as leaders appeared to agree a big ticket package that gave the impression of unity, some analysts, economists and pundits warned that difficult discussions and related negotiating successes had been kicked down the road.

Hungarian and Polish concerns about how 'rule of law' rules were the crux of one such discussion and are a negotiating successes that is yet to be achieved. Pantheon's Vistesen says he's confident the budgets "will be pushed through" but that this  will come at the expense of an ugly political row.

"While the news related to the bloc's budget gridlock may have prevented the pair from drifting above 1.19 this week, the political difficulties related to the ratification of the MFF are unlikely to shift the near-term balance in EURUSD dramatically because the MFF and the Recovery Fund were not significantly adding to 2021 growth expectations in the first instance," says Stephen Gallo, European head of FX strategy at BMO Capital Markets.

BMO Capital Markets reiterated on Friday that implications of the spat are mostly political, with the knock-on effect for the economy and Euro negligible given the thin spread of money across many countries and a number of years meant that it was never likely to add much to GDP in the first place. 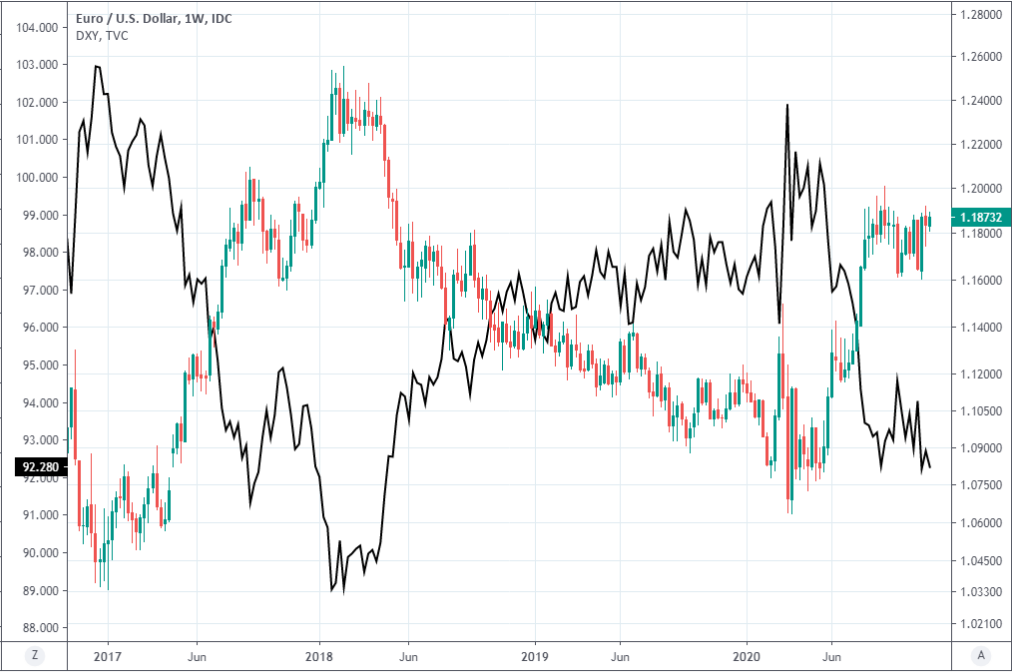 "Drivers are predominantly related to the USD and risk appetite," Gallo says. "The disbursement of grants & loans (from the middle of 2021) to fund multi-year investment projects is not really something that can move the growth needle in a big enough way to cause sizable shifts in FX or bond markets."

Economists at Berenberg and EU officials themselves said this week there are various levers Brussels can pull on in order to keep money flowing to its own programmes and operations as well as member states once the current seven-year budget period ends on December 31. The resulting expenditures would be made under the current budget framework and prevent a U.S.-style government shutdown cutting off funding and adding to the black hole in GDP that economies will carry into the New Year.

Gallo and others sees the outlook for the Euro as hinged on investor appetite for the Dollar and risk assets like stocks rather than developments in Brussels. These factors are all heavily influenced by coronavirus momentum and resulting containment measures in major economies, with the greenback usually a beneficiary of adverse news.

Some U.S. cities and states began tightening restrictions on activity and daily life again this week, prompting concerns in some parts about the prospect of renewed 'lockdown' measures that become widespread like those that took all of Europe's major economies offline to at least some extent in November.

"We are cautious EUR and satellite currencies over the near-term due to lockdowns and ahead of potential ECB easing next month. We therefore prefer expressing progrowth views through CAD and AUD rather than the Scandies for now," says Zach Pandl, global co-head of FX strategy at Goldman Sachs in a research note covering the year-ahead outlook. "After a lengthy period of US economic and asset market outperformance, the Dollar appears meaningfully overvalued—about 10% on standard metrics—and many investors are overweight US assets. The Fed has also cut rates to zero, and its new policy framework should result in a long period of deeply-negative short-term real rates. The combination of high valuations and negative real rates skews the Dollar outlook to the downside, in our view."

BMO forecasts the Euro will remain around Friday's 1.18 level over the next month as the single currency navigates December's European Central Bank (ECB) meeting and current virus-related restrictions, but tips the exchange rate to reach 1.20 early in 2021 ahead of an advance up to 1.24 by year-end.

On the other hand, the Goldman team forecast a EUR/USD rate of 1.17 three-months, but see the single currency rising to 1.25 by the end of next year.