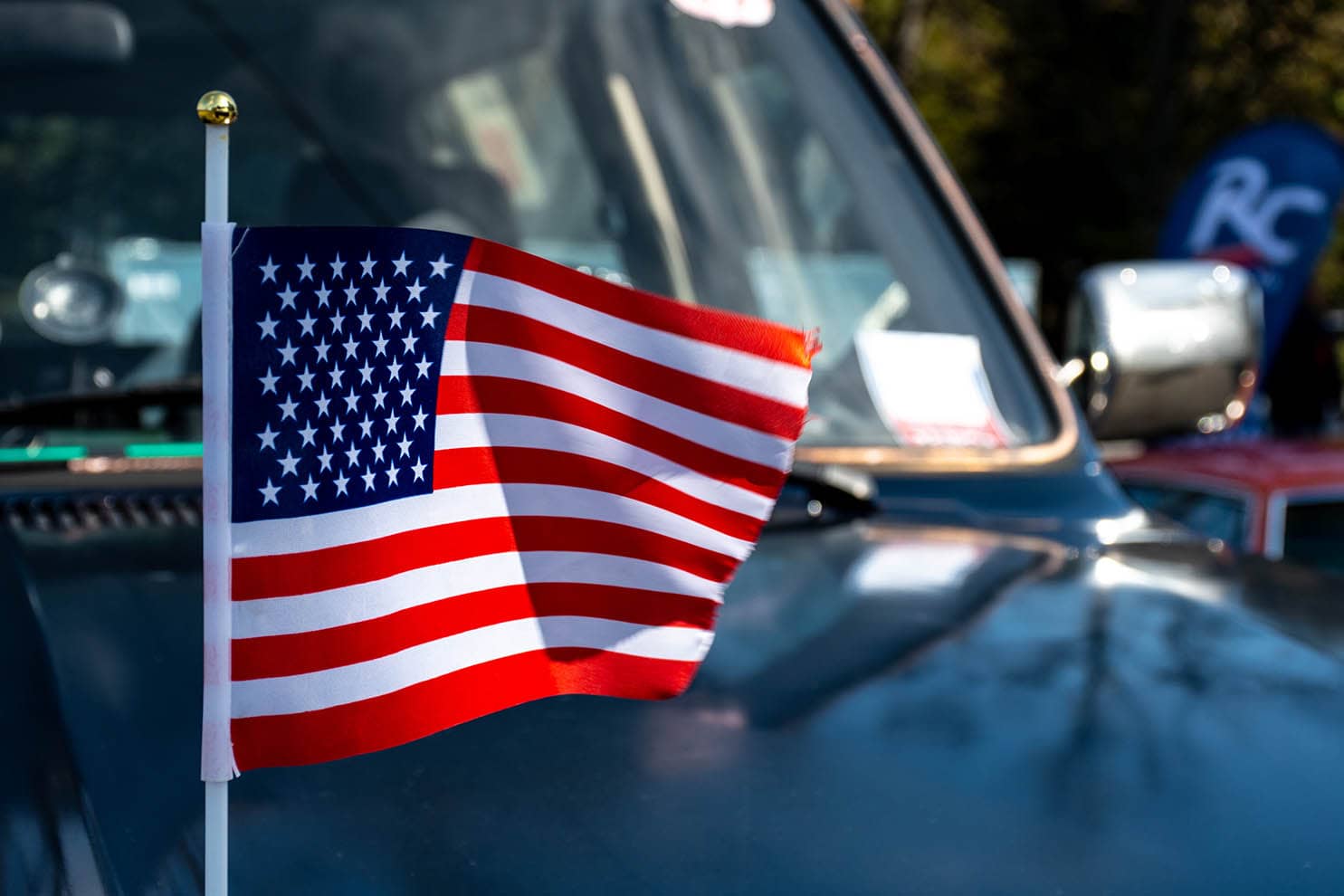 A tranche of polls have been released over the past 48 hours that have confirmed a stable lead for Joe Biden with just days go before polling stations across the United States open.

The development will ensure a 'blue wave' theme remains alive in currency markets, which is on balance a negative input into Dollar valuations according to numerous foreign exchange analysts and economists.

"The floodgates have opened, with a mix of high-quality polls, low-quality polls and pretty much everything in between," says Nate Silver, Founder and editor in chief of FiveThirtyEight. "Although there are some outliers in both directions, they tell a fairly consistent story, overall: A steady race nationally, perhaps with some gains for Joe Biden in the Midwest."

FiveThirtyEight's election modelling now shows Biden has an 88% chance of winning the vote. 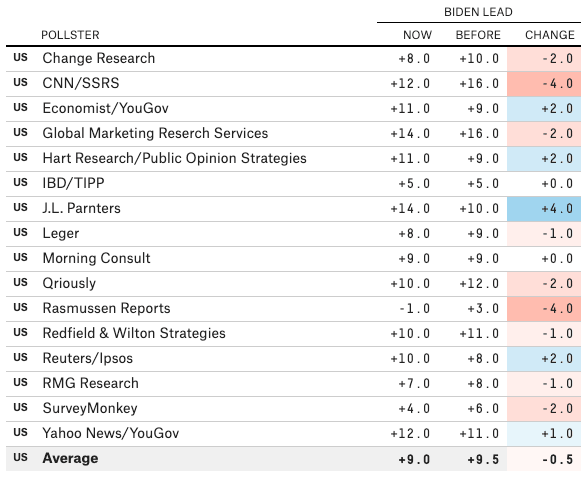 Above: Nationwide polls released over the past 48 hours. Image courtesy of FiveThirtyEight.

The markets will however also be keeping an eye on those Senate seats up for election, with polling suggesting the Democrats are on track to take control away from the Republicans, which would in turn lead to a complete capture of the White House and Congress and pave the way for the release of a generous fiscal support package early in 2021.

"A 'perfect blue wave' would certainly have implications for the currency markets. After all, from a market perspective, this constellation would probably result in a much more expansionary fiscal policy, since the Democrats would have to reckon with far less resistance from the notorious 'fiscal hawks' from the ranks of the Republicans - as is currently the case in the dispute over a second Corona fiscal package," says Thu Lan Nguyen, FX & EM Analyst at Commerzbank.

FiveThirtyEight's Senate prediction - which takes account of regional Senate race polling and adjustments - shows the Democrats stand a 75% chance of taking the Senate. 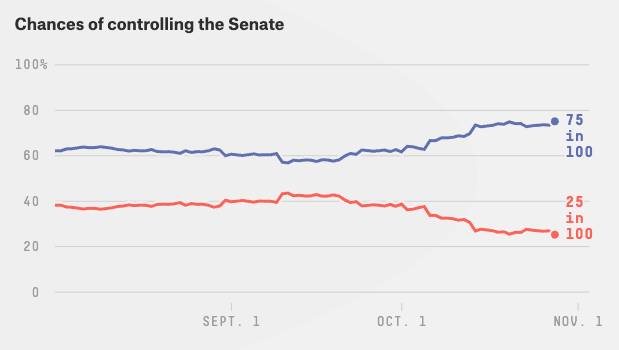 Above: Modelling conducted by FiveThirtyEight shows a 75% chance Democrats take the Senate.

"For the U.S. dollar this would be bad news, as we have seen in recent weeks. The U.S. currency weakened significantly when there were signs of an imminent agreement in the U.S. Congress on a further comprehensive fiscal package," says Nguyen.

But the Dollar is currently facing conflicting forces; on the one hand a slump in global markets owing to rising covid-19 lockdowns in Europe is proving supportive while on the other expectations for a strong Biden showing in early November are limiting strength.

However the relative stasis in the Dollar could have more to do than the short-term drivers, according to analysts.

Commerzbank have told clients in a recently released research publication that the Dollar has not yet shown any material reaction to growing expectations for a Biden or 'blue wave' outcome in early November. "US dollar spot rates have so far shown little sign of US election fever," says Nguyen.

One potential reason for an apparent failure by the market to front-run what is looking to be a clear-cut outcome could lie with a reluctance to buy into what the polls are saying.

"Confidence in the polls seems to have been shaken since the last election. It is often pointed out that Hillary Clinton also led in the polls, among others in the above mentioned swing states, and then surprisingly lost. Fair enough. However, the polling institutes surely have learned from their mistakes at the time and have now developed more sophisticated methodologies. Could they still be wrong? Sure, but the probability is likely to be lower than four years ago," says Nguyen.

A look at implied currency volatilities around the vote, and particularly after the vote, do however shows investors are geared for volatility. In short, the market is likely to come alive when the actual result starts to become visible.

"The market apparently prefers to hedge rather than bet on the outcome of the election," says Nguyen.

Market participants will remain cautious on the outcome given a persistent refusal to fully believe polls, and even those who are inclined to watch polls will have noted that 'poll of polls' collations do show Trump's performance to have improved of late.

RealClearPolitics conduct one such 'poll of polls' and a tightening is evident: 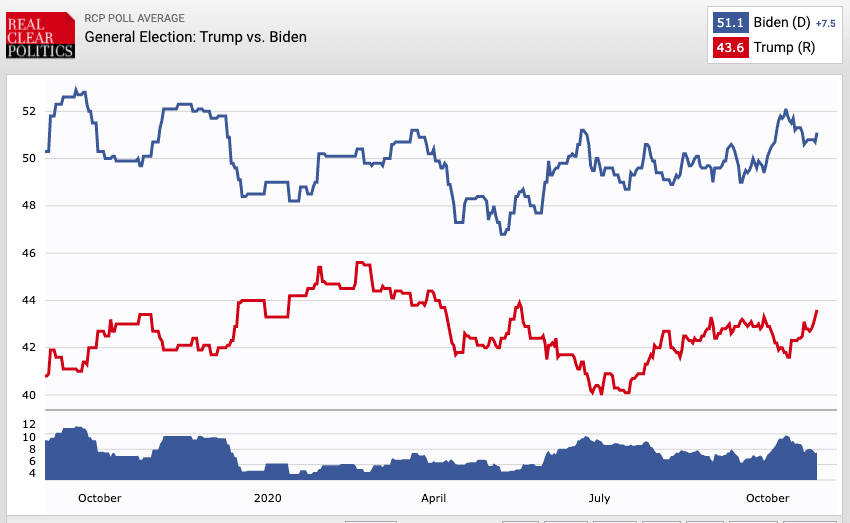 Is the tightening enough to mean a margin of error becomes relevant? This question is all that is needed to keep markets on edge.

"Former Vice President Biden has a strong chance of winning, but his victory is not guaranteed," says Carol Kong, Associate International Economics and Currency Strategist at CBA. "Exit polls and early votes could show opposing signals which can lead to heightened volatility."

CBA strategists say one scenario that could lead to market volatility is a scenario whereby exit polls are skewed towards a Trump victory, because they judge more republicans will vote in person.

In contrast, early results from states that start counting mail‑in votes ahead of election day, could favour a Biden win.

The Dollar is tipped to benefit in the event of a tight vote leading to confusion and potential legal wrangling.

"A contested election should result in a risk-off reaction due to the potential for binary outcomes and heightened uncertainty. It also makes a fiscal deal in the lame duck session more difficult to achieve since it narrows the window between Election Day and when the new Congress is sworn in (early-January)," says Ned Rumpeltin, European Head of FX Strategy at TD Securities. 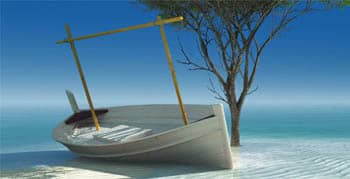 Biden nevertheless holds a comfortable lead in the three states that took President Trump to the White House in 2016 and there is as yet no evidence of a late polling shift in the president's direction, as was the case in 2016 when favourite Hillary Clinton unexpectedly lost.

"At the 2016 Election, Trump won with a margin of 77 electoral votes to Hillary Clinton. Forty-six of the electoral votes (Michigan, Pennsylvania and Wisconsin) were won with a margin of less than 0.7pp, with Clinton leading the states polls comfortably going in to Election Day by at least 5pp in all three states," says Senior Analyst at Danske Bank, Mikael Olai Milhøj.

Four years ago, polls may have given Clinton the edge on Trump in all three states, however by this point in the race Clinton's lead was narrowing and not nearly as steady as Biden's currently is, according to political pundits.

If Biden holds on to the states Clinton won in 2016, and flips Michigan, Pennsylvania, and Wisconsin, he will win the election.