The release of U.S. non-farm payroll data is the highlight of the day with foreign exchange markets likely to pay particular attention to this month's reading to get a steer as to what degree the economic recovery faltered in July, or whether it found a fresh wind.

Non-farm Payrolls for July are forecast to read at 1,580K, down on the previous month's 4,800K which takes the unemployment rate to an expected 10.5%.

Average Hourly Earnings (YoY) for July are forecast to read at 4.2%, down on the previous month's 5.0%.

"If we see stronger than expected jobs growth and wage figures, the greenback may be poised for a recovery against the British Pound in particular; traders could play this theme through potential short setups in GBP/USD," says Matt Weller, Global Head of Market Research at GAIN Capital.

But if the data underwhelms against consensus expectations Weller eyes a sell opportunity in USD/JPY, "which is not nearly as stretched as many of the other major currency pairs."

Recent data has been mixed, meaning there is no degree of confidence amongst the analyst and investor community as to which way a surprising non-farm payroll release will swing. 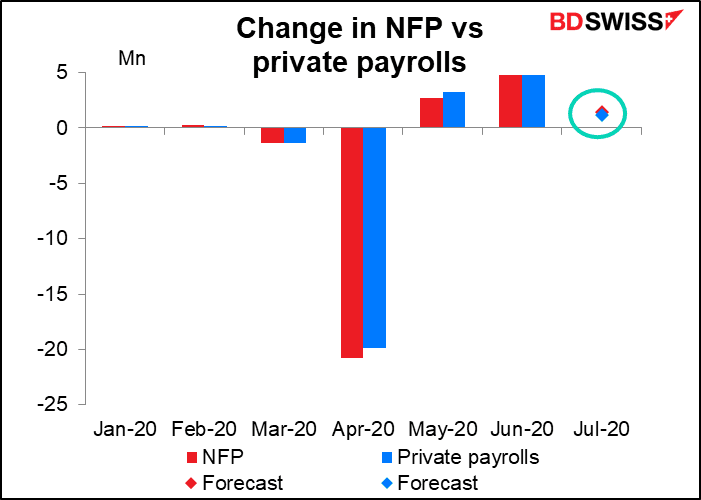 Thursday saw the U.S. Department of Labor report that the number of Americans filing for unemployment benefits rose by its smallest amount since onset of the coronacrisis in March. U.S. Initial Jobless Claims rose 1,186K in the week ending August 01, down 249K from the previous week's revised level of 1,435K. The market was looking for a reading of 1.400K, ensuring this was a comfortable beat on expectations.

The Dollar approaches the release of unemployment data looking rather perky on Friday morning; it is the second-best performing major currency and is only recording a loss against the Yen as global stock markets trade in the red, suggesting there is a 'risk off' sentiment amongst investors.

However, stepping back and looking at the currency's performance over the course of the past week and month it is hands-down the worst performing major confirming a trend of depreciation remains in place.

"The bar to upend the overarching USD weaker bias is high. Unless jobs surprise into the negative and sink risk assets - albeit temporarily - a USD bid is likely to be met with prompt selling interest," says strategist Mazen Issa at TD Securities.

Observations made by Marshall Gittler, Head of Investment Research at BDSwiss Group shows that the market impact of a negative surprise tends to have longer-lasting impacts on the foreign exchange market than is the case when the data surprises to the upside. On average, the dollar has fallen over the next few days regardless of whether it was a positive surprise or a negative surprise.

The big market moves could therefore well rest on a disappointing number.

Economists at Goldman Sachs are expecting the data to disappoint, with a reading of 1.0 million in July after 4.8 million in June expected (remember consensus is for 1.5 milllion).

"Our forecast reflects an outright decline in employment in the Sunbelt that is more than offset by net gains in the rest of the country. We also believe education seasonality could boost July payroll growth by as much as 500-750k, as many end-of-school-year layoffs took place in April rather than in June/July," says Spencer Hill, Senior Economist at Goldman Sachs.

Goldman Sachs meanwhile estimate the country's unemployment rate to have reached 10.7% in July.