- USD pares loss on profit taking ahead of Independence Day.
- 4.8 mn payrolls gain a record, but road to recovery still long.
- Markets upbeat as investors hope for a coronavirus vaccine. 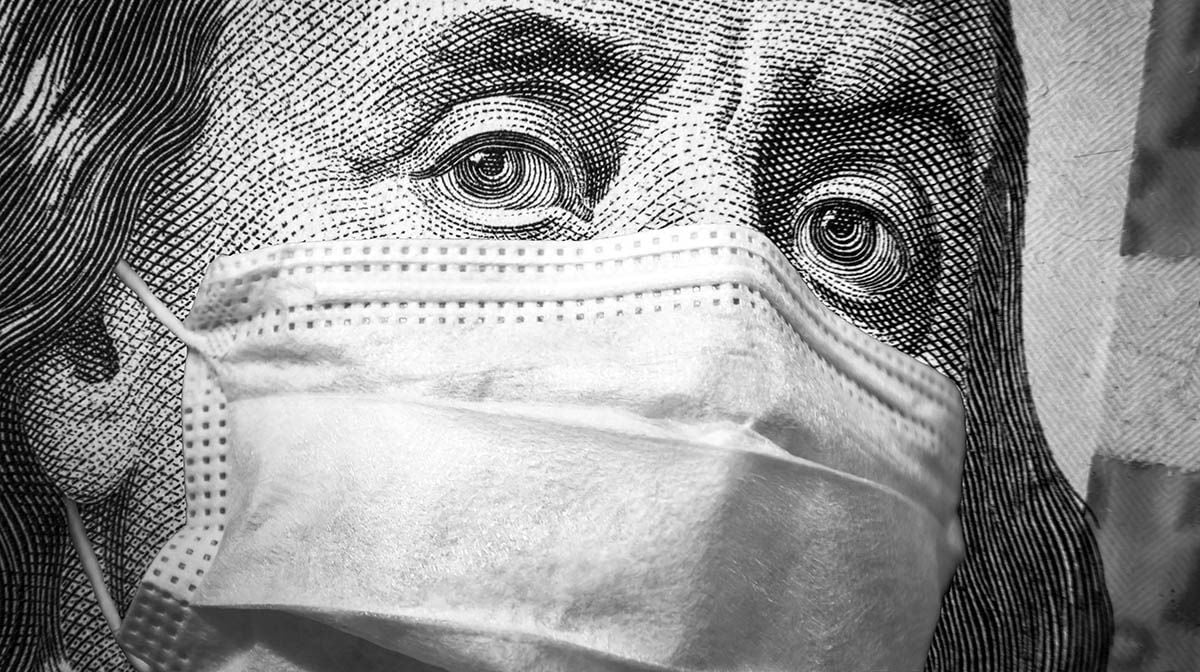 Dollar losses eased Thursday after the non-farm payrolls report surpassed expectations, with job gains stoking upbeat sentiment in a buoyant market for risk assets but putting a break on the Pound, Euro and other currencies.

The U.S. economy created 4.8 million new jobs in June, the Bureau of Labor Statistics said, building further on an upwardly revised 2.69 million gain from May while surpassing the consensus for an add of around 3.03 million.

Job creation weighed heavier on the official unemployment rate, which fell from 13.3% to 11.1% in June, although it remains a long way above the 3.5% that prevailed before the coronavirus came along.

"With the job increases tilted once again towards lower-paying sectors that were hit worse by the job losses of April, average hourly earnings "fell" 1.2% on the month," says Andrew Grantham, an economist at CIBC Capital Markets. "Payrolls have only recouped about a third of the jobs lost."

The strongest increases were seen in leisure and hospitality although there were also noteworthy gains in retail trade, education and health services, other services, manufacturing, and professional and business services.

Many economists say the jobless rate still understates the true level of joblessness in the U.S. due to quirks in how it's calculated, while there were also some 15 million newly unemployed who remained without jobs in June. 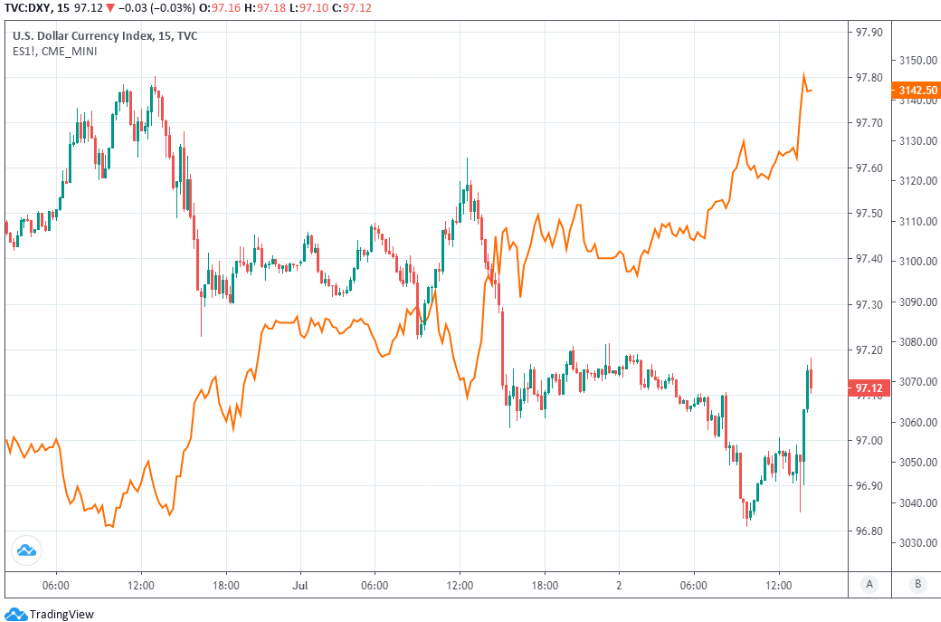 “The positive data will help fuel the optimism currently gripping investors as it provides further evidence of a mild economic recovery, however many participants will still be waiting for further evidence before taking a view,” says Sam Cooper, vice president of market risk solutions at Silicon Valley Bank. "The surprise will spur some additional volatility to an already nervous GBPUSD, however is unlikely to determine long term direction."

Dollar losses eased in moves that were indicative of profit-taking, though risk appetite remained robust into the end of what is a holiday shortened week for Americans given the Independence Day public holiday on Friday.

The greenback remained lower against all majors with the exception of the Yen however, and also continued to carry losses against all barring the Japanese unit for the week too.

"The payroll consensus always looked on the low side, given the drop in continuing claims between the May and June survey weeks and the clear increase in the number of employees working at small firms using the Homebase platform," says Ian Shepherdson, chief economist at Pantheon Macroeconomics. "The bad news is that these data capture the employment picture in the week ended June 13, and things have changed since then, for the worse. The number of employees on the Homebase platform is now falling again, and jobless claims are on the verge of tipping back up." 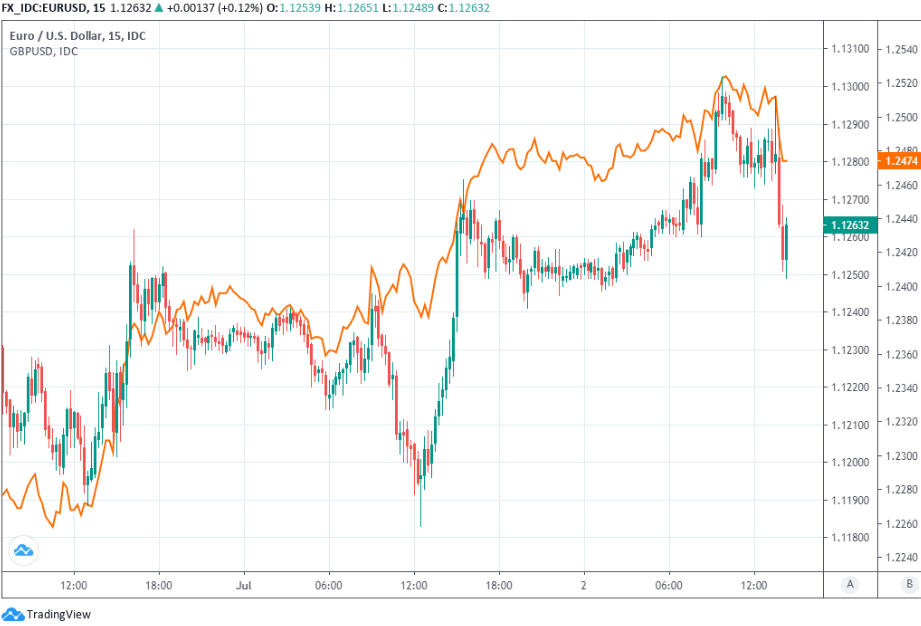 Markets normally care about the jobs data because changes in employment reflect rising and falling demand that either bolsters or dampens the outlook for inflation and interest rates, although investors are most interested currently in who wins the race to return to some semblance of normality.

"Sterling has capitalised on the weaker US Dollar over the past few days, rebounding 2% from a low of $1.2250 this week to $1.25 this morning, whilst taking out the 50-and 100-day simply moving averages. This bullish run may advance further in the short term with a stretch towards $1.26 and even the $1.2690 mark, where the 200-day moving average lies, a possibility if the dollar continues to weaken," says George Vessey, a strategist at Western Union Business Solutions. "The longer-term focus to dominate sterling’s trading direction is whether or not a second wave of infections halts the reopening of economies worldwide and whether a UK-EU trade deal can be achieved. One thing is for certain, there remains a lot of noise and risk of volatility.”

Expectations are often wide of the mark but more so amid the pandemic, which was demonstrated in May when investors looked for 7 million jobs to be lost only to be confronted with a 2.5 million gain.

"About a dozen US states have been forced to halt or reverse lockdowns amidst rising new cases and hospitalizations. The latter coincides with localized outbreaks in China, Australia and South Korea in recent weeks, which may all be under control but serve us a clear warning with regards to the risks of a second wave," says Jan Lambregts, head of research at Rabobank. "The virus reality is at least improving in Western Europe, where a WHO expert declared last week the situation is “under control”. Just in time for Summer holidays, which is the hallmark of any serious crisis in Europe: it needs to be brought under control in June so we can go to the beach in July-August. Globally the virus is anything but under control, however, with the situation in countries as diverse as Brazil, India and Russia remaining dire." 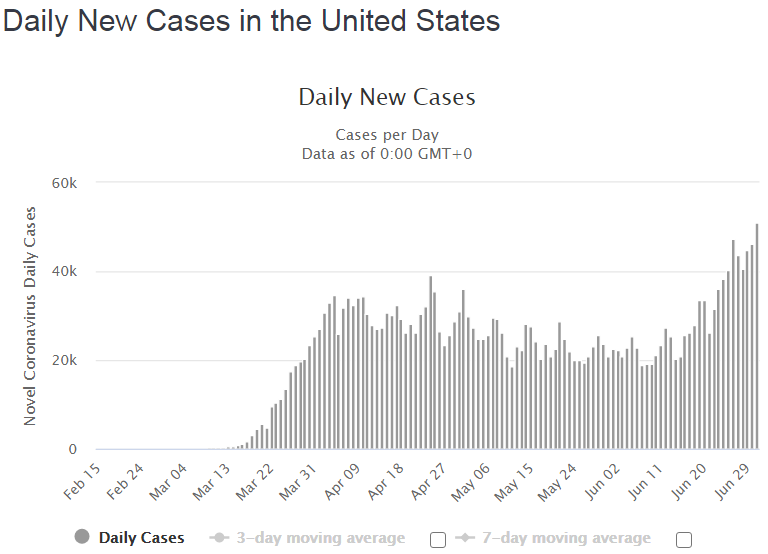 Sentiment was upbeat and risk assets buoyant ahead of and after the data as investors overlooked headwinds to the outlook such as the growing global pandemic as well as mounting tensions between China and others in the world.

Hopes that a vaccine can be ready in time for it to be useful in combating the coronavirus have instead dominated price action, in addition to ongoing signs that a global economic recovery is afoot, even though it's at risk from a very much live-and-kicking coronavirus threat.

Thursday's data reflects the labour market outcome for a month in which a second wave of coronavirus infections swept across southern and western states, one which appears to have continued to swell in early July.

"The trend in the rate of increase appears to have peaked. The growth rate in total cases needs to fall substantially further, though, before the number of new cases per day begins to fall. We still think that's a decent bet for later this month, given the downshift in economic activity in most of the hardest-hit states, visible in restaurant, employment and mobility data," Shepherdson says.

The U.S. reported its largest one-day increase in new infections Wednesday, with a total of 51,097 according to Worldometers, raising the risk of more states retightening restrictions on movement and activity.

Major states including Florida, California and Texas have already rolled back some of their earlier decisions to reopen, although even without any further official restrictions, another wave of pneumonia-inducing infections could hamper consumer and business confidence and threatens to restrain the recovery in the world's largest economy.