- Dollar Index breaks support and sets course for 94.66 ahead of Fed.
- As investors bank on supportive message from Powell & Co at 19:00.
- Some look for hint of shift to yield curve control or negative interest rate.
- USD lower, with AUD and NZD out in front as stock market rally goes on.

The Dollar was crumbling on Wednesday after having broken through a technical support level that broke its fall last week and was on route toward its 2020 lows ahead of the June Federal Reserve (Fed) policy update that will dictate the mood in markets into the weekend.

All major currencies rose against the Dollar on Wednesday, with the Australian and New Zealand commodity Dollars leading the advance while the Canadian Dollar, Pound Sterling and European currencies notched up more modest gains.

"Will the latest Fed guidance or hints at policy preferences down the road continue to feed the speculative energy, or is the meeting an excuse for market participants to deleverage, almost no matter the message the market delivers," asks Steen Jakobsen, chief economist and investment officer at Saxo Bank. "Having run so far, so fast, this market will be highly sensitive to any message from the FOMC meeting today that isn’t at the dovish end of expectations – which are clearly already dovish."

Price action came alongside fresh advances for stock markets and was enough to push the Dollar Index below the 78.6% Fibonacci retracement of its March rally at 96.43, the last obvious impediment to 2020 lows at 94.66.

Dollars were sold ahead of the 19:00 statement, indicating that investors see the bank as likely to keep the party in risk assets alive. That party has seen some stock indices all but wipe the coronavirus off the charts while lifting non-Dollar currencies like the Aussie, Kiwi and even Pound Sterling of late.

"We continue to view the USD decline as being driven by global confidence rather than by the Fed out-QEing the rest of the world. However, we recognize that others in the market view the situation differently, so the #1 issue that the market wants to hear about from the Fed in its communications packet today is how/when/why the Fed will scale back asset purchases. Any sign that the Fed is thinking about these things will factor into the movements in equities and will likely cause the USD to rally. On the other hand, if Powell does his best to keep the mystery alive by promising to remain active to ensure 'normal market functioning' then the USD slide could continue further," says Greg Anderson, CFA, global head of FX strategy at BMO Capital Markets. 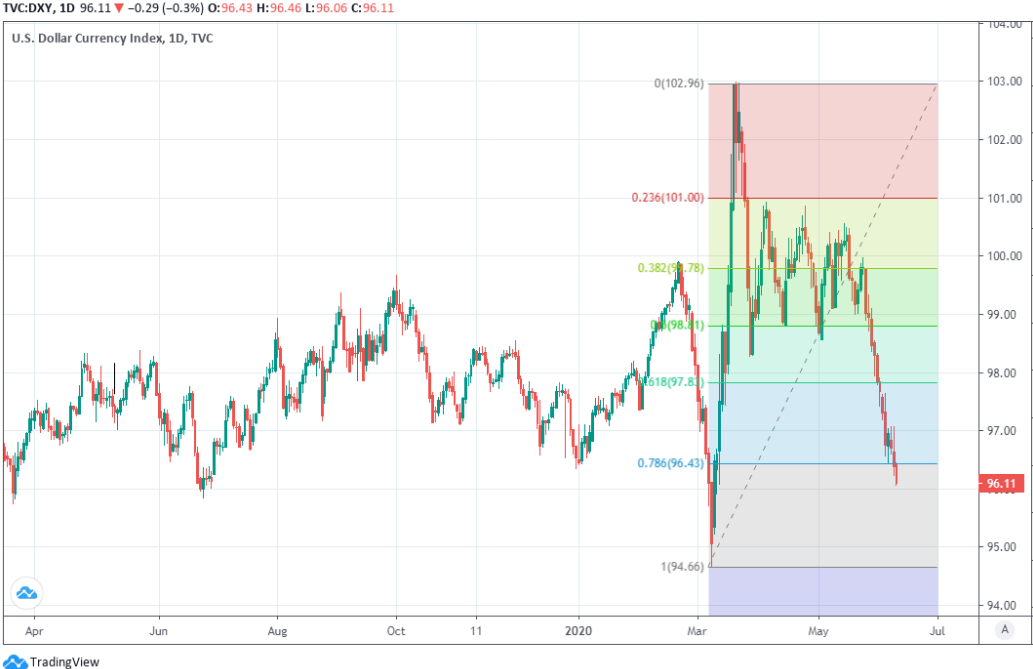 "After a brief correction phase at the start of the week, the broad USD has quickly come back under pressure, with GBPUSD in particular setting new highs for the latest recovery from mid-May," says Robin Wilkin, a cross-asset strategist at Lloyds Bank. "Our underlying view of a move up towards 1.30-1.32 remains. Only a setback through 1.2550-1.2500 would warn of a more significant turnaround and return to the April/May range."

S&P 500 futures were close to pre-coronavirus levels on Wednesday while the NASDAQ had surged to a fresh all-time high in the prior session, which has fueled the rally in so-called risk currencies and lifted the Pound-to-Dollar rate. But the extent of recent gains might mean markets are vulnerable to a Fed disappointment on Wednesday, more so since the May non-farm payrolls report revealed a surprise surge in employment for that month. The decision is out at 19:00 and a press conference will follow at 19:30.

"One expression I really don't expect to hear from Mr Powell today is that the Fed's job is to ‘take away the punch bowl just as the party gets going', as his predecessor William McChesney Martin put it. In the real world (as opposed to equity markets), the party definitely hasn't started," says Kit Juckes, chief FX strategist at Societe Generale. "While we wait, expecting reassurance at least, the dollar remains on the back foot and risk on the front foot. Maybe the best hedge here is to buy EUR/USD volatility, because it really ought to increase as the euro recovers, even if that happens in tandem with (usually volatility-dampening) rallies in equities and credit."

The Fed is expected to unveil its first economic forecasts since the coronavirus closed down the global economy although markets will be more interested in the guidance it gives on the outlook for monetary policy, especially as it relates to bond yields. Yields have fallen to record lows since March and undermined returns offered to investors in a now-underperforming Dollar although they could rise as the economic recovery gets underway so some in the market have floated the possibility of it adopting a so-called yield curve control policy at one of its forthcoming meetings.

"If the market doesn’t get the sense that the Fed is too worried, then the USD should correct from oversold levels. To be clear – we are still strategically bearish on the USD. As mentioned yesterday, we’re expecting a tactical correction given the oversold nature of the greenback, but the bias should still be to fade rallies. We’re still constructive on the EUR and select DM currencies against the USD over the long-term," says Bipan Rai, North American head of FX strategy at CIBC Capital Markets. 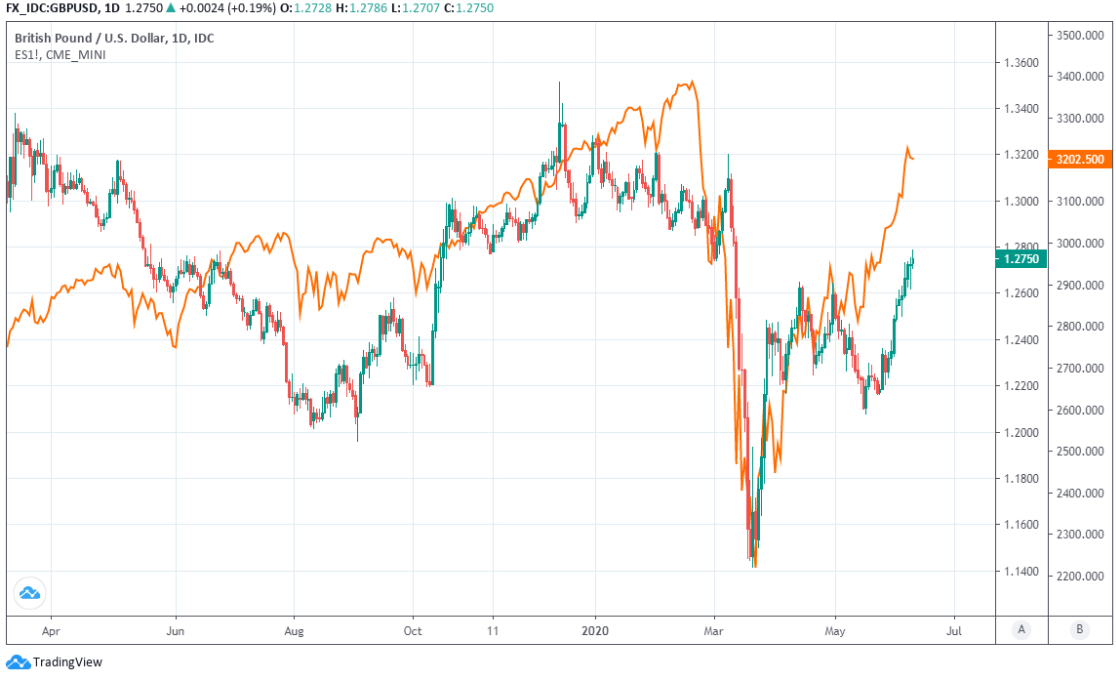 "We expect the Fed to err on the side of caution given the uncertainty about the recovery, with the central bank unlikely rocking the boat for risk assets. While the new set of economic forecasts is published, given the large uncertainty the Fed is likely to refrain from a firm forward guidance," says Petr Krpata, chief EMEA strategist for interest rates and bonds at ING. "The potential indication of the 2022 hike in the new forecast is more likely to do with dispelling the odds of negative rates rather than the potential for a meaningful policy reversal. All this should keep the dollar soft and further help to facilitate the generally widespread USD bear trend."

Investor hopes of a quick global recovery combined with lower bond yields and a huge increase in the supply of Dollars on the market resulting from unprecedented March policy actions by the Fed are a recipe for steep declines in U.S. exchange rates. But the party could be interupted on Wednesday if the bank neglects to sufficiently reassure investors that it will do whatever can be done to ensure a robust bounceback for the U.S. economy.

"Expectations of eventual Yield Curve Control may well be helped by a median DOTS profile showing unchanged rates through the forecast period to end-2022, which will help anchor rates and maintain the current negative momentum for the US dollar," says Derek Halpenny, head of research, global markets EMEA and international securities at MUFG. "A fixed QE program could be an option taken by the Fed this evening as an initial first step in strengthening forward guidance but the BoJ Yield Curve Control policy, implemented in 2016, does indicate Yield Curve Control as a more efficient use of balance sheet."

With the Fed having cut interest rates to zero and launched an unlimited government bond buying programme, it's running out of options for providing this assurance. Some analysts see it turning to a policy of 'yield curve control,' which would see it impose a cap on U.S. bond yields of one maturity or another with significant consequences for the Dollar and other currencies.

MUFG says capping yields at a predetermined level would see investors' 'real returns' falling as the economic recovery gets underway and inflation rises, which would undermine the appeal of the Dollar. Such a policy would also fuel the rally in the stock markets as well as closely-correlated currencies like Pound Sterling and Aussie Dollar, in part because lower yields lift the financial-model-perceived fundamental value of stocks.  However, if the Fed neglects such expectations this Wednesday the Dollar would likely welcome the news and other currencies, not mention risk assets, be blown off course.

"It's all about the Fed and the USD today. The latter has seen some nascent stabilization to start the week but even this appears on shaky footing. The turn lower in risk did not revive the USD to a significant degree either. A retracement sub-1.2100/50 supports in EURJPY could prove key. We think USDJPY is the main driver here. Our bias is tilted for further downside, especially after making a move below the key 108.10/30 pivot. We see greater scope for move lower with 107.10 support being notable. After a long hiatus, we also note early signs that JPY has started to revert to traditional risk dynamics," says Mark McCormick, global head of FX strategy at TD Securities. 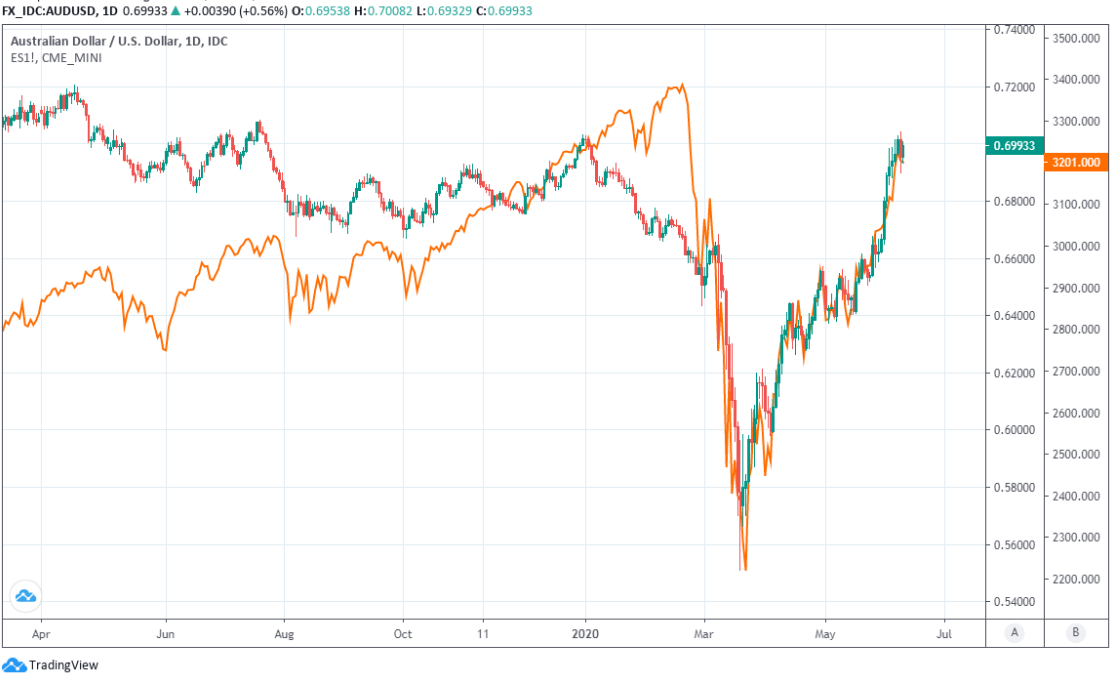