- GBP/USD road-blocked on charts after best week since 2009.

Sterling surged into the weekend amid a broad retreat by the U.S. greenback which, when combined with the scale of earlier losses suffered by the Pound, helped the British currency to outperform most of its major rivals. This lifted the Pound-to-Dollar rate by more than 7% last week, its largest five day gain since May 2009, which has helped Sterling to reverse much of the earlier March decline that had pushed it to its lowest level since 1985.

Gains built despite revelations that Prime Minister Boris Johnson and Health Secretary Matt Hancock have both contracted coronavirus, which wobbled the Pound briefly. Coronavirus has exacted a human toll on the government but the policy response path was already clearly laid out long before then and given that implementation of that response is now well underway, the impact of this on Sterling might be limited to Friday's knee-jerk move lower.

The virus could take the PM out of action for weeks but wouldn't stop the government executing the already-set-out plan to plug the hole that's been torpedoed into the side of the economy by the coronavirus shutdown. The market will keep one eye on the government in case new economic support or restrictions are announced, although technical factors and demand for the greenback could dominate the Pound-to-Dollar rate this week And that might be bad news for Sterling because the charts indicate limited if-any remaining upside, while analysts expect the Dollar to recover its poise over the coming days.

"Crucially it produced a very strong rebound that must be sustained above the 1.20 pivot to expect further recovery in the very near-term. Cable faces a cluster of key levels that may cap gains. The trendline which until very recently provided GBP/USD with support turned into resistance at 1.2665. Even if cleared, sterling may require a very strong bullish catalyst to extend its gains beyond 1.2780/70," says Piotr Matys, a technical strategist at Rabobank. 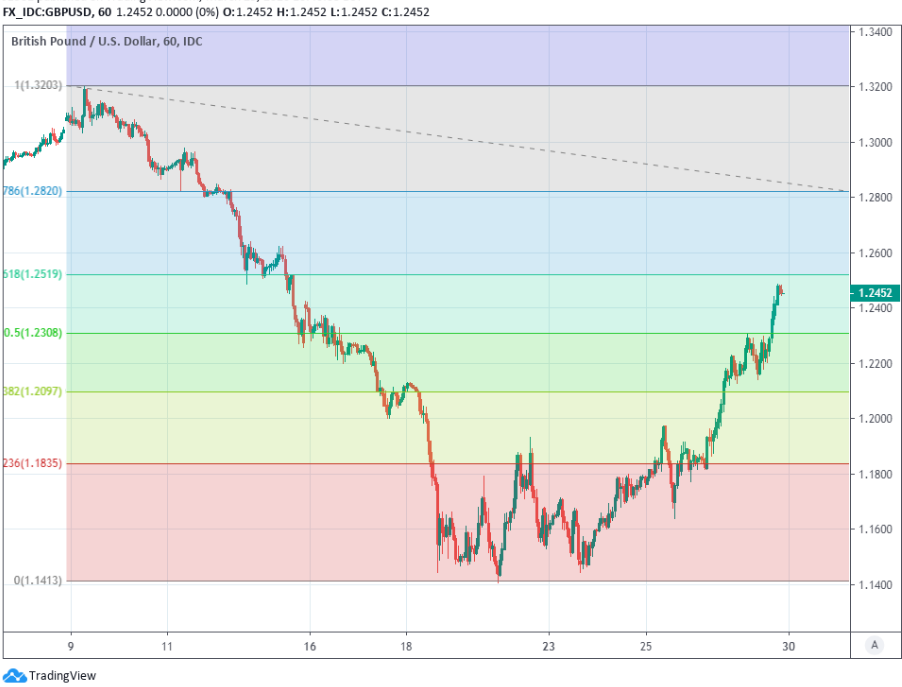 Above: Pound-to-Dollar rate at hourly intervals, stalls on Friday ahead of 61.8% Fibonacci retracement of 2020 down-move.

The Pound-to-Dollar rate closed Friday just below the 61.8% Fibonacci retracement of the December 2019 downtrend located around 1.2466, which might block the Pound's path higher from Monday in the absence of further meaningful weakness in the greenback.

Rabobank's Matys says the Pound will meet tough resistance between 1.2665 and 1.2780 and that it needs to hold above the 1.20 level this week to avoid a return back toward the 1985 lows set during the week ending March 20. Meanwhile, Jones is betting the Pound falls to a fresh 1985 low of 1.0463 within three weeks, where it's expected to remain for months to come.

The Pound has been on a roller coaster ride through a March month that's been marred by extreme volatility in all financial markets as one-by-one, meaningful components of the global economy ground to a standstill as the coronavirus spread increasingly outside China and then Asia.

Recent price action has been driven largely by demand for the Dollar, which surged more than 7% this month as stock, commodity and bond markets went into meltdown and investors rotated into cash. 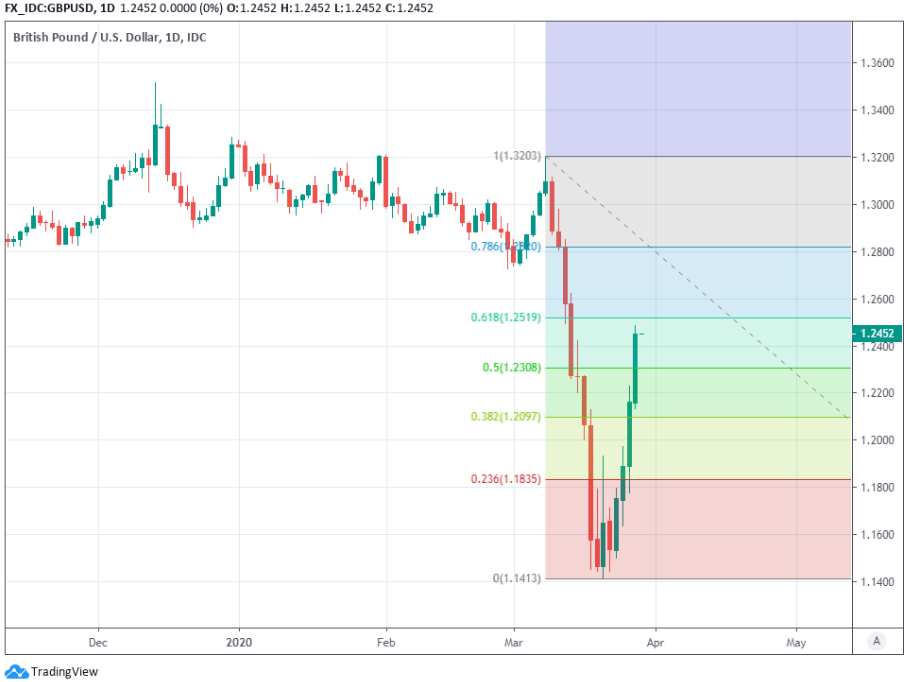 Above: Pound-to-Dollar rate shown at daily intervals, stalls on Friday at 61.8% Fibonacci retracement of 2020 down-move.

"The Dollar pulled back this week as risk assets rebounded, but our best guess is that the historic rally is not quite over. In a further equity market drawdown the real trade-weighted Dollar has perhaps 3-5% upside from the latest highs," says Zach Pandl, global co-head of foreign exchange at Goldman Sachs.

Stock markets saw historic falls this month and bond yields whip-sawed amid near unprecedented interventions from central banks that have struggled to keep a lid on yields, which rose sharply as investors dumped typically safe-haven government debt. Herd-like movements into cash would always benefit the world's reserve currency at the expense of others.

Dollar demand and the factors compelling it have dominated price action in most exchange rates of late although that demand all-but evaporated last week following an earlier decision by the Fed to extend Dollar swap lines to more central banks. Many analysts cite that and other actions taken by the bank as significant in reigning in the greenback, although increasing momentum in the U.S. coronavirus outbreak is also said to have played a role too last week.

Sensitivity to changes in risk appetite and a vulnerability to a strong Dollar mean the market mood will be an important factor for Sterling this week.

"Without medical breakthroughs of some kind, the next few weeks could be challenging for markets as we price in a deep global recession. We recommend that FX investors continue to lean cautious, with longs in traditional safe havens (USD, JPY, CHF) and a focus on relative value," Pandl says. 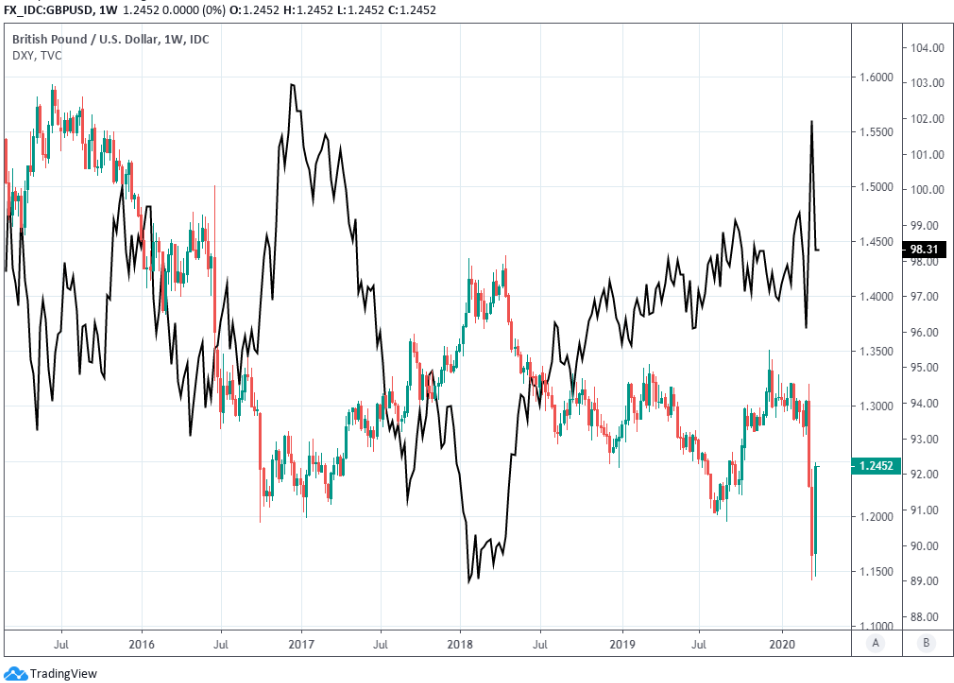 Risk appetite is likely to be driven by changes in the pace at which the coronavirus spreads throughout the major hotspots in the world, notably the U.S. and Europe including the UK, with investors also likely on the lookout for any hints about how long 'lockdowns' will keep economies on life support for.

The U.S. pulled ahead of Italy and China on Friday, claiming the mantle of the largest coronavirus outbreak after confirmed infections crossed the 100k threshold before rising to 122k on Saturday. Both the U.S. and UK saw their largest single day increases in infections and deaths Friday while Saturday's disclosures brought only a slightly lesser pace of increase. Meanwhile, new cases recorded each day in Italy, the epicentre of the European outbreak, appeared to slow last week. Likewise in Spain.

"The DXY first surged by 8.4% and from the high on 20th March has weakened back by 3.3%. One key message today that we have is that we should not be complacent in believing the policy measures taken to date will result in a further retracement of USD strength. Uncertainty simply remains too high," says Derek Halpenny, head of research, global markets EMEA and international securities at MUFG. "Next week we believe will be more about assessing timelines of economic lockdowns through the prism of COVID and investor sentiment is likely to remain fragile with bursts of risk-off as investors assess the lockdown timescales and economic impact."

The world's major economies and increasingly, many of its developing ones have been brought to a standstill by governmental efforts to slow the spread of the coronavirus that had infected more than 600k people across the globe as of Saturday and which had claimed the lives of more than 30k people. Economic stoppages have already been extended at least once in Italy, Spain and France while the UK looks set to follow suit in late April.

And for each incremental stoppage of economies, the fiscal support required by government grows larger and so too does the eventual cost for the public purse and currencies like the Pound. The UK has the largest current account deficit in the developed world which means Sterling relies for part of its value on continuous inflows of foreign capital that can dry up in times of strife, and which leave the currency especially vulnerable to bouts of financial instability like those seen earlier in March.

"Measures taken on both the fiscal and monetary front and signs of reducing USD funding squeeze suggest that global FX markets may be about to exit the period of profound, indiscriminate moves, where the USD appreciates abruptly. This should be particularly helpful for NOK and GBP, which have been vulnerable during periods of the USD funding squeeze," says Petr Krpata, chief EMEA strategist for currencies and bonds at ING.