-QE and USD swap lines could keep a lid on USD going forward.

-While divergence in epidemic curves risks all out USD downturn.

The Dollar weakened amid a recovery of risk appetite Tuesday although it could now be facing an outright downturn because the Federal Reserve (Fed) is blocking its path higher and the U.S. epidemic curve is steepening.

Investors sold Dollars and bought other currencies after China said it would lift a 'lockdown' of the Hubei province and as some European countries reported a second consecutive decline in new coronavirus cases despite increased testing, offering markets hope that the deadly viral pneumonia is being brought under control in some of the most affected areas.

The brighter mood music follows unprecedented actions from the Fed that have stopped the runaway Dollar in its tracks after nearly a fortnight of gains that were so quick and large in the making they were posing as an additional headwind to the U.S. and global economies. The Fed is effectively blocking the Dollar's path higher and attempting to backstop the economy while politicians squabble in congress about size and shape of an aid package supposed to help companies and households whose businesses and incomes are being disrupted by public and private efforts to contain the coronavirus.

"The US Federal Reserve unleashed its most consequential torrent of liquidity provision yesterday with a raft of measures aimed at backstopping the US financial system. The market has done a double take as we are still awaiting for a US Congress to approve a rescue package, but sentiment has improved this morning and sent the USD lower," says John Hardy, head of FX strategy at Saxo Bank. "If the market has finally got the sense that the contagion across financial markets is contained here, even with significant real economic damage to come, the USD could be in for a tactical drubbing." 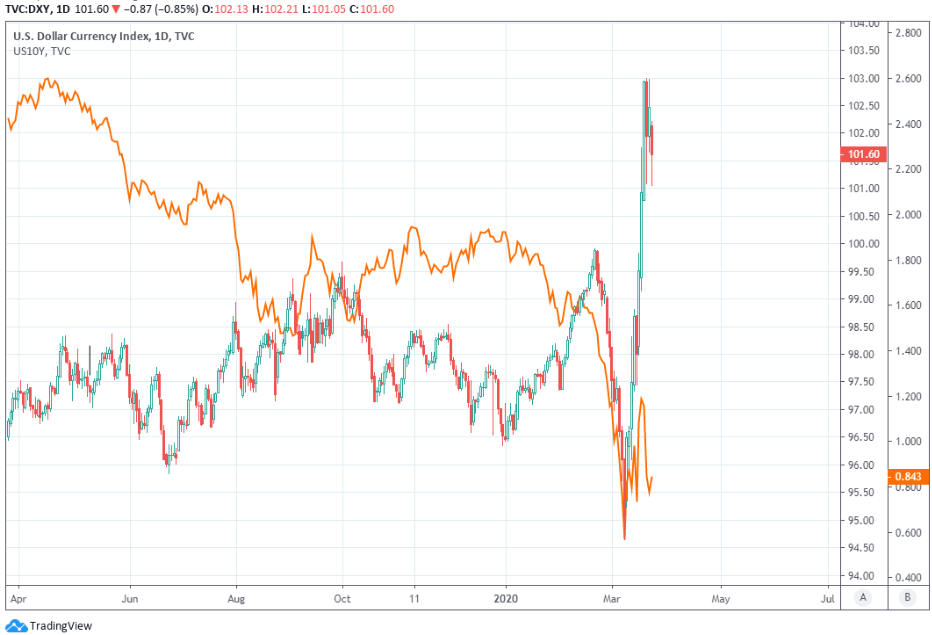 The U.S. central bank said Monday it will buy an unlimited supply of U.S. government bonds in an effort to support the economy by forcing down yields and in the process, borrowing costs for everybody. It's also going to buy corporate bonds for the first time and has made significant sums of new money available for lending to creditworthy households and businesses, although it's the unlimited quantitative easing that matters most for the Dollar

An unlimited quantitative easing program will crush government bond yields, reducing the attractiveness of the U.S. currency to investors, while radically increasing the supply of it available on the market. And that increased supply could be augmented in the weeks ahead by the Fed's Thursday decision to extend Dollar swap lines to the nine more central banks, furnishing them with up to $60bn they can loan to companies or sell on the open market in order to support their domestic currencies.

"Markets are sending a clear message that unlimited QE is negative for the USD overnight. This comes as signals of funding stress in the cross currency spreads eases as well," says Bipan Rai, North American head of FX strategy at CIBC Capital Markets. "Given the extraordinary supply of USD now available, the greenback should come under MORE selling pressure. The strongest play right now is to be long Gold (already up close to 10% over the past three sessions)."

The Fed is crushing bond yields and the Dollar is falling at the same time as the U.S. epidemic curve steepens, with the number of confirmed infections rising to nearly 50k amid increased testing on Monday, according to Johns Hopkins University figures. The Centre for Disease Control and Prevention said it was aware of just 33,404 cases and 400 deaths on Monday, although its figures appear to lag those of Johns Hopkins University. 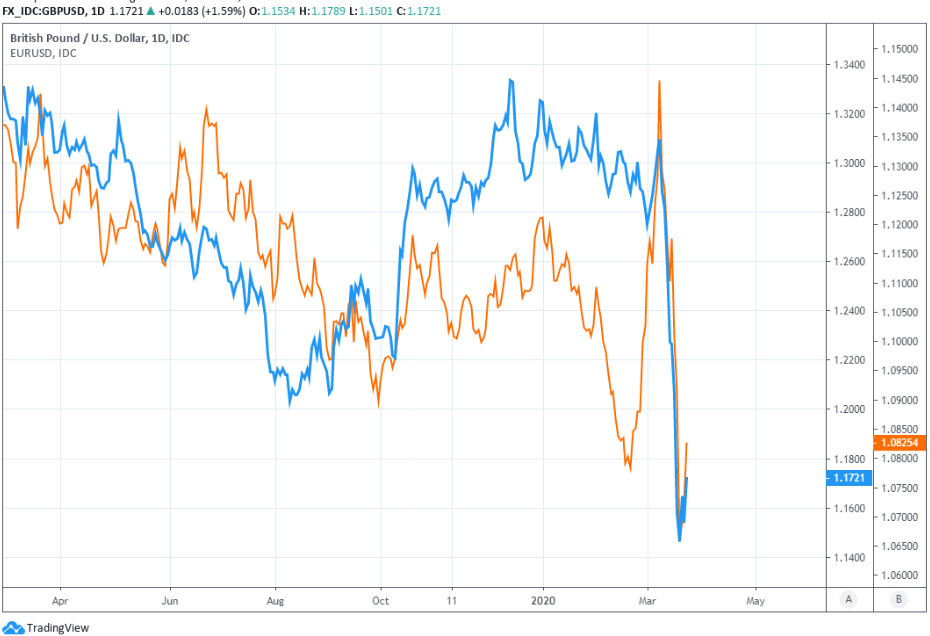 U.S. coronavirus infections rose by more than 13k Monday, the largest single day increase so far which has translated into a steeper epidemic curve, and if that rate of growth is continued over the coming days the world's largest economy could find itself being named the epicentre of the global coronavirus outbreak. That epicentre was still Europe on Tuesday, although Monday brought the first back-to-back decline in the number of new cases reported.

"The two straight daily declines in the number of new cases and deaths in Italy are consistent with the patterns in the data in China and Korea two weeks after stringent measures were applied there. This doesn't mean we can be sure the downshift in Italy will continue, but the data give real grounds for hope,"  says Ian Shepherdson, chief economist at Pantheon Macroeconomics. "If the recent numbers are correct, and sustained, and then confirmed by the deaths data, they will mark the beginning of the turning point in Europe's battle."

Epidemic curves and bilateral differences between them matter because they indicate the relative difference in time that economies are likely to be subjected to the damaging measures that are seen as necessary to contain the spread of the virus. And with the U.S. curve steepening and the supply pool of Dollars deepening at a time when some countries on the European continent appear to be getting a grip on the virus, the outlook for the Dollar is darkening.

The Dollar Index was lifted more than 5% over the last fortnight as investors sold financial assets like stocks and bonds en masse before rotating into cash and given the sheer scale of the amounts in question, the Dollar was the only viable destination for investors participating in the great rotation into the most liquid of assets. CIBC and Saxo Bank say the Fed's actions should be enough to unwind that gain over the coming weeks, although technical analysts who draw insights from trends and momentum on the charts rather than central bank action, say that Tuesday's falls are simply corrective in nature and that it's only a matter of time before the greenback rises again. 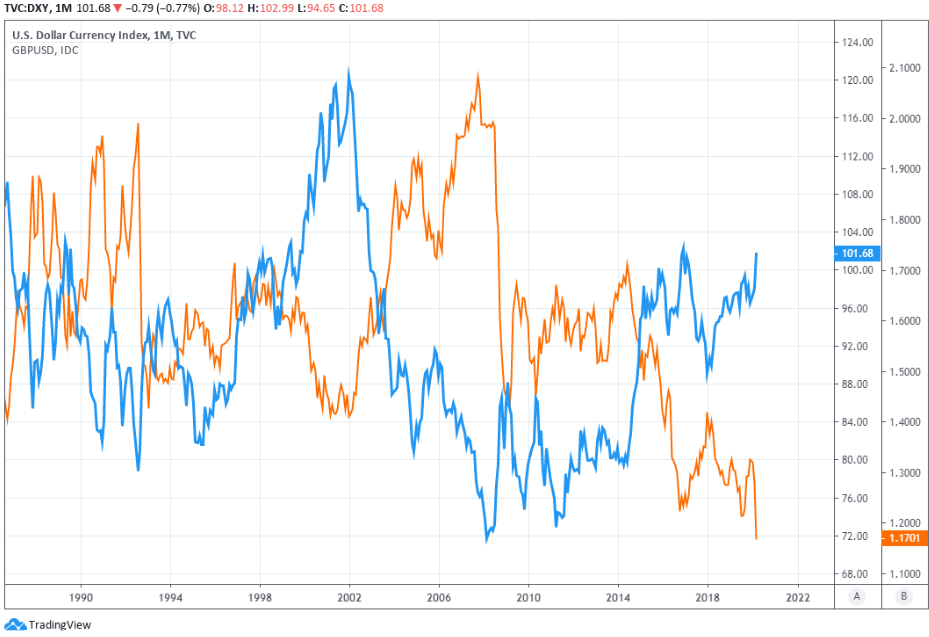 "The US Dollar index charted a high of 102.99 last week. US Dollar Index - Daily This new high was accompanied by a large divergence of the daily RSI, this reflects a loss of upside momentum. We also note the TD perfected set up on the daily chart and the 13 count on the 240 minute chart, all imply that the market is in need of consolidation and/or a correction lower," says Karen Jones, head of technical analysis for currencies, commdities and bonds at Commerzbank. "We would allow for a retracement back into the 99.80/98.80 (38.2% and 50% retracement), but we should see recovery from there."

Jones says Tuesday's Pound-to-Dollar rate rally is likely to fizzle out before the British currency gets back to 1.2085 and that it's likely to fall back to 1.14 after that, before eventually targeting a fresh 1985 low at 1.0463. Meanwhile, the Euro-to-Dollar rate is on the defencive and has been tipped by Jones for a fall to 1.0457 and potentially 1.0340 over the coming days and weeks, which could have significant implications for the Dollar Index.

Those two exchange rates account for more than two thirds of Dollar Index flows so if they were to decline in line with Jones' analysis then the broad Dollar could find itself on the offensive again, and that's before movements in any other exchange rates are taken into account. Gains for the USD/CAD, USD/JPY, USD/CHF and USD/SEK rates, if coming alongside losses for Sterling and the Euro, could lead to another substantial leg higher by the Dollar.