-USD strength, GBP losses in focus at Fed and BoE this week.

-Deficit set to rise above 5% GDP on measures announced so far.

-At a time when current account deficit concerns haunting GBP.

-Bank of England set to address GBP weakness this Thursday.

The Pound-to-Dollar rate closed out its worst week since the financial crisis on Friday as financial markets continued to hemorrhage capital, although the charts are still tipping the exchange rate lower while few if any fundamental analysts see the Dollar weakening any time soon,

Pound Sterling briefly traded at its lowest level against the Dollar since 1985 last week as investors dumped risk assets and even jettissoned typically safe-haven government bonds of many major economies from their portfolios. Investors bought Dollars with the proceeds of other asset sales although they didn't appear to buy much else and the greenback's resulting gains have been so large the Federal Reserve (Fed) is now pushing back against it.

The Fed extended Dollar swap lines to nine new central banks last week in a move that will enable others to sell Dollars on the open market and lift their domestic currencies without burning precious foreign exchange reserves. The decision indicates concern about liquidity and potentially, the strength of the Dollar. It came not long afterBank of England (BoE) Governor Andrew Bailey told Sky News he'll address recent weakness in Sterling this Thursday.

Taken together, the currency problems of the two central banks have added another layer of uncertainty to the outlook for the Pound-to-Dollar rate this week, which is a bearish outlook according to technical analysts.  As a result, and as much as the charts are pointing lower, there's a chance the Fed and other central banks will act to weaken the Dollar sooner or later, which could then put a floor under the Pound. But exactly when that happens is anybody's guess.

Jones says "rallies will make no impact on the chart" so long as the Pound-to-Dollar rate remains below the 1.2194 level and that Sterling ideally needs to recover as far as 1.2682 in order to alleviate downward pressure on the charts. She's betting the Pound-to-Dollar rate will fall to 1.0463 within the next three weeks and tips it to remain near that level over the next three months. 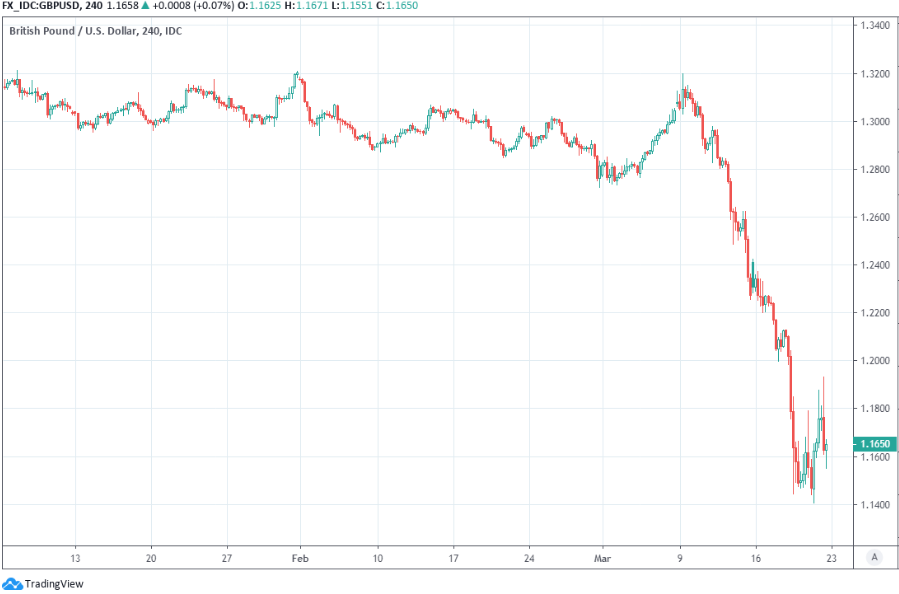 The Dollar Index has risen 5.77% for 2020 and the Pound-to-Dollar rate has fallen -12.7%, with most of those moves taking place since the latter part of February. Both are potentially problematic for the respective central banks because a weaker Sterling can raise import prices and lift inflation, which might then weigh on GDP growth. Meanwhile a stronger Dollar will reduce U.S. import costs, lower inflation and might support some parts of the economy - although it'll hurt an already-damaged export sector.

“The perfect storm of an exponential rise in volatility coupled with the deterioration in USD funding/liquidity conditions places the focus squarely on the current account debtor nations and their ability to finance that deficit,” says Kamal Sharma, a strategist at BofA Global Research. “This process cannot go on ad infinitum and our focus will be on whether the pace of GBP/USD selling starts to abate. There are signs, albeit tentative that GBP/USD selling has slowed in the US session. Providing month-end passes without incidence, we think GBP/USD could gravitate back towards $1.20.”

Dollar strength and Sterling weakness comes with large parts of the global economy at a standstill due to the coronavirus including meaningful parts of the UK and U.S. economies. So-called 'lockdowns' and other 'social distancing' measures are intended to slow the virus' spread enough for the health systems to avoid collapse, although they come with large economic costs that are necessitating unprecedented debt-funded government expenditures at a time when national balance sheets are already stretched.

Uncertainties about costs and fiscal health have driven an exodus of investors from risk assets and a rotation into Dollar cash that wounded Sterling. The Pound fell more than 5% Wednesday, suffering disproportionately in what some analysts say was the result of the UK's large current account deficit, which sees Sterling depend for part of its value on continuous inflows of foreign capital. Those flows appeared to give Sterling a wide berth last week and they could do again over the coming days if investor baulk at the prospect of having to underwrite the government's latest coronavirus containment measures.

"The dollar has so far been the only winner in this crisis. We think we’re not too far away from Washington having a more formal problem with dollar strength as yet another round in the currency war unfolds. There is much uncertainty, but we see the dollar handing back recent gains into the summer," says Chris Turner, global head of markets and regional head of research for UK & CEE at ING. "The FX recovery against the dollar is likely to be tentative at first. Commodity currencies look certain to lag, but those countries employing pro-active fiscal policy (Asia and Europe) may be the first to bounce." 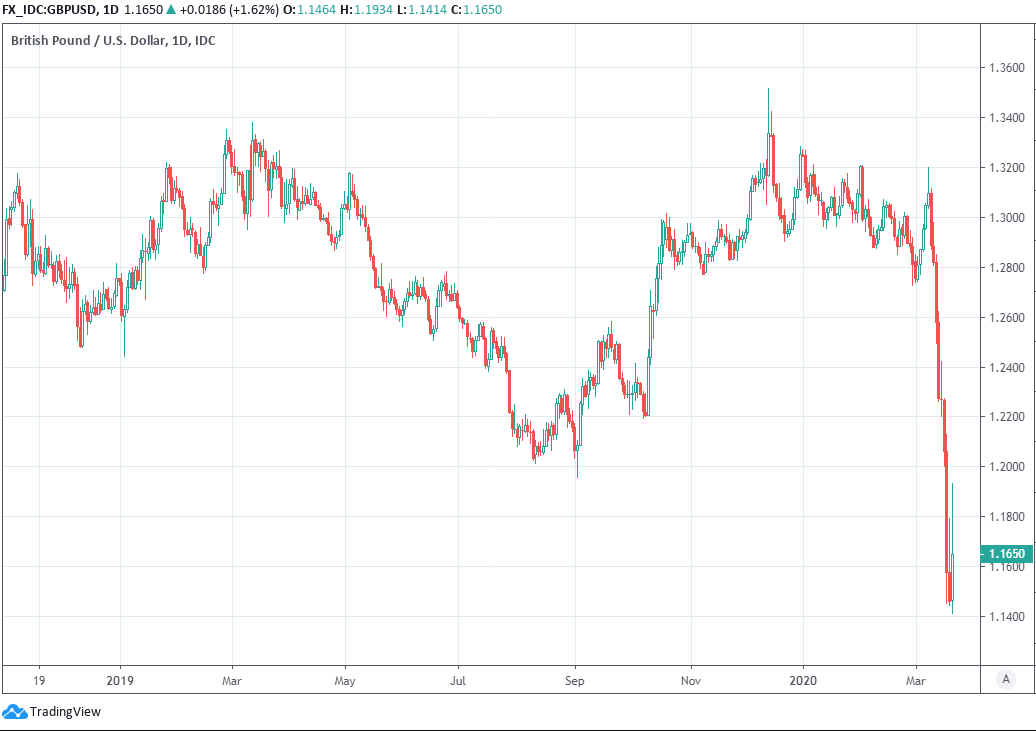 Chancellor Rishi Sunak said Friday the government will cover 80% of  wage bills where necessary if it enables workers to keep jobs rather than be laid off due to government orders that some businesses close. He also deferred payments of VAT, the government's third largest source of tax income, in another effort to help businesses but some economists say the measures could cost as much as £110bn or 5% of GDP that will add to the budget and current account deficits. This was after Boris Johnson 'ordered' the closure of pubs, cafes and restaurants, but with the coronavirus bill yet to make it onto the statute book. That bill, if passed, will give government ministers unprecedented powers to act without debate or scrutiny for up to two years.

"In Europe, the UK continues to lead the way in a joined up, well communicated, substantial economic policy response. Despite the scale of the economic policy action, an unprecedented hit to UK GDP cannot be avoided," says David Owen, chief European economist at Jefferies. "Our working assumption is that government borrowing rises towards levels last seen in the financial crisis and that 20 or more percentage points could in general be added to government-debt GDP ratios. For the UK this is less of an issue, but for Italy and other countries inside EMU this could become a significant problem."

Investors' judgements on the affordability of Sunak's measures will be a key influence on the path of Sterling over the coming days, largely due to the impact they could have on the current account deficit. And so too will the Bank of England, whose policy announcement will be scrutinised keenly by the market at 12:00 Thursday even though the bank has already fired most of its policy bullets. The BoE cut Bank Rate to 0.1% last Thursday, its so-called zero lower bound, and added another £200bn to its QE program in an apparent effort to put a lid on yields. Yields had rocketed as investors sold typically safe-haven government bonds alongside stocks, commodities and all other risk assets in an exodus from the UK that put severe pressure on Sterling.

Any suggestion by the BoE that it intends to intervene in currency markets could support the Pound-to-Dollar rate in the latter half of the week.

"Coronavirus has unleashed a huge sell-off in financial markets that has seen the FTSE 250 fall by 40% and investors even pull their money from traditionally safe assets like government bonds. While there are many casualties, the pound has been hit hard. It's fallen from $1.31 a week ago to a 35-year low of $1.15. The UK Government's relatively laissez-faire approach to "social distancing" and the risk of the UK leaving the Brexit transition period without a trade deal at the end of the year may be contributing factors. But the UK's 5% of GDP current account deficit, which was funded previously by inflows of investment into stocks and bonds that have now dried up, is surely the most important factor. It suggests that the fall in the pound won't be reversed until investors are much happier," says Paul Dales, chief uk economist at Capital Economics. 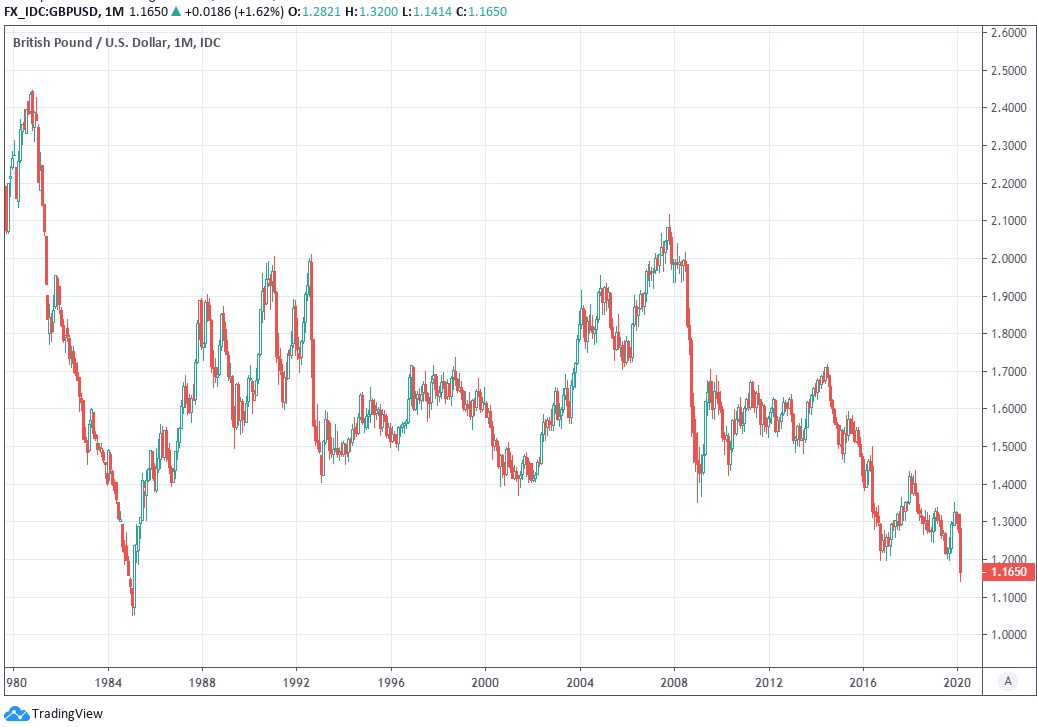