- GBP/USD technical outlook has turned neutral, is still to play for.

The Pound has suffered another setback against the Dollar and now the technical outlook is all to play for, although the acrimonious tone of talks between the UK and EU could soon weigh heavier on Sterling.

The Pound reclaimed the 1.29 handle Friday after climbing back above the 1.2872 threshold which, according to technical analysts, is key to preserving the post-summer uptrend in the Pound-to-Dollar rate.

"We have not closed below the 1.2872 low. For today we suspect a bounce higher, beyond that we are neutral," says Karen Jones, head of technical analysis for currencies, commodities and bonds at Commerzbank in an early morning research note. "We are back to not knowing if this is a top or not, having failed at the 55 day moving average at 1.3055 and the short term downtrend at 1.3075, the risk has shifted to the downside." 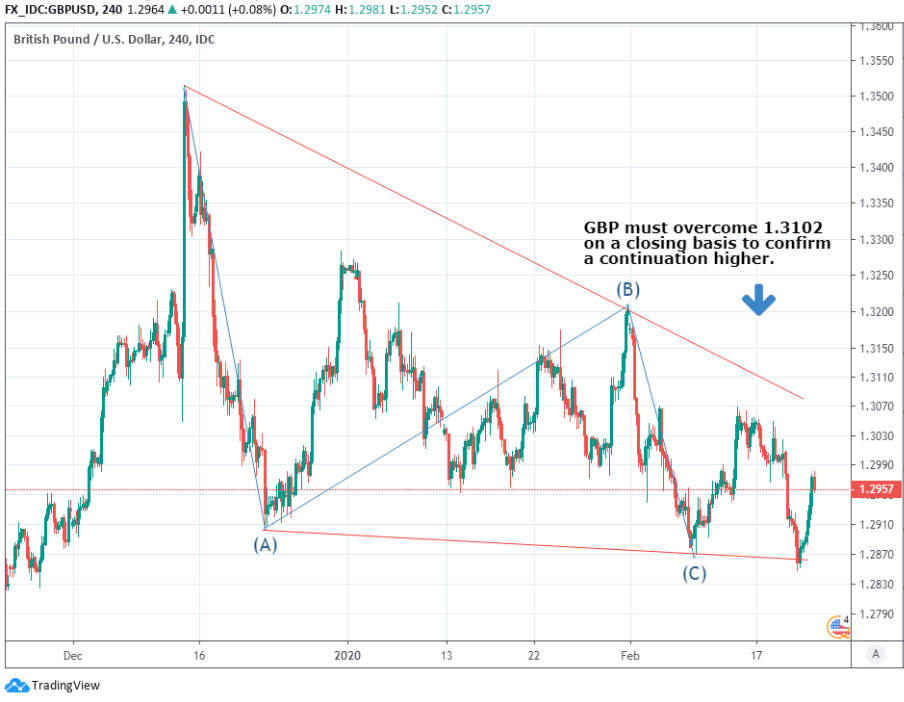 Sterling retreated from a strengthening Dollar from mid-week, taking it briefly below the 1.2872 level in Thursday trading and indicating that further losses could be just around the corner. But Jones says the "intraday Elliott wave" is implying the down-move has ended and the new low was "not confirmed" by the relative-strength-index, which typically indicates waining momentum.

The British currency has continued its retreat from post-election highs thus far in 2020, carving out a series of lower-lows on the charts amid repeated failures to gather any kind of sustained upward momentum. And those failures, combined with Friday's signals from the charts, have led Jones and the Commerzbank team to turn neutral in their short-term outlook for the Pound-to-Dollar rate. 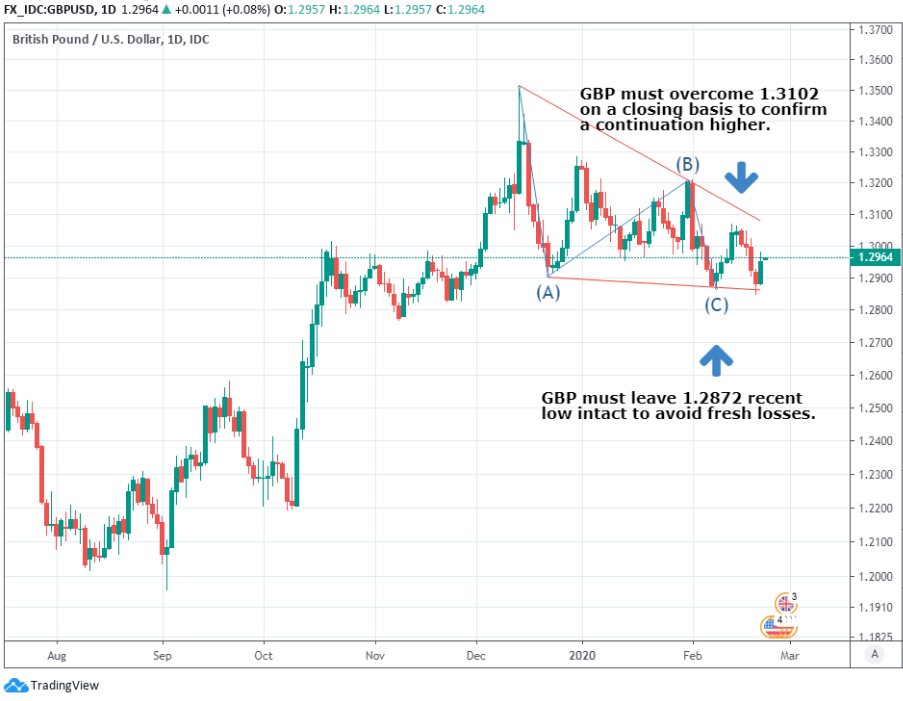 Pound Sterling ceded ground to most rivals last week and with the economic data calendar falling quiet for the week ahead, the Sterling-negative tone of the Brexit negotiations and other international factors are expected to drive price over the coming days.

“The first official data for January piled more evidence onto our view that the economy will rebound in Q1 2020 after hitting a nadir in Q4 2019. But the growing impact of coronavirus on China's economy and the weakness in the euro-zone threaten to stifle UK GDP growth over the next few months,” says Thomas Pugh, an economist at Capital Economics.

Beyond the Brexit talks, Pound Sterling will be driven by risk appetites and the movements of other currencies. And risk appetite has for weeks been driven by the ebb and flow of market concerns over the coronavirus that’s now escaped China’s borders.

South Korea, Japan and Italy reported small clusters of coronavirus cases last week, stoking fears that the outbreak of the deadly pneumonia like disease could drag on for longer than was initially envisaged by investors and do more economic damage. And South Korea raised the alert level to its highest at the weekend after the number of infections surged from 204 on Friday to more than 600 Saturday, while Italy has quarantined villages and towns in the north after it discovered a total of 130 cases - up from single digit numbers on Friday.

“There is growing evidence that the prolonged shutdown of much of China’s economy could restrain UK manufacturing output and possibly even retail sales over the next couple of months. Indeed, the economic fallout from the coronavirus means the global economy may not grow at all in Q1,” says Pugh.

The Dollar fared well against most rival currencies last week, remaining the top performer for 2020 and is tipped by multiple analysts to advance again this week as the U.S. economy continues to demonstrate its exceptionalist credentials while benefiting from an apparently lesser exposure to the Chinese economy.

Major U.S. economic figures will be few and far between in the week ahead although investors will take heed of Tuesday's Conference Board consumer confidence number, Thursday's core durable goods orders figures and Friday's core PCE price index. Investors will be attempting to assess what impact the coronavirus has had on household confidence and business investment because both are important pillars of the economy.

"The stalling of supply chains amidst the spread of COVID-19 likely thwarted orders in February, adding to the industrial sector’s challenges stemming from the halting of production of a major aircraft. That should leave business investment as subtracting from growth in Q1," says Katherine Judge, an economist at CIBC Capital Markets. "consumer confi dence could undershoot expectations early in the week, but income growth may have beaten expectations to start 2020. Core PCE infl ation likely moved a tick closer to the 2% target, although we aren’t as convinced as the Fed seems to be that this trend will continue past the current quarter."

The U.S. economy grew at a steady 2.1% pace in the final quarter last year while most other major economies slowed and so far in 2020, it looks as if that trend continued early in the New Year. Such economic exceptionalism is making interest rate cuts from the Federal Reserve even less likely than they were previously and entrenching the Dollar's yield advantage over rivals and buoying the U.S. currency.

Minutes of the January Federal Reserve (Fed) meeting showed on Wednesday the bank sticking to its well-worn script which dictates that a “material change” in the outlook for the domestic economy is necessary in order to force a change of its on-hold rate stance.

"Congestion data from Beijing, Shanghai and Guangzhou suggest that traffic is down 75% or so versus averages still. In other words, China is still effectively closed down, even in the regions that have so far not been (officially) hit severely by the virus," says Andreas Steno Larsen, a strategist at Nordea Markets. "Our main market take-away is that the US outperformance narrative will likely stay intact, since e.g. Germany is relatively worse off than the US due to the Chinese closedown. This also leaves us in the upper part of the USD smile during Q1 and into Q2. USD stronger for longer."

The Dollar has also been benefiting from safe-haven flows fleeing riskier assets in response to uncertainties thrown up by the coronavirus that's already hobbled China's economy and is now threatening South Korea and Japan. And when combined with recent U.S. economic outperformance and underperformance from elsewhere, the Dollar is beginning to appear unassailable.

And those safe-haven flows are expected to continue supporting the greenback in the week ahead, encouraged by the fact the elatively 'closed' domestic U.S. economy is thought to be more insulated than other large economies from any global slowdown that might materialise as economic damage is exported from China to other parts of the world.

"Investment flows continue to pour into US assets such as equities and bonds. We highlight EUR and JPY weakness as a key driver of broad-based USD strength, with USD/JPY standing out after a recent series of bullish long-term trend reversals. This has allowed the DXY to approach the 100.00 threshold – with a key resistance hurdle at 100.30 now within sight," says George Davis, chief technical strategis at RBC Capital Markets.