- GBP/USD verges on a technical breakdown this Thursday.

- Daily close below 1.2863 sends GBP back to October levels.

Pound Sterling had initially risen against the Dollar on Thursday after January retail sales data revealed signs of a post-election ‘Boris Bounce’ in retail spending but gains were swiftly pared away, with the British currency sinking to a fresh 2020 low as the Dollar advanced on all other than the Swiss Franc.

Thursday’s price action is bad news for Sterling-denominated buyers of the Dollar because it puts the British currency on course to for a decisive break to the downside from a multi-week consolidatory range. And a daily close beneath 1.2863 on Thursday is tipped to open door to further losses. 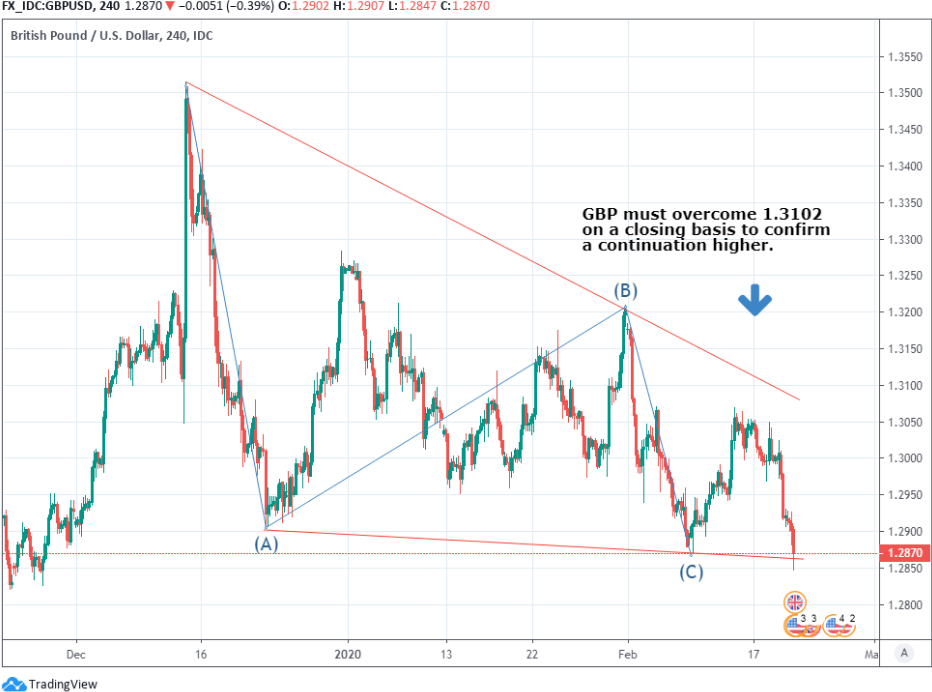 “Failure at 1.2872/63 (recent low) and support line would put the 55 week ma at 1.2800 and the 200 day moving average at 1.2691 back on the plate,” says Karen Jones, head of technical analysis for currencies, commodities and bonds at Commerzbank. "The overall pattern looks like a potential falling wedge (or continuation pattern) BUT this will only be confirmed by a close above the short term downtrend. This would then confirm the move higher."

Jones and many others had looked for a continued climb in the Pound this week as it appeared to be forming a “falling wedge” or “continuation pattern” which would have signalled gains to 1.3285 were in the pipeline. However, a daily close above 1.3102 was required to confirm the signal and Sterling has since retreated and was trading back at levels not seen since November on Thursday.

The Pound could yet resume its upward climb but much depends on price action as the clock strikes midnight Thursday, with a daily close below 1.2872/63 seen indicating that October’s pre-Brexit-deal levels are again a prospect. 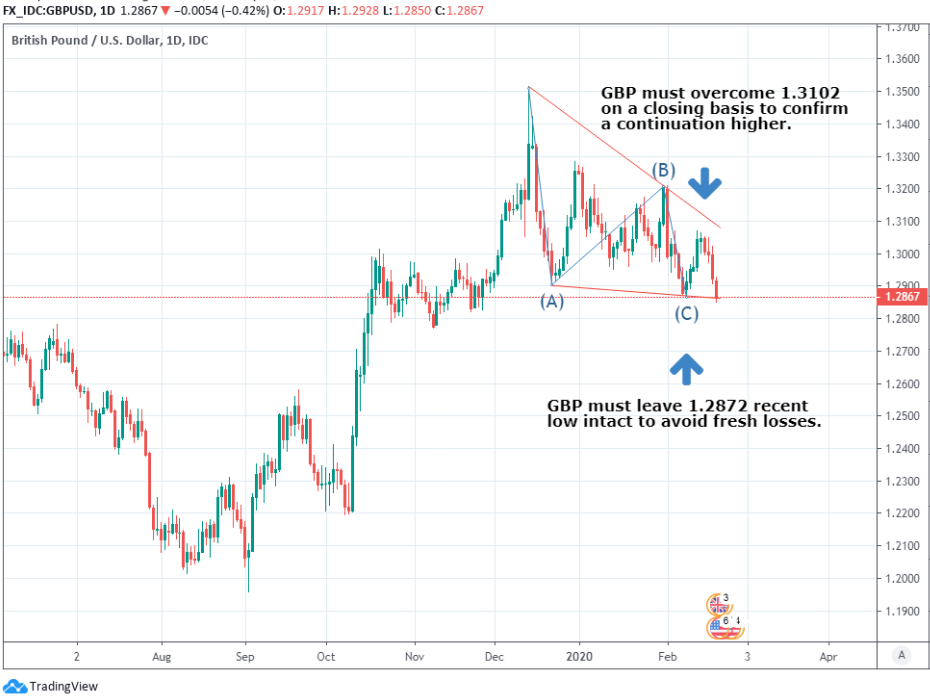 “The USD remains the standout currency of choice, DXY likely breaks 100 in a matter of days and on current form could see 102 on a 1-3mth horizon, though this would surely elicit complaints from the US administration. COVID-19 concerns have waxed and waned but regardless the USD has sustained a bid tone, underscoring the importance of very favourable relative growth dynamics,” says Richard Franulovich, head of FX strategy at Westpac.

Once positive sentiment toward Pound Sterling has been crimped of late by confrontational rhetoric from Brexit negotiators, although losses for UK exchange rates have also been substantially influenced by traditional fundamentals from both sides of the Atlantic.

In the UK higher inflation and retail sales have gone largely unrewarded because uncertainties about Brexit and the possible global economic impact of coronavirus mean rate hikes are off the agenda for the foreseeable future and that cuts to a 0.75% Bank Rate cannot be completely ruled out.

Meanwhile, the U.S. economy has been resilient and is thought to be more insulated from any global slowdown that could materialise as economic damage is exported from China to other parts of the world. That's good news for a Dollar that already has a substantial interest rate advantage over all rivals.

“While we are currently maintaining our view of the Fed remaining on hold in 2020, there are high and rising risks that the Fed will have to ease policy later this year. But these minutes do not give any indication of a shift yet and Fed Chair Powell’s recent testimony didn’t either – so the window for continued dollar strength remains open. The DXY Index is up 3.6% year-to-date and the highest since April 2017 – the post-Trump election victory highs of between 102-104 are now realistic near-term targets,” warns Derek Halpenny, head of research, global markets EMEA and international securities at MUFG.

Minutes of the January Federal Reserve (Fed) meeting confirmed on Wednesday that the bank is still not inclined to deviate from its well-worn script which dictates that a “material change” in the outlook for the domestic economy is necessary in order to force a change of its on-hold rate stance. That’s burnished the attractiveness of the Dollar in the eyes of investors. 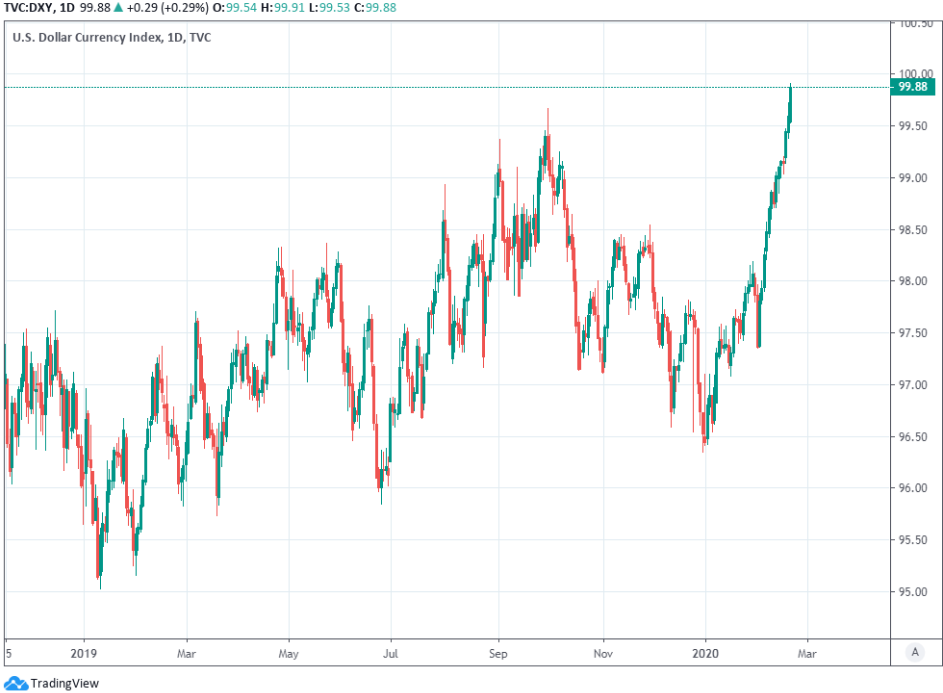 Concerns about the possible international spread of the new coronavirus from China, just as markets were beginning to believe the world’s second largest economy has the infection under control, are also lifting the Dollar.

"The standard relationship between AUDUSD and USDJPY has utterly collapsed. Higher USDJPY is typically a "risk-on" move which drags the AUD along with it. Now, both the JPY and the AUD are falling simultaneously vs the USD, and this bolsters the argument that USD strength is broadening," says Stephen Gallo, European head of FX strategy at BMO Capital Markets.

South Korea confirmed overnight that new coronavirus cases had more than doubled from 51 to 104 with one patient also succumbing to the virus.

This was after Japan confirmed that domestic cases had risen from 70 to 84 on Wednesday, with 14 of those cases said to be “asymptomatic” - which means they have the deadly disease but do not suffer from or show symptoms of it.

"USD/JPY broke above the 112 level as recession fears rise. Concerns about the longer-term impact of Covid-19 on regional economies and speculation around large financial outflows from Japan have contributed to the move. But the JPY fall now looks stretched based on our short-term model," says Francesco Pesole, a strategist at ING. 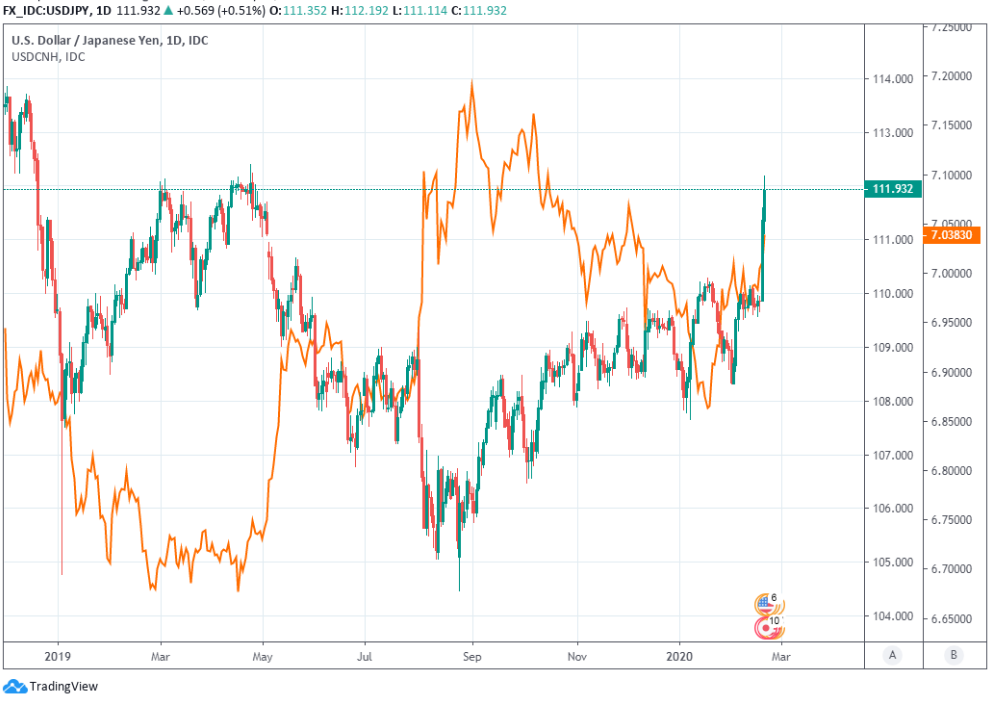 "The feeling is that markets are shifting their worries from the short-term (i.e. an escalation of the outbreak to a fully-fledged pandemic) to the longer-term (i.e. the economic slowdown in China). This is likely why the two key China proxy-currencies, both AUD and NZD have fallen along with the yen," Pesole adds.

Coronavirus cases are climbing in Japan as authorities prepare to disembark more passengers from the Diamond Princess amid concerns over infection control procedures on the ship that docked in Yokohama on February 03.

A man boarded the ship in Yokohama on January 20 and disembarked in Hong Kong on January 25 before the cruise ship arrived back in Yokohama on February 03. Since then more than 600 have tested positive for the virus including passengers, crew and Japanese officials managing the outbreak.

There were 3,700 crew and passengers and only 3,063 tests had been carried out as of Thursday when the confirmed infection number was 634.

“DXY rallied overnight to its highest level since May 2017. Concerns the negative shock to global economic activity from the coronavirus could turn out to be deeper and more protracted is supporting USD. Moreover, the minutes from the FOMC January meeting highlighted that participants viewed the current stance of policy as likely to remain appropriate for a time. This suggests the FOMC is in no rush to resume its easing cycle which bodes well for USD,” says Elias Haddad, a strategist at Commonwealth Bank of Australia. “USD/JPY surged by roughly 2% in the past 24hrs above 112.00. The trigger appears to be signs the coronavirus outbreak was spreading more rapidly in Japan.”