- But also advances on the JPY, CHF and SEK Wednesday.

- As Democratic Party primary process gets going in earnest.

The Dollar climbed Wednesday after capitalising on a dour day for European rivals but an otherwise rosy outlook is increasingly at risk of a political upset as the Democratic Party primary election gets going in earnest.

Investors were clearly in an upbeat mood Wednesday with many stock markets across the globe gaining nearly a full percentage point while oil price rose close to three percent as fears over the global economic impact of coronavirus ebbed further after the number of new confirmed cases in China declined again.

That saw the Dollar gain over the safe-haven Japanese Yen and Swiss Franc while ceding ground to most other rivals including the Pound as well as Canadian, Australian and New Zealand Dollars. 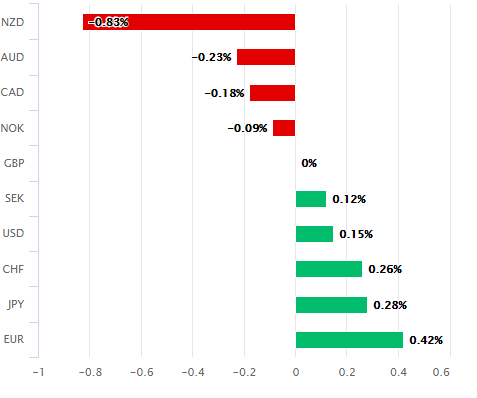 The greenback also rose against the Swedish Krona, the second smallest Dollar index constituent, although the lion's share of gains in U.S. currency benchmark were attributable to steep intraday declines in the Euro-to-Dollar rate. The Euro, which accounts for 57% of the ICE Dollar Index, was down 0.37% at 1.0879 against the greenback in late noon trading on Wednesday.

Europe's single currency was left bleeding early in the Wednesday session by Eurostat figures that revealed a surprise -.21% decline in Eurozone industrial production for December, confirming the continent's mighty factory sector continued to shrink into year-end. That data follows other figures that showed both French and Italian economies contracting in the final quarter and comes just days ahead of Germany's latest economic growth figures.

"It has called into question the ECB’s recent optimism that the euro-zone economy was beginning to stabilize and downside risks were easing," says Lee Hardman, a currency analyst at MUFG. "Persistently weak growth will keep pressure on the ECB to deliver further easing posing downside risks for the euro which is already weakening in anticipation of potential policy action." 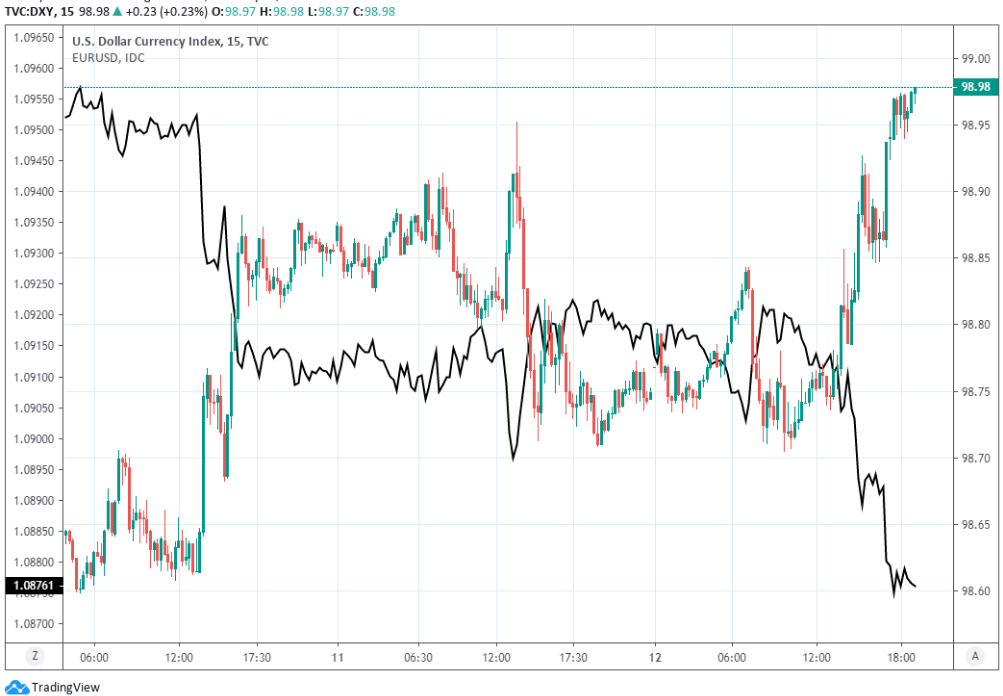 Above: Dollar Index shown alongside Euro-to-Dollar rate at 15-minute intervals.

Incoming data is painting a bleak picture of the Eurozone economy, leading some in the market to suggest the European Central Bank (ECB) could be forced to cut its already-deeply-negative deposit rate even further below zero in the months ahead in the hope of reviving the bloc's economic pulse. Although the Euro may also have suffered Wednesday from the 'funding currency' status afforded to it as a result of the ECB's uber low interest rates.

The Euro's widespread use in Europe makes it one of the largest and most liquid currencies on the market while the ECB's low rates make it super cheap for investors to borrow. And in recent years the combination of those things has meant that when investors are in an upbeat mood they tend to borrow and then sell Euros in order to 'fund' bets on higher-yielding assets further afield. And that can result in the Euro-to-Dollar rate falling as global stock markets, commodities and emerging market currencies rise.

"The market enters the day on a hopeful stance once again as riskier currencies across EM and in the G10 smalls are bid," says John Hardy, head of FX strategy at Saxo Bank. "Safe haven yields are higher and have taken the yen down a notch, but nothing is breaking just yet and the euro still looks very heavy here." 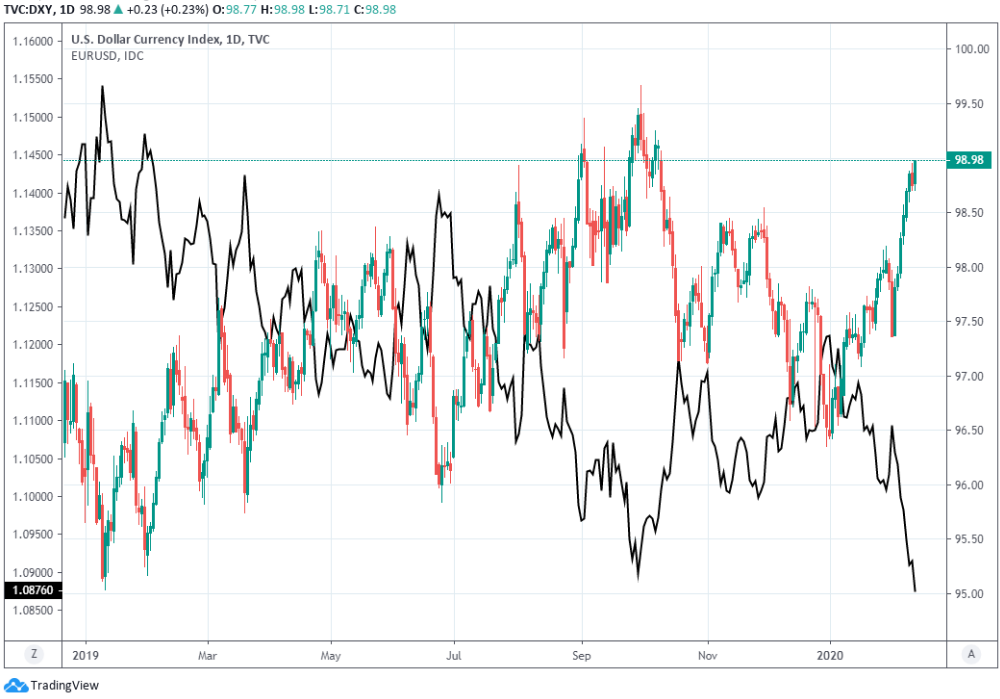 Above: Dollar Index shown alongside Euro-to-Dollar rate at daily intervals.

The above relationship means the Dollar index can post meaningful intraday gains even when the greenback has fallen relative to the Pound, Canadian Dollar and other 'risk' currencies that typically rise when investors are feeling more optimistic, or simply less pessimistic about the global economic outlook. That's exactly what happened on Wednesday although some observers are warning that the party in Dollar exchange rates could now be at risk from the Democratic Party primary election process.

The party process for determining its presidential candidate for November's election got going in earnest this month with members voting in 'primary' contests in the states of Iowa and New Hampshire. Washington stalwart Joe Biden fared poorly in both races while the centre ground candidate Pete Buttigieg surprised on the upside in each only to be pipped at the post by the runner-up for 2016's nomination, Bernie Sanders.

Sanders is a socialist who's put "Medicare for All", a "Green New Deal," "College for All" and "Workplace Democracy" at the heart of his election campaign. His ongoing popularity with Democratic Party voters is the only thing blotting an otherwise rosy copy book for the Dollar.

"Bernie Sanders’ win in the New Hampshire primary has cemented his position as the front runner," says Jonas Goltermann of Capital Economics. "Although many observers believe that his policies, which could have a detrimental effect on the stock market, will ultimately prove too radical to appeal to mainstream voters, we think that it would be unwise to dismiss his chances too quickly." 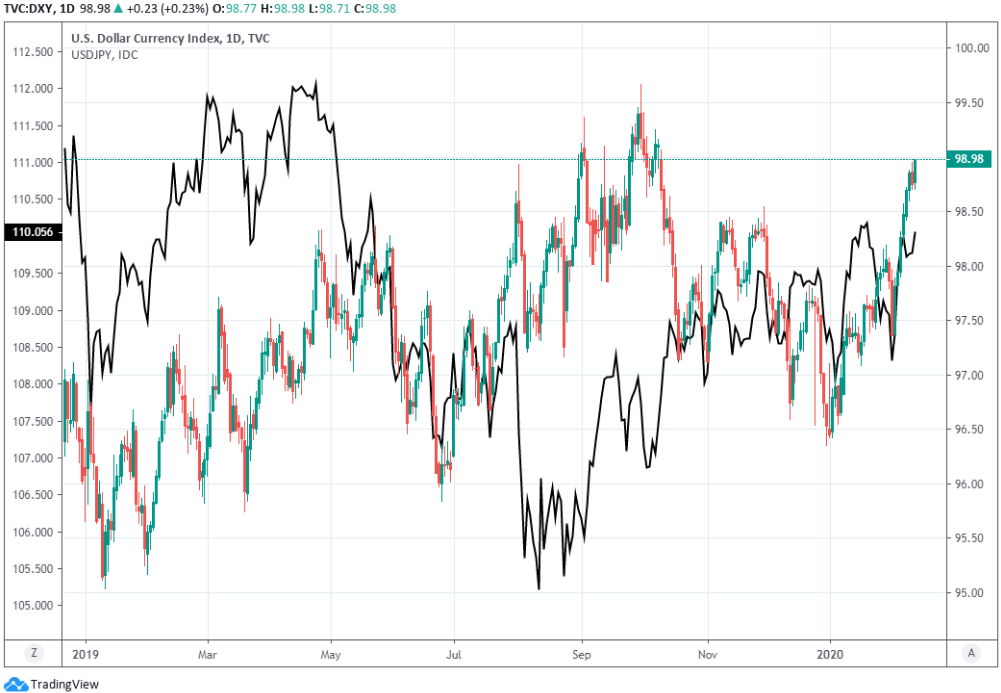 Above: Dollar Index shown alongside USD/JPY rate at daily intervals.

Much like with his British counterpart Jeremy Corbyn, who led the Labour Party to its worst post-war election defeat in December last year, Sanders' ideology is arguably the antithesis of the current free-marketeering and capitalist order. But markets are yet to really take note of his ascendant candidacy.

Financial markets have barely batted an eyelid at Sanders' performance in the Iowa and New Hampshire in part because conventional thinking is that he'd have little chance of being elected in a race against the incumbent President Donald Trump who, in spite of all his controversies, is the bookmakers' favourite to win. Capital Economics is just the latest in a growing line of observers to warn investors that they could be being complacent.

Capital Economics says stock markets would suffer from Sanders' pledges to raise taxes, lift minimum wages and to break up large banks as well as technology firms. And if U.S. stock markets were to be dealt a blow by a Sanders election win then the Dollar could face losses against the Yen, Swiss Franc and Euro as a minimum.

"A similar argument was made four years ago to dismiss Trump’s chances of winning first the Republican nomination and then the presidency itself," Goltermann says. "The upshot is that, although there is still a long way still to go (the pivotal ‘Super Tuesday’ primaries are three weeks away and even then only about 40% of votes will have been cast), Sanders looks to have the best chance of getting his name on the ballot in November. If he does, markets will eventually have to start pricing in a decent chance that he wins." 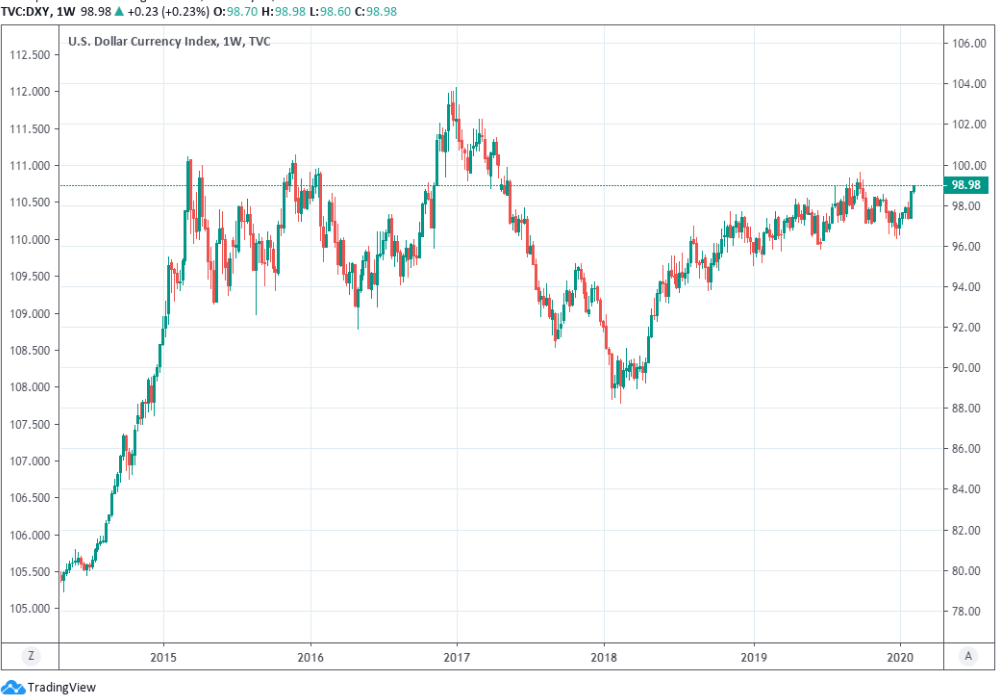 Pound-Dollar Week Ahead Forecast: Struggling as Dollar Pushes Back amid Threats to Recover…

The Pound-to-Dollar exchange rate rallied again last week but failed for a second time to overcome a key technical obstacle on the charts and could be in for a setback this week in response to the creeping prolongation of lockdown restrictions in the UK and elsewhere, which are seen offering support to the greenback. 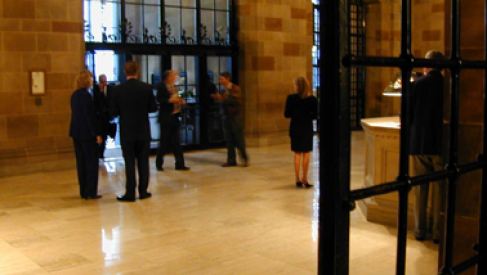 The Dollar steadied Friday as safe-haven and Euro satellite currencies softened amid concerns over the EU's budget, depriving them from participation in a rally among risk assets as a spat between the Federal Reserve (Fed) and Treasury loomed large over the U.S. economy.