The Dollar gave a tentative response to January's non-farm payrolls report Friday after wage growth surprised on the downside despite the economy creating news jobs at a robust pace last month.

Non-farm payrolls rose 225k in January, the Bureau of Labor Statistics said Friday, when markets were looking for only a 163k increase. That's up from the meagre 145k seen back in December, with gains the strongest in construction, health care, transportation and warehousing.

Investors gave the report a tepid as well as tentative response, however, due mainly to other less appetising details.

"Public hiring wasn't as strong as we expected, however, given that hiring for the 2020 census is set to ramp up, something that should materialize in the next few months," says Katherine Judge, an economist at CIBC Capital Markets. "Wages continued to disappoint on the month, however, upwards revisions left the annual rate a tick higher than expected at 3.1%. The strength in hiring supports our forecast for consumer spending to remain the main driver of growth." 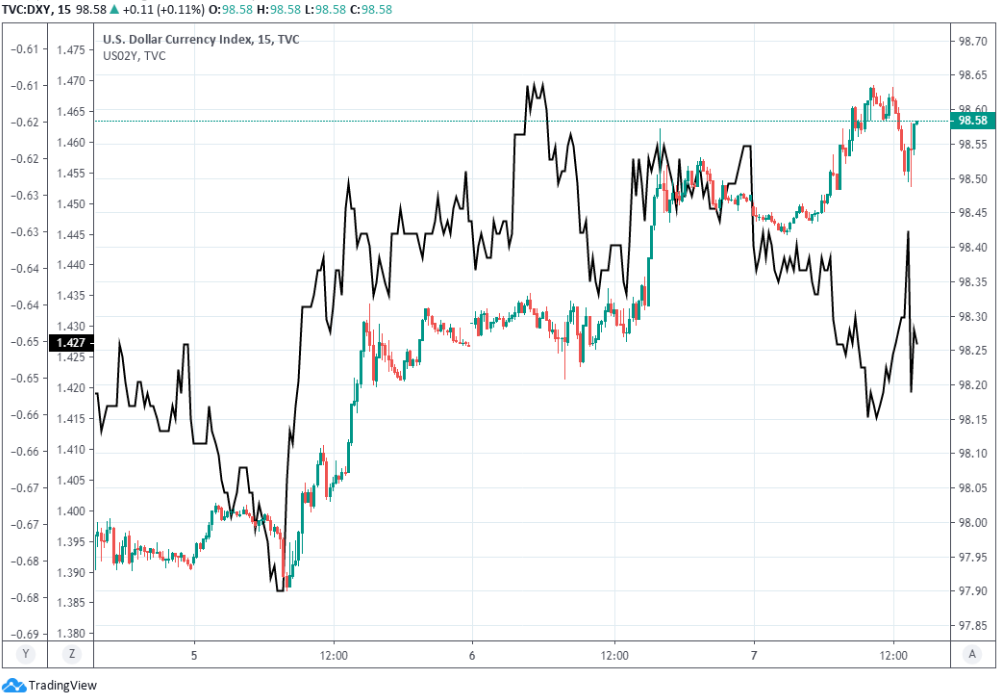 Average hourly wages, which are closely monitored by Federal Reserve (Fed) as well as investors, surprised on the downside with only 0.2% growth for last month when consensus had penciled in a 0.3% increase. And the unemployment rate surprised on the upside.

Unemployment rose to 3.6% in January from a multi-decade low of 3.5% although the increase might have more to do with a 0.2% rise in the labour force participation rate that's automatically increased 'unemployment' that's defined simply as somebody who doesn't have a job but is active in looking for one.

"The 225K jobs created is above the average pace of employment growth seen over the past six months and while the unemployment rate edged up to 3.6%, that reflected a two tick rise in the participation rate," Judge says.

The Dollar was higher against all major rivals other than the Japanese Yen and Pound ahead of the report, as investors took profits on earlier trades while responding to recent signs of a January strengthening in the world's largest economy. It remained bid following the report, with the Pound-Dollar rate's intraday gain dipping from 0.13% to 0.08%, leaving it quoted at 1.2934.

"Risky assets are coming off the recent all-time highs as the market is digesting a lot of conflicting signals on the economy and the impact from the Chinese coronavirus," says Peter Garnry, head of equity strategy at Saxo Bank. 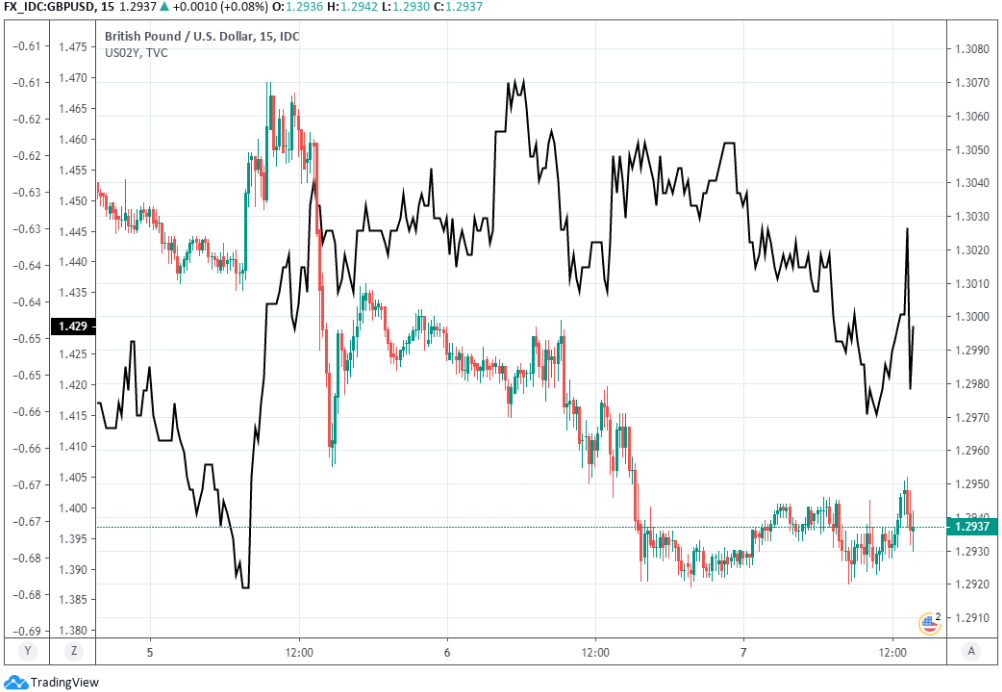 The Dollar has recoiled against many major currencies since Wednesday and has increasingly cut short an earlier rally in so-called risk assets since mid-week, given further signs of renewed divergence between the U.S. economy and those elsewhere in the world.

That curtailment was most evident in Australian Dollar exchange rates Friday although concerns about the outlook for the global economy have been best highlighted by price action in the Euro-to-Dollar rate, which has broken decisively to the downside from a four-month trading range this week.

"Another strong US jobs report supports the view that the US economy has made a promising start to 2020. It may well be that the US-China trade deal has reduced uncertainty and provided a platform for growth. Nonetheless, coronavirus fears in an environment of already subdued global growth underlines the risk of softer figures ahead," says James Knightley, chief international economist at ING.

Euro-to-Dollar rate woes explain a sizeable portion of gains in the Dollar index for this week as well as for 2020, with the Euro down 2.22% over the last month while the Dollar Index has climbed 2.28%. The Dollar Index has now gained The Euro has a more-than 50% weighting in the benchmark of the U.S. currency. 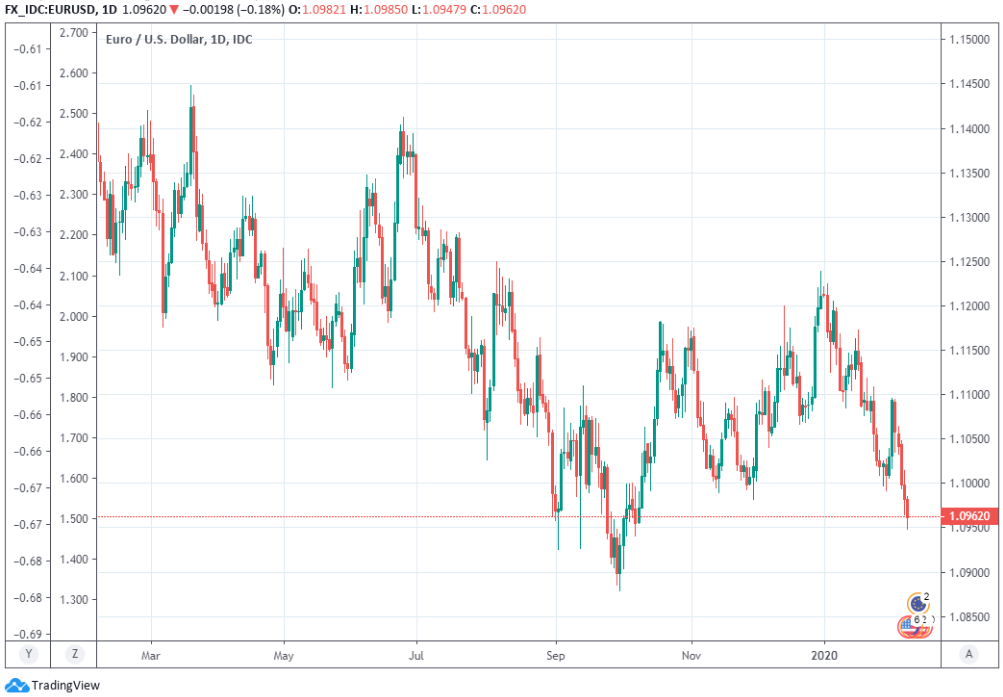 "Job markets still leave the current domestic economic backdrop in the US looking solid, and that largely before any effects of reduced trade uncertainty tied to the US-China trade truce of early 2020 has really had a chance to have a significant impact," says Nathan Janzen, an economist at RBC Capital Markets.

While the Euro has been breaking its multi-month range, the Dollar Index has overcome the top of a downward-sloping trend channel that leaves it well positioned for more gains up ahead, according to technical analysts, while the Euro should be at risk of further losses.

However, the outlook for the Dollar Index is complicated by the Euro's 'funding currency' status. That sees the Euro borrowed and then sold in order for investors to fund bets on higher yielding assets when the mood in global markets is upbeat, only for it to be bought back during times of risk aversion as the same investors seek to exit their bets on greener pastures further afield.

Those greener pastures are often emerging market currencies, which all tend to do badly when the global growth outlook is called into question in the way that it could still be if either Eurozone data remains dire or if the coronavirus newsflow deteriorates again. The outbreak in China is far from over and the risk of outbreaks in other countries is anything but negligible, while the ongoing economic standstill in China was already expected to deal a severe blow to global growth in at least the first quarter.

"The new coronavirus outbreak abroad has created some new risks to the near-term external growth backdrop, but there is little apparent reason for monetary policymakers to consider rate cuts at the moment, and we continue to expect the Fed to sit on the sidelines through 2020," Janzen says. 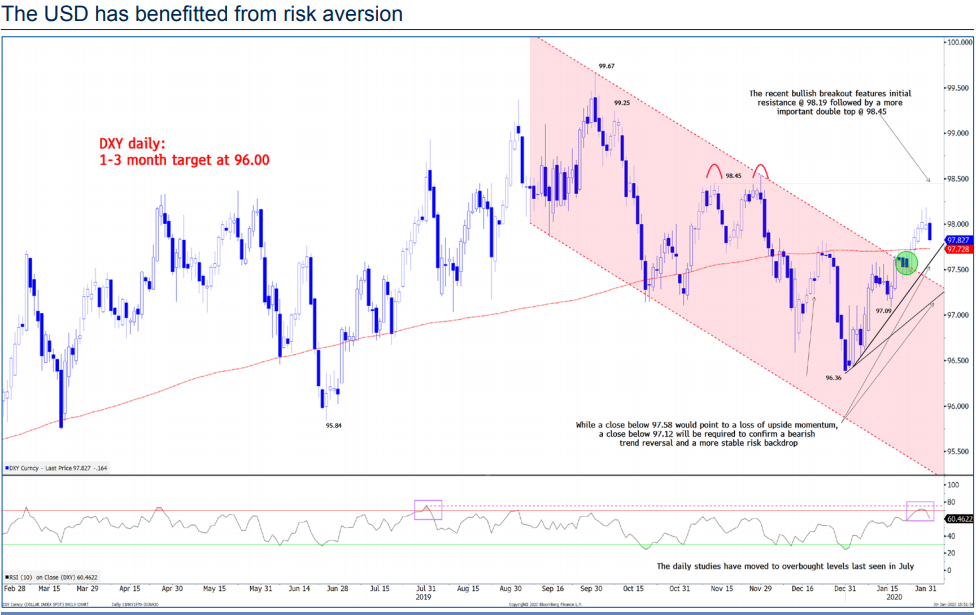