- GBP/USD rate tipped as a buy at UBS and BMO.

The Pound advanced broadly on Thursday but is being tipped by UBS and BMO Capital Markets to advance further against a wobbly Dollar over the coming days, due mainly to weakness on the part of the greenback and speculation suggesting a Conservative Party victory in the December 12 election.

Sterling was boosted on Thursday by a perceived improvement in the odds of a Conservative Party victory in the December 12 general election amid speculation suggesting the insurgent Brexit Party will only target a small number of the parliamentary seats that will be up for grabs in the ballot. With the electoral field crowded by remain-backing parties, that could leave the governing Conservatives as the only viable option for Brexit voters.

December's election will see Boris Johnson seek public support for him and his EU withdrawal agreement, while a majority for his party would likely see the UK avoiding a 'no deal' Brexit but also moving further along the path toward an agreed future relationship with the EU. That's a type of balm for the economy, which has suffered of late amid multiply delays to the UK's departure and chronic uncertainty over future trade arrangements.

"Look to buy GBPUSD on dips. While tail risks of a disorderly Brexit are fading, election uncertainty is creeping into the market. On balance there should be a mild bid tone to GBPUSD, unless the ruling Conservative Party start to lose meaningful ground to the opposition Labour Party in the polls," says Michael Nair, a spot FX trader at UBS. "If GBPUSD takes out the resistance at 1.2950/55, it would open up a move to 1.3000/20...there is support into 1.2900, followed by 1.2840/50 and then 1.2800." 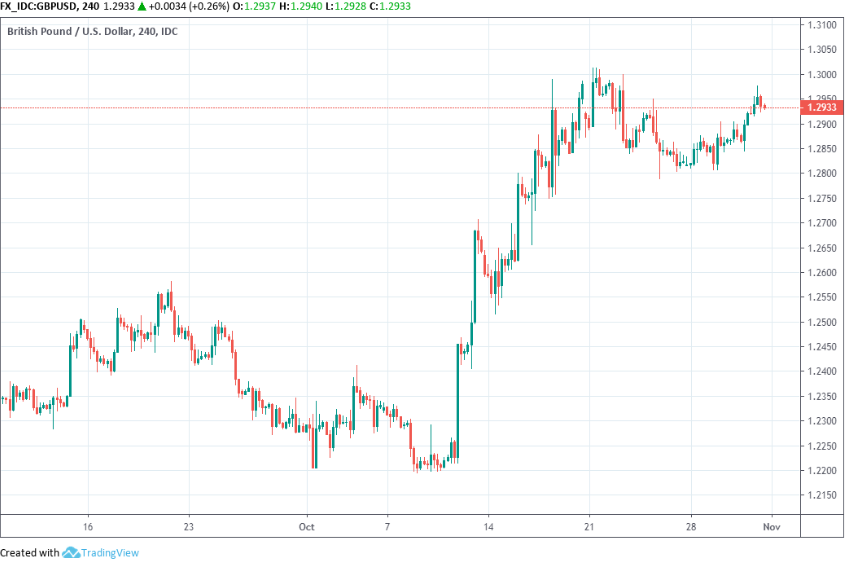 December 12 wil be the third time voters have been asked to choose a government since the summer of 2015 and surveys of voting intentions suggest it will be a tight race between four horses. The Conservatives have their proposals, the Liberal Democrats are running on an anti-Brexit ticket and the Brexit Party is flogging a 'no deal' or 'clean break' Brexit while the official opposition Labour Party is pledging to rerun the 2016 referendum with a choice between a yet-to-be-negotiated agreement and 'remain'.

Brexit averse markets have come to express a preference for the Brexit-backing Prime Minister and Conservative Party's partly because of other risks associated with all of the opposition parties. The Liberal Democrats, the more economically moderate party within the opposition, is unlikely to be able to form a government without the support of either the Labour or Scottish National Parties (SNP) and potentially both, which makes them problematic for the Pound and for the economy even if they do seek to cancel the UK's EU exit one way or the other.

The SNP could be likely to demand another independence referendum for Scotland as the price of going into coalition with anybody while the opposition Labour Party, under its openly Marxist leader Jeremy Corbyn and front bench of avowed socialists, is seen as a Brexit-order economic risk. A doubtful commitment to private property rights, fiscal profligacy and a keen desire for higher taxes are among the reasons markets recoil from Jeremy Corbyn's Labour Party almost as much as they do from Brexit.

"The key question is "will today's Chinese headlines be enough to shift things decisively in the opposite direction for the USD?" We're not yet convinced of that, because the other big factor in the global picture right now is the prospect of a Brexit resolution (i.e. another sort of "Phase 1" event)," says Stephen Gallo, European head of FX strategy at BMO Capital Markets. 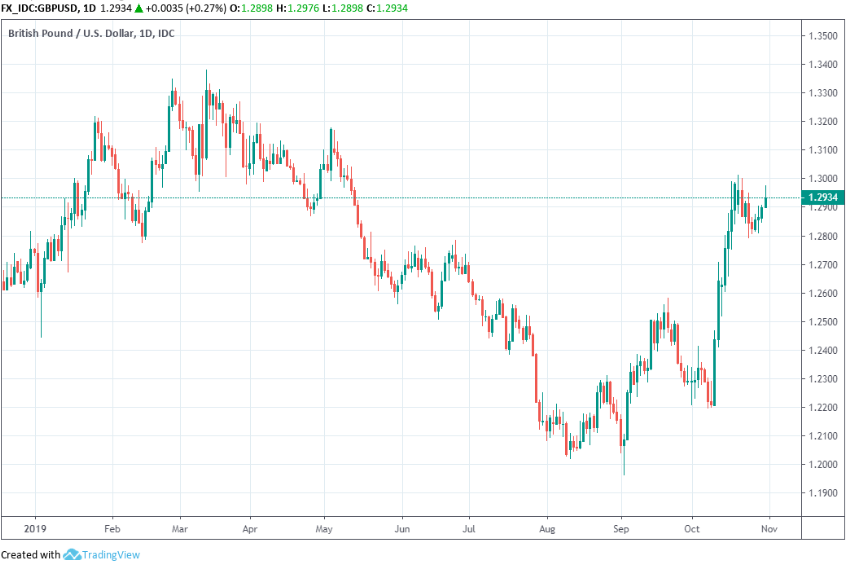 "The GBP has remained in demand over the past couple of sessions, and we get the impression that a re-test of levels at or above 1.3000 in GBPUSD is imminent. If we had to put a trade on in that pair now it would be to buy it at 1.2944 with an initial stop at 1.2790 and a target of 1.3300. For the time being, it looks as if FX investors are going to start to price in the prospect of a Conservative majority," Gallo writes, in a note to clients Thursday.

The UK's exit from the EU is on hold until January 31 2020 or the moment Johnson's deal is ratified, whichever is sooner, and with a Conservative victory in December the latter of those two scenarios could become the more likely one. That would mean a new chapter in the Brexit saga opens, one where the current U-EU commercial order would be frozen in time while another negotiation is conducted, likely away from the pubic eye and without a running commentary.

That might then enable Pound-to-Dollar rate, and markets more broadly, to go back to taking their cues from more traditional fundamentals like the condition of the economy and outlook for interest rates. And it's potentially a favourable time for the such a shift in focus to take place, with the Federal Reserve (Fed) having scrapped and melted down on Wednesday, its crown as the highest yielding major currency, which undermined the Dollar throughout Thursday's session.

"GBP/USD is consolidating above near term support offered by the 1.2784 25th June high. This leaves the market well placed to tackle psychological resistance at 1.30. Dips are indicated to hold circa 1.2760/00 and should recover from here. Directly above here we have the 200 week ma at 1.3138 and the 1.3187 May high and these remain our short term targets," says Karen Jones, head of technical analysis at Commerzbank. 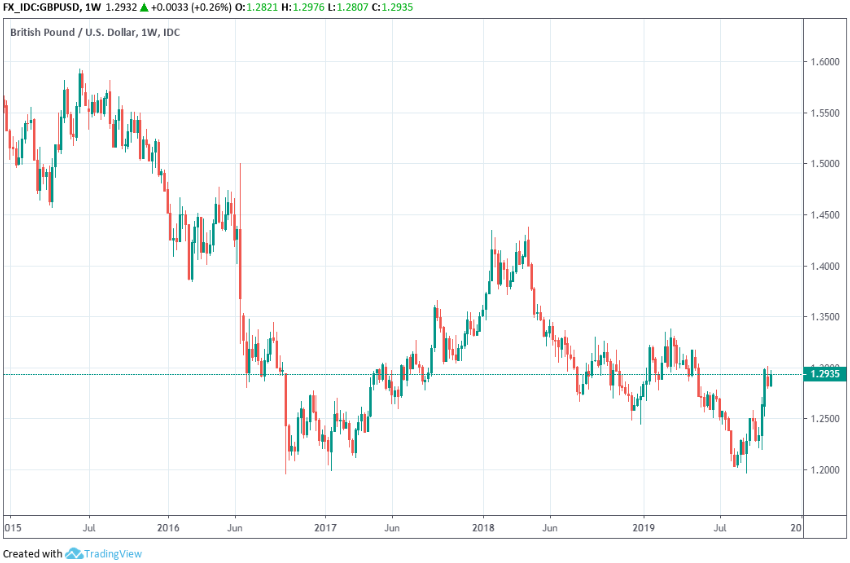