- Pound to be moved by Brexit news

The Pound-to-Dollar exchange rate is trading at 1.2974 at the start of the new week after rising 2.61% in the week before. Studies of the charts suggest the pair is likely to continue higher as the short-term uptrend extends.

The 4 hour chart - used to determine the short-term outlook, which includes the coming week or next 5 days - shows how the pair has broken above a long term trendline and followed-through higher. 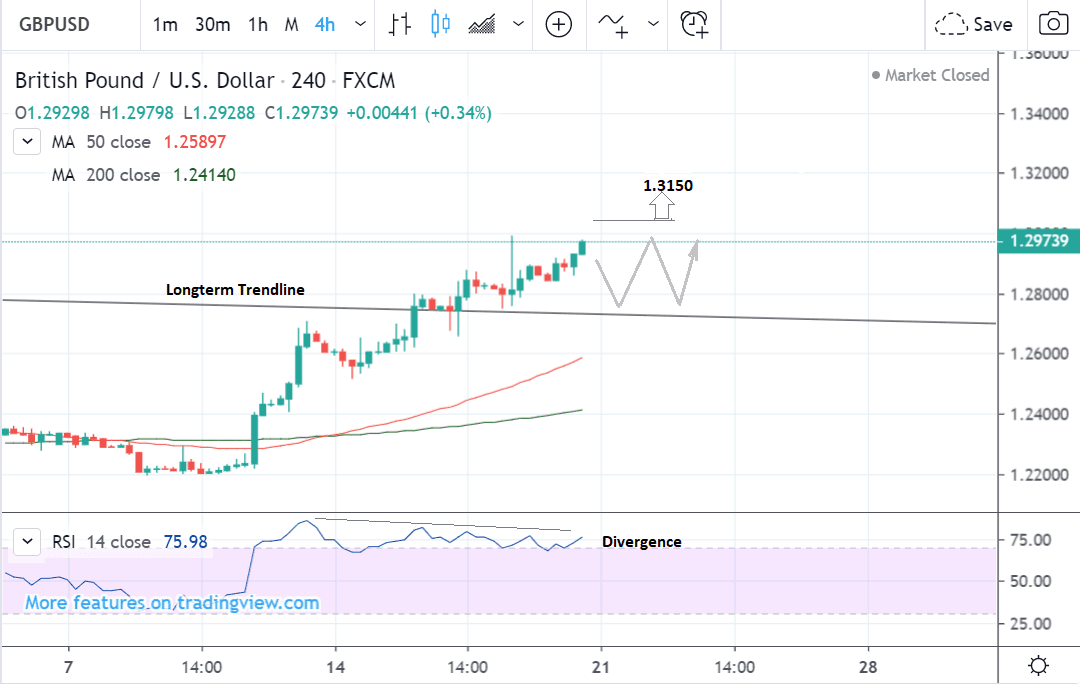 It has now nearly reached the key 1.3000 psychological level where there is a heightened risk of traders closing their bullish bets and taking profit.

This could lead to a temporary pullback or consolidation, however, the uptrend is then expected to resume and push the pair even higher.

A break above 1.3025 would provide added confirmation of a continuation up to a target situated at 1.3150.

The RSI momentum indicator is in the overbought zone suggesting an added risk the pair may either pull-back or go sideways.

It is also diverging bullish with price which keeps rising whilst momentum has actually gently fallen over the same period.

This divergence heightens the risk of a temporary correction although it doesn't negate the uptrending bias entirely.

Any pullbacks are likely to find support at the trendline, as it is often the case on charts that lines which provided resistance, once breached, reverse roles and then provide support.

The daily chart shows a similar picture - the pair has broken above a major trendline and is tipped to continue higher to a target at 1.3150 where a major moving average lies; meanwhile the overbought RSI reading suggests the risk of a temporary pull-back along the way. 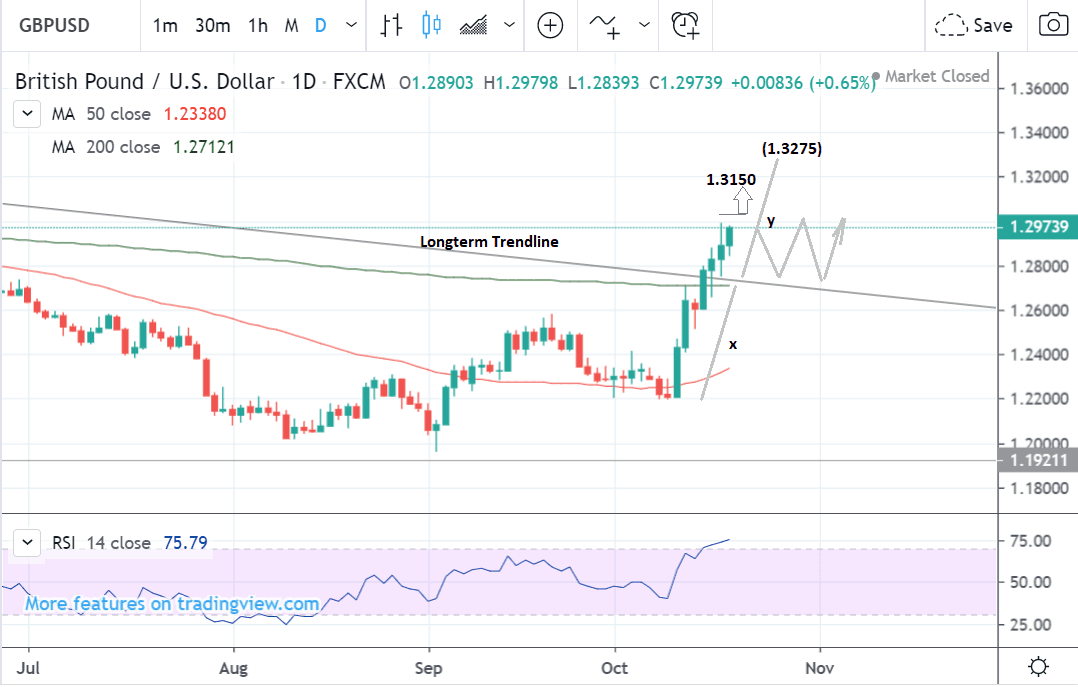 Yet in the case of the daily chart, there is also a suggestion of a higher bullish target in the upper 1.32s.

The pair has breached a long-term trendline and this is a bullish sign. But how to forecast how much higher it is likely to go from here?

Analysts have long noted a tendency for prices to move the same distance higher as the move immediately prior to a trendline break.

On GBP/USD, the move immediately prior to the break, labeled ‘x’, when extrapolated higher results in a move labeled ‘y’ which ends at around 1.3275.

Ultimately, this is only a hypothetical target and our base case scenario is for the pair to hit 1.3150 and then pull back down, before eventually pushing higher at a later stage.

The weekly chart shows how last week the exchange rate pierced through the major trendline like a hot knife through butter. 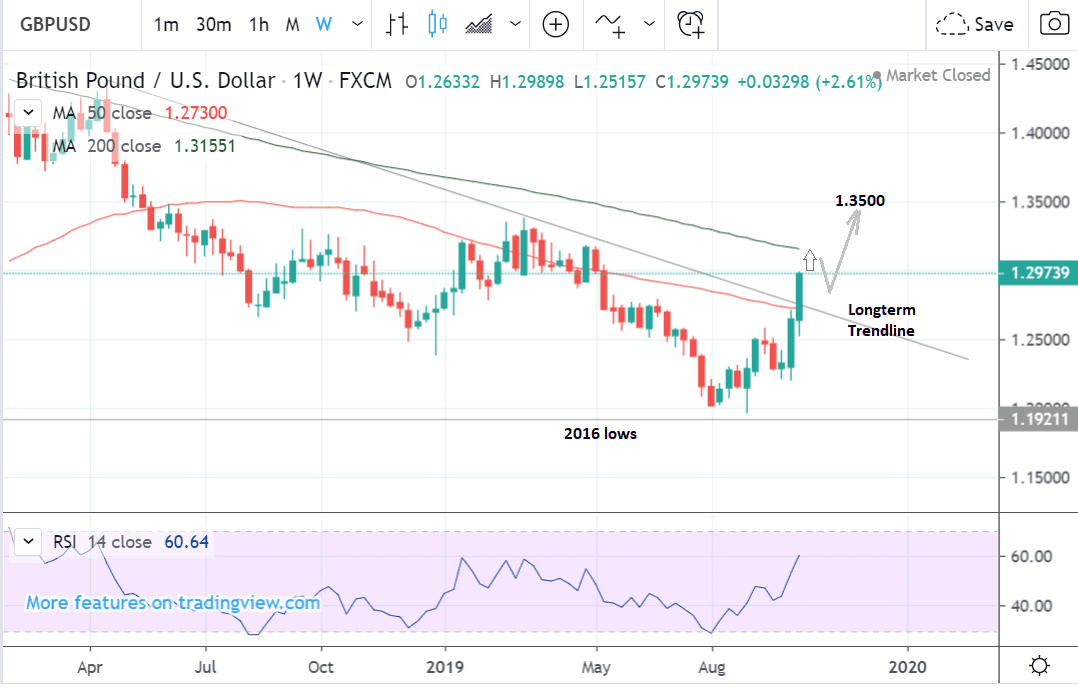 It also shows the importance of 1.3150 as a target since this is where the 200-week MA is situated which is likely to be a key obstacle in the bull’s march higher.

Yet the RSI is rising steeply which is supportive of the rally and suggests a bias to expecting further upside.

Whilst there is a high risk of a pullback at the level of the 200-week MA, the pair will probably eventually recover and resume its uptrend higher, reaching a possible, arbitrary target at 1.3500.

Pound Sterling faces another volatile week ahead, with focus on the UK Parliament where MPs will once again look to vote on a Brexit deal, the passing of which will almost certainly allow the currency to test fresh multi-month highs against the Euro.

Regardless of Bercow's decision, Tuesday sees the Withdrawal Agreement Bill brought to the House; this is the substantive legislation required to deliver Brexit. Therefore, in theory, by Tuesday Parliament will have delivered a fundamental vote on the Brexit deal.

There is one issue to be aware of: remain MPs could again seek to amend either pieces of legislation which could once again delay a vote on Brexit.

The two main releases for the U.S. Dollar in the week ahead are housing data in the form of new and existing home sales, and durable goods orders.

New and Existing home sales are forecast to slow marginally within a strongly performing market.

Conditions are benign for house buyers: mortgage rates remain at historic lows and this combined with resilient employment and wage data means housing has remained relatively immune from the slowdown in manufacturing and industrial sectors.

Although the consensus expects a more muted figure for existing sales in September, when data comes out on Tuesday at 15.00 BST, not everyone agrees.

“The effects of lower mortgage rates are becoming more noticeable in the housing market. Existing home sales beat expectations and rose 1.3% during August,” says Wells Fargo in an economic briefing to clients. “Through the monthly volatility, improved buying conditions should continue to entice buyers back into the market, and we expect existing home sales to trend higher in coming months.”

The same rationale goes for new home sales which are released on Thursday at 15.00.

“We expect the recent upshift in new home sales to continue, with new sales benefiting from many of the same tailwinds currently lifting the market for existing homes,” says Wells Fargo. “In addition, many builders have successfully shifted toward constructing more homes at lower price points, which will serve to satiate the fast-growing demand for entry-level homes and boost sales even further this year.”

Housing is said to lead the economy, so a sudden downgrade could impact the U.S. Dollar, especially coming after the negative retail sales data last week which was a warning regarding the hitherto resilient U.S. consumer.

Durable goods orders are likely to remain in the doldrums due to the close link with manufacturing and the trade war induced global slowdown.

What would be more surprising would be a recovery but that is not expected. Further weakness is likely to continue to keep up pressure on the U.S. Dollar.

Core durable goods orders, which gives a more accurate reflection of the general state of sales, is likely to show a -0.1% fall in September on a monthly basis.

“A number of factors will weigh on durable goods orders and capital spending more broadly over the coming months. Aside from Boeing’s 737 MAX issues still remaining unresolved and the strike at GM, trade uncertainty and languishing global economic growth have led to a slide in manufacturers and small businesses plans for capital spending, meaning durable goods orders should continue to struggle,” says Wells Fargo.