- Does little to change outlook, USD reaction may be unsustainable.

The Dollar arrested an earlier decline Friday after the September non-farm payrolls report revealed steady jobs growth, which helped push the unemployment rate lower and appears to have quelled market fears over the current condition of the economy.

Non-farm payrolls rose by 136k in September, down from an upwardly-revised 168k but close to the 140k that had been tipped by the Bloomberg consensus. The unemployment rate took the market by surprise when it fell from 3.7% to 3.5%, it's lowest level since December 1969, which was achieved with steady 'participation' so is not simply a statistical anomaly.

The number of job losers and those who completed temporary work fell by 306k to 2.6 mn last month while new entrants into the labour market, who've never worked before, rose 103k to 677k. But markets may question whether the new jobless rate is sustainable, especially as employers appeared to eschew pay increases for employees. Average hourly earnings growth was 0% in September when economists were looking for a 0.3% increase.

"The US labor market appears to still be on relatively healthy footing despite the downside miss on payrolls for September. The 136K jobs created was only marginally below the consensus forecast and there was a large upwards revision to the prior two months (+45K)," says Katherine Judge, an economist at CIBC Capital Markets. "Overall, these data are constructive enough to allow the Fed to skip October in our view, and cut in December."

The Dollar rose in the wake of the report after selling off earlier in the session, and having been down and out for the count through much of the current week following a series of data releases that suggested the economy could be headed for the rocks. Economists and analysts had said that markets might be more sensitive to Friday's payrolls given how other figures had stoked expectations of more aggressive rate cuts from the Federal Reserve (Fed). 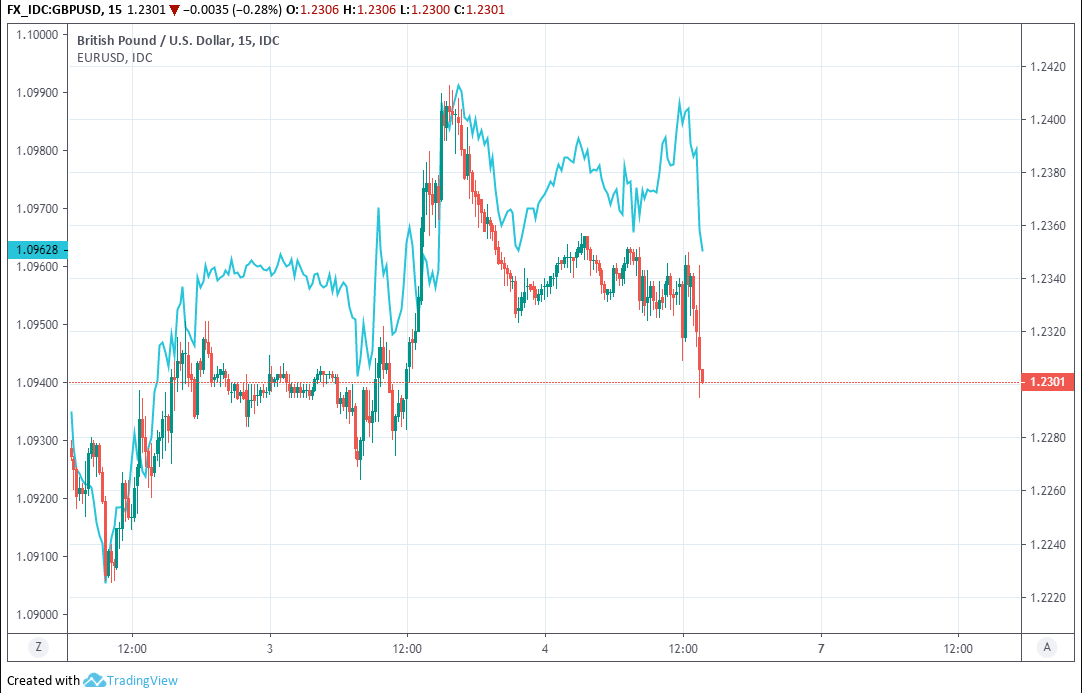 Pound Sterling quickly converted a 0% intraday change into a 0.39% loss against the Dollar following the report, leaving it trading around 1.2295, while the Euro-to-Dollar slumped from 1.0987 to 1.0968, leaving it down 0.05% on the day. The Dollar index was 0.09% higher at 98.95 following the report, after having been down by exactly the same amount heading into the release.

"Even with unemployment at such a very low level, there are still no signs that this has spurred higher wage growth. Continued wage growth is hovering around 3 per cent which supports the Fed’s view that the inflation pressure remains muted. This means that the central bank can reduce interest rates more without risk inflationary problems," says Knut Magnussen at DNB Markets.

It's not only the unemployment rate that may be unsustainable though; Friday's market reaction may be unsustainable too. The jobs report covers the same September month as the Institute of Supply Management (ISM) surveys that roiled markets earlier in the week, and investors tend to take note of those surveys because of the insights they provide about the future.

Not only that but the wages part of the data could be said to vindicate those who've said in recent months that the Fed's relatively high interest rate is unneccesary in the face of only muted inflation pressures. There is widespread disagreement over the outlook for inflation but President Donald Trump has repeatedly called on the Fed to cut rates and some economists have concurred, though not all. Others forecast inflation to rise sharply in 2020. 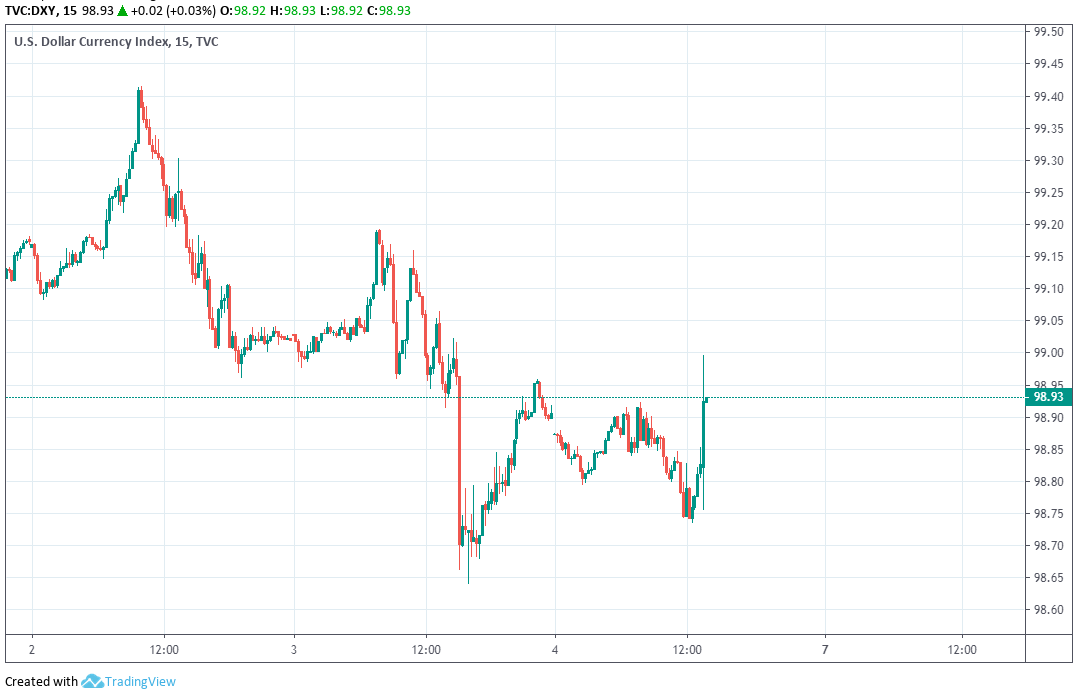 "With the headwinds from weaker global growth, trade uncertainty and the strong dollar unlikely to disappear anytime soon we are looking for payrolls to average closer to 120,000 for the rest of the year. This suggests pay growth is unlikely to accelerate markedly from here and with inflation picking up, the real wage growth story may not be as positive for spending power," says James Knigthley, chief international economist at ING.

The Dollar was floored on Tuesday this week by an ISM manufacturing PMI that fell to its lowest level for a decade and was followed Thursday by the ISM's sister survey of the services sector, which was also downbeat and led economists to believe that weakness in manufacturing is now spreading across the economy. The trade war with China is firmly in the frame for the declines.

Both surveys have placed a large question mark over, if not called time upon, the U.S. economic outperformance that enabled the Fed to raise rates four times in 2018 while the rest of the global economy stagnated and other central banks sat on their hands. That international interest rate dynamic was the main driver behind the rally that took the Dollar index to multi-year highs and many exchange rates to multi-year lows.

"All in all, it looks as though the Fed will need to step in with more policy easing to support the economy. Currently we are forecasting a December rate cut with a further rate cut in 1Q20. However, we have a lot of Fed officials scheduled to speak over coming days and any hint of a dovish shift will quickly lead us to pencil in another move on 30 October," ING's Knightley says. 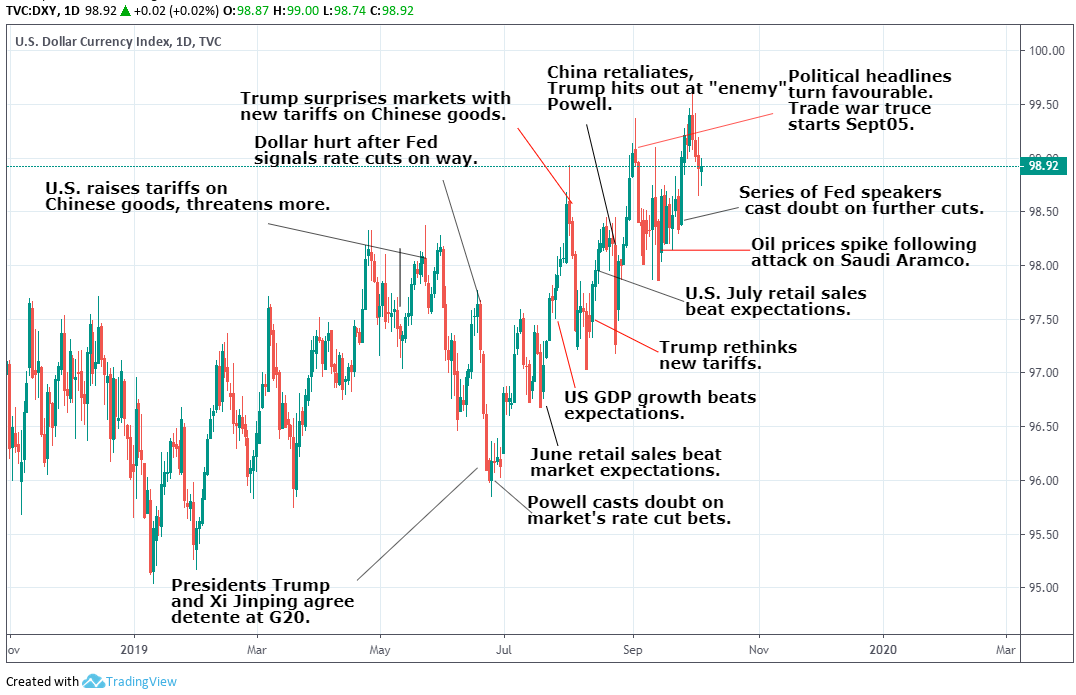 Markets only care about Friday's labour data because falling unemployment and improving job creation are thought to put upward pressure on wages. Pay growth leads to increased demand in an economy and upward pressure on inflation, which normally leads to higher interest rates and a stronger Dollar. But the opposite is also true when employment falls, pay growth dissipates and inflation declines.

The Fed has cut rates twice this year, in July and September, but signalled strongly last month that policymakers did not then see any real case for further cuts up ahead. But this week's ISM surveys and Friday's payrolls report could well change that. As things stand, financial markets are looking for at least three more rate cuts from the Fed over the coming 12 months, with the next potentially landing as soon as October 30.

"The most curious market development yesterday was the quick recovery in risk sentiment from the very weak US ISM Non-manufacturing survey," says John Hardy, chief FX strategist at Saxo Bank. "I’m holding off judgment on the narrative, but either the bounce was down to the major averages nearing key technical levels or the market wants to celebrate an accelerated Fed easing schedule that arrives with bad data."

Thursday's ISM report came late in a session that also PMI surveys for services industries disappoint right the way across Europe. It has provided economists with a strong signal that ongoing weakness in the global manufacturing industries might now be spilling over into services sectors.

Chinese growth is slowing, Europe's economy is at best stagnating, and Germany already looks to be in recession due mainly to the damaging impact of the trade war. The UK economy is also weak and at risk of recession, though tends to be viewed in isolation to others because of the ongoing Brexit saga.

"The USD outlook is increasingly pivotal as break-down levels near in a number of key pairs. Already, USDJPY has crossed below the important 107.00 level, while EURUSD and other pairs have more heavy lifting to do to suggest a more profound turn in the greenback’s fortunes," Hardy says.