- USD dowside limited ahead of key speech from Fed's Powell.

- Fed minutes seen on dovish side, but Friday is the main event.

- Markets and Trump look for hint of multiple Fed rate cuts ahead.

- ING says Fed has work cut out for it in order to weaken the USD.

The Dollar was weaker against most rivals Wednesday as investors favoured so-called risk assets, but the downside should be limited ahead of Friday's eagerly-anticipated speech from Federal Reserve (Fed) Chairman Jerome Powell, according to strategists at ING Group.

Commodity-backed currencies were in demand Wednesday and safe-havens like the Dollar on the defensive as investors searched for yield in the wake of the first German government bond auction to return a negative yield for newly issued 30-year paper. The sale of zero-coupon bonds saw the German government raise €824 million in cash, with investors paying over the odds in order to own some of the debt.

The Wall Street Journal reported that Germany's government will have to pay back just €795 million of that money, with the rest representing the premium investors are now paying in order to park cash in a place of safety. The German auction came as markets await minutes from the latest Fed policy meeting that are expected to reveal a more dovish mood on the Federal-Open-Market-Committee than was thought to be the case previously.

So Germany is paying Zero interest and is actually being paid to borrow money, while the U.S., a far stronger and more important credit, is paying interest and just stopped (I hope!) Quantitative Tightening. Strongest Dollar in History, very tough on exports. No Inflation!.....

"The minutes should shed some more light on what Powell meant with his comments that the July cut was a ‘mid-cycle adjustment’– comments that were greeted poorly by risk assets. We imagine the minutes will come across as dovish and it will be interesting to see whether we start to see any mention of the dollar here – ie, that a strong dollar is delivering a tightening of monetary conditions, or preventing easier monetary conditions coming through," says Chris Turner, head of FX strategy at ING. 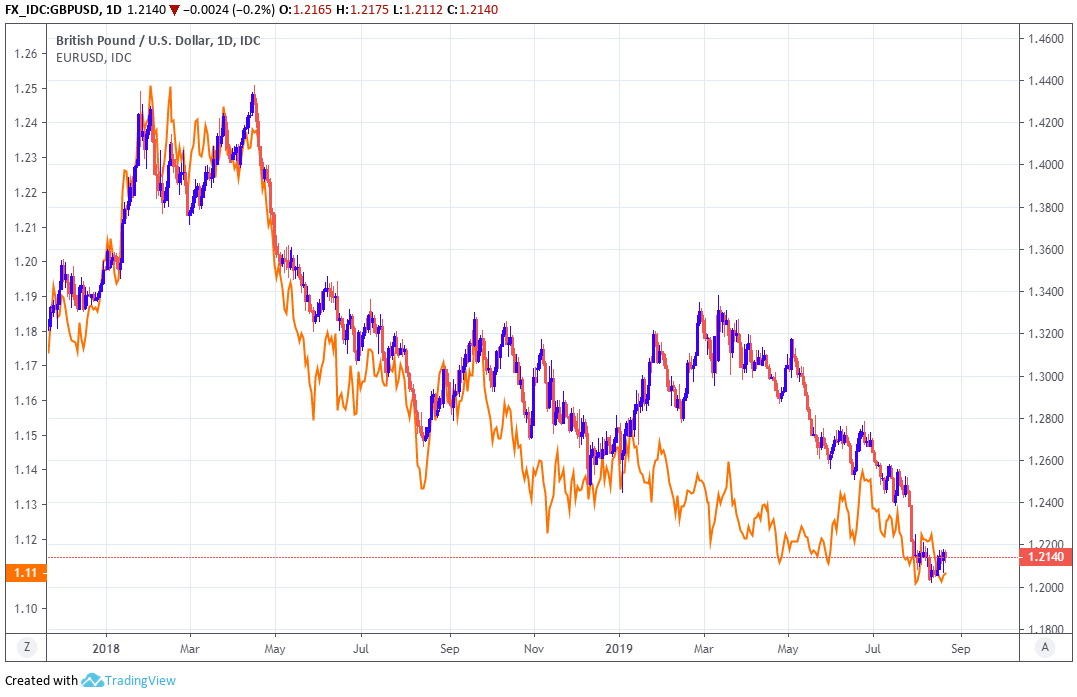 Investors, analysts and President Donald Trump are waiting with bated breath to hear if the Federal Reserve will indulge financial markets and the White House with the many more interest rate cuts they're both demanding in time for year-end, so the content and tone of Jerome Powell's Friday speech titled "Challenges for Monetary Policy" will be scrutinised keenly following its delivery during the opening ceremony of the Jackson Hold Symposium at 15:00 Friday.

Doing great with China and other Trade Deals. The only problem we have is Jay Powell and the Fed. He’s like a golfer who can’t putt, has no touch. Big U.S. growth if he does the right thing, BIG CUT - but don’t count on him! So far he has called it wrong, and only let us down....

Friday's address is the main event of the week for all financial markets because the direction of the Dollar, and most exchange rates, into year-end is hinged entirely upon whether the U.S. central bank is willing to indulge markets, or brave enough to disappoint them as well as a President who's publicly proclaimed that he has the legal authority to fire the nation's most senior banker. Whether or not he does is still a matter of contention in the market.

The Fed's four 2018 rate hikes took its cash rate to a post-crisis high of 2.5% and significantly boosted the attractiveness of U.S. government bonds in the eyes of investors, just as American economic momentum was building off the back of White House tax cuts that came into effect at the beginning of last year. That incentivised investors to sell assets in lower-yielding parts of the world like Europe and to buy Dollars instead, which is a trend that has continued even after the Fed cut rates to 2.25% last month.

.....We are competing with many countries that have a far lower interest rate, and we should be lower than them. Yesterday, “highest Dollar in U.S.History.” No inflation. Wake up Federal Reserve. Such growth potential, almost like never before! 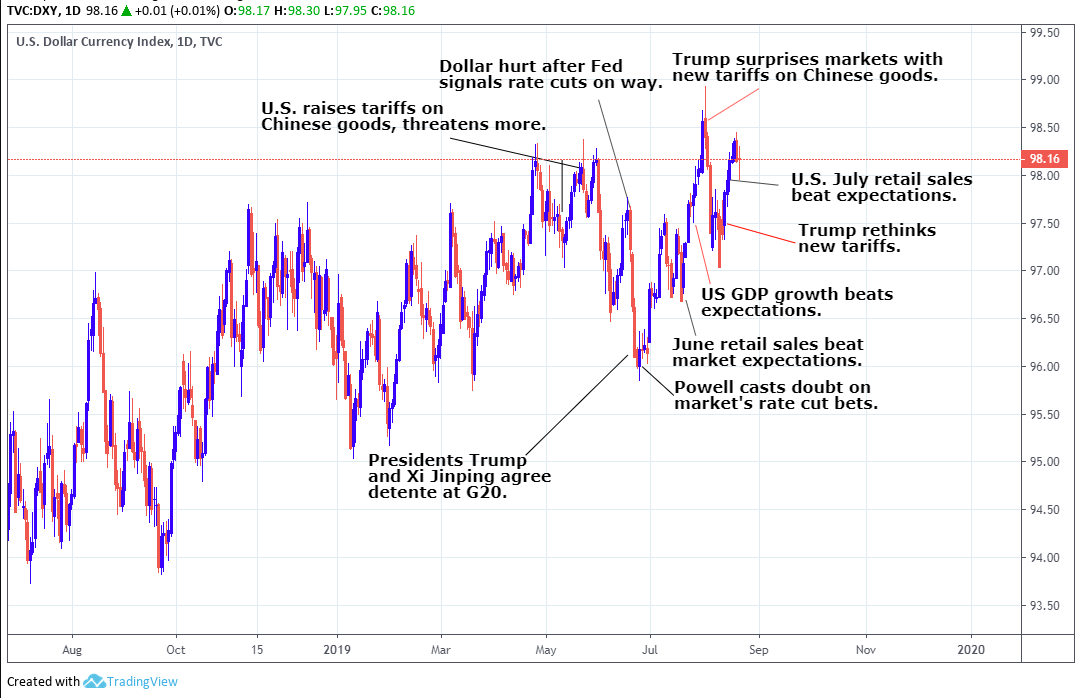 "The dollar is still very strong and the collapse in US rates has had little impact on it so far – largely because the RoW is under pressure. We would not chase the dollar higher, but equally the Fed and Washington are going to have to work very hard to get it lower. DXY to trade 98.00-98.50 range," Turner says.

The Fed says it cut rates in July due mainly to the deteriorating condition of the global economy, which has been hurt by the trade war. Fears on the Federal Open Market Committee have always been that a global downturn will eventually hurt the U.S. economy through reduced demand for products made in America, although it's constrained in the extent to which it can act by the elevated level of U.S. inflation and its statutory mandate to use interest rate policy to keep price pressures contained.

Yield curves have inverted and fears for the global economy risen ever since President Donald Trump said he intends to impose a 10% tariff on all of China's exports to the U.S. that are not yet covered by levies. Some tariffs are scheduled to go into effect on September 01 and the rest on December 15, which will mean substantially all of China's trade with the U.S. is encumbered by one tariff or another.