- CPI reverses May decline as core-inflation rises above Fed target.

- Pantheon sees CPI heading to 3% next year, placing Fed in a bind.

The Dollar rose in noon trading Tuesday after official data revealed a surprise increase in inflation for June, which could limit the extent to which the Federal Reserve (Fed) is willing to further reduce its interest rate this year.

U.S. inflation rose by 0.3% in June, which was an unchanged pace from the previous month but in line with the market consensus. This pushed the annualised rate of price growth up from 1.6% 1.8%, reversing the fall seen in the prior month of May.

Core inflation, which is seen as a truer measure of domestically generated price pressures because it ignores volatile commodity items like energy and food, also rose by 0.3% but economists had looked for it to rise by only 0.2%.

This marks the 12th month in a row that core inflation has been reported in line with, or above, the Federal Reserve's target of 2%. Although the bank's preferred measure of price pressures is the personal consumption expenditures price index, which was 1.4% in June.

"Who's afraid of inflation in the US? Not the bond market or the Fed these days, but the reality is that, judged by CPI trends rather than the one measure the central bank keys in on (core PCE), inflation isn't really that far from the central bank's target.," says Avery Shenfeld, chief economist at CIBC Capital Markets.

"Even without further tariffs, we expect core CPI inflation to hit 2.5% by the end of this year, with unfavorable base effects then likely to push it close to 3% by next spring. The three-month annualized rate now is at 2.8%, and is likely to breach 3% in August, for the first time in eight years. Under normal circumstances, this would have the Fed tightening, but the trade war has changed everything," says Ian Shepherdson, chief economist at Pantheon Macroeconomics.

Markets care about inflation because it dictates Federal Reserve interest rate policy, which has significant influence over international capital flows as well as speculative short-term trading activity. Capital flows tend to move in the direction of the most advantageous or improving returns, with lower rates normally seeing investors driven out of and deterred away from a currency while rising rates have the opposite effect.

Tuesday's data comes with financial markets betting heavily the Federal Reserve will cut its interest rate on two more occasions before the year is out in order to insure the U.S. economy against a future downturn that policymakers fear might result from the condition of the global economy and the U.S. trade war with China. The trade war has hurt economies in Europe and Asia more than it has the U.S., which has helped to support the Dollar.

"The market is rightly focused on worrying trade and global growth signals, but inflation should not be completely ignored. If trade tensions do ease there is significant scope for a market re-pricing of Federal Reserve rate cuts," says James Knightley, chief international economist at ING. 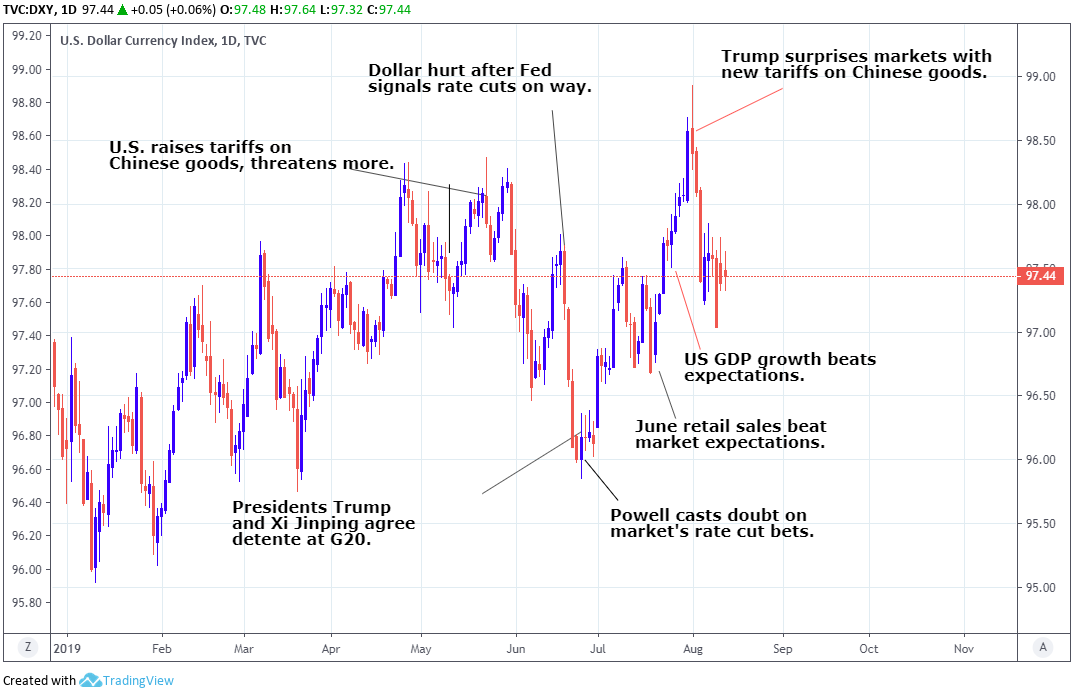 Above: Dollar Index at daily intervals.

"The CPI numbers could well drag on expectations for the Fed to imminently cut rates as aggressively as the market expects, although for now this is perhaps something we see as having an effect more on the margins," says Mark Wilson at Markets.com.

The Fed told markets at the end of last month it will "monitor the implications of incoming information for the economic outlook" while contemplating the "future path" of U.S. interest rates, after already having cut the Fed Funds rate 25 basis points to 2.25% on July 31. However, August 01 saw President Donald Trump announce that China's remaining $300 bn of untariffed annual exports to the U.S. will now be subject to levies from September 01.

Trump's August tariffs have stoked expectations of a further slowdown in the global economy, raised risks to the U.S. economic expansion and encouraged markets to bet the Fed will soon become a bit more panicked about the outlook and start to cut its interest rate more aggressively. However, China’s Vice Premier Lui He was reported to have spoken with U.S. trade representative Robert Lighthizer Tuesday, resulting in an agreement to remove some products for the list of those due to be tariffed. 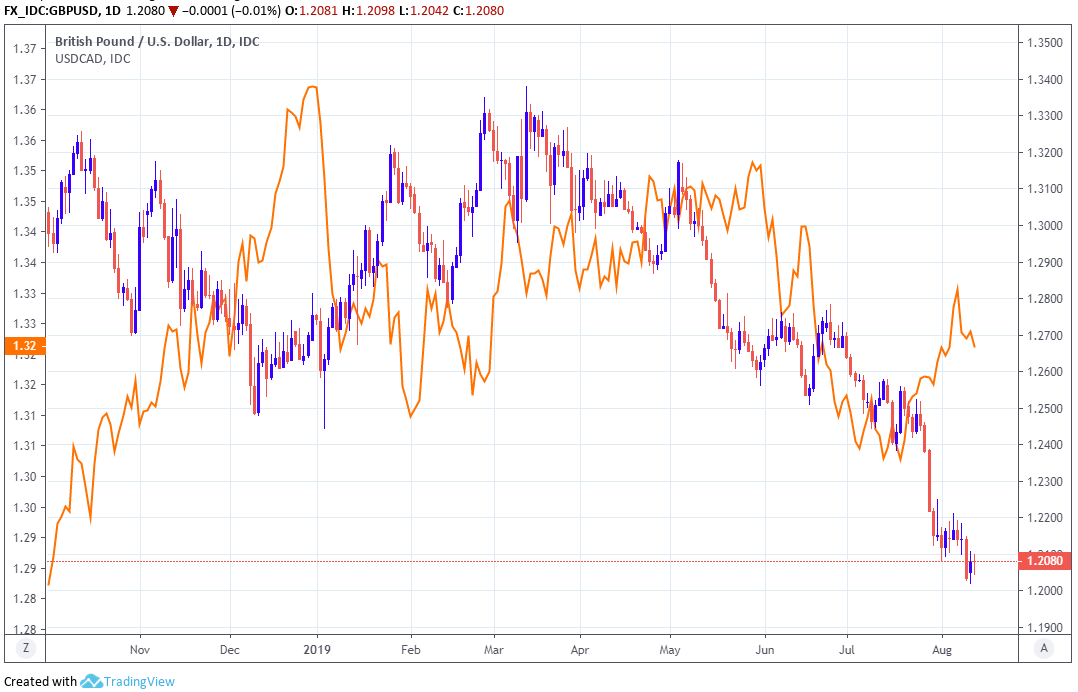 "The figures highlight the dichotomy between what is happening in on Main Street and what is going on in financial markets and with global bond yields. It’s a problem for the Fed and the reading today only makes life more complicated. The question for the market is how far does it think the Fed can shut its ears to inflation?," Wilson asks.

The Federal Reserve, which has been under pressure by President Donald Trump to cut U.S. borrowing costs in order to keep the economic expansion going, is obliged by statutory mandate to use interest rate policy to ensure inflation averages the 2% target over the medium term. And with the core consumer price index above the 2% target, further cuts could simply lead to more inflation and leave the bank in danger of failing to deliver on its mandate.

Nonetheless, pricing in the overnight-index-swap market implied on Tuesday, a December 11 Fed Funds rate of 1.52% at the midpoint of the 25 basis point range, which suggests investors see the benchmark U.S. interest rate set at 1.5%-to-1.75% by year-end. That implies financial markets are looking for another two rate cuts.

"This is understandably causing some broad USD buying now as the “Fed rate cut trade” unwinds positions here a little bit (bonds, Eurodollars, gold lower).  USDCAD, in particular, has now broken above chart resistance in the 1.3260s and is now dealing with the next level in the 1.3280s," says  Erik Bregar, head of FX strategy at Exchange Bank of Canada.