- CMC says GBP must overcome 1.2210 level for pattern to complete.

The Pound-to-Dollar rate is on the verge of a "new and stronger" uptrend that could see the bulk of Sterling's post-referendum losses ironed out, according to analysts at CMC Markets, although other firms are warning that fresh losses could blight the British currency in the weeks ahead.

Pound Sterling was on the defensive Monday after being lifted last week by speculation suggesting the UK parliament might still have some teeth it could use in order to prevent Prime Minister Boris Johnson pursuing a "no deal" Brexit on October 31, with markets and rebel MPs now coalescing around the idea of a "national unity government" that would take the reigns from the current PM in the wake of an anticipated September vote of no confidence.

Monday's weakness came as markets responded to reports of likely shortages of some important items like medicine in the wake of a 'no deal' Brexit and as investors contemplate other reports suggesting PM Johnson plans to tell EU leaders at this week's G7 summit that the UK parliament is powerless to prevent the UK leaving without formal arrangements in the Autumn. Weakness was most apparent when Sterling was stood next to other major currencies like the Japanese Yen, Swiss Franc and Dollar.

"The "W" pattern on the daily chart is an example of a double bottom formation. Although not yet complete, there are a number of characteristics that may give technical traders more confidence in the signal," says Michael McCarthy, an analyst at CMC Markets. "To complete the pattern the pair must trade up through the high at the middle of the "W" at 1.2210 (light green line). A breach of this resistance may see a new and stronger up trend in GBP/USD emerge."

Pound Sterling is more than 20% lower than it was before the likely result became clear on the night of the Brexit referendum in June 2016, after having fallen from 1.4269 that evening, although the British currency had been declining against the Dollar for around 18-months heading into the referendum after reaching highs above 1.70 in late 2014. A 2015 general election and associated policies, not to mention changes in the international environment, soon saw those 2014 gains unwind.

CMC Markets says the Pound-Dollar rate charts are indicating potential for "a significant move higher" but fellow technical analysts at Commerzbank say Sterling will remain under pressure unless the exchange rate can rise above the 1.2347 level. Although Commerzbank also says the Pound-Dollar rate will still have its work cut out for it even after that point and that a much greater increase will be needed to mark the end of the downtrend that's dragged the British unit lower for the last three years.

"It stays negative while contained by its 3 month downtrend at 1.2347 today. Only above the downtrend this would introduce scope to the 55 day ma at 1.2454 and the June high at 1.2784," says Karen Jones, head of technical analysis at Commerzbank. "Only a rise above the June high at 1.2784 would indicate that a bottom is being formed (not favoured)." 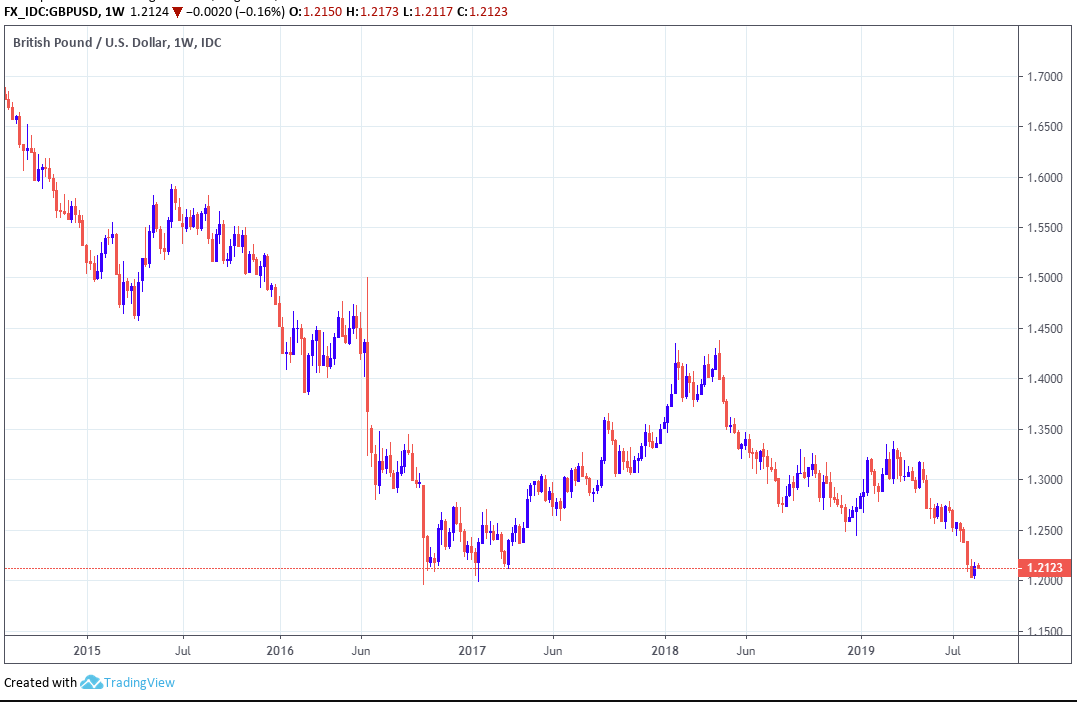 Above: Pound-to-Dollar rate shown at weekly intervals, with post-referendum collapse.

"The pound appears to be drawing some temporary relief from building speculation that Boris Johnson’s government could face an imminent vote of no confidence as soon as parliament returns from their summer holidays," says Lee Hardman, an analyst at MUFG. "Labour leader Jeremy Corbyn is expected to announce today that he will do “everything necessary” to avoid a No Deal Brexit on the 31st October as well as setting out his electoral platform ahead of a potential general election later this year."

Financial markets regard leaving the EU as a step into the unknown that, somewhat paradoxically, will lead to slower economic growth and lower interest rates over the longer-term. Many investors, analysts and political actors also say the short-term effects could be acute, with new processes at ports and a shortage of warehouse spaces  seen leading to scarce supply of some items including medicines and food stuffs.

The Bank of England (BoE) claims its likely response to a 'no deal' Brexit is not set in stone but most analysts say the BoE would be most likely to cut its interest rate after such a departure, in very much the same way as it did following the referendum.

The BoE cut Bank Rate to a new record low in August 2016 based upon dire signals given off by IHS Markit PMI surveys, although it then transpired those radically overstated the impact of the vote. The bank has been saying for a while now it thinks UK interest rates should be lifted in order to prevent

"We continue to believe that recent pound gains are built on shaky foundations with risks still skewed to the downside in the coming months. Pound volatility is expected to remain elevated," Hardman says. "Corbyn has already stated that he would attempt to form a temporary government with other opposition MPs in order to request an extension to Article 50. However, it remains unclear whether the proposed action will prove effective at preventing a No Deal Brexit."