The Dollar was buoyed Tuesday by a bipartisan agreement to defer a clash over the U.S. debt ceiling until after the next Presidential election although investor appetite for the greenback will tested on Thursday and Friday when the European Central Bank (ECB) interest rate decision is announced and second-quarter growth data is released.

Republican and Democratic Party leaders struck a deal late Monday to fund the U.S. government for a further two years, which means there'll be Autumn clash over the so-called debt ceiling this year and no repeat of the furlough that closed the government back in January.

The agreement removes one source of uncertainty from the Dollar's radar and will enable U.S. politicians to work on more pressing issues such as the trade talks with China and events in the Gulf, where tensions are rising between the West and Iran.

I am pleased to announce that a deal has been struck with Senate Majority Leader Mitch McConnell, Senate Minority Leader Chuck Schumer, Speaker of the House Nancy Pelosi, and House Minority Leader Kevin McCarthy - on a two-year Budget and Debt Ceiling, with no poison pills....

"The budget parameters of the deal contain somewhat more stimulus than had been expected," says Hans Redeker, head of FX strategy at Morgan Stanley. "Over the past three days, the DXY has rebounded from its 200-day moving-average. The debt ceiling agreement suggests that the USD correction may extend for a few more days, putting EURUSD’s 1.1185 support under pressure. The likelihood of breaking this level has increased, but we would not expect it to break below the June 1.1110 low." 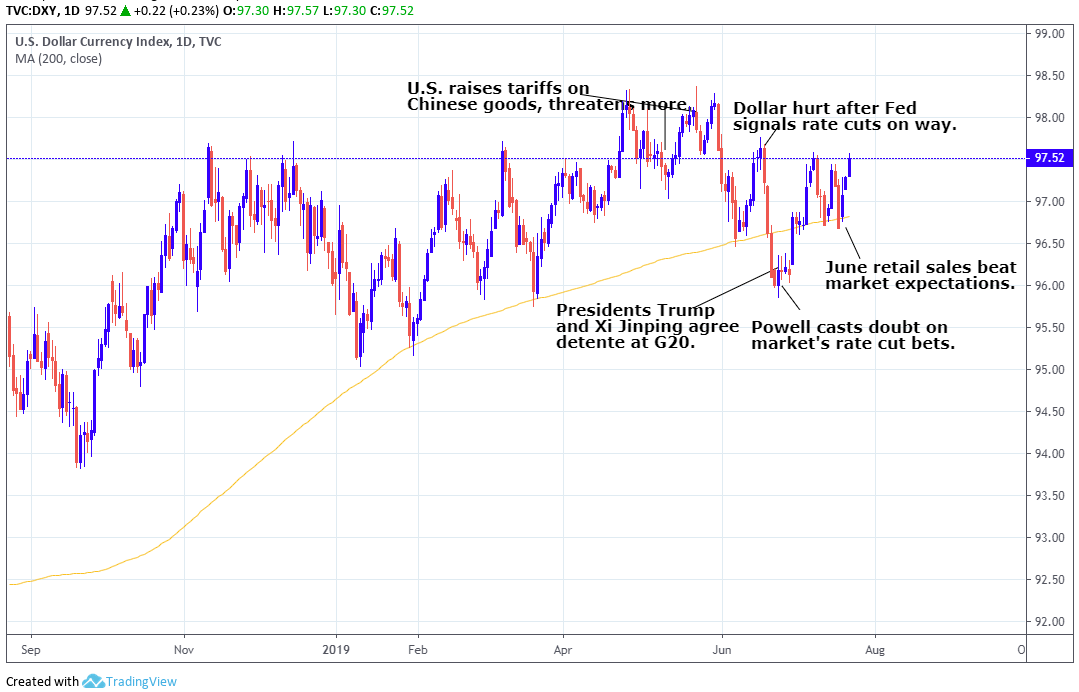 Monday's deal on the debt ceiling contains provisions for around $75 bn of additional spending for 2019 that had not been anticipated by markets and an extra $100 bn for 2020, which will lend support to the economy at a time when it is widely expected to slow.

It will also see the Treasury begin to issue new debt to rebuild its depleted cash balances, which Morgan Stanley says will support the Dollar by withdrawing liquidity from the market. However, the outlook for the greenback will change for the better or worse on Thursday and Friday following the July ECB announcement and GDP data.

The ECB is now widely expected to provide further support to the struggling Eurozone economy in the coming months, with the only questions remaining being those of when the bank will make its announcement and exactly what policy support it'll provide.

"Ahead of the Fed meeting next week, where a 50bp rate cut remains on the table, EURUSD may see only limited downside of within 0.5% on the day. What could cause EUR to retest 1.11 or lower would be a 20bp rate cut and/or announcement that QE would restart before November," Redeker writes, in a note to clients Tuesday. 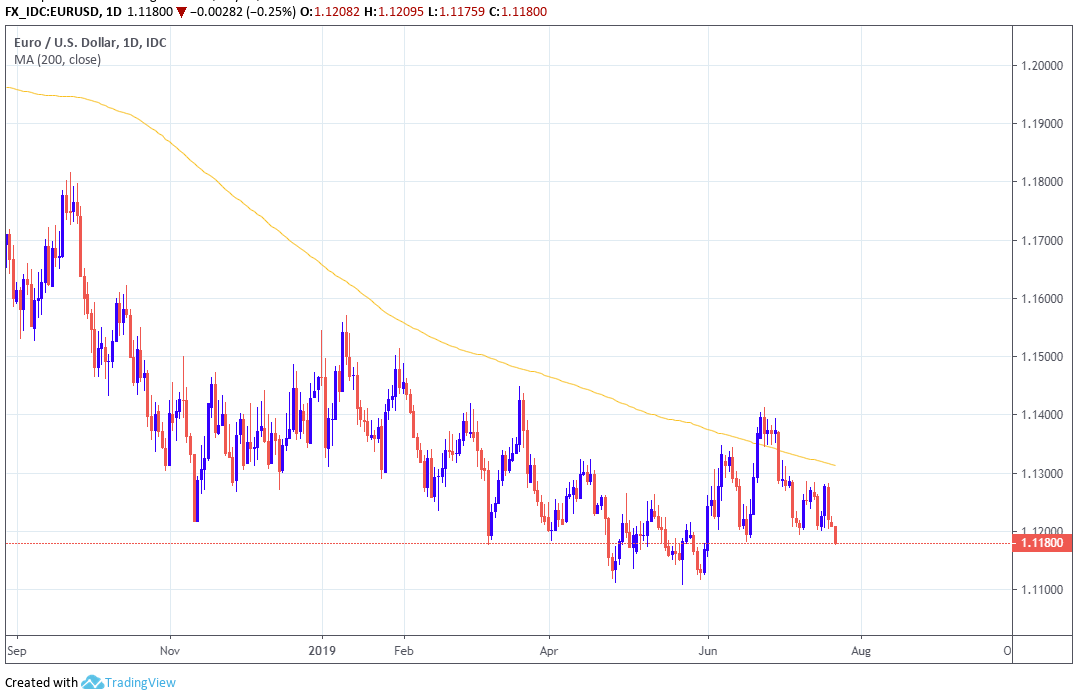 ECB stimulus is expected at a time when markets are also betting the Federal Reserve (Fed) will cut its interest rate steeply over the coming months, and the combination of the two is creating uncertainty about the outlook for both currencies. However, the ECB is also seen as having less scope to cut rates than the Fed, which is why markets are biased in favour of the Euro as the likely winner of any tussle with the Dollar. Although disinflationary strength in the Euro is probably not what the ECB wants to see.

The ECB will announce its latest interest rate decision at 12:00 London time Thursday and will follow up with a press conference during which any policy measures will be explained in further detail. U.S. GDP data for the second quarter will be released at 13:30 on Friday and could impact the outlook for the Federal Reserve.

"Ultimately, we think the ECB would prefer the next phase of easing to be more heavily weighted towards QE as opposed to rate cuts due to the damaging impact of the latter," says Stephen Gallo, European head of FX strategy at BMO Capital Markets. "We wouldn't be incredibly surprised to see the ECB try and drag things out by remaining on hold this week. Either way, we will remain sellers of EURUSD and look to fade any instances of EURUSD strength." 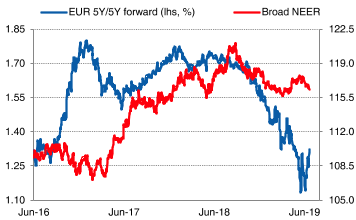 The Federal Reserve raised its interest rate four times in 2018 as the U.S. economy expanded at an increased pace, aided by White House tax cuts, and inflation rose above the 2% target. It has now lifted rates nine times since the end of 2015 but inflation has recently fallen below the target and growth is now expected to slow as global growth decelerates in response to the White House trade war with China.

Friday's GDP data will reveal whether markets are right to have worried about the state of the U.S. economy in recent months, or if they've gone too far worrying about nothing. So far official data has revealed only that the economy gathered steam in the opening quarter, for the first time in five years, but that the industrial sector has struggled amid a litany of other trade skirmishes including the June confrontation with Mexico over management of the southern border.

If the U.S. GDP data shows the economy continuing to putter along at a steady pace then financial markets could be forced to revise their expectations of the Federal Reserve in favour of a lesser number of interest rate cuts being delivered over the coming months, which would be positive for the Dollar and negative for Pound Sterling and the Euro. 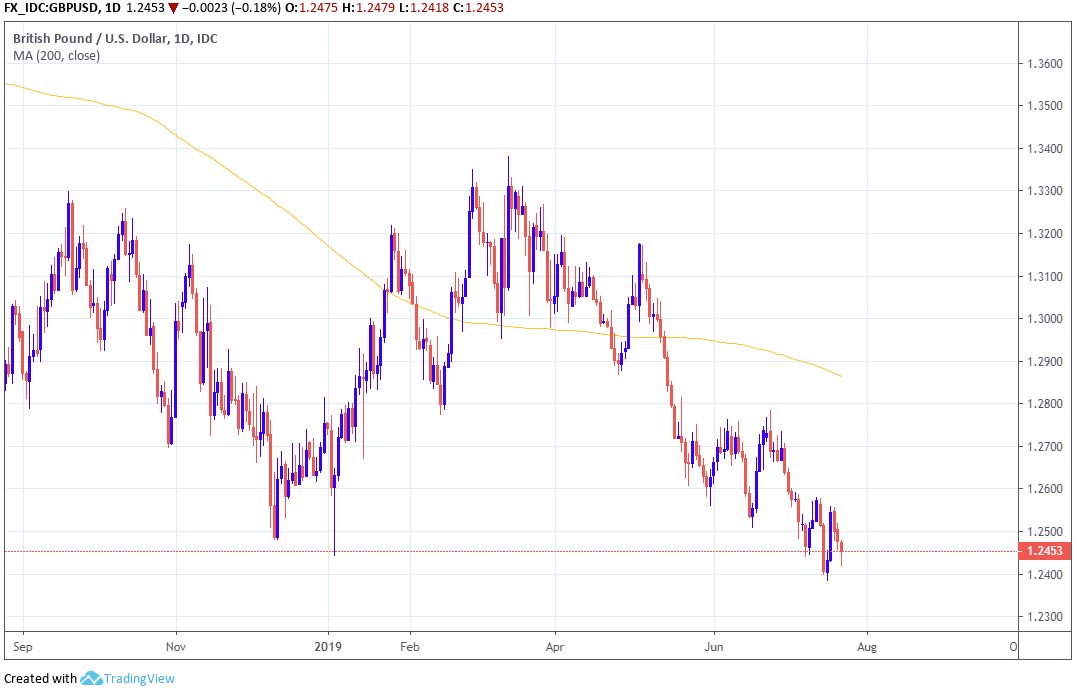