- USD roars back after consumer defies economy's doubters in June.

The Dollar roared into life Tuesday, building on a positive start to the week and forcing a Brexit-stricken Pound to a two-year low, after strong retail sales data prompted some in the market to contemplate whether a second anticipated Federal Reserve (Fed) interest rate cut is really a done deal for September.

U.S. retail sales rose by 0.4% in June, equal to the downwardly-revised increase seen previously, when consensus had looked for only a 0.1% gain. Core retail sales, which remove large-ticket car sales from the numbers because of their distorting impact on underlying trends, also advanced by an unchanged 0.4%.

Tuesday's data came at a time when financial markets were betting the house the Federal Reserve will cut its interest rate from 2.5% to 2.25% this month before slashing it to 2% in September due to fears over the impact a global slowdown will have on the U.S. economy. Markets are also looking for a third rate cut in 2020.

However, those wagers were under newfound scrutiny in noon trading Wednesday. The financial community has rapidly and resoundingly come to see a significant shift in Fed policy being afoot in recent months, but official data has so-far revealed only that the economy gathered steam in the opening quarter.

Second quarter data due out in August will reveal what happened to the economy after its strong start although some economists, including those who've been relatively optimistic in their outlook for the U.S., are already adjusting their forecasts as a result of Tuesday's figures.

"The level of total consumption spending in both April and May will be revised up, so Q2 consumption likely rose at an annualized rate of 4% or more. Expect upward revisions to all the GDP tracking models as a result," says Ian Shepherdson, chief U.S. economist at Pantheon Macroeconomics. "These data won’t stop the Fed easing on the 31st, though for the record we remain firmly of the view that the economy does not need lower rates."

Shepherdson says the Fed will likely still go ahead with 50 basis points worth of rate cuts this year but calls them unnecessary. Others say the Fed may not go the full distance the market is anticipating but that the economy will slow in the second half of the year.

"It would still be a shock if the Fed didn’t follow through with a 25bp rate cut later this month, but lingering market expectations of a 50bp move look well wide of the mark," says Andrew Hunter at Capital Economics. "We still expect a much sharper slowdown in economic growth over the second half of the year, prompting the Fed to cut rates by a cumulate 75bp by early next year. But the strength of both retail sales and employment growth in June illustrates that those rate cuts aren’t yet a done deal." 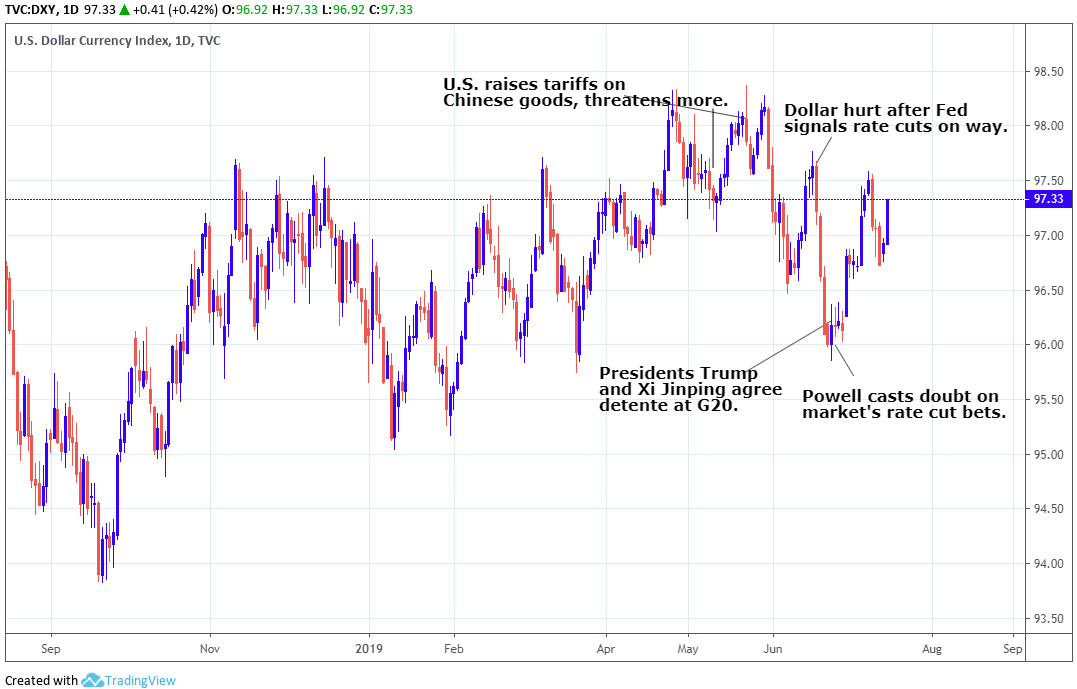 Above: Dollar Index at daily intervals. Annotated for recent events.

Currency markets care about changes in interest rates, as well as the outlook for them, can have a significant influence over international capital flows as well as speculative short-term trading activity.

"While fundamentals point to vulnerabilities, we would not be surprised to find the USD sticky for a bit longer. The USD premium has been priced out across major G7 pairs, yet spot markets have not been as cooperative - unlike the 2017 case. The carry advantage is slowly eroding but remains far from an abrupt collapse," says Mazen Issa, a strategist at TD Securities. 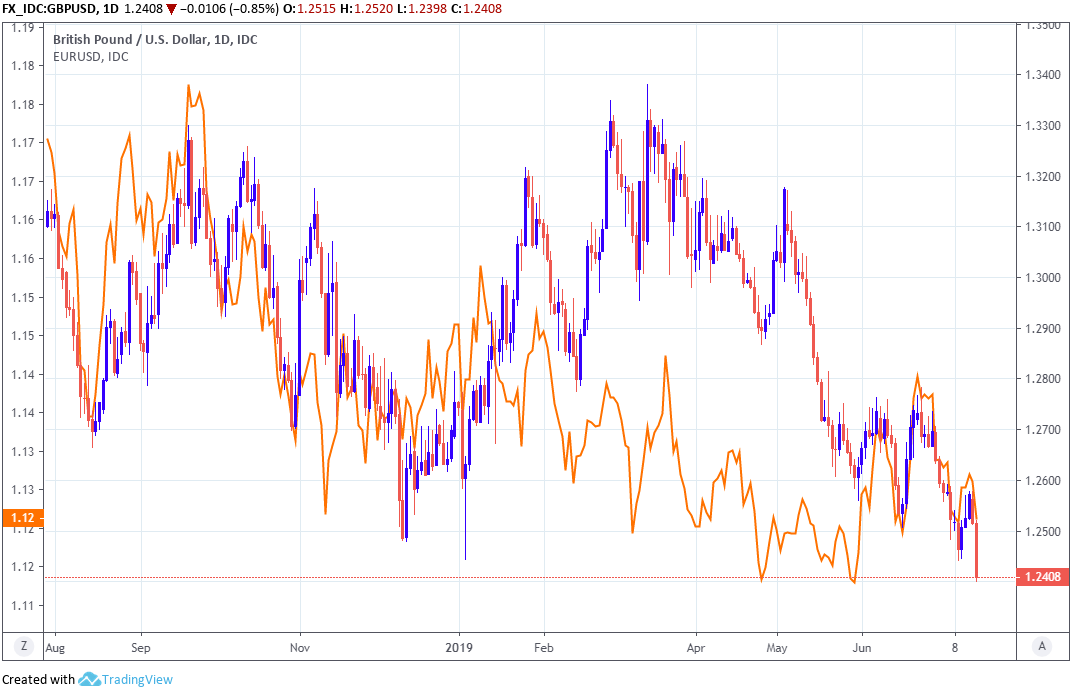 Some surveys have suggested the manufacturing sector is creaking under stress from the trade war with China, with U.S. firms contending not only with the cost of President Trump's import tariffs but also a deterioration of the global economy that is threatening domestic and international demand.

Official data did confirm Tuesday that U.S. industrial firms struggled again in the recent quarter. Industrial production fell 1.2% when output is compared with the same period one year before, marking a second consecutive fall that means the industrial sector is now in recession.

"That’s not news; it’s a consequence of China’s cyclical slowdown and the trade war," says Pantheon's Shepherdson. "We expect another tough quarter in Q3, but by Q4 we think a trade deal will have been done and China’s economy will be turning up. To cut rates now because of the recent weakness of manufacturing is a mistake, in our view."

Those few figures could yet portend a problematic turn for the U.S. economy but for Sterling, those Fed rate cuts are under scrutiny at the wrong time because the rug was already being pulled from beneath the British currency Tuesday.

The October 31 expiry of the current Article 50 negotiating period is drawing closer and both candidates to replace outgoing Prime Minister Theresa May are claiming that they'll use the threat of a 'no deal' Brexit to gain changes to the EU withdrawal agreement that Brussels already claims it won't countenance.

Bookmakers' favourite, former foreign secretary Boris Johnson, has committed to leaving the EU whatever the weather in Westminster and Brussels on October 31, whether the EU relents on the so-called Northern Irish backstop or not. This means a 'no deal' Brexit if the EU sticks to its guns.

"The tougher stance from both Boris Johnson and Jeremy Hunt in terms of their rhetoric on Brexit is clearly weighing on the pound," says Neil Wilson at Markets.com. "A breach below 1.24 could easily bring April 2017 lows at 1.2360 into view where there could be some support, but you’d worry this could push cable back down to the 1.21 region, the 2017 ex-flash crash lows."