Above: The U.S. Fed's Powell says the Fed can be patient on raising interest rates, slowing inflation backs this view. Image © Federal Reserve

- USD on back foot as inflation data fosters patience at Fed.

The Dollar fell to fresh lows Friday following the commentary from the Federal Reserve (Fed) and after inflation data voiced support for the bank's new narrative that it can afford to be "patient" before hiking interest rates again.

Inflation fell by -0.1% for the December month, which was in line with market expectations but enough to pull the annual rate of price growth down to 1.9%, from 2% previously.

"The Dollar stayed in the red after a gauge of U.S inflation moderated in line with forecasts, evidence of muted prices that suggest the Fed would leave rates steady over the foreseeable future," says Joe Manimbo, a foreign exchange analyst with Western Union.

Core inflation rose by 0.2%, also in line with consensus, which kept the annual rate steady at an above-target 2.2%. That measure removes volatile commodity items from the goods basket so is seen as a more reliable measure of domestically generated inflation pressures.

Weaker inflation in December was the result of a 30% decline in the price of oil during the prior two months, which drove U.S. gasoline prices 7.5% lower for December, hence why core inflation is now higher than the "headline" rate.

"With little indication here that the acceleration in wage pressures or tariffs are causing any pickup in inflation, the Fed can take a pause in Q1 on raising rates to assess the health of growth indicators. As such, we continue to expect only one hike in 2019, materializing in Q2," says Katherine Judge, an economist at CIBC Capital Markets.

Markets care about the data because it is inflation that central banks are attempting to manipulate by moving interest rates and interest rates moves in turn impact currency markets.

The general rule-of-thumb is expectations for higher interest rates are supportive of a currency. The opposite is true when a central bank hits the pause button or looks to enter a cycle of interest rate cuts.

Fed Chairman Jerome Powell said late Thursday that the Federal Open Market Committee (FOMC) can afford to be "patient" before raising U.S. rates again, when addressing an audience at the Economic Club of Washington D.C.

He, and other FOMC members including Atlanta Fed CEO Raphael Bostic, have been out in force on the speakers' circuit this week communicating and clarifying the Fed's latest views on the U.S. and global economies.

FOMC members used the Fed's dot-plot and December's interest rate statement to tell markets last month they see themselves raising rates at a slower pace and in a much more cautious manner this year. 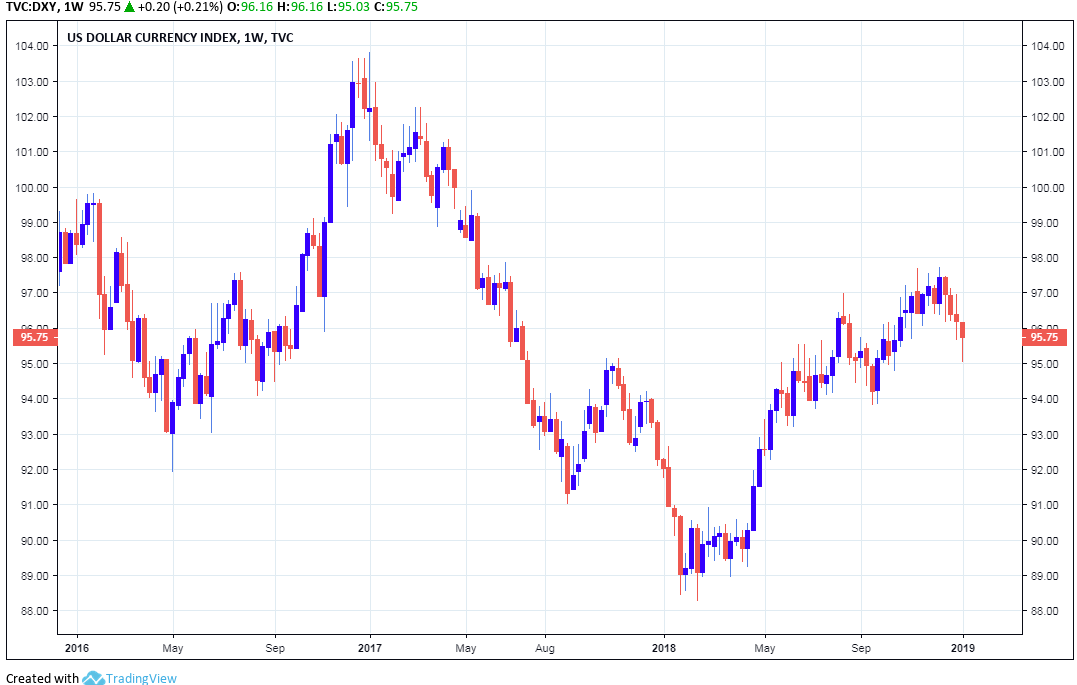 "EURUSD is having its turn; while growth and capital flow has been elusive, the topside break of 1.15 is likely to exacerbate a position-induced squeeze on stale EUR shorts," says Mark McCormick, North American head of FX strategy at TD Securities. "1.1630 should mark key resistance." 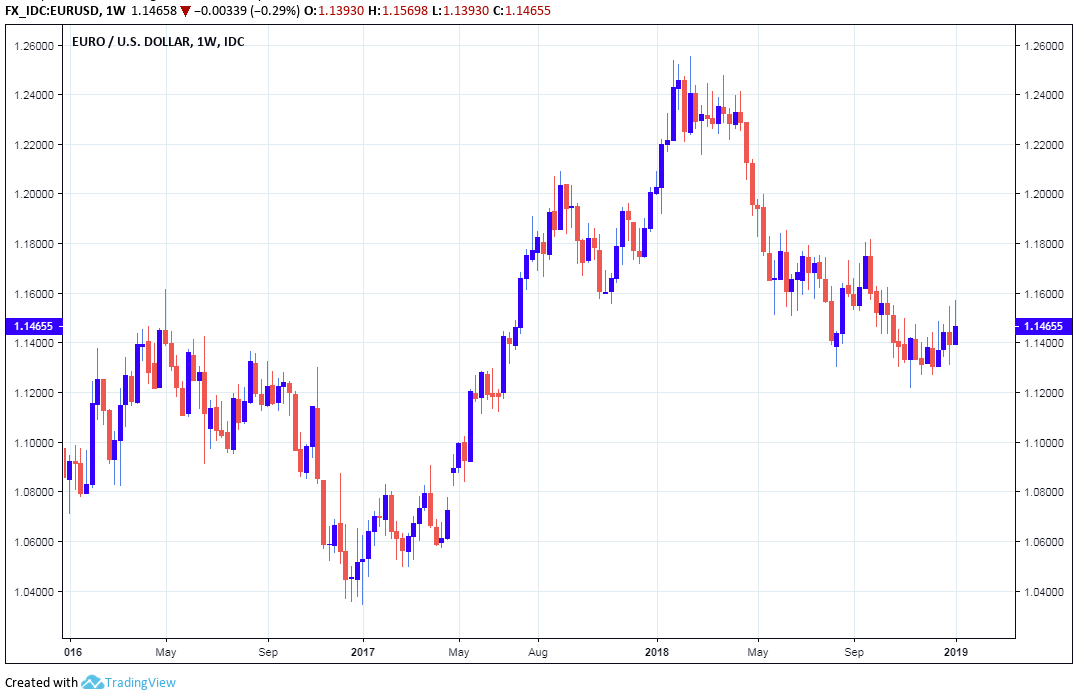 The Fed hiked rates four times in 2018, taking the Federal Funds rate range up to between 2.25% and 2.5%. Markets had previously thought it'd hike three times this year, only after December's policy statement they're now betting it doesn't raise rates at all.

On Thursday Powell explained the reason for this change of heart, saying; "The US economy is solid...the principal worry I would have is global growth”. Both Chinese and Eurozone economies have slowed sharply in recent quarters while some financial markets have been very volatile.

"The market is now flirting with the possibility of an interest rate cut by the Fed during 2019, apparently confident that the tightening cycle is over," says Daragh Maher, head of U.S. FX strategy at HSBC. "It is tempting to look for an extension weaker but we have our doubts that a bearish USD trade will remain the best tactic for the coming month."

Dire data is still coming in thick and fast, particularly from Europe. Recent data has shown industrial output contracting in Germany, France and Italy during November and economists are increasingly downgrading their growth forecasts for the bloc this year. China has been no exception.

The White House's trade war with China has been the main driver behind the deteriorating global economic outlook, although domestic politics and earlie changes in oil prices have also been at play.

Fed policymakers now fear that this slowdown will soon come back to haunt the U.S. economy in the form of weaker demand from the external sector. That would crimp U.S. demand and underline the outlook for inflation, or so the Fed says, but not everybody is buying it.

"With the broad swathe of US data still consistent with above-trend growth alongside a tight labor market with accelerating wage growth, a data-dependent Fed may yet be tempted to deliver higher rates," says Maher. "The financial stability fostered by the Fed’s reassurances on the pace of tightening and balance sheet management may, ironically, allow policymakers to hike again."

The currency team at HSBC have held a bullish view on the U.S. Dollar for a while now. They said this week that the Fed could still raise its interest rate this year and that, even if the global economy slows and the Fed doesn't hike, the currency could still push higher because it is a safe haven during times of uncertainty.

"Simply put, if the reassurances offered in Powell’s rhetoric stabilize markets and the economic data remains robust, then the market looks rather under-priced for the risk the Fed may have a hike or two more to deliver. The risks are skewed to USD upside," Maher writes, in a note to clients.