- Fed may switch from hiking to cutting in 2019

- The impact on the Dollar would be disastrous

A major risk for the US Dollar in 2019 is the Federal Reserve (Fed) abandoning its policy of raising interest rates, a policy widely acknowledged as a driver of multi-year Dollar strength.

History shows a short lag time between market turns and a sort of ‘Jekyll and Hyde’ effect, as the Fed suddenly switches from raising to cutting rates, says the economist.

Rosenberg says that statistically speaking, the Federal Reserve tends to switch from a tightening bias (raising rates) to an easing bias (lower rates) in only a matter of months, and that this is could be a real threat in 2019.

“When I tell people the Fed will be easing monetary policy in coming months, the view is met with derisions of laughter. But it is not a laughing matter,” says Rosenberg. “These folks who sneer and shake their head just because of what the central bank is saying today are not students of history.”

The Fed is currently maintaining a tightening bias, albeit slightly looser than the bias it held a few months back.

Yet the past shows that since 1995 whenever the Fed has turned from ‘hawk’ (tightener) into ‘dove’ (easer) it has done so extremely rapidly, in only a matter of a few months.

“The Fed is predictably slow to see the turning points” he says. “But when policymakers see the turn, the shift in policy comes quickly and often spectacularly.”

The Fed turned from hawk to dove rapidly between March-July in 1995, between June and September in 1998, between November 2000 to January 2001 and, finally, during the whirlwind events around the financial crisis when the Fed went from worrying about inflation in August 2007 to a dramatic 50 basis point - half a percentage point - cut in September.

The sudden switch in policy, if enacted, would carry extremely bearish connotations for the US Dollar which has rallied strongly on rising interest rates since the Fed started hiking in 2015.

The market has reduced its rate hike expectations for 2019 from expecting several hikes previously to now not expecting any, however, it has so far held back from adopting Rosenberg’s view that the Fed could cut rates.

Base interest rates are currently 2.5%. Traders in the Fed funds futures market are indicating just a 14.1% chance of one or more rate hikes before January 2020, according to the CME Group’s Fedwatch tool. 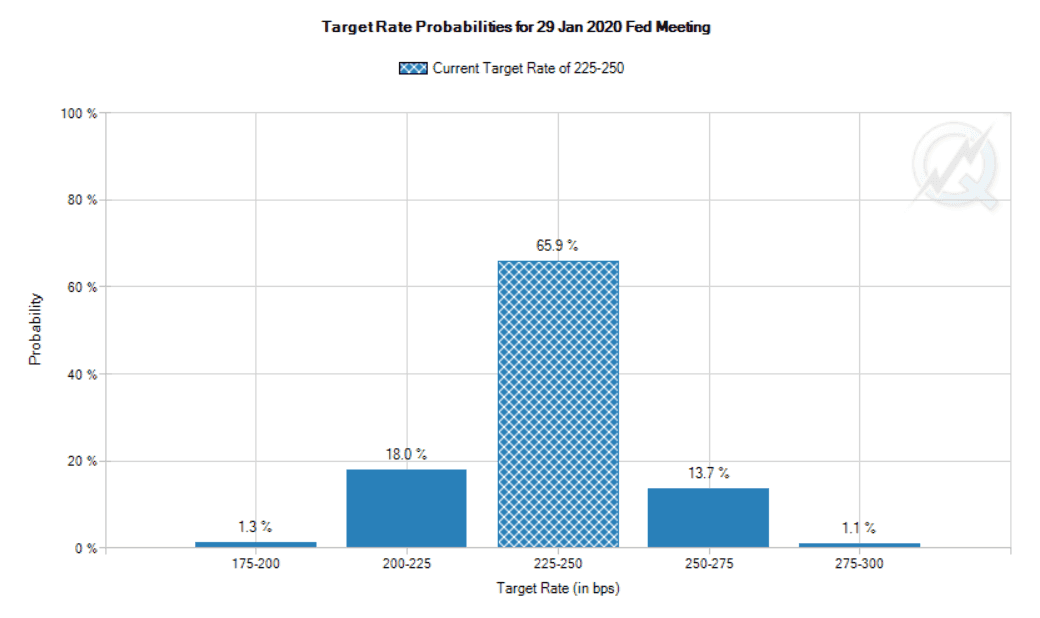