- It is now entering a protracted bear market

The Dow Jones industrial average recently topped at 26951 at the October 3 highs before falling dramatically to a current level of 25009.

According to Glynn, the index has now entered a steep, long-term, bear market, which will probably last several years and take the Dow all the way back down to the 15000-18000 region where it was in 2015.

The forecast is based on an analysis of the market using Elliot waves which rationalise price action into 5 and 3 wave repeating patterns of buying and selling.

The diagram below illustrates an idealised Elliot wave cycle. According to Elliot markets have a tendency to rise in 5-wave moves and then correct back in 3-wave counter-trend moves. 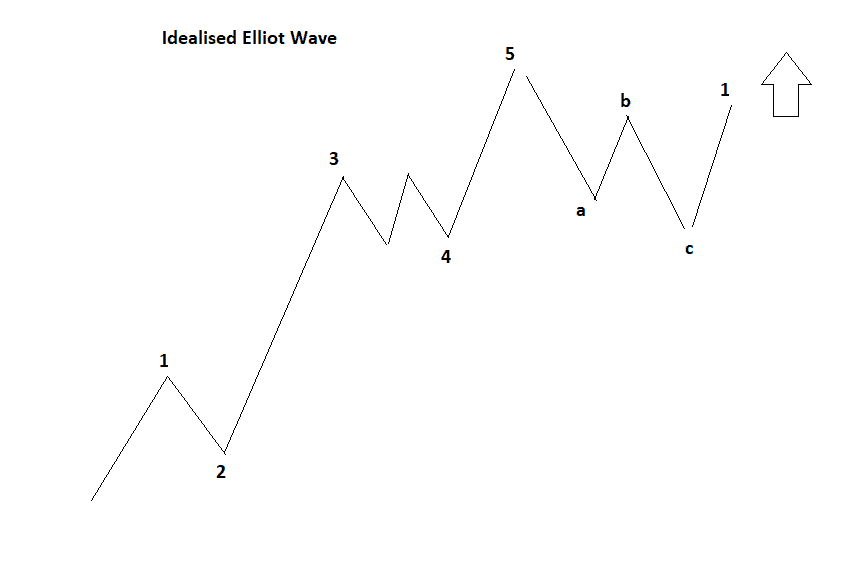 Elliot waves are also fractal which means they fit into each other infinitely. Each 5-wave pattern is composed of 5 smaller 5 wave patterns and is one of 5 waves which are part of a larger 5, a bit like a set of Russian Dolls of infinite size.

The top reached by the Dow on October 3 is significant because it is the top of a very large wave [5] which started back down at the 2009 lows following the financial crisis.

Within that large-scale wave [5] another smaller 5-wave pattern has also completed its 5th wave higher (5), and within that wave an even smaller wave 5 has also probably finished. This suggests a top of some significance has formed.

A downside target for the market can be estimated using a guideline of Elliot theory that says when markets correct from a significant high they usually fall to a target within the 4th wave of the wave of one degree smaller. This would suggest a target within the range of (4), which is between 15000 and 18000 on the chart above.

If the analysis is correct financial markets are in for a rocky ride but how will this affect currencies?

Glynn is actually bullish the U.S. Dollar during the stock market bear.

"As for the USD: I am bullish on the USD for the coming bear market period,  which is likely the next 3yrs or so."

The fundamental catalyst for the stock market crash will be a huge contraction of credit which will "cause a type of short squeeze on the USD," says Glynn.

Yet historically the relationship between the Dow and US Dollar is more usually positive than inverted.

This suggests the Dollar could fall a third as much as the stock market. If the Dow falls to 18000 it will represent a 33% reduction from its 26951 highs. This would probably then translate into a circa 10% fall for the US Dollar.

The reason for the correlation between stocks and the US Dollar is probably foreign ownership.

When stocks rally more foreign investors tend to want a piece of the American pie and this increases demand for US Dollars to buy US stocks. When US stocks fall, however, the opposite happens and investors sell the stock market and repatriate their cash, exchanging Dollar for their currency in the process.

Rise of the Safe-Havens

'Safe-haven' currencies tend to appreciate on the back of international crises. The current bear market underway in stocks is likely to cause another financial crisis, according to Glynn which should, therefore, help safe-havens.

"If I am correct this time, then we can kiss goodbye to not only the bull market but also world economic expansion," says Glynn. "And this time there is no government backstop left to tap into. The banking system is going to go down hard, so will government revenues."

In this scenario, we would expect traditional safe-havens such as gold, the Swiss Franc and the Yen to rise as investors either repatriate their money out of riskier ventures or actively invest in safety.

The outlook for Sterling is less certain. Sometimes it acts as a mild safe-haven itself, however, this time the crisis will be happening in the midst of Brexit talks, and the uncertainty associated with that is unlikely to make it conducive to investors seeking a safe-house from the 'gathering storm'.

If the bear wave continues falling at the current momentum, it will probably be reaching its point of steepest decline at about the time of the official withdrawal deadline next March.

Against the backdrop of a global financial crisis, hard-line Brexiteers might grow more cautious about the UK completely cutting ties with its EU neighbours and going it alone.

This might actually increase the chances of a soft deal being agreed. In such a scenario the Pound would be forecast to rise as it discounts the risk premium it has been carrying in case of a hard Brexit.