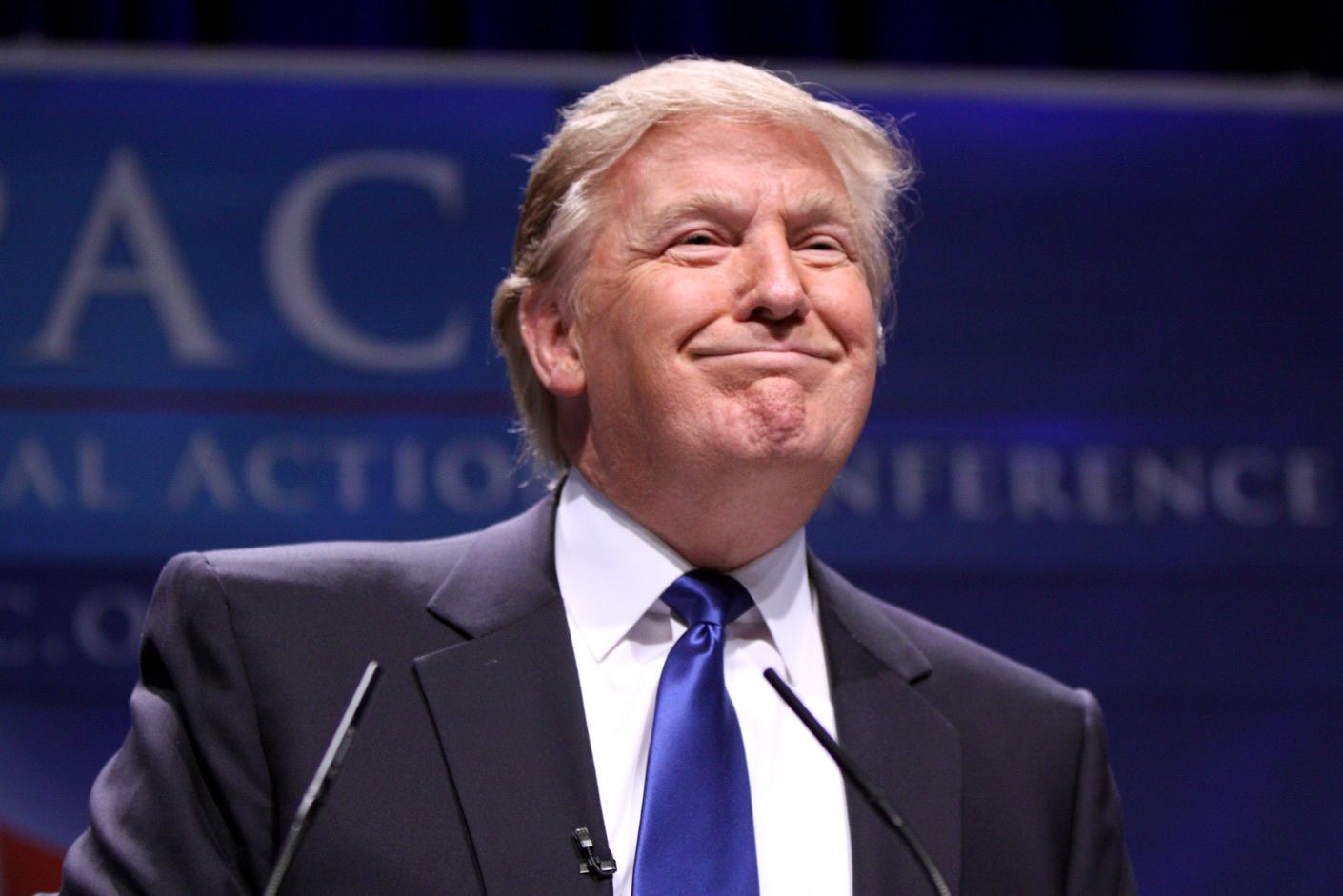 - USD hits ropes amid rout in the U.S. bond and stock markets.

The U.S. Dollar was on the ropes Thursday after carnage in the American bond market spilled over into the stock market, undermining the outlook for equity prices and corporate earnings growth as well as the economic divergence story that has driven the greenback in its 2018 rally.

U.S. 10-year Treasury yields hit a fresh seven-year high while bond prices fell in the Wednesday session after demand in an auction for $23 billion of new debt fell to its lowest level since February. The bid-to-cover ratio came in at 2.4.

Traders may also have taken flight due to President Donald Trump's latest criticism of the Federal Reserve (Fed), which has raised fears over the institution's independence. 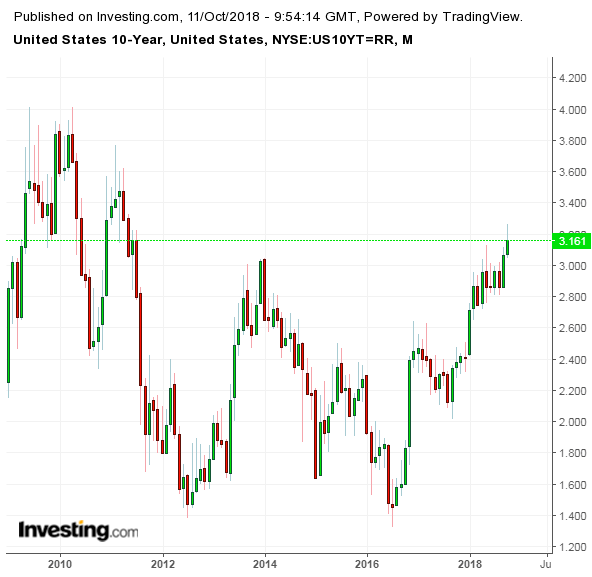 Trump said on Wednesday; "I like to see low interest rates. The Fed is doing what they think is necessary, but I don’t like what they’re doing. Because we have inflation really checked, and we have a lot of good things happening...I think we don’t have to go as fast...I have not spoken to him [Jerome Powell] about that"

Landmark levels for yields are significant for the stock market, which had risen more than 14% in the 12 months to Wednesday, because of the impact they have on the financial models analysts use to determine "fair value" and targets for share prices.

The NIKKEI 225 fell close to 5% in Japan overnight, in lockstep with China's Shanghai Composite index. Both performances followed closely behind a near-4% loss for the Dow and S&P500 indices in New York on Wednesday. 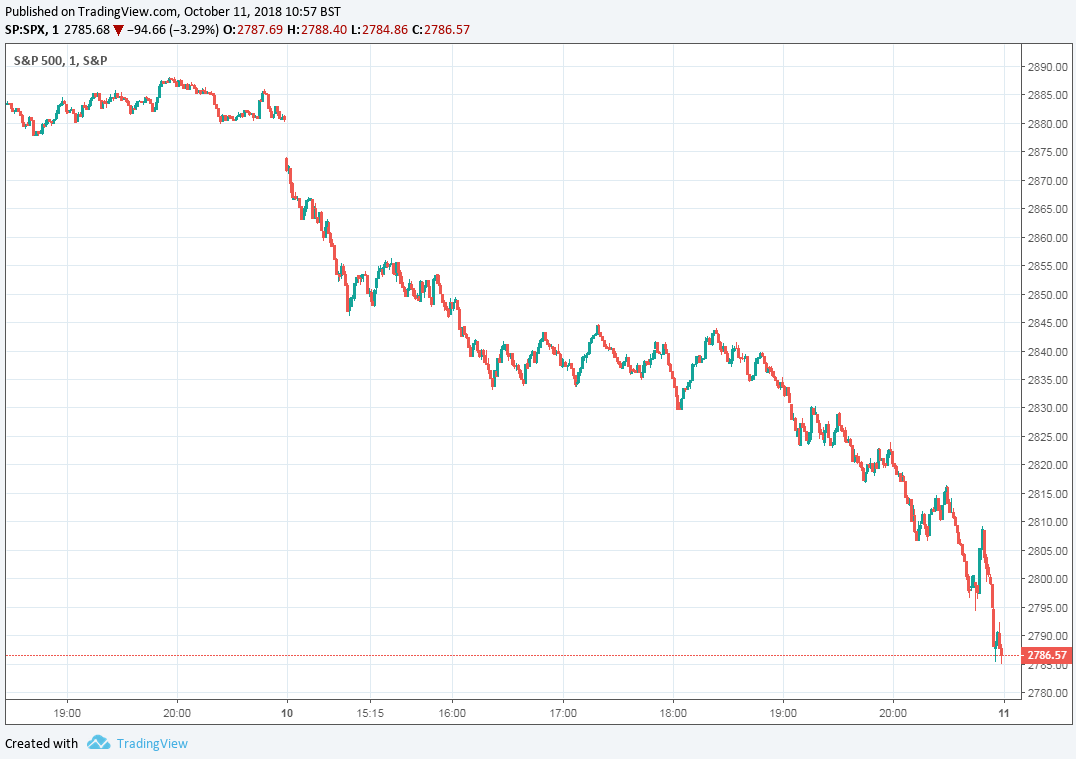 Higher yields raise the risk-free rate that is embedded within the discount rates used to value shares, which then compresses the risk premium offered to investors holding equities and eventually raises the discount rate itself. Both effects command a fall in share prices and therefore, stock markets.

With stock and bond markets in synchronous decline due to the above double-barrelled shock, confidence in the U.S. Dollar appears to have been dented.

The stock market rally has been flagged repeatedly by Trump as a significant illustration of America's 2018 economic outperformance of competitors and this year's Dollar rally was built on that "economic divergence" narrative.

“If yields in the US continue to rise significantly, this could also begin to impact the wider economy through higher debt refinancing costs, as well as impacting the housing market (banks charge higher interest rates for mortgages when Treasury yields rise)," Absolon warns.

The U.S. Dollar index was quoted 0.14% lower at 95.32 during early trading in London Thursday after having fallen from 95.64 since Wednesday's opening bell in New York.

The Dollar index previously converted a 4% first-quarter decline into a near-4% 2018 gain during the seven months to October. 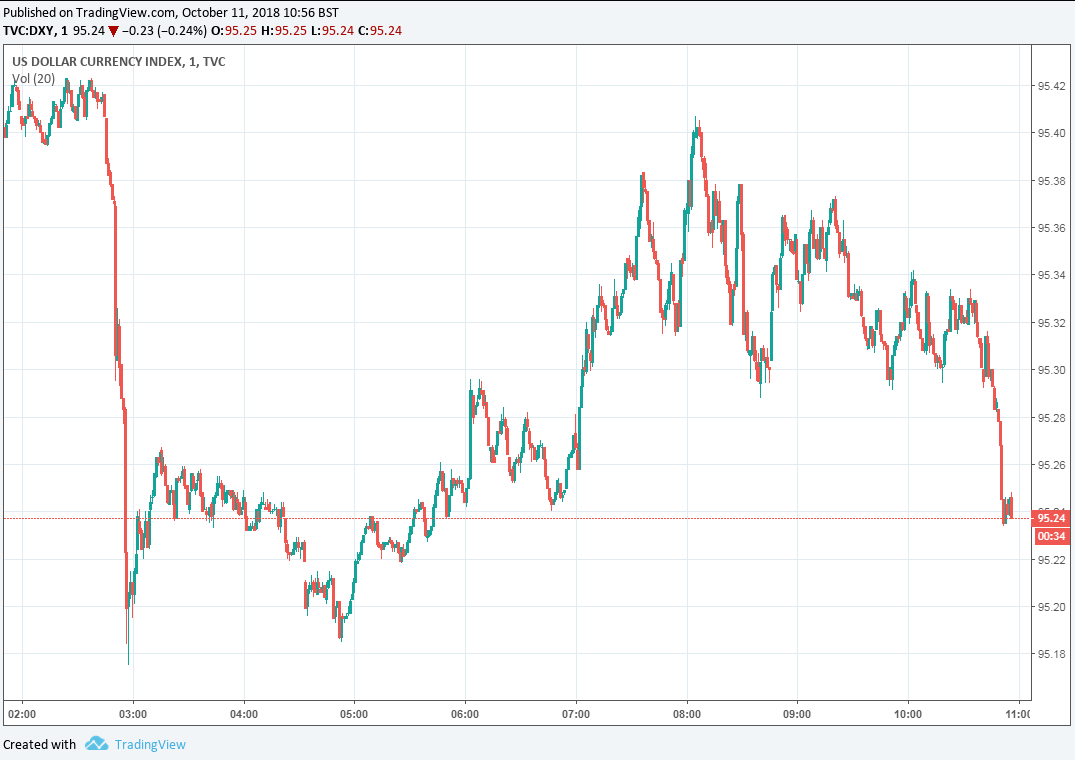 Thursday's price action comes just hours ahead of inflation figures for September, which could spark an escalation of the earlier carnage if they show U.S. consumer price pressures mounting further during the recent month.

Increasing inflation pressures would simply add to the case for additional interest rate rises from the Federal Reserve, which would then put more pressure on bond prices while lifting yields and potentially creating more pandemonium in the stock market. Inflation data will be released at 13:30.

The Fed has raised interest rates eight times since the end of 2015, including twice in 2018, taking the Fed Funds rate range to between 2% and 2.25%.

Economists say the Fed is likely to lift rates so the top end of that range hits 3.25% around the end of 2019.