Following a bout of strength in the NZD exchange rate complex we consider whether further upside can be expected or whether coming days will see the currency retreat.

The New Zealand dollar enters the new month in bullish form having recorded strong gains against both the US dollar and pound sterling over recent days.

Note that the Australian dollar and South African rand have advanced by similar amounts - the move higher in NZD could well be a move higher in sympathy with the broader commodity currency complex.

The move higher in NZD could be a sympathy vote but we must not ignore the fact that the New Zealand dollar has been buoyed of late thanks to a market that continues to pare back expectations of another RBNZ cut on June 8.

Markets are now seeing less than a 25% probability of a June cut thanks in part to a solid rebound in business confidence for a second month.

Sentiment advanced to 11.3; we have not seen a higher overall reading since 23.0 in December.

Yet while business confidence advanced the slide in the activity outlook and fall in inflation expectations should not be ignored.

“While the retreat in the activity outlook merely sees the series retreat back to the three month moving average sentiment remains comfortably below the long run average. Additionally inflation expectations retreated back to 1.39% from 1.42%,” says Jeremy Stretch at CIBC Markets.

Subdued inflation expectations are likely to remain a concern for the RBNZ and we would not expect the NZ dollar to find indefinite support from retreating expectations on the next RBNZ interest rate cut.

Indeed, as long as inflation remains subdued we would not expect the NZD to find any sustainable long-term strength.

By the same token, for sustained declines in the NZD markets will want to see sustained cuts to interest rates, but cutting interest rates at the central bank is likely to continue pushing house lending costs lower and thus stimulate prices.

“Together with expected further OCR cuts, we estimate there is another circa 35bps of easing still in the pipeline out to the middle of next year,” say ANZ Research on the prospect of lower interest rates.

CIBC’s Stretch says should we see any evidence of a moderation in house price growth expect that to underpin analyst expectations of additional RBNZ action.

The New Zealand Dollar Remains an Attractive ‘Sell on Strength’

The consolidation that had been holding firm for a couple of weeks, broke down on Friday, in the wake of the Yellen comments that supported the prospect of a move towards the next US rate hike.

Perry cites as evidence a move in the daily RSI which has also pushed below 40 for the lowest since the end of January, a sign that momentum is slipping.

Further, Stochastics are firmly negatively configured and the MACD lines are now decisively below zero.

“The hourly chart shows a trend lower over the past couple of weeks and that today’s rally is another chance to sell,” says Perry.

If the sequence of lower highs continues, the next test is the late March low at $0.6667 whilst the outlook continues to suggest that a move towards the double top pattern implied target (which formed at the beginning of May), which suggests continued pressure on the key February/March lows around $0.6560. 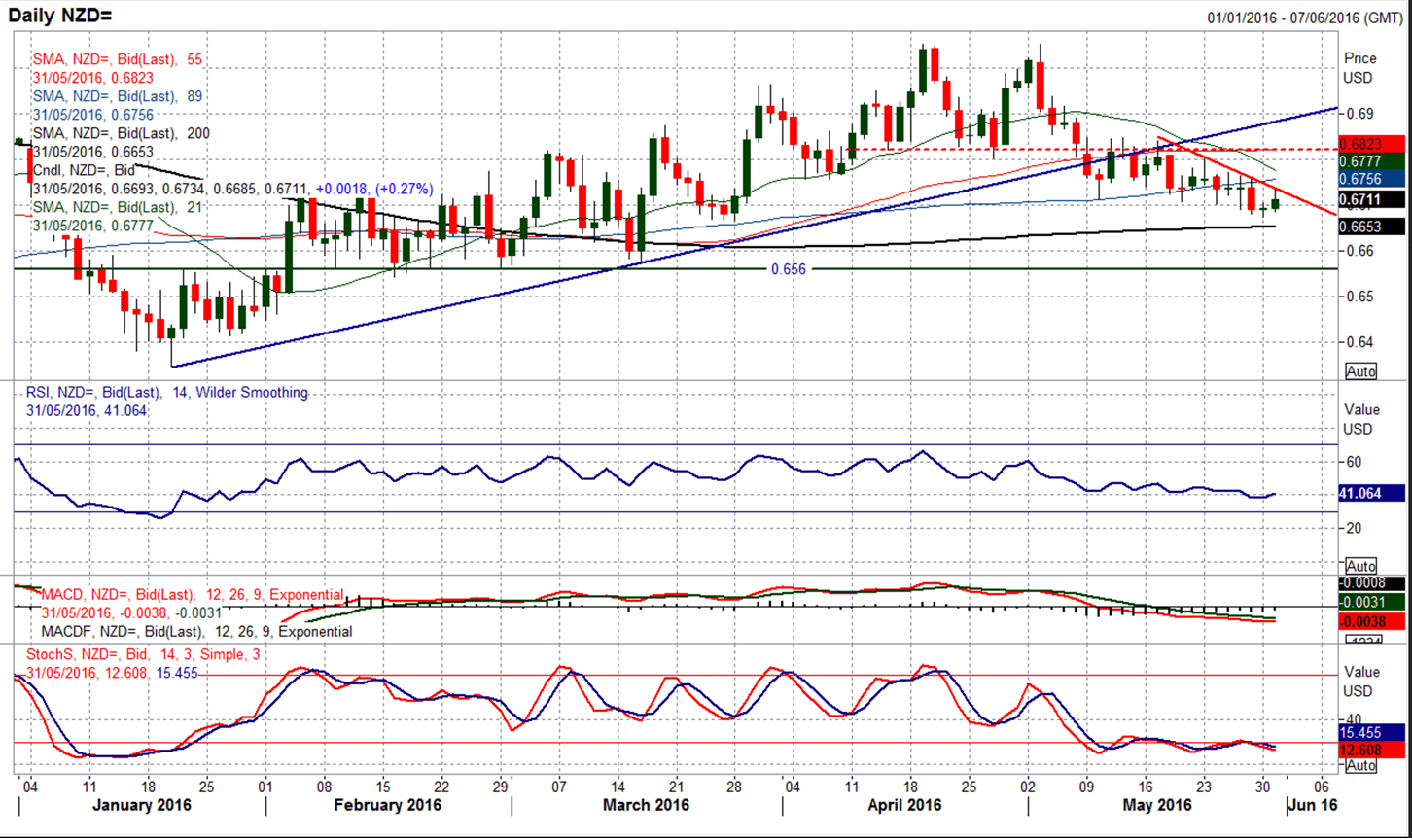 Perry notes that intraday hourly chart shows a band of resistance around $0.6730/$0.6770 as an ideal sell zone, with the bulls only finding any real near term respite above the resistance at $0.6805.

Agreeing with Perry’s strategic approach to the kiwi dollar is CIBC’s Jeremy Stretch who has his eyes on weakness against both the US and Australian dollar:

We will monitor the NZD to USD exchange rate over coming days for evidence that the current rally in the kiwi currency is a blip and that those brave enough to sell into the strength had indeed made the right decision.