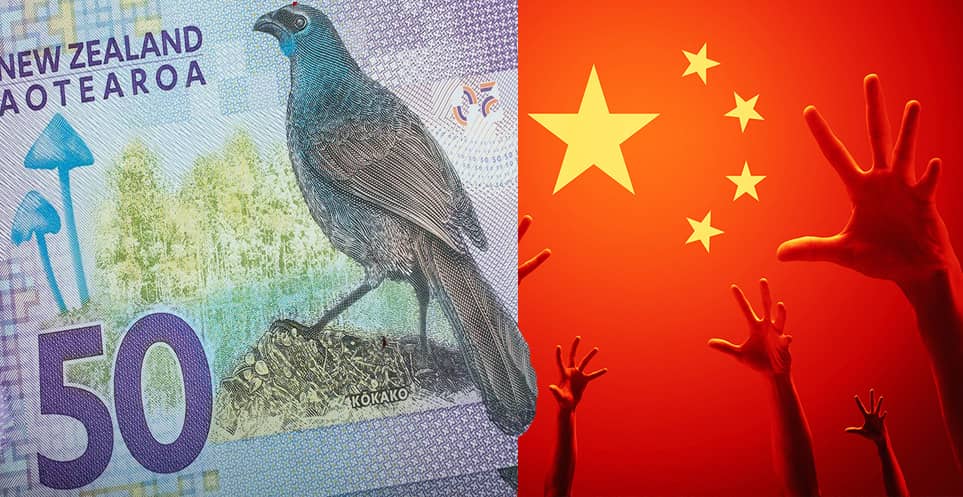 The Pound to New Zealand Dollar exchange rate (GBP/NZD) starts the new week higher amidst a selloff Asian and Australian currencies linked to the weekend developments in China, but the prospect of a material advance in the pair remains limited.

This is because GBP/NZD has been locked in a sideways trend throughout November amidst a period of outperformance for both currencies that ensures neither has been able to establish an edge over the other.

But as the month nears its end the Pound could find itself at an advantage after the New Zealand and Australian Dollars were put on a softer footing after investors reacted to news of protests in China where authorities are again restricting movement in response to rising Covid cases.

"Anti-Covid-Zero protests in China... have punctured some of the re-opening optimism and hurt risk-sensitive currencies everywhere, but AUD, NZD and KRW in particular," says Kit Juckes, head of FX strategy and research at Société Générale.

Protests were reported across China over the weekend and continued into Monday amidst signs another round of strict lockdowns beckoned, an unusual occurrence for a typically compliant population.

"The situation in China has upset financial markets in the Asia-Pacific region, with concerns growing about the impact on growth in the world's second-largest economy," reports the BBC's Suranjana Tewari.

Chinese stocks ended lower on Monday with the CSI 300 Index and Hong Kong's Hang Seng Index both down over 1%, the onshore yuan weakened 0.5% against the dollar, having plunged more than 1% at the open, the most since May.

"Risk assets took a knock at the start of the week as worries about instability in China and how the country’s unyielding zero-Covid policy might further blight the outlook led investors to search for safety. Anti-lockdown protests started spreading after a deadly fire in Xinjiang last Thursday where residents were reportedly unable to escape the residential complex due to the harsh Covid restrictions," says Raffi Boyadjian, Lead Investment Analyst at XM.com.

The New Zealand Dollar will remain prone to broader investor sentiment this week, particularly that related to China, given the light economic and event calendar.

This is because New Zealand is a small and open economy whose main trade partner is China, therefore demand from the world's second-largest economy can impact heavily on overall economic performance and financial flows.

The Kiwi and Aussie Dollars are considered by global investors to be two liquid proxies for exposure to China, therefore news of social unrest leaves the two antipodeans exposed to weakness.

The GBP/NZD exchange rate starts the new week nearly half a percent higher at 1.9403, taking bank transfer rates to around 1.8863 and those at competitive payment providers to around 1.9348.

The exchange rate has been restricted to a tight range between 1.92 and 1.95 throughout the course of November, but more than 75% of the action occurred between 1.9260 and 1.94, a remarkably tight corridor.

The nudge higher at the start of the new week suggests the Pound could however hold the advantage as long as sentiment pertaining to China remains poor.

"The protests erupted further over the weekend, turning into nationwide demonstrations against the government’s handling of the pandemic as anger boiled over. It is yet unclear how authorities plan to quell the ever-growing unrest given their unprecedented scale, or just how much more widespread these protests will become. But this is uncharted territory for President Xi Jinping and the Communist Party, and it is making the markets nervous," says Boyadjian.

The New Zealand Dollar endured a soft spell of performance during the middle part of 2022 but has since appreciated once more.

Gains were seen in October as markets reacted to rumours that China would relax its zero-Covid approach, with sharp gains seen towards the end of the month as some restrictions were duly loosened.

But this source of support is truly at an end and it might only be in spring that a more durable reopening of China is announced, at which point the New Zealand Dollar would be considered a major winner.

Further near-term strength has come from the Reserve Bank of New Zealand (RBNZ) which has had to concede to further interest rate hikes owing to the pervasiveness of domestic inflationary pressures and wage data.

The New Zealand Dollar rallied last week aided by a decision by the RBNZ to hike interest rates 75 basis points, a move that was in line with analyst expectations.

However, the rally was more a result of the surprise "of the extent to which the RBNZ upped its views on inflation pressures and how hard the RBNZ needs to lean against them," says economist Nick Tuffley at ASB.

The RBNZ’s latest Monetary Policy Statement (MPS) forecasts indicate a 5.5% OCR would be necessary to get inflation under control.

That is up from a 4.1% peak the RBNZ forecast in the August MPS.

"Unsurprisingly, interest rates and the NZD rose on the day," says Tuffley.

The NZD's recent outperformance does however also leave it at risk of a near-term pullback from overbought conditions, according to one analyst.

"While the Kiwi has high interest rates in its corner, it has come a long way very quickly," says David Croy, Strategist at ANZ. "It feels like a significant data surprise one way or the other is needed to either extend the Kiwi’s rally or see it go lower again."

Croy is looking for GBP/NZD to respect its recent ranges until mid-December when the Bank of England delivers its next policy decision, where markets anticipate a 50 basis point hike.

Further guidance for the Kiwi will this week be taken from the U.S. where some important data releases are due.

Friday's labour market statistics will be of particular importance: a weaker-than-expected reading would underpin the assumption the Fed is in the tail-end of its rate hiking cycle, which is supportive for global assets, the New Zealand Dollar included.

A stronger reading would refocus minds on the need for the Fed to continue its rate hiking cycle, which will ultimately push the world's largest economy into recession in 2023 and hurt pro-cyclical currencies such as the Kiwi.

There are no major releases out of the UK this week and the Pound will also rely on external factors to determine whether its recent upward momentum can be sustained.

It is therefore the macro picture that will be in charge of GBP/NZD this week.