The Pound to New Zealand Dollar exchange rate (GBP/NZD) has been trading sideways since March but of late price action has become distinctly heavier and a probe of the 2022 lows near 1.88 could occur.

As the above shows last week's test of this level encountered significant support and a bounce ensued: 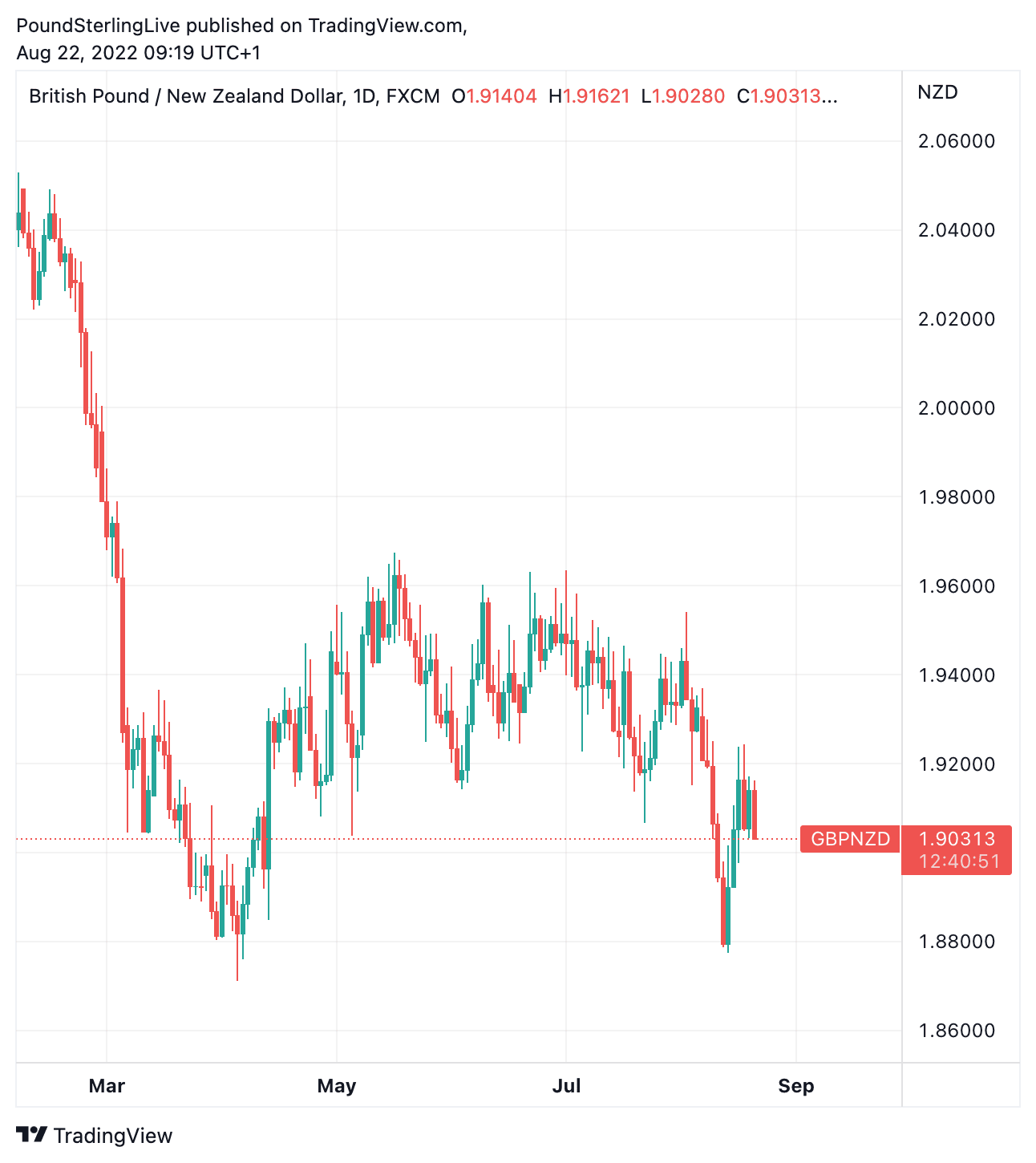 Above: GBP/NZD at daily intervals showing choppy sideways action that includes probes of the lows. Set your FX rate alert here to prepare for any developments.

A break below 1.88 would be quite difficult to achieve without a significant increase in GBP selling impetus, which could ultimately depend on what happens next in GBP/USD.

The Pound's generalised decline is significant and suggests investors have lost confidence in the UK economy given the ongoing surge in inflation amidst soaring energy prices.

“What is notable this week is the complete lack of support for the pound in circumstances of the huge move in the rates market. Stronger than expected wage growth on Tuesday, annual CPI breaking above 10% on Wednesday and stronger than expected retail sales data today have all helped fuel this move higher in rates,” says Lee Hardman, a currency analyst at MUFG, writing in a Friday research briefing.

As a result the GBP/USD exchange rate is under pressure with multi-year lows being probed; will GBP/USD breakdown this week or can support be found? 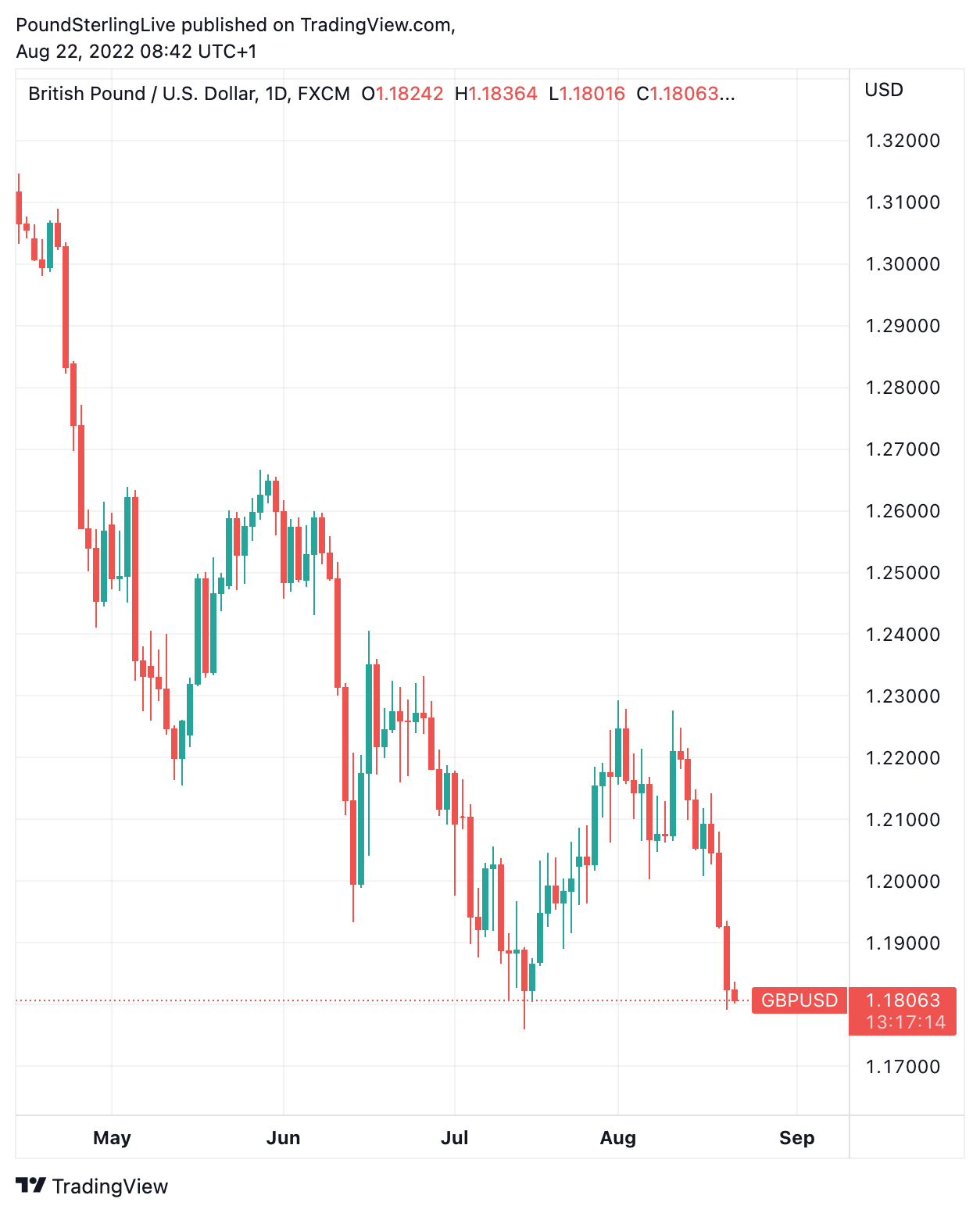 Above: GBP/USD at daily intervals showing a major breakdown is at hand. This could determine future action in GBP/NZD.

Pound Sterling Live's James Skinner finds GBP/USD would sustain deeper losses in the days ahead if a busy U.S. economic calendar or commentary from Federal Reserve officials enable U.S. bond yields and the Dollar to build further on a nascent comeback.

“FOMC Chair Powell is scheduled to speak on Friday. His speech is the first since the FOMC’s policy meeting in late July. We expect Powell to deliver a hawkish message about inflation in line with recent comments from other FOMC officials. There is scope for market pricing for the Funds rate to shift higher, supporting the USD," says Joseph Capurso, head of international economics at Commonwealth Bank of Australia.

Weakness in GBP/USD should reflect in a heavy GBP/NZD.

The U.S. Dollar is meanwhile also pushing the New Zealand Dollar lower, but crucially the pressures are less intense than those seen in GBP/USD: 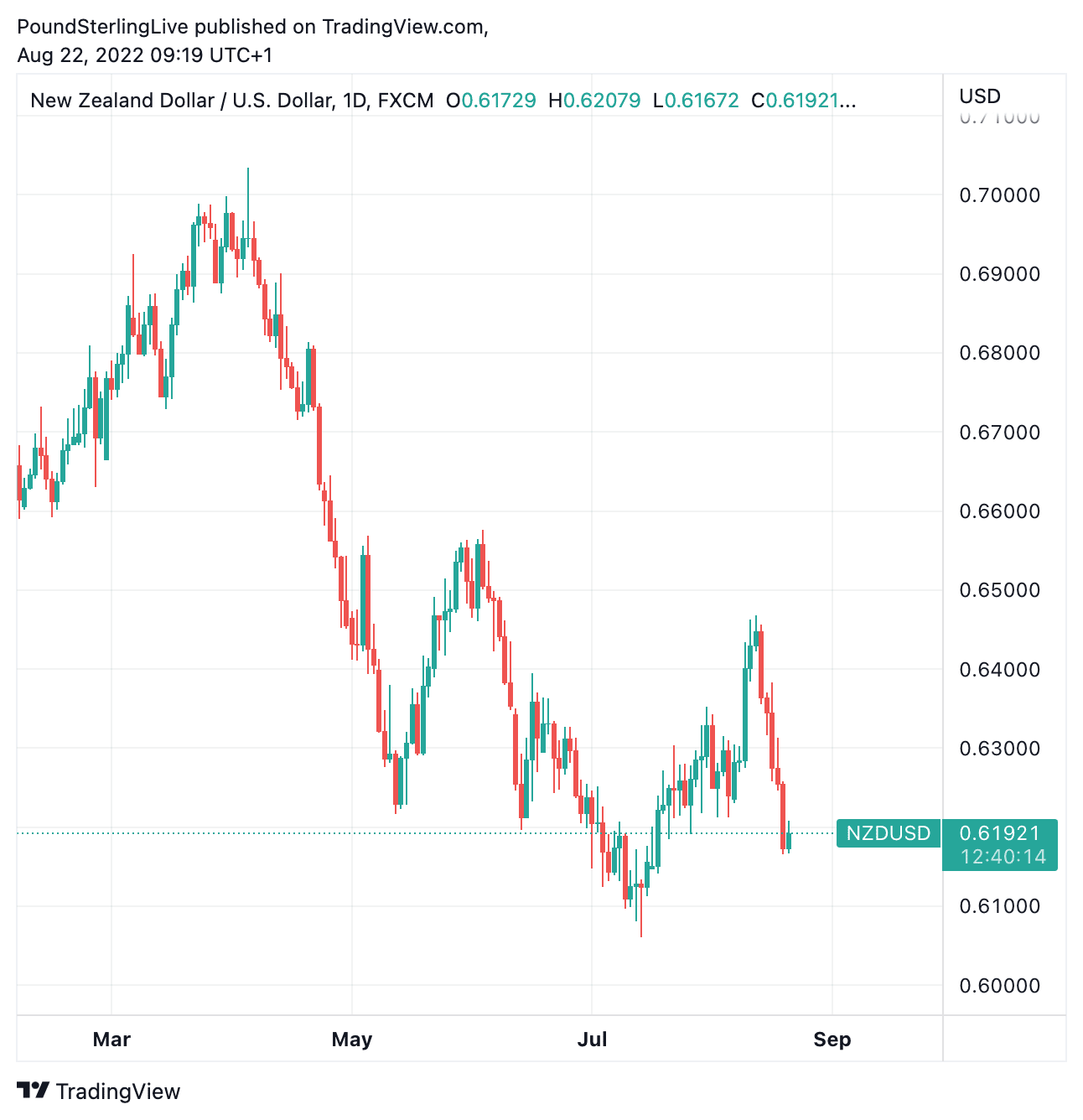 Above: NZD/USD at daily intervals. ANZ sees further near-term weakness and a potential turnaround towards year-end.

If GBP/USD's decline outpaces that of NZD/USD then GBP/NZD would remain under pressure.

"The Kiwi continued its journey south on Friday night as the USD gained ground. A risk-off vibe/flight to safety may keep the USD supported," says David Croy, Strategist at ANZ.

Strategists at Westpac say there is the potential for the New Zealand Dollar to extend lower during the next few days.

"Markets appear biased towards expecting a hawkish posture from the Fed at Friday’s Jackson Hole gathering, which should be USD supportive. And global sentiment remains fragile. But by year end, if sentiment stabilises, there is potential for the NZD to rise," says strategist Robert Rennie at Westpac in Sydney.

There is little on the New Zealand domestic calendar to worry markets over coming days, meaning the U.S. Dollar and developments in China will be key.

"Export orders for manufacturers are dropping, and COVID-zero uncertainty is not helping. China’s consumers are by far the most important customer for New Zealand’s exporters. While food is of course a necessity, New Zealand aims for the premium end, where returns are higher – but demand also more elastic," says Sharon Zollner, Chief Economist at ANZ.

The New Zealand Dollar started the previous week softer after Chinese industrial production was reported to have grown 3.8% year-on-year in July, underwhelming against the 4.6% expected by markets.

Retail sales and concerning data showing youth unemployment had topped 20% were also cause for concern.

China looks to be the single most important source of potential weakness for the Kiwi with any negative headlines offering GBP/NZD some relief, but further attempts to stabilise growth by authorities would likely support the Kiwi.