The key event for the New Zealand Dollar this week is the Reserve Bank of New Zealand's policy decision which could trigger some volatility in midweek trade, although until then it is global risk sentiment that could remain the major driver.

The New Zealand Dollar is jostling for the position of the days best performing major currency as it registers advances against all its G10 peers in line with improved investor sentiment, reflected in rising global stock markets.

"Appetite for risk has been sparked by the US President’s announcement that trade tariffs imposed on China by the previous Trump administration will be discussed. Investors see this as a possible de-escalation of the trade war between the two economic superpowers, and this has revived trading optimism towards riskier assets," says Pierre Veyret, Technical analyst at ActivTrades.

A further sentiment boost comes on news Shanghai continues to ease restrictions and a broader reopening for one of the world's largest export hubs is due next week. 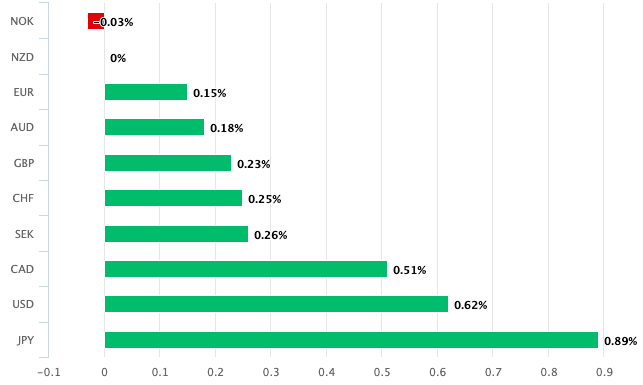 Above: NZD performance on May 23.

But it will be the Reserve Bank of New Zealand (RBNZ) that provides the home grown excitement for currency traders this week.

"The RBNZ meeting on Wednesday is the week’s major catalyst for NZD movement," says Chris Tennent-Brown, Senior Economist at ASB.

"This week is likely to be more locally driven, with the RBNZ MPS the highlight. We expect another outsized 50bp hike; sounds dramatic, but it’s almost fully priced into market expectations," says Brian Martin, an economist at ANZ.

Markets anticipate a further 184 basis points of hikes from the RBNZ in 2022 as it continues with a 'front loaded' approach to hiking rates: i.e. moving aggressively early on in the cycle to tame inflation expectations.

"A constructive MPS this week may risk this cross popping to the topside," says Martin, referencing NZD/GBP.

The New Zealand Dollar has risen half a percent against Sterling over the past week and NZD/GBP is a further 0.40% stronger on Monday at 0.5146.

The New Zealand to U.S. Dollar exchange rate is meanwhile three quarters of a percent higher at 0.6468.

Richard Franulovich, Head of FX Strategy at Westpac, says there is the potential for further gains above 0.6415 from here.

"The RBNZ MPS is on Wednesday and is expected to deliver a 50bp hike and a higher OCR track. Our multi-month outlook remains unchanged: bullish NZD, with potential for 0.7000 by year end as the strong commodity price trend reasserts and Fed pricing peaks," says Franulovich.

A near majority of investment bank analysts are expecting another 50 basis point hike from the RBNZ as the central bank seeks to get on top of inflation.

Once the rate hits 2.0% the RBNZ could then opt to raise in 25 basis point increments once more.

Regardless, investors will be more concerned with whether the terminal rate moves higher from current levels following the RBNZ's policy update.

The terminal rate is where the OCR ends up when the RBNZ ceases hiking and it is therefore a significant level for money markets.

The higher the terminal OCR the more supportive of the NZ Dollar it becomes. 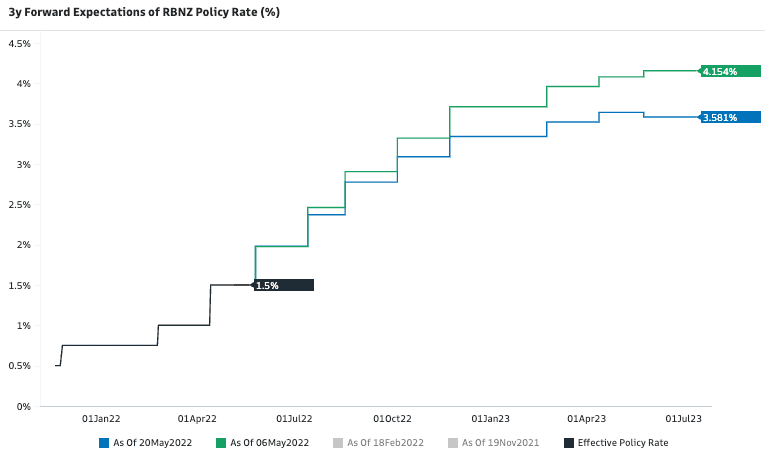 It is this dip in the terminal rate expectation that can potentially help explain part of the NZ Dollar's underperformance for much of May.

Should the RBNZ guide that terminal rate higher again the NZD could find support.

Tennent-Brown says the RBNZ will deliver a "double-double" on Wednesday: a second consecutive 50bps hike to take the OCR to 2.00%.

"This outcome is close to fully priced by financial markets. What is much less certain is what the RBNZ does with its interest rate forecasts and forward guidance. This is what the market reaction will be driven by," says Tennent-Brown.